There are so many versions of this story. A motley crew of ragtag ragamuffins, fallen from grace, perhaps a little elderly, are called to undertake a suicidal mission in the name of regained honor. The crew usually ranges from seven to twelve members, and bandits or Nazis may be involved. It goes by various names: The Seven Samurai, The Magnificent Seven, The Dirty Dozen, and now, finally and gloriously, China Gate. 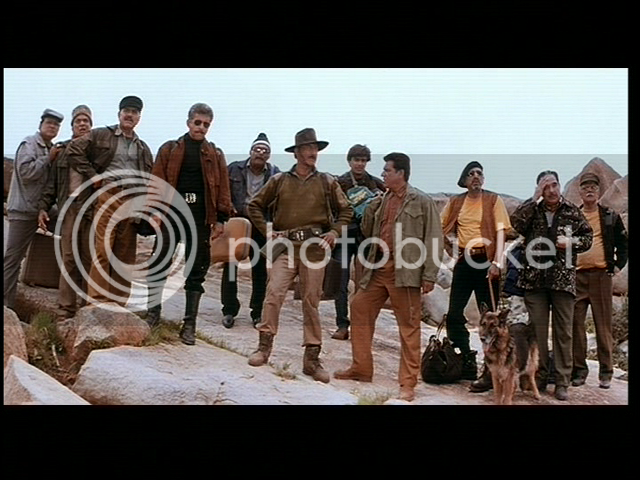 I count eleven. Is Twelve the dog?

Well, if you've seen one of these movies (and hopefully you saw Kurosawa's Seven Samurai), you've seen them all. There's the Stoic Leader, the Hothead, the Young One, the Comic Relief. There are melodramatic moments where the past is dragged out, there is no help from the outside and much tension on the inside. Most of the characters go out in a blazing glory during the final battle scene - if they don't just all blow up together - and usually it's our favorite character who dies first or most epically.

But let's be thorough. Colonel Puri #1 (Om Puri) decides he can't take the shame of being a disgraced soldier anymore, and the only way he can cope is by killing himself. But lo! A young, distressed woman barges into his home with a horror story involving her father (a noble but sadly deceased police officer) and some savage bandits out in Eastcabum Nowhere, India. Won't Col. Puri help, pleeeeaze? Of course he will, it's something to live for. And dare he hope for it, that fleeting glimpse, that taste of... honor?! GASP. Col. Puri goes for it, calling up all his old army buddies. These include ten other balding, soft-around-the-middle men ranging from 45 to 65 years of age. Colonel Puri #2 (Amrish Puri) is the authoritarian father figure with a shaved head and bad ass. Major Gurung (Danny Dezongpa) is a hard-nosed ranger type who always walks around in Crocodile Dundee gear. Major Gupta (Kulbhushan Kharbanda) is a businessman. But wait, someone important and very famous is missing! Of course, it's Major Sarfaraz Khan (Naseeruddin Shah), who's having trouble selling his garage (he's strapped for cash thanks to an upcoming Big Event). Once the crew is assembled, and a dog and Random Young Man beg to join in, they ride off to Eastcabum on their mission: Mission Kill Bandit Save Town Regain Honor!

The rest is predictable. Young Man and the distressed, young woman fall in love. The gang of ancient soldiers bumble and fuss, not achieving very much, while Major Hard-ass tries to whip them into shape. The bandits run around, villagers scream, vultures endlessly circle. After three hours and NO SONGS, we have our first casualty, and the movie's interest value drops by one-fourth. Then the grand showdown in town, and... well, I'll let you watch the movie to see whether the bandits really are defeated this time. 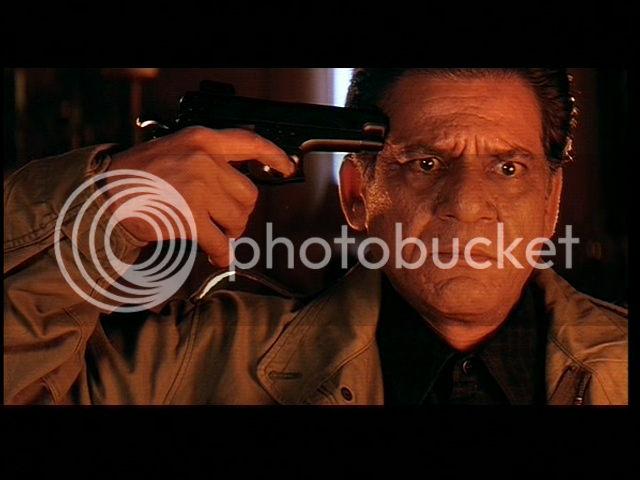 No singing for three hours?! 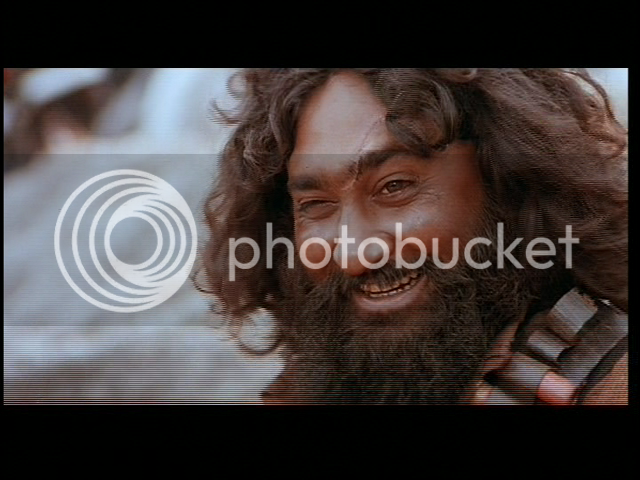 This is Jagira, the bandit leader and villain. He talks to vulture. Nice curls.

The major pro of this movie is the fact that there are so many major pros in it. Naseer, Om, Amrish, Kulbhushan. All our old favorites, it filled us here at the PPCC with a warmth of familiarity and affectionate loyalty. Sure, if this was the only movie we had seen with Naseer, Om, Amrish or Kulbhushan, we at the PPCC would probably not be fans of any of them. But thanks to Masoom, Sparsh, Chakra, and even that punk-ass Orientalist gob, we were just happy to see them again, all together, so happy (if briefly). Oh joy, we could bask in the glow of Om's beautiful voice, Naseer's lovely emo, Amrish thinking we're all fools. Such a happy celluloid family!

Another major pro of the movie is that it's an action movie, and Bollyaction brings video game sound effects and many indiscriminate explosions. So much fun.

Now onto the major drawbacks. First, there is no song except the mega-famous Chamma Chamma, and that comes far too late in the film when we at the PPCC had already guessed what grim plot twist was ahead. Second, although we are heathens sometimes and actually thought The Seven Samurai was just a bit overlong, this movie still made us realize how many galaxies away Kurosawa's film was in terms of emotional depth. China Gate opens with the lines: "Our humble tribute to Akira Kurosawa", and we could not help but feel a little bad that it was, indeed, such a very humble tribute. 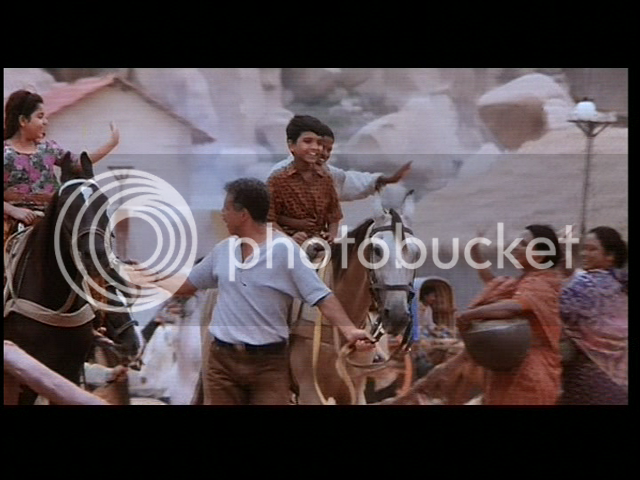 Naseer leads children on pony rides. His character is the Angry (Older) Man who's good with kids. Do I sense shades of Toshiro's character in Seven Samurai? Yes indeedy, they just transplanted the Young Man's personality onto the Older Hothead for this one.

The best part of the movie, for us, was actually the fascinating tension between Col. Puri #2 (Amrish) and Major Khan (Naseer). Although this may be painfully obvious and even a little trite to South Asian viewers, it took us a few moments to go, "Hey, wait, Puri is a Hindu name, Khan is a Muslim name... oooh, I get it now." (Also the fact that Puri is indeed Puri and Khan is played by a Shah, it's so fascinatingly meta. Praise the meta!) Yes, China Gate decides to tackle the Big Problem of Hindu-Muslim relations as a subplot. When Col. Puri and Major Khan tearfully reconcile after pouring their hearts out about lost family members to anti-other-religion rioting, we at the PPCC were moved (and a little surprised). When, in the next scene, Major Khan affectionately corrects Col. Puri's pronunciation of a Muslim dish, we even felt a tear approaching.

Finally, some singing! Some dancing! Even Amrish cannot help but join in.
Posted by a ppcc representative at 16:17

I haven't seen this in a long time, but wasn't Om Puri's character named Krishnakant?