Some movies can be summed up in a single scene. For Ismail Merchant's In Custody, that scene is when the stodgy professor-by-day Urdu-lover-by-night Deven (Om Puri) is cleaning up the vomit of his idol - the aging Urdu poet, Nur (Shashi Kapoor) - using some sheets of the latter's poetry. For a moment, the moonlight catches on a couplet and Deven is astounded by the gleaming, beautiful words. But then some puke drips into his palm, and he's pulled straight back down into the horribly embarrassing, tragicomic reality. And there is your movie. 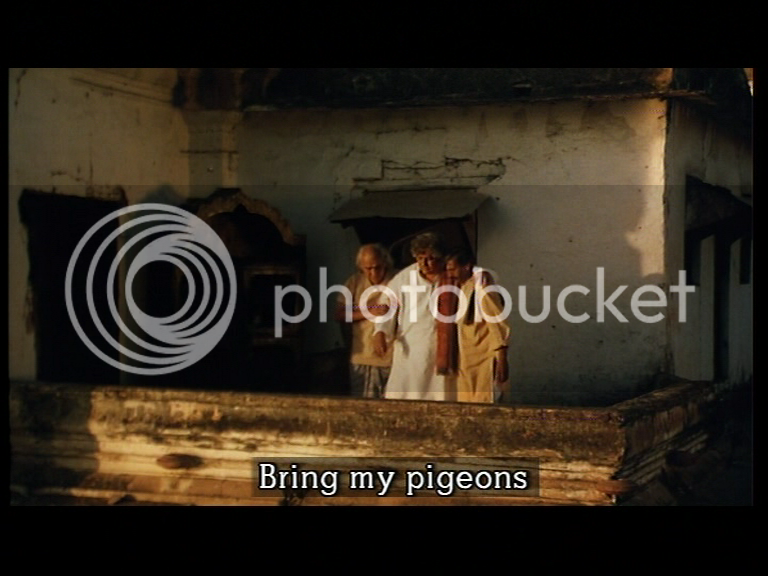 Did you hear the man? BRING HIM HIS PIDGEONS! 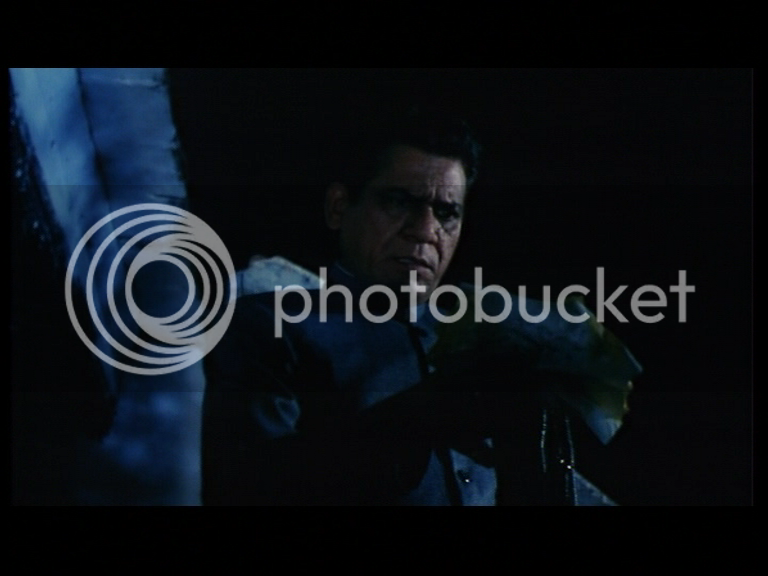 He's holding the vomit in this scene.

Let us call this our Sufi Spring. This spring, the spring of 2007, we at the PPCC have been lapping up Sufi poetry like a cheetah laps up water after winning the cheetah-human sprint. We've been sitting in libraries reading Mirza Ghalib's tragicomic, desperate letters out of a Delhi under siege, we've been learning the words and lip-synching to our favorite ghazals from Umrao Jaan, we've been slowly making our way through Nusrat Fateh Ali Khan's entire collection over at MusicIndiaOnline (our current favorite: Jhule Jule Lal). We have been IN IT, MA-AN. We have been all about Sufi, and particularly Urdu Sufi, poetry.

So In Custody was very relevant. The film follows a Hindi professor, Deven (the Strangely Attractive Om Puri), who secretly loves Urdu poetry and is presented with the opportunity to tape-record one of the last great masters, Nur Shahjehanabadi (the aging legend of Indian cinema, Shashi Kapoor). Things go awry in many ways: Deven doesn't have enough money and keeps having to ask the university for cash; Nur is frequently wasted and/or grumpy; Nur's two wives are alternatively insane and she-demonic. The tape gets tangled. Nur's freeloading friends show up and act obnoxious. Woe. 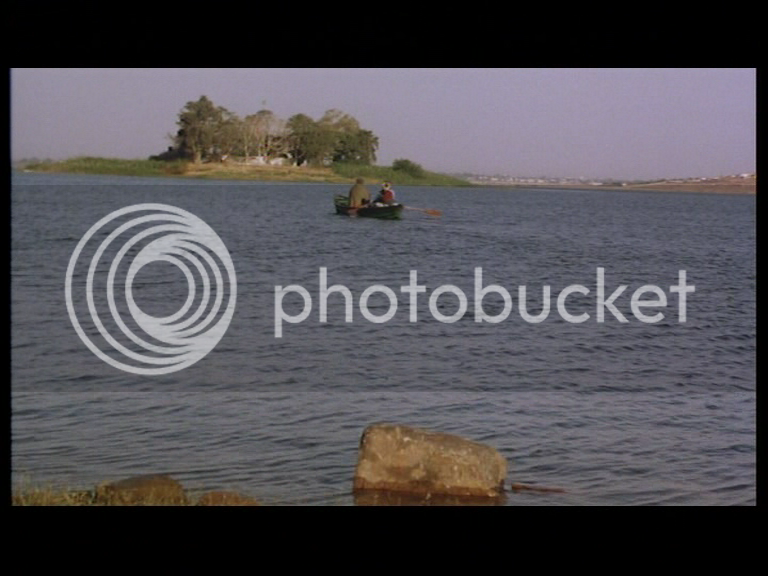 Fat man in a little boat. Much like life. 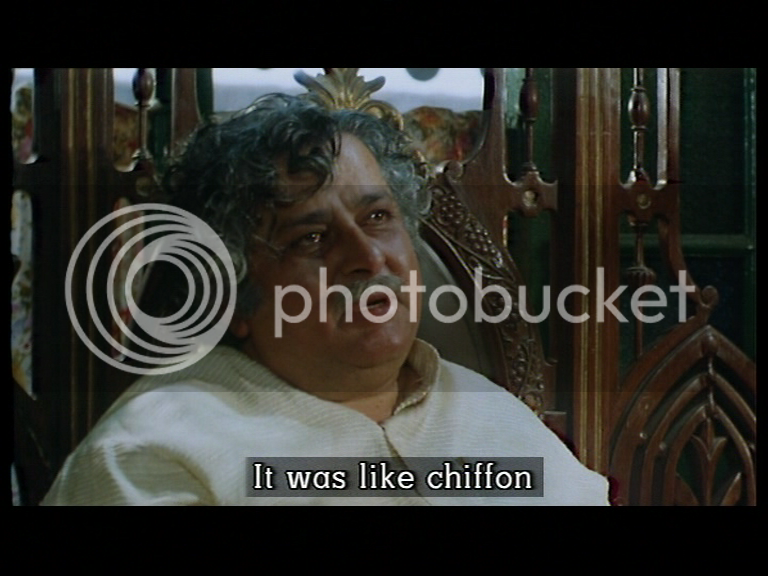 It's difficult to find any hope in this movie. Urdu is presented as a dying language, Urdu poetry a dying artform degraded by too much wine and the false praises of philistines. In one scene, an ancient mansion is pulled down brick by brick to make way for "an apartment building with a cinema on the groundfloor". Meanwhile, Deven stands holding the last great transcript of Urdu poetry, a book which probably no one will ever read. The last scene is a funeral, the last ghazal a meditation on death and decay.

This sort of bleakness is something the great Mirza Ghalib would have appreciated, especially in his later years. Yes, the Naseeruddin Shah-starring Mirza Ghalib series is next on our To Watch list.

Being this is Merchant (of the Merchant-Ivory stamp), the direction is lovely. No melodrama or bombast, except for the kind that Oscar-voters like. Lots of pretty imagery - sunsets on glittering water, doves flying - it's all very symbolic in an easy, self-congratulatory way. The real meat of the movie for us PPCCers was in the characterizations: everyone presented is generally unlikable with moments of sympathetic lament. Om Puri's Deven is spineless, uptight and narrow - too beguiled by his poet-idol and unwilling to face reality (or take any blame!). For him, his "real" life - the wife, the university job - are just obstacles in the way of his Urdu love. Back away, philistines! Similarly, Shashi Kapoor's Nur is a tragic hangover of good days gone too far. Here is a poet of wine and women who's now been sunk by both. Shabana Azmi, who plays the second wife, has the complicated job of playing an insecure and ruthless she-demon. She-demon! Well done, though, this was a far cry from the gently melancholy Kavita of Sparsh or Mrs. Ice Queen from Masoom. 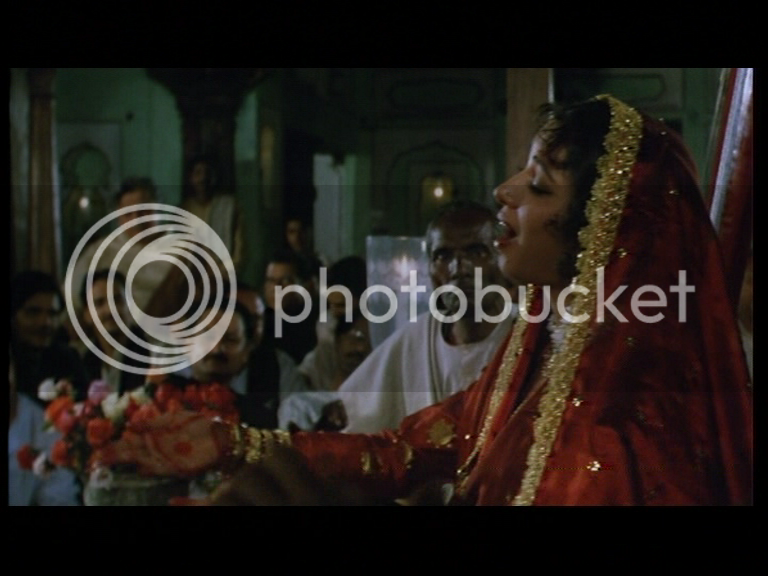 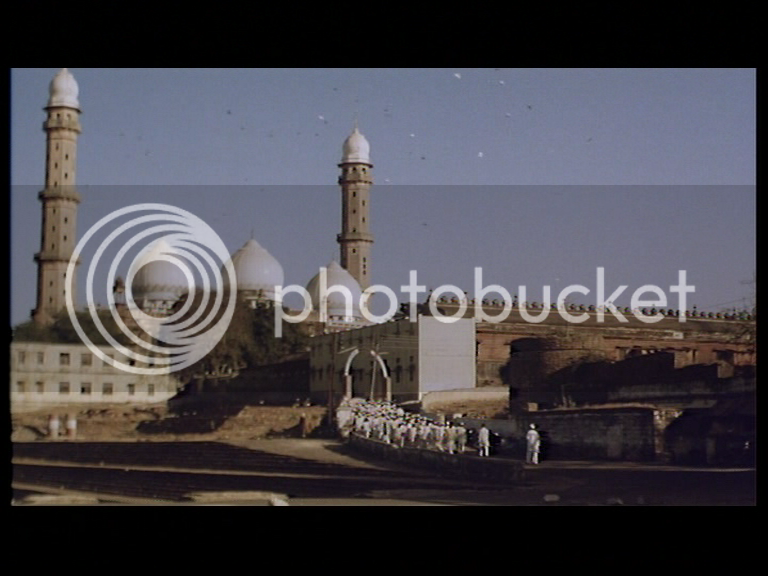 Because of all this emotional greyness, we at the PPCC were left disappointed and with our Sufi spirit a little crushed. This was the anti-glorifying of Urdu poetry, it was a funeral dirge for it. The only sparks of hope were in the sung ghazals, which were so lovely they reminded us why we be lovin' the Urdu poetry in the first place. 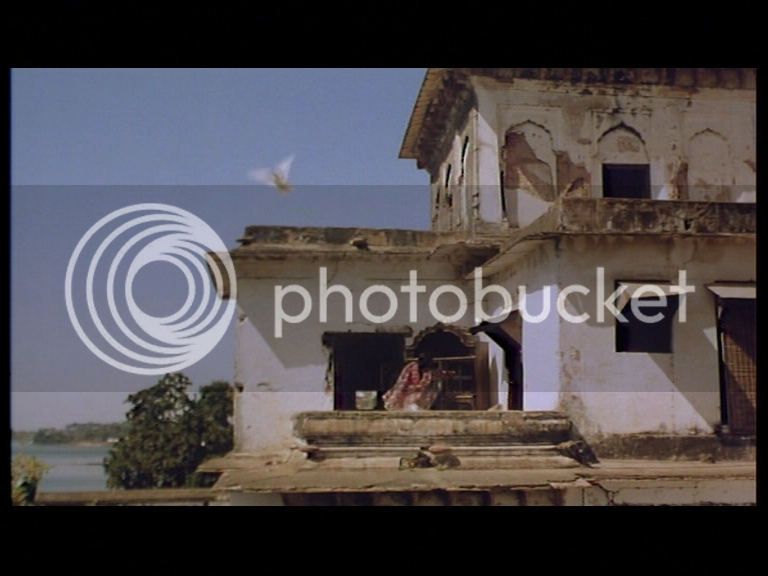 Fly away, my pidgeons! Be free!
Posted by a ppcc representative at 11:56