Entry #2 for the Amitabh Bachchan: No Mercy! Project 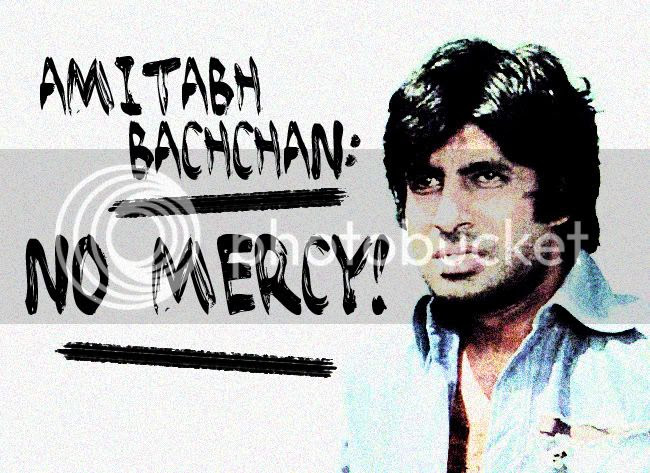 Don't think that just because we reviewed one of his golden oldies that we approve of Amitabh Bachchan. We still don't. We never, ever will. Sure, perhaps in 1978 the stars aligned in such a way to give his dark hair that extra sheen, his gangly elbows-knees look a certain appeal, his moustache an air of adolescent bravado. But that was one year, in the late 70s. And now is now. Now Amitabh is totally not appealing or cool or Big. And we must prove this to ourselves by compiling a video collection that showcases all his most unappealing moments.

Perhaps Amitabh went wrong when he cut his hair. That must have happened sometime in the 1980s. We admit the days of a mulleted Amitabh were golden days of joy and debauchery, but once he cut his hair and especially when he grew that beard, things went horribly, terribly wrong and he became that growly old man chasing after too-young girls in controversial and unsuccesful adaptations of Lolita. Unlike our beloved Naseer, who ages with all the grace and curmudgeony dignity of a fine wine, the Big B just becomes more and more totally not-cool and totally not-liked-by-us.

Ya hear that, King of Bollywood! Eh? EH?!

Here then is our next entry into the Project. Marvel at how totally horrible his hair is and how totally lame everything (except the song, which is quite nice) is. We would cry too if he called us in such a state!

Uuuggghhh.
Posted by a ppcc representative at 11:29