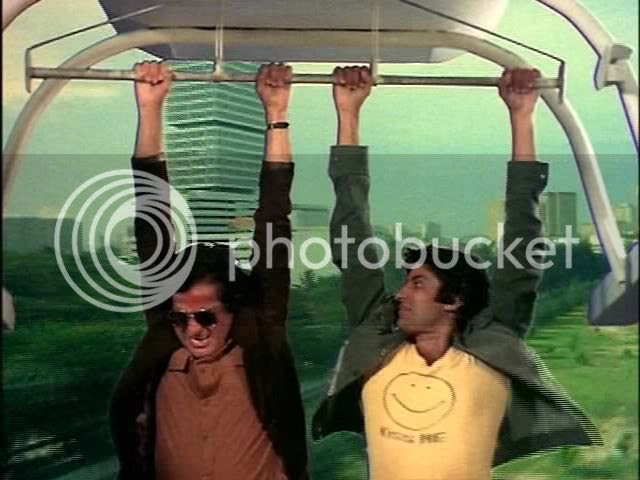 Hanging off a helicopter. Amitabh's shirt reads: KISS ME.

Thank God for the populist masala genre. Thank God for three-hour epics that span the entire range of human emotion, making notable pit stops on slapstick humor and heart-warming squish. Movies where everyone is reconciled, and things like child abuse, alcoholism, even blindness, are all resolved with a couple songs and a lot of heart. Leave your disbelief at the door, and forget about logical blunders (like pretending the London suburbs are Bombay!), this stuff is light and joyous and perfect.

Suhaag is just so fun, it's like a circus as seen through the lens of Austin Powers. Directed by that master of masala, Manmohan Desai, the plot seems to be suffering from double-vision: two heros, two heroines, two villains. During the required prologue, we learn that (as usual) two twin boys have been illegitimately fathered by a drunken good-for-nothing named Vikram Singh (Amjad Khan, as usual). Enter the second villain, Jaggi, who steals one baby and delivers him to a limping liquor salesman. Yes, all very Dickensian. Both boys grow up in abject poverty, apparently just down the road from each other, and both are regularly beaten and force-fed alcohol. Runty brother Kishan has it a bit easier since at least he's got mom, while Amit has to tough it out alone on the streets. (Can you guess who grows up into who?)

One of our favorite masala devices: the growing up montage song.

Fast-forward fifteen years, where Kishan is now an upstanding and slightly anal police inspector who favors black leather and is played by Shashi Kapoor (as usual). Amit, meanwhile, is a hard-drinking, rowdy tough with a heart of gold, played by Amitabh Bachchan. The rest of the plot is incredibly complicated and not worth outlining. You just have to watch it. Suffice to say that director Desai manages to squeeze in everything and anything an audience member could possibly wish for: silly disguises - including Amitabh in full-on Punjabi bhangra style, and Shashi in a 70s pothead look which apparently includes really smoking pot - people hanging off of helicopters, those helicopters then exploding, drunken yelling from the top of a temple (reminiscent of Sholay!), Shashi getting blinded from a chandelier to the head, someone else getting their eye poked out in the bedroom, crazy role reversals, INFINITE IRONY (a requisite of all Hindi movies, it seems), self-references, Amjad Khan dressed as a religious mendicant, breaks in the fourth wall, and, of course, a brief but effective Alcoholics Anonymous course as sung by Rekha. Mix in seven songs, all of which are great, and you have a classic of masala goodness. 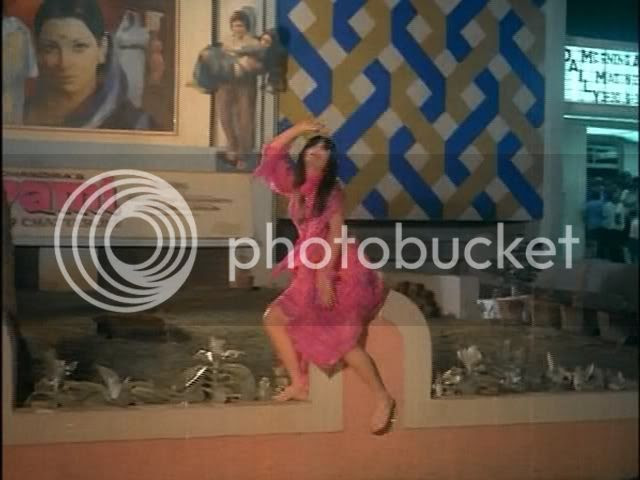 Look at the upper left corner: it's Shabana!

Some people apparently don't "get" the masala genre. They demand linear narratives, foreseeable or at least logical plot developments, restraint. If that's your cup of tea, Suhaag will not be for you. It's more of a free-floating philosophy of aesthetitainment. It looks deep within you and guesses what you'd like to see next. With the PPCC, it knew we have a soft spot for religious devotion on the part of handsome men. So when Amitabh guides his runty little brother Shashi up the temple steps, even though there's no reason in the movie for such a scene and Shashi Kapoor is actually older than Amitabh (and probably healthy, not runty), we were so happy. We were also happy by the self-references: for example, when Parveen Babi does the whole I'm-too-drunk-you'd-better-take-me-to-YOUR-place song in front of a Shabana Azmi movie poster. But back to Amitabh and Shashi, they're really quite close in this film; so much so that it merits comment. Because, at least in the West, where do you see two grown men ruffle each other's hair, stroke each other's cheek, nuzzle each other? Of course the PPCC approves. Two thumbs up, you cuties!

Amitabh teaches Shashi that being blind should not stop him from having a full life!


Rekha teaches Amitabh that he doesn't need to be a slave to alcohol.

(Requisite Film Analytics:) Then there are the interesting themes of blindness and vision, fathers and sons. It felt a bit epic at times, what with the labyrinthine irony, wherein for example the father intentionally blinds his son (not realizing it's his son) and then the newly-blinded son meets his father later (not realizing it's his father) and also not realizing it's his archnemesis crime boss because someone spilled tea on the Wanted ad earlier in the film. Or the other bit, when the sister doesn't know her sister is a high-class courtesan (who blinded one of the villains' son, incidentally) and the brother doesn't realize the courtesan sister is actually his girlfriend and that now they're all actually related twice over. Wait, what? 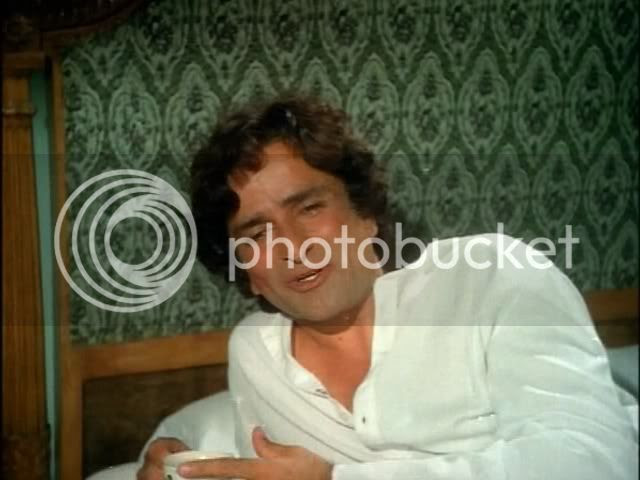 Another favorite masala device: lipstick-stained Shashi wakes up the next morning and remembers nothing!

Don't worry about it. That's our motto when watching these masala movies. Let go. It doesn't need to make sense. It need only be delightful. Manmohan Desai might have wanted to make references to Deewaar or Mother India or the Ramayana, but it seems like he just got too lazy or distracted to keep it going and decided that it'd be so much cooler to have Amitabh just start dancing with the callgirls. Which, of course, he does and it totally is. Dishoom, dishoom, baby!

Our favorite song #1: wherein Amitabh dances with a bottle first and Rekha second.

Our favorite song #2: Silliness and bhangra and London and apparently SRK's next movie takes the title from this song. Shashi's expressions are priceless!

OK we love all the songs in this one.
Posted by a ppcc representative at 23:25

Woah! Must see! Though I should admit I was about to say "Wait, what?" exactly when you did.

Is it just a random happenstance of these clips and stills, or does Shashi look peculiarly aged here? Or is it because I've been rewatching Sharmeelee?

This is one of those films where I think "Have I seen this one? or am I thinking of a different Manmohan Desai-Amitabh-Shashi film?"... :-)

This movie is sheer unadulterated madness & some of the most fun you can have in a Bollywood movie. Everyone does an amazing job in this and yes, the songs are all spectacular. Every time I go to an Indian store and ask for the soundtrack they inevitably pull out the Ajay Devgan/Akshay Kumar one :(

So many favorite moments - Shashi donning one of the best pothead undercover outfits EVER to bust an opium club and takes home a completely wasted Parveen Babi. The aforementioned Amitabh scene when in the midst of breaking an illegal alcohol factory to pieces he takes a moment to dance with the callgirls working there. The bhangra song with all 4 actors. The little Amitabh in the bottle in the song that is on the post.

One thing did puzzle me as a die-hard Kishore fan... this is one of the few 80's movies where Kishore doesn't provide playback for Amitabh, wonder why. And yes, ladies Shashi does rock & Amitabh does rule. But Parveen Babi is simply one of the most stunningly beautiful actresses to grace the Indian screen and Rekha's 'hooker with a heart of gold' has never looked better ;)

Speaking of Shashi looking great, have you seen this?
http://apnieastindiacompany.blogspot.com/2008/04/anari.html

Beth - Ahh, poor, aging Shashi. He doesn't strike me as particularly old-looking in this one, but then again, I've never seen Sharmeelee. I love my late 70s Shashi, though I must say, I was noticing his jowls in the latest 70s masala vehicle that I've found (Sawaal, 78 perhaps? Shashi, Sanjeev Kumar, Randhir, Waheeda Rehman aaand Mac!).

I think we should market Shashitabhangra.

The DVD man was trying to impress Anari upon me, and he kept insisting it's a Raj Kapoor movie, not a Shashi one. Perhaps there's two? Anyway, I opted for Sawaal instead.

Sanket - the Amitabh in a bottle!!! I love that scene.

Anari is indeed a Raj Kapoor movie with Nutan - I believe it was directed by H. Mukherjee. Don't remember the film much (probably not as good as the B/W masterpieces with Nargis) but the songs were top shelf.

Just saw this last night thanks to your recommendation! It really was a hoot--Like Sanket, my favorite parts were the drunken Parveen/Shashi song, all of Amitabh's dancing, the little Amitabh in a bottle, and of course, the amazing bromantic jodi between Shashi and Amitabh!

I'll probably point this out in my review, but I thought Shashi and Amitabh shared a deeper chemistry here than in the classic (and better known) "Deewar". Just my opinion though.

Delightful entertaining review to a dito movie. Inspired by one line up there i thought, Suhaag (1979) feels like zapping through a long string of 70s bollies, strictly only stopping at every highlight.