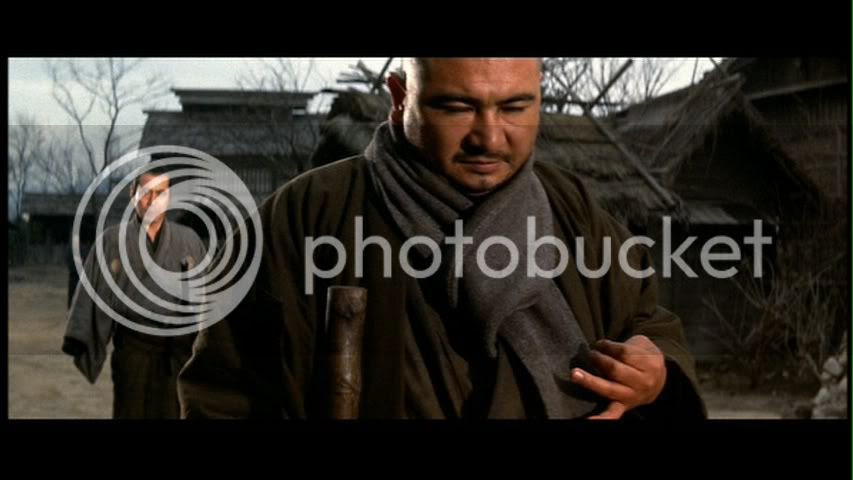 Yojimbo follows Zatoichi in order to taunt him.

Zatôichi to Yôjinbô (Zatoichi Meets Yojimbo) is one of those movies that gets better and better with each time you watch it. This is especially true for viewers unfamiliar with popular Japanese cinema, as much of its delight comes from watching two iconic figures - the blind masseuse/bad-ass Zatoichi (Shintarô Katsu) and the grumpy samurai/bad-ass Yojimbo (Toshiro Mifune) - circle each other and clash. The plot is also told in a leisurely, non-linear way, so that important points are sometimes revealed fairly late in the film. And if you're unfamiliar with the tropes of samurai cinema and the general history of feudal Japan, you might feel a bit lost at first, as these are obviously assumed cultural reference points for the home audience. But, we at the PPCC can guarantee that, once you do become familiar with the genre and its cultural references, the movie becomes very, very enjoyable. 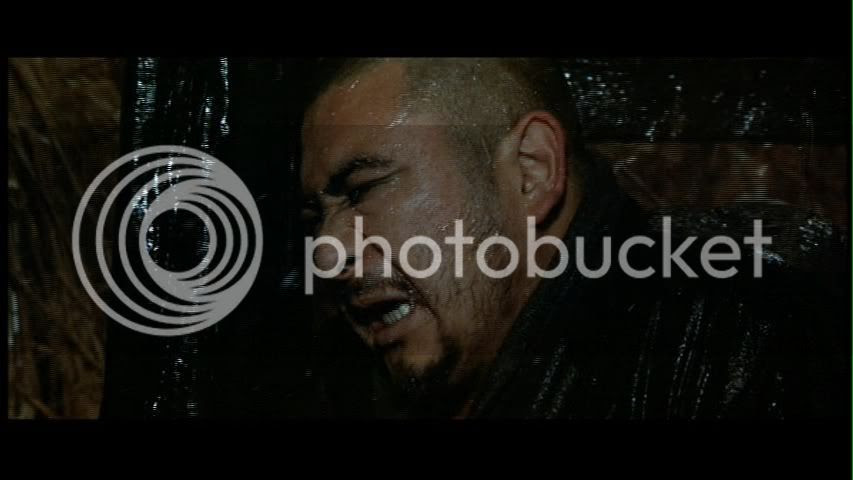 Zatoichi decides he needs an umbrella. 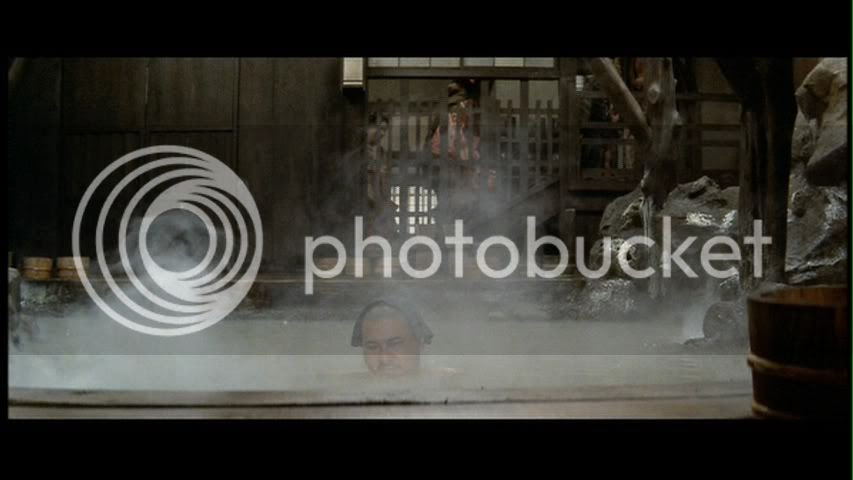 The film opens with Zatoichi, our protagonist, killing some dude in a field. It is, of course, raining. Zatoichi hides away in a shed, and meanwhile some other men steal the dude's money and run away. This establishes the first and most prominent theme in the film: greed. Zatoichi decides he's sick and tired of all this ("I've got blood on my hands," he says, and later, "I've had my fill of hell"), and dreams of returning to an idyllic village he passed through years ago. Picking his way through the beautiful countryside, he returns to the village and finds that it's gate now has over a hundred jizo statues outside - that is, tombstones. And Zatoichi soon learns that not all is well in his personal paradise. The town is (as per samurai usual) overrun by gangs, and a nameless yojimbo - yes, THE Yojimbo - has been ordered to put Zatoichi's head on a platter. 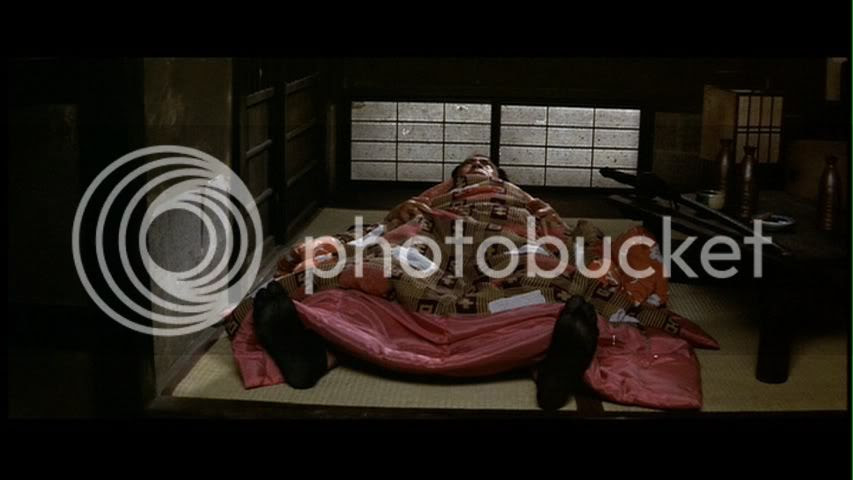 Thankfully Yojimbo spends most of the time wasted and is hence less of a threat.

It's kind of a stretch, but the very first time we saw this, we thought about the Zatoichi/Yojimbo parallels as something of an Apollonian and Dionysian split. . If you don't feel like following the Wiki link: the Apollonian and Dionysian dichotomy is an idea mostly used in aesthetics, where Apollo represents clarity, order and discipline in making art, and Dionysus represents intoxication, inebriation and primal inspiration. Obvious examples of Dionysian artists would be Jackson Pollock, Rumi, or Oh-won. Apollonian artists would be Andy Warhol or George Seurat or anyone whose art depends crucially on not making mistakes. They say the best art comes from the combination and tension of these two drives, art that speaks from both the intellect and guts. Anyway, we thought this about the movie mostly because the sober/drunk dichotomy between Zatoichi and Yojimbo is often emphasized, with the former routinely calling the latter "an animal". Furthermore, Yojimbo's drives are intense and primal - he drinks, he pines for the prostitute Umeno (Ayako Wakao), he rages and roars. In this film, Yojimbo is very much out of control. Zatoichi is Zen-like, by comparison. While he too has his scruffy moments, when contrasted with Yojimbo, he is methodical, focused, almost lofty - while he too pines for Umeno, his love is more poetic than physical. He likens her to the scent of plums, he marvels at the soft texture of her hand. Yojimbo, instead, barks his requests: "Lie with me."

(Of course, this whole out-of-control Dionysus vibe is completely undermined when Yojimbo reveals himself to be a spy called Sasa. We at the PPCC choose to completely disregard this part of the plot, since we think the filmmakers just did it to avoid laying claim to a character created by Akira Kurosawa. And also we just love Yojimbo so much, we can't accept that he lied to us for so long.) 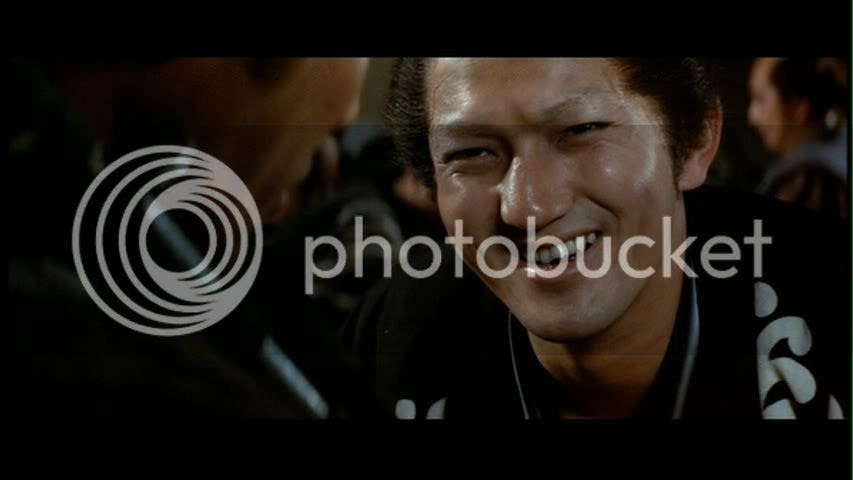 This guy's a total idiot.

The Greek feel can also be found in the film's major theme: greed. Throughout the film, all characters are consumed by this greed, and the only morality comes from how much they let greed make them do evil things. Zatoichi and Yojimbo are the last ones to go for the gold that everyone is searching for, and this final scene establishes them as - for all their ambiguities - primarily good. But this quest for money is shown to lead to patricide, filicide, forced prostitution and treachery. This is where the Greek stuff comes in: the dennouement definitely feels like something out of Aeschylus or Sophocles, with father and brothers in open warfare, while Zatoichi, Yojimbo and the frightening Kuzuryu (Shin Kishida) act as a Greek chorus looking on. In fact, this was our favorite part in the film: when the characters slowly follow each other to the gold, alternatively bleeding and dragging themselves, and Yojimbo declares, "You take it from here. I'm sick of this. I'm going to throw up." Indeed, the film is screaming "look what greed does!" at this point, but its presentation is wonderfully stylized and archetypal, so it doesn't feel too didactic. 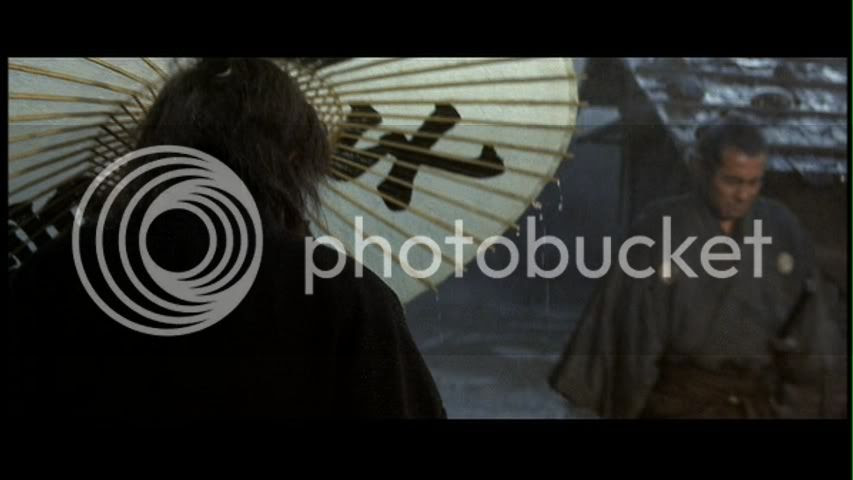 Our favorite moment in the film. Wonderful composition, aesthetically, and a wonderful way to create tension within the story. The evil Kuzuryu spots Yojimbo. 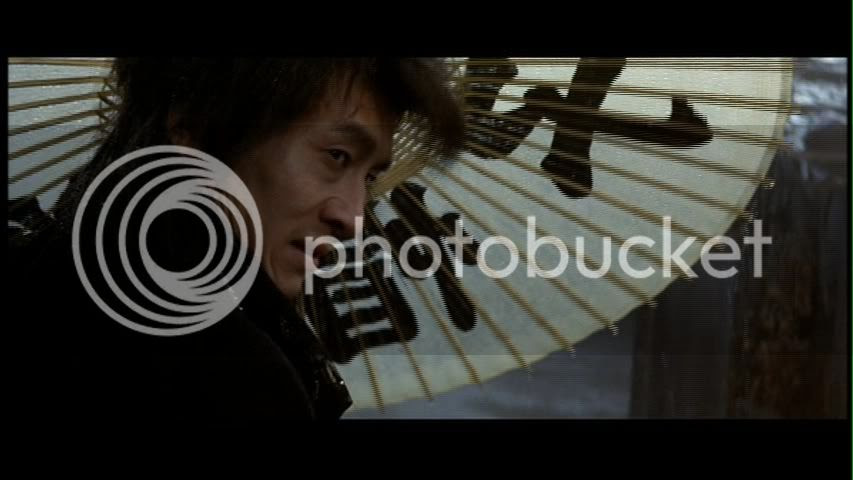 An interesting thing is how the gun-slinger in these samurai movies is always presented as such a creepy, unquestionably evil character. In this film, Kuzuryu is the samurai with the "secret weapon", and, as usual, he has that sick, sinister smile of a total psycho. Indeed, because the gun-slinger undermines all the nobility and hard work of an ancient tradition - it's like the West corrupting the cultural heritage, because now all it takes is a gun and an idiot to pull the trigger to bring down even the craftiest swordsman. You can see another such Evil Gun-slinger in Yojimbo. 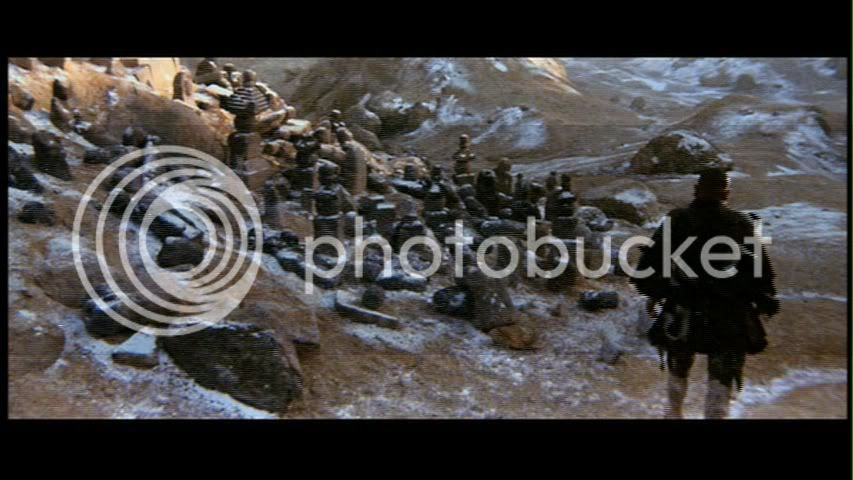 And for more Zatoichi fun, see the previously PPCCed Zatoichi (2003).

Anyway, despite all this heaviness, there are some very light touches - the comedy between Zatoichi and Yojimbo is particularly funny. They tease each other, to the point of playing practical jokes, and one of our favorite moments in the film is when, after reconciling, their familiar banter resumes: Yojimbo puts out his leg to trip Zatoichi, and Zatoichi steps on his knee. Yojimbo barks: "Freak!" And Zatoichi responds: "Animal."

Posted by a ppcc representative at 12:48