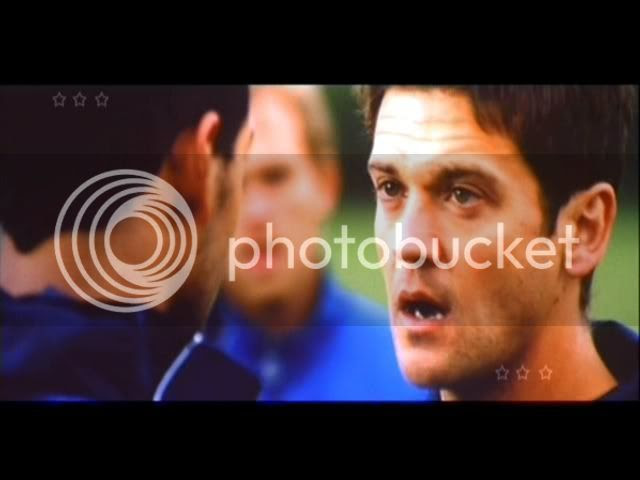 In the first few moments of Dhan Dhana Dhan Goal, we are introduced to a rag-tag group of underdog football players from Southall, the renowned Little India suburb of London. These players - Pakistani, Indian, Bangladeshi - seemingly overcome their regional differences, united by their passion for football. As the movie progresses, we learn that they're even more firmly united by their collective hate for the gore (white men).

With each scene, this Us Versus Them racism becomes more and more apparent, rendering the film more and more difficult to watch. The first false note occurs when we are introduced to Sunny (John Abraham), the star footballer who chooses to play on the all-white Aston team. When Southall coach, Tony Singh (Boman Irani), approaches Sunny to join the plucky Southall team instead, he plays it along racial lines: "You should be playing with your own community." Sunny scoffs, but, sure enough, at the next practice, an unprovoked, evil Aston teammate calls Sunny a "Paki" and urges him to leave Aston. When Sunny runs into his father at the convenience store, his father warns him: "First they'll break your nose. Then your legs." 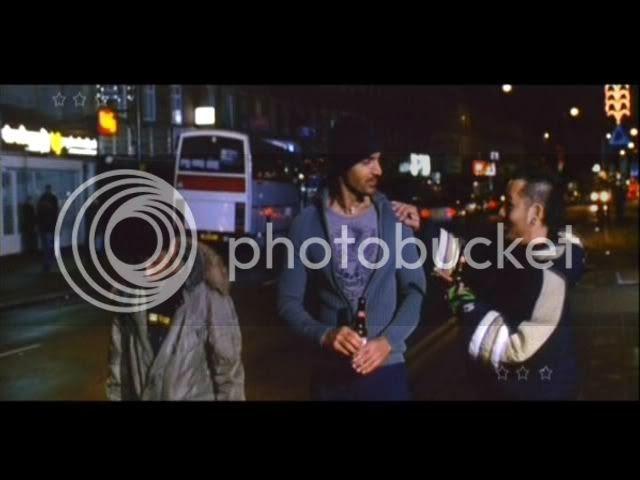 Sunny (John Abraham) is quite the gambler, drinker and hoodlum before he re-joins his Hindustani community.

This demonization of white British people continues apace. Tony Singh was introduced to us as a man battling hidden demons, reluctant to step back onto the football field. What, exactly, is bothering Tony Singh so much? Why, it was the fateful night that random English skinheads attacked Tony in a pub. Not a single gora or gori is portrayed as anything less than Racism Embodied: consider the cold-hearted blond businesswoman, who wants to purchase the Southall United field solely out of spite and is appalled at Southall's winning. Consider the announcer, Johnny Bakshi (Dalip Tahil), who - as his Anglicized first name should indicate - is portrayed as an evil Uncle Tom-style collaborator. When Sunny threatens to leave the team, his teammates weep, and Pakistani captain Shaan (Arshad Warsi), tells Sunny, "It's more than just football! It's about our color, our pride!"

WTF? Did he really just say that? Surely the subtitles had to be amiss. But the PPCC's investigations into other reviews (1, 2, 3, 4...) confirmed that we weren't misreading the subtitles. It really was that blunt. 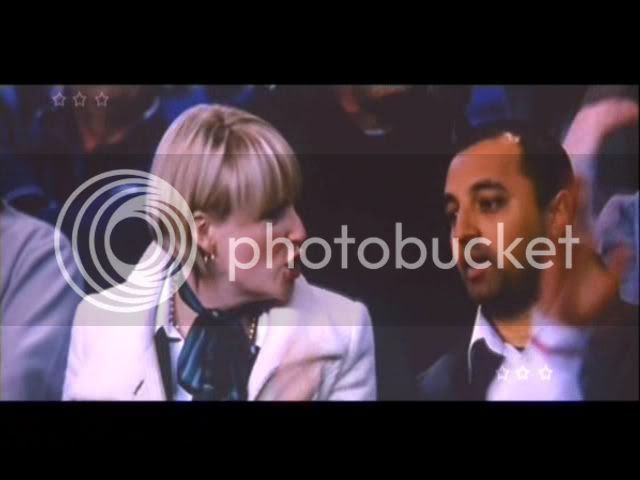 This woman only appears to yell and curse. "Shit! My racist plans are foiled again!"

What's especially worrying is that this presents an unrealistic, overly hostile picture of an NRI's experience abroad. The moral dichotomy - Hindustani good, British bad - is similarly stark: all the Hindustani characters are self-sacrificing and victimized, while all the white British are cruel and aggressive. Consider for example this outrageous review of the film, where apparently racism is a Western problem, something unknown to Indians until they leave the motherland, and apparently even the film's production was mired in "racist incidences". Oh, come on! Why is Shah Rukh Khan telling us a handsome man is a fair man then?

While xenophobia and white stereotypes are present in other Hindi films (Johnny Lever's character in Kuch Kuch Hota Hai, the British children singing Vande Mantaram in Kabhi Khushi Kabhie Gham and moving their angrezi parents to tears by it, Shashi's whole rant in the penultimate scene of Jab Jab Phool Khile), never has the agenda of glorifying Us by demonizing Them been so acute. Suffice to say it was a bit hard to swallow, and not really fun to watch. 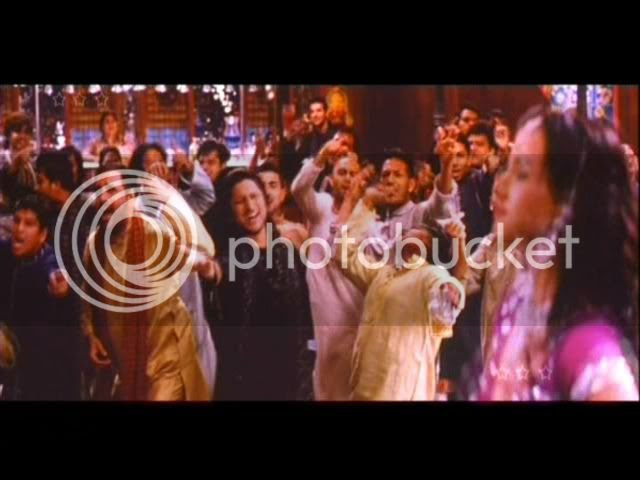 The only real item number. Check out Boman's moves! He's lovin' it!

In terms of filmmaking, the aesthetic is thankfully quite nice: there's a certain gritty quality to the colors and camera angles that was very pleasing to the eye. The music was enjoyable as well, especially the only real item number, Billo Rani. Most of the acting was very stiff - even from stalwarts such as John Abraham, and the highly attractive Arshad Warsi. For the love of God, stop oppressing us.

For those who are seriously interested in postcolonial cinema relating to Anglo-Desi relations, the PPCC heartily recommends My Son the Fanatic. See also anything else by Hanif Kureishi, and anything written by Salman Rushdie. Also Edward Said's Orientalism has always proved useful (and is, after all, the basis of postcolonial discourse!).

For those pining for a film that shows us how Desis can overcome their regional differences to accomplish athletic victory, the PPCC heartily recommends Chak De! India. Thankfully that film is also feminist. Another enlightened, underdog sports Hindi movie is Iqbal.

Posted by a ppcc representative at 20:05

Are you implying that John Abraham is a stalwart of any type of acting other than stiffness? If so, we must have seen different movies. The man is wood personified.

I had kinda sorta wanted to see this, just for 1) London and 2) Arshad Warsi, but I think I'll skip it. This sort of Euro=bad, India=pure dichotomy was bad enough from Shashi's mouth in 1965. Blech. Thanks for throwing yourself on this grenade.

Hmmm...I was thinking I'd pass on this one, and it's confirmed now. Sounds like the films made by Mr. Bharat himself---Manoj Kumar, which I always found difficult to stomach.

and Beth...did you see Water? I think JA was quite good in that, but I haven't seen him in much else (Dhoom but does that count? I think not)...but as my friend's husband says: "He's dreamy."

I did, but I can't give him any points for that performance. He didn't stink, but he added nothing to the movie, in my opinion.

He also does nothing for me on the hot front, but I can see how that's a factor. :)

Whoa! What a bizzare Freudian slip. I definitely did not mean to describe John Abraham as a stalwart; I was thinking of Boman Irani. Beth, you're absolutely right (just like you caught my Om Shanti Om review describing badminton as tennis!). You know what I think of JA - I keep thinking he's Arjun Rampal!

It's times like these that I suspect someone is messing with my brain.

JA=AR is the kind of math I can understand. I'm sure there's another limb of the Wooden Male Model Tree that we're forgetting, but that will do for now.

I think it's time for the tin foil deflector beanie!

oh i so agree on this review! i really enjoyed the music (i'll post "dhan dhana dhan" on my music blog and dedicate it to a team with a better policy in racial issues - fc st pauli - and then i'll post "billo rani" and dedicate it only to my own sweet self...) and i keep smiling when i think of arshad warsi in the billo rani number :). but i had a great laugh to myself when i saw john abrahams winter pale face (the man's got less pigment than me and i'm a swede) and heard the unforgettable line: "...it's about our colour" - it's hilarious. reminded me of some sketches with sanjeev bhaskar in goodness gracious me, i think i will recommend that series to the director of "dhan dhana.."