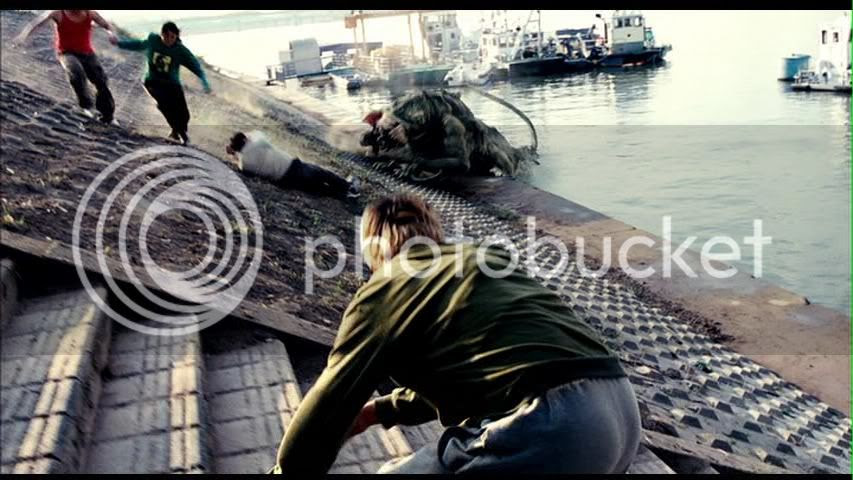 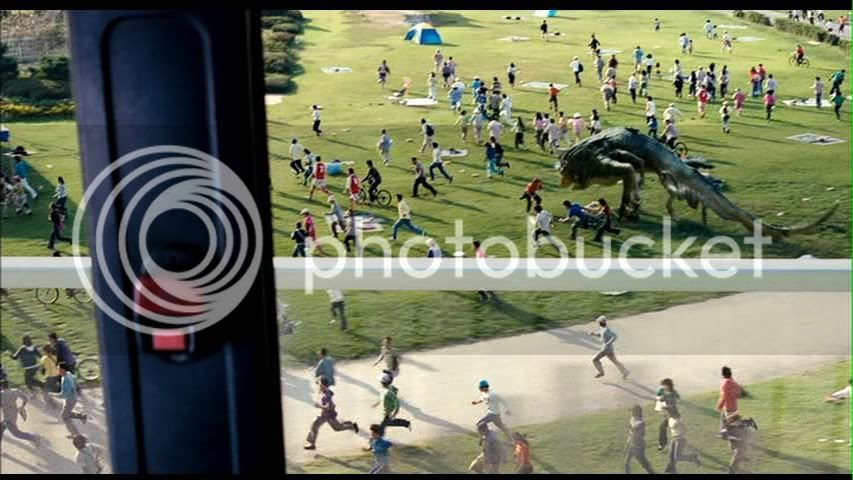 Run for your lives!

A test of a horror film's quality may be how much it relies on shadows and shock value. In The Host's most exciting sequence, a chemically-created sea monster (a la Godzilla) is terrorizing parkgoers in Seoul. This is all done in broad daylight, and yet the effect is no less disorienting or frightening. Just as the protagonist, Park Gang-du (Kang-ho Song), watches in confusion and horror as the monster comes running up the sidewalk, so do we. It's all there in the sun, but we can't quite understand how people are getting sucked up into that slimy black thing. The PPCC loved this scene, as it was exhilirating in that disaster movie way, and it was fresh in its freedom from using horror movie gimmicks to yoke fear. The monster never really surprises us, but it does scare us. It was like the initial sequence of Spielberg's War of the Worlds, where the Martian tripod lumbers into the air, blows its Tibetan horn, announcing its intentions before vaporizing the crowds. Nothing is hidden, and yet nothing is really explained either. Scary!

The plot is standard B-movie. At the urging of a morally bankrupt American official, a Korean scientist pours gallons and gallons of formaldehyde down the sink and into the Han River. Inevitably, this creates a mutant creature with a taste for human flesh. We are introduced to a park food stand vendor, Gang-du, and his family: his father, Hie-bong (Hie-bong Byeon), his daughter, Hyun-seo (Ah-sung Ko), and his sister, Nam-Joo (Du-na Bae). His brother, Nam-il (Hae-il Park), arrives after the monster's entrance. One sunny day, a monster crawls out of the sea and begins eating people left and right. Much chaos ensues. And poor Hyun-seo is snatched by the monster's tail, sending the rest of the family in a frenzy. At first, they despair, giving her up for dead, but then Hyun-seo manages to call her father on his cell phone and say only that the monster has her trapped in a "large sewer". This glimmer of hope is enough, and the bickering, grieving family is united in its quest to save little Hyun-seo. 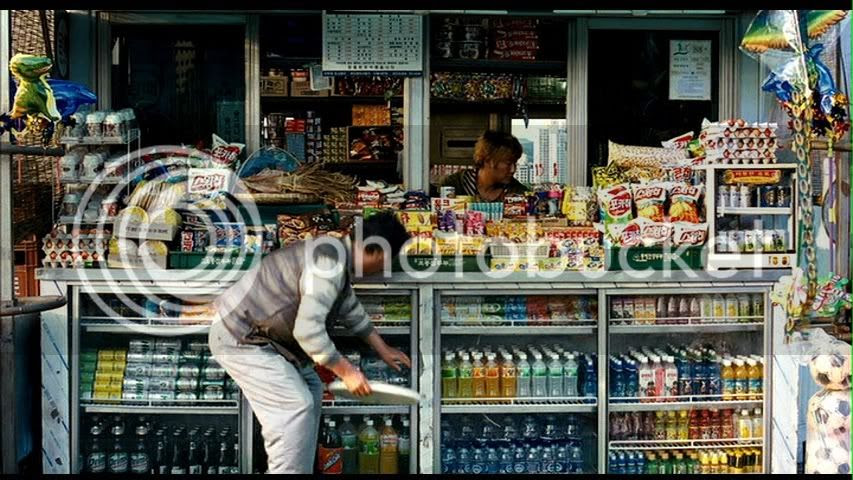 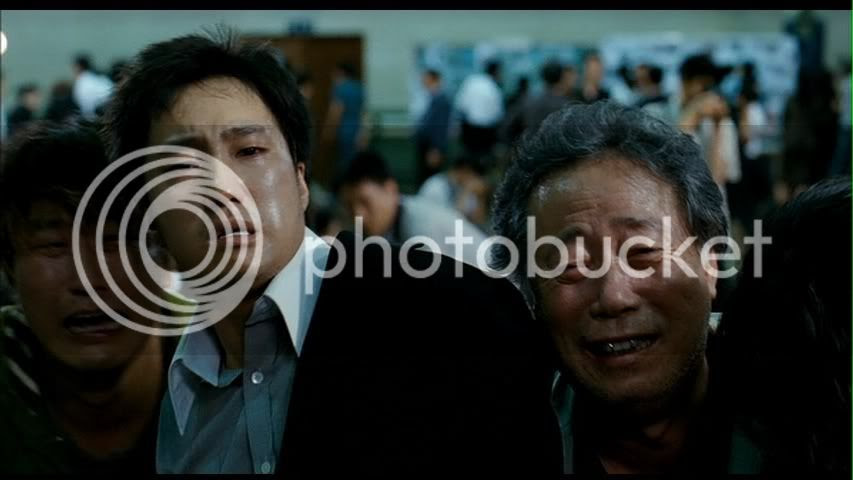 Much like our previously reviewed Hell in the Pacific, this is a cross-genre hybrid that manages to succeed on several levels: it is part horror and part human tragicomedy. The laughter and tears come from the family's interactions; even in the face of a mutant sea monster, they continue their petty and small-scale arguments, alternatively squabbling with and clinging to each other. The film presents this human face with the same directness as it presented the monster in sunlight: that is, expect no shady melodrama. And the tragicomedy mixes well with the horror: it gives us a respite from the tension, while meanwhile augmenting it by giving us characters to care about.

Given that this is an ensemble-based story, all the performances are uniformly good, with no particular stand-out. If anything, our favorite character was the embittered and unemployed brother, Nam-il. But that was only because he was so cool. Another favorite was the patriarch, Hie-bong, though again he just appealed to us because of his warm, fuzzy and wizened character. Shades of Obi-Wan! 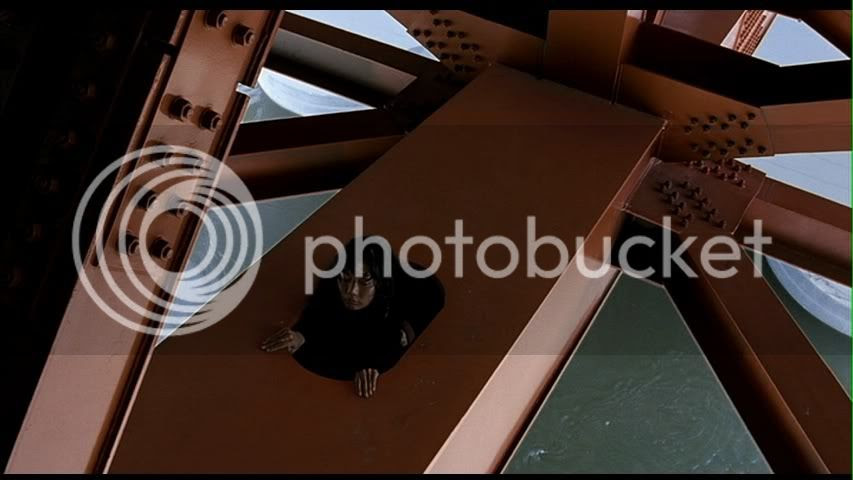 The presence of Americans in the film is interesting to explore. As we said above, it was an evil, sneering American scientist who coerced his Korean colleague to dump the formaldehyde. Later, during the monster's first rampage, an American serviceman joins Gang-du in trying to fight off the monster. The US military appears in the background, and the US is forever portrayed as an overarching, quasi-imperialist power who has wrestled the controls away from Korea. Indeed, while the family searches for Hyun-seo, the subplot is that the American military is going to dump "Agent Yellow" onto Korea in an effort to contain the threat of virus which the monster carries. (This threat is later revealed to be false, hence further undermining the US.) 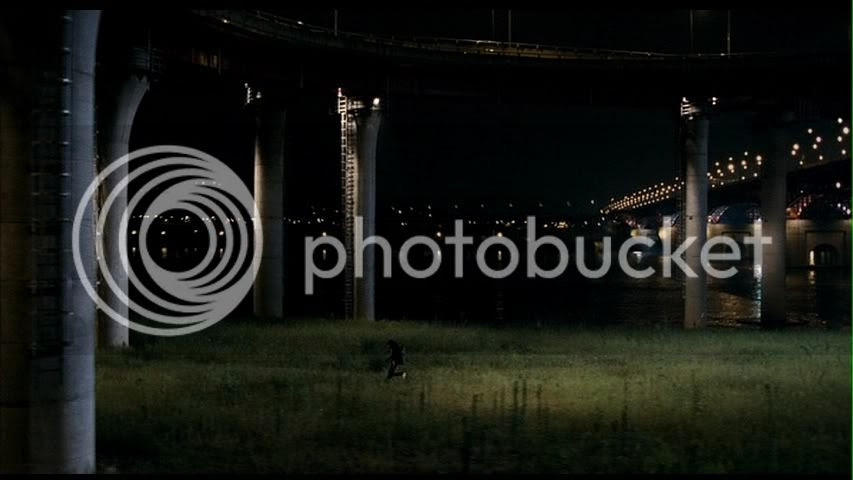 But we're not the ones who actually picked up on the political commentary. That all came from the film's Wikipedia article. The article points to another article about American bullying and quasi-imperialism regarding local film markets:


In July [2006], South Korea cut the number of days a year that theaters are required to show local films to 73 from 146, meeting the demands of the Motion Picture Association of America, which represents Sony, Walt Disney and other moviemakers.
"Korean filmmakers take center stage to bash trade talks", Heejin Koo

What?! The PPCC, as a lover of non-Hollywood cinema, is very, very alarmed by this. That just sounds like blatant, intentional cultural imperialism - where, until now, we'd been assuming Hollywood's success was the result of unintended cultural imperialism (whatever that means, admittedly). How does this relate to The Host? Apparently its director, Bong Hoon Jo,


...staged a lone protest outside the Culture Ministry in Seoul, shouting slogans and raising a red placard.

Since February, the South Korean movie community has stationed one person each day at the ministry or the presidential Blue House to complain that the industry is being sacrificed to Hollywood for an agreement that may bring an extra $29 billion of trade with the United States each year.
ibid.

Oldboy, another popular Korean film which was exported like crazy, is one of the Founding Films of the PPCC. And apparently its star, Choi Min-Sik, likewise protested at Cannes for world culture's emancipation from Hollywood's grip. Yeah, man! Strike a blow for world cinema! 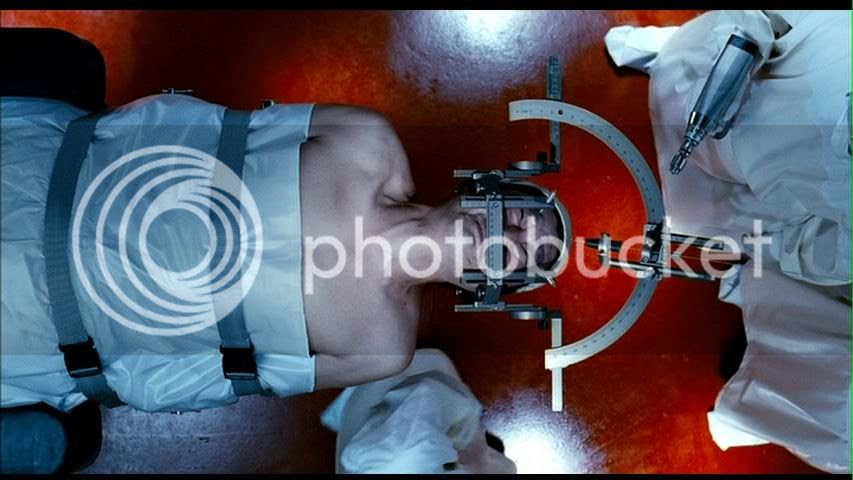 Let me be free, Hollywood!
Posted by a ppcc representative at 20:36

Hi Nice Blog .In my point of view seo india is designing, writing, coding and maintaining our web site easily. It is a good chance to appear our web page at the top of search engine queries for the selected keywords and key phrases.