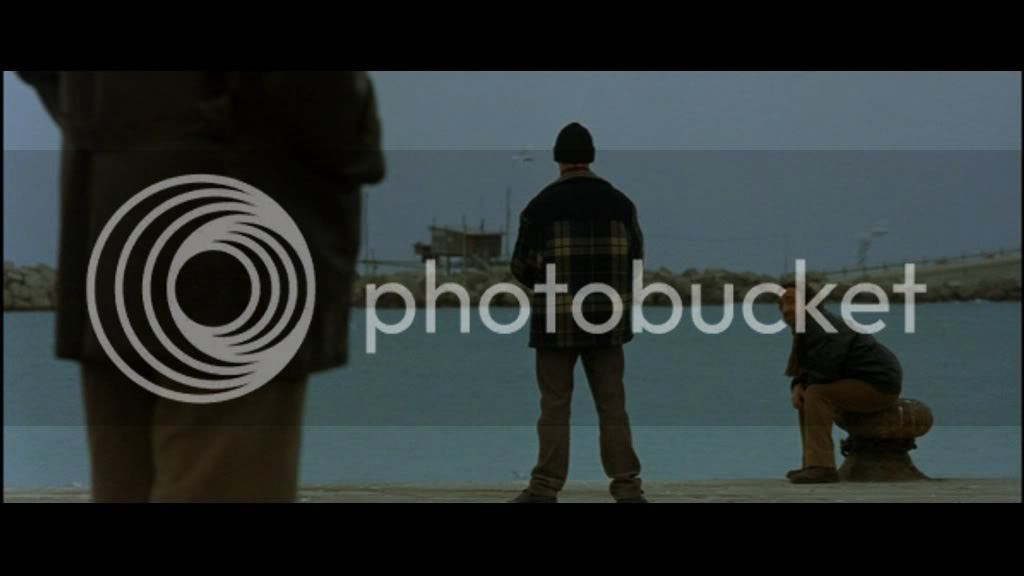 Coldplay was playing in this scene.

The seasoned PPCC readership will no doubt be aware of our quasi-socialist aesthetic tendencies: that is, the poorer the characters, the more we like a film. See, for example, our proletarian masala favorites: Chor Sipahee, Immaan Dharam, or Kaala Patthar. So Il posto dell'anima (The Soul's Place) was a shoe-in: here was a film about factory workers going on strike in a poor village in Abruzzo, Italy. It was basically like Norma Rae, except with an Abruzzese accent: a-oh, a-Nor-ma! What wasn't to love?

Yet we found its political morals a little too blunt. It was all a bit obvious, almost propagandy in its childish proselytizing of the Eternal Class Struggle, and the ending's needless melodrama was just the icing on the crap cake. OK, that might be a bit too harsh, it wasn't crap. In some moments, the film was sweet and earnest. The characters were very strong, very clearly cut. Silvio Orlando resisted the urge to be too saintly, despite the saintliness that is thrust upon him in the end. Yet, after one too many Coldplay-infused scenes, the PPCC just threw up its hands, our appreciation went down the drain and we had to exclaim, "Oh, come on with the shameless emo-ness and enough with the Coldplay!" 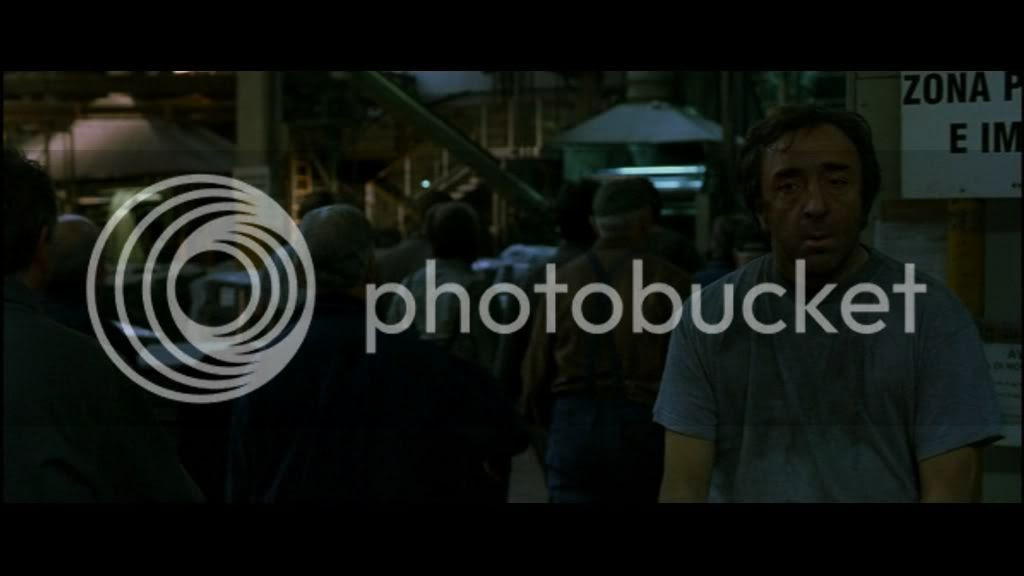 Silvio Orlando has a wonderful hang-dog expression sometimes. Perfect for these roles!

The setting is an idyllic village in Abruzzo, where the mountains are stunning and the wild boar roams. Most of the villagers are employed in the local tire-making factory, which is owned by an (incidentally a little evil) American multinational. Yes, when Americans aren't inadvertently engineering biohazardous mutants in Korea, they're oppressing workers in Italy. One day, the American multinational decides to close the factory and fire all the workers - around 200 men and women are left unemployed overnight. The narrative focuses on three: the ancient union leader and alpha leader, Salvatore (Michele Placido), the young firebrand, Mario (Claudio Santamaria), and the sensitive, easygoing Antonio (Silvio Orlando). These three men react in very different ways to their plight: Antonio worries but happily escapes into the arms of his long-time partner, Nina (Paola Cortellesi), Salvatore organizes the workers for a fight, and Mario alternatively explodes and despairs. The three, while friends, also clash - especially as the desperate, individualist Mario finds an alternative source of income selling homemade pasta. Their domestic stories mix with the workers' fight to keep the factory open, and the film ends, as we said, on a somewhat unneeded melodramatic note. 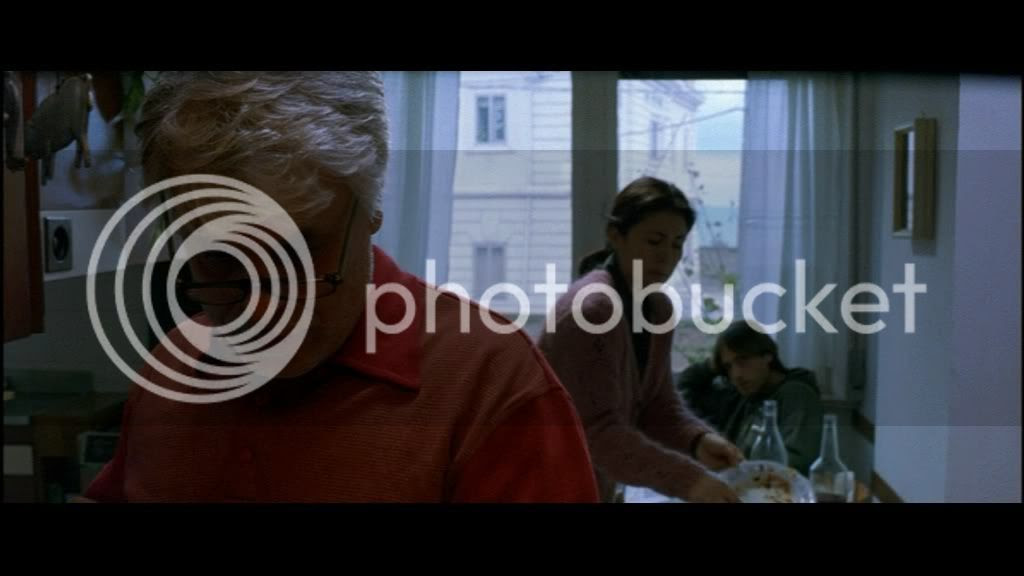 If they were Teenage Mutant Ninja Turtles, Salvatore would be Leonardo, the leader. 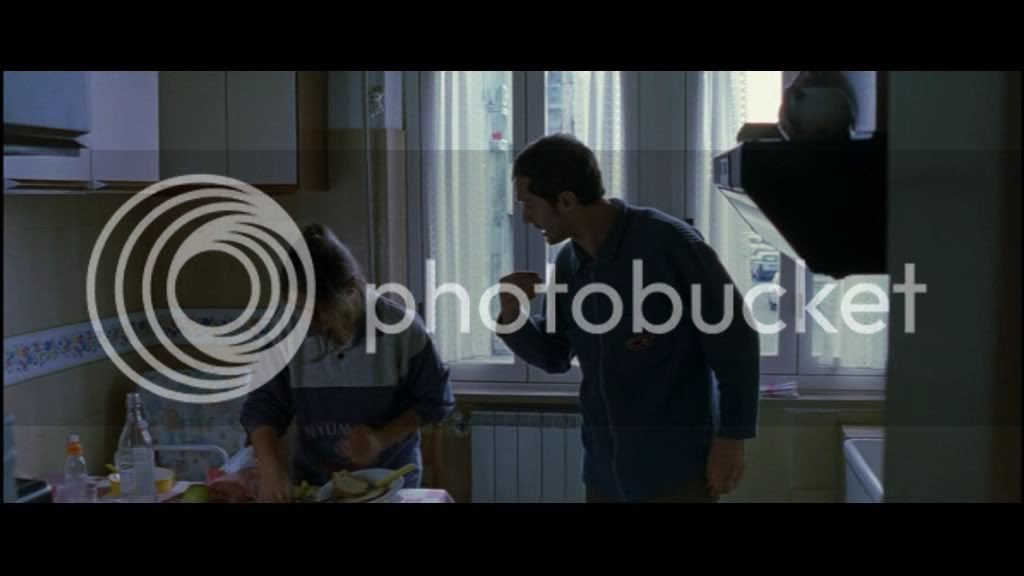 Mario would be Raphael, the angry one. 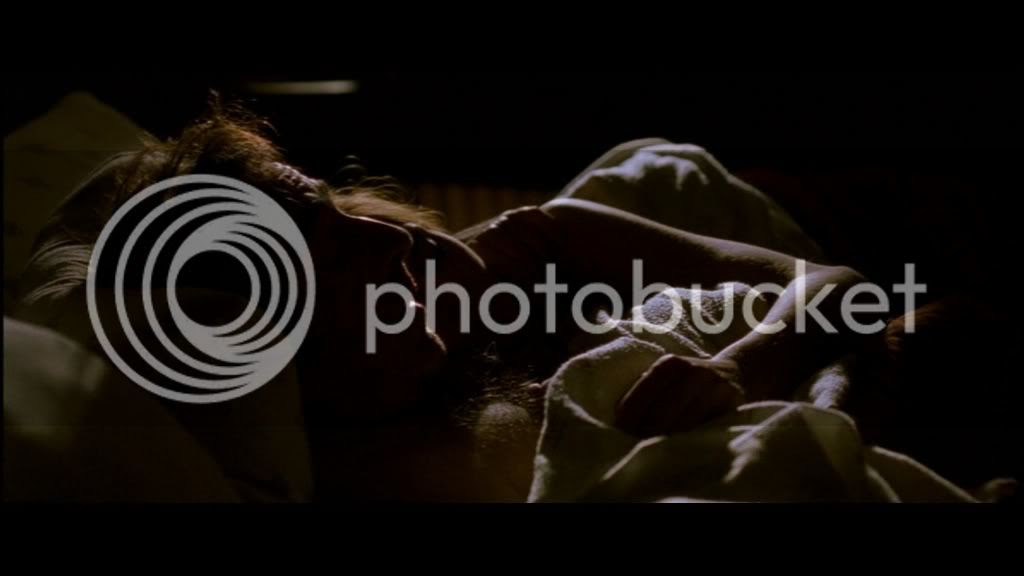 And Antonio would be Michelangelo, the laid back one.

From a post-2000 economic perspective, it all seems a little hard to believe - while the southern end of Italy is certainly poorer than the northern part, it's a bit against stereotype to see an anti-globalization tale of factory serfs coming out of modern-day Italy. At least, the cold, hard economist in us could not help wondering whether this was really a tale of the Evils of Globalization and American MNCs, or whether this had more to do with those unfortunate sectors of a developed economy that are left behind when a country shifts away from manufacturing. Honestly, we don't think the director's aims were that subtle. There was narry a mention about painful but inevitable socioeconomic changes and these workers' plight was not defined in terms of bad timing, but rather in terms of universal class struggle. Basically, this was a classical, socialist moral tale told in a somewhat unconvincing context. Put this story in Pakistan (as they did for child labor in Iqbal), and we'll believe it more. The fact that it's in a developed, European country made us a bit more skeptical of the realism. That said, Italy has an abundance of unions, strikes, and classical socialism, so perhaps we're coming at it from the wrong angle.

The performances of the three men - Placido, Orlando and Santamaria - were uniformly top-notch, thanks also to the three being very good characters. While we were surprised by Placido's depth (we've always seen him as a bit of a cheeseball), we got what we expected from Santamaria and Orlando. Orlando, in particular, was the center of the film, and - as he almost always does in films - he traded mostly on his hang-dog looks and slightly small, anxious frame to create a believable sketch of good humor mixed with vulnerability. He always seems a bit like a pushover, though also lovable. At least, we're thinking of that one really gloomy movie with the nun and the baby, or even his role in The Son's Room. Paola Cortellesi, as the sole prominent female character, was similar to Santamaria's Mario - a firebrand who yells an awful lot. At times, all this yelling seemed a bit unwarranted (it certainly didn't gain her any points in our affections), though she did skillfully show us how the anger was something of a facade, part of an emotional game that Nina played. 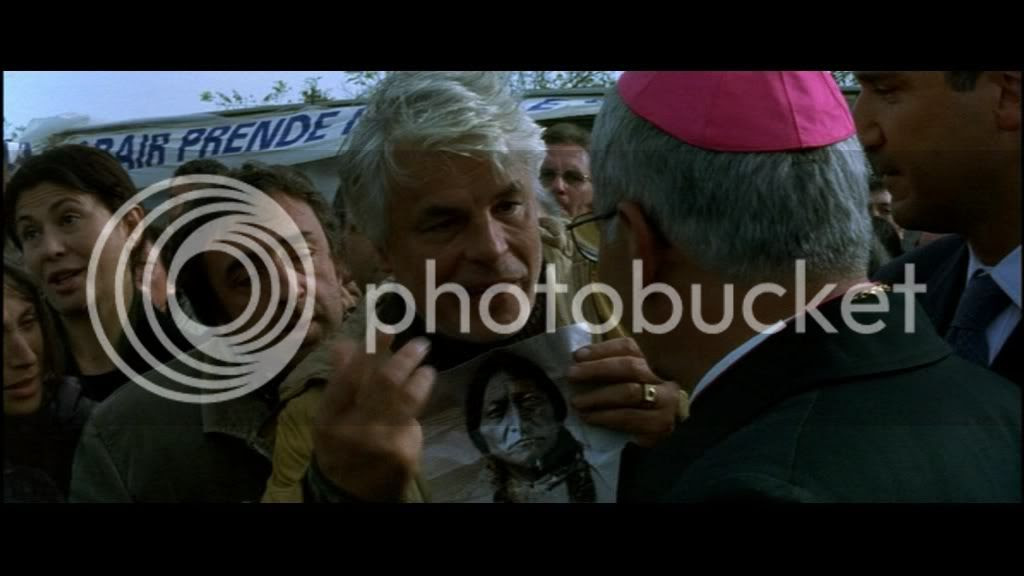 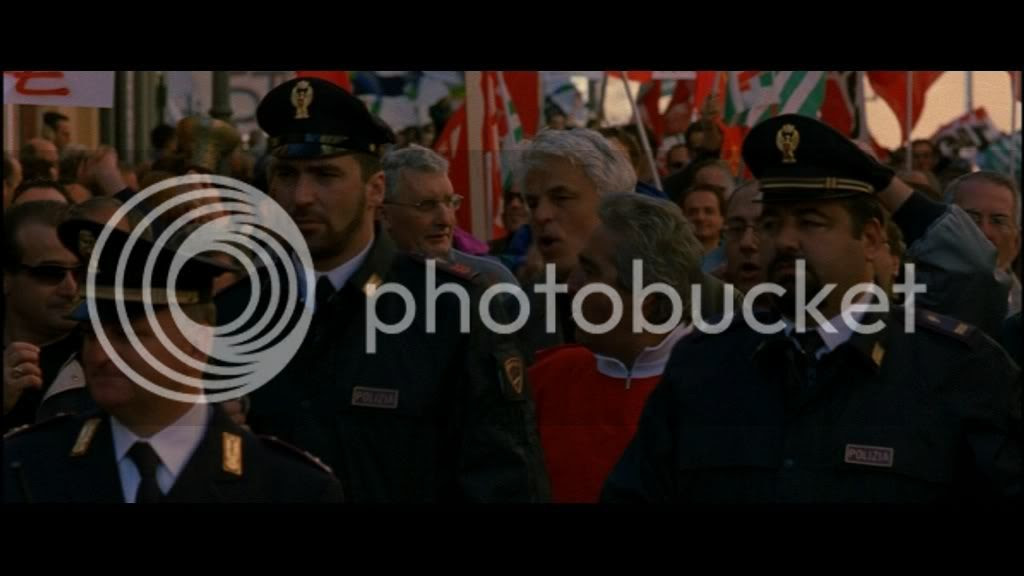 Marching for, some would say, a lost cause.

Anyway, what the film lacked in socio-political subtlety, it made up in the excellent portrayal of modern small-town Italy. There were several details which fleshed out the characters: for example, several scenes where the workers' ignorance is subtly hinted at, or scenes depicting Antonio's retreat into the comforting familiarity of town festivals and the town drunk. All the actors speak in thick Abruzzese accents: their names turning into Mariu, Anto' and Salvato'. The body language is also heavy on the Abruzzese, and the character of Mario is a bit stereotypically melodramatic (at one point declaring that he would rather strangle his children "like little kittens" than let them grow up in poverty). The film, however, never descends into caricature, and this is its strength. 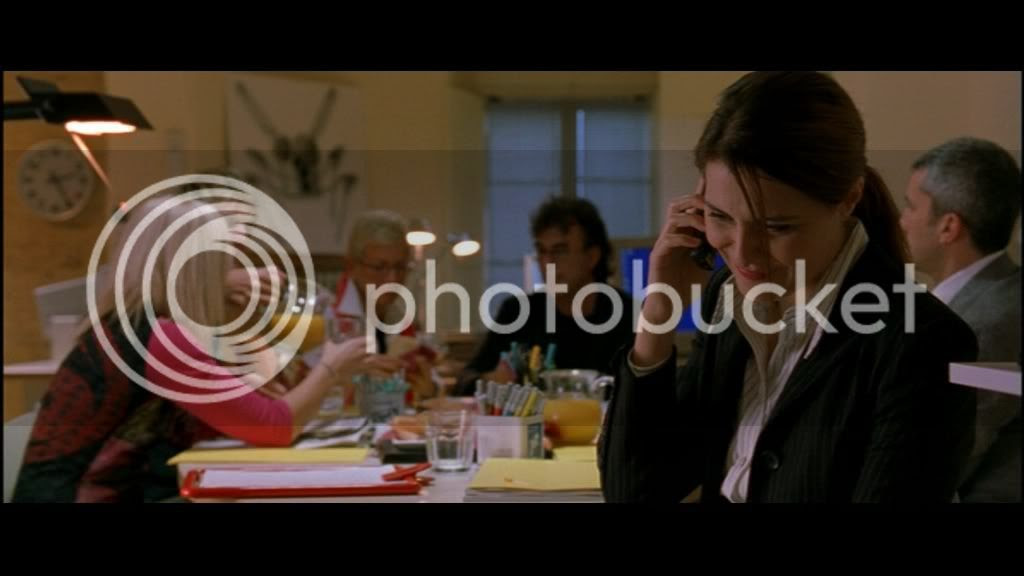 An interesting, unexplored part of the movie: Nina the Social Climber.

There were some interesting notions presented in Nina's character, as someone who climbed up the socioeconomic ladder enough to land a job in fast-paced Milan; unfortunately, this thread is not followed very much, and so we miss some potentially interesting points to make. (Though, as we said, the director didn't seem very interested in making subtle or complex points! Alas, the poor, noble workers!)
Posted by a ppcc representative at 18:19

I have been yelling at the screen about Coldplay when I watch PBS lately. They have two promos with Coldplay currently and are v v annoying. One is for the Jane Austen adaptations, and I resent them forcing me to associate her with Coldplay. BAH.