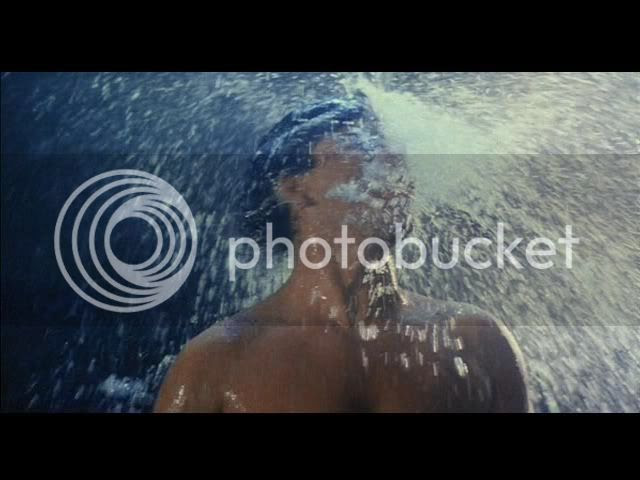 SRK apologists make a lot of hooplah of his acting in films like Swades or Chak De! India, but the PPCC would like to the advance the no doubt unpopular argument that SRK was truly a golden performer back in the day. That is, we have always been far more impressed with the manic, vulnerable, old school SRK of Darr and Baazigar than with the manufactured media product of post-2000. (Though the media product looks better.) Our most recent confirmation of the proto superstar's magnetism is in Ram Jaane.


The title song, which captures the movie's complete vibe.

A shameless remake of Angels with Dirty Faces, Ram Jaane follows the hard-knock life of an anonymous urchin. When said urchin asks a local holy man his name, the man says, "Ram Jaane!" (God knows) And so it goes. Ram Jaane assumes this name for himself, and it comes to represent his past, present, and future. What will happen now? God knows! He was born in a dumpster and grew up in prison. When the adult Ram Jaane (Shah Rukh Khan) leaves the clink, he runs into childhood friend, Murli (Vivek Mushran). Murli has become a certified Do Gooder, and his orphanage, Apna Ghar (My/Your Home), has become a haven for urchins much like Ram Jaane. RJ also runs into his childhood obsession, Bela (Juhi Chawla). Yearning to re-join the childhood trio, but unable to shake off his criminal connections, RJ charms himself into the Apna Ghar community, becoming its informal bodyguard.

When rival hoodlums attempt to steal away the orphanage's land, RJ lays the murderous smackdown, and this leads to a flashpoint of violence and death for the orphanage. An increasingly anxious Murli decides that RJ's influence is poison for the orphans, and he begs Bela - who loves him, but is beloved by RJ - to emotionally con RJ into redemption. When this prostition-for-morals fails because Bela is unwilling to put out, RJ learns that she was faking it - for her heart was with Murli. Hurt and angry, he lashes out at both and regrets it. He then engages on a suicide run, and much melodrama ensues. 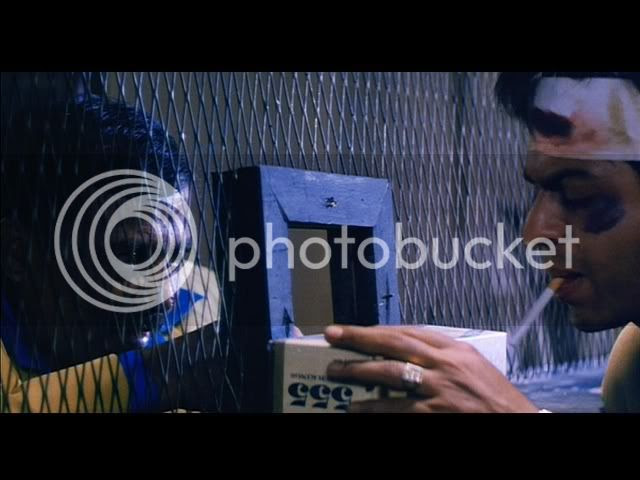 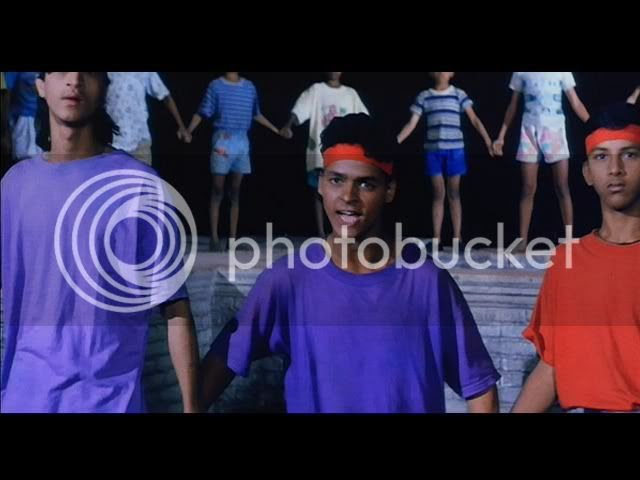 We are the world! 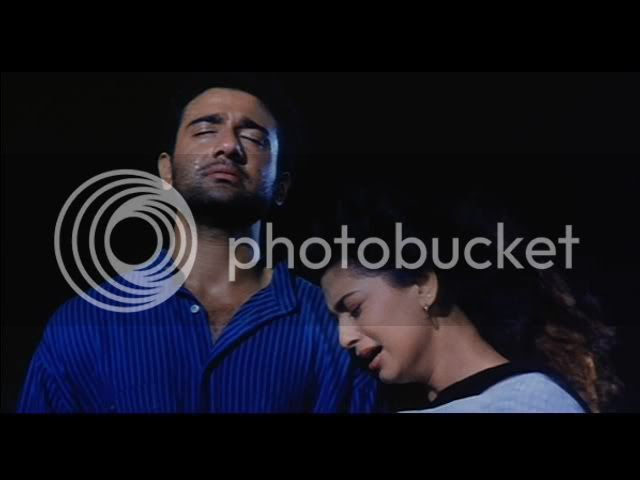 This movie is just what it sounds like: pure pulp. The pulpy vibe is reinforced by its comic book presentation: vibrant colors, stark lighting, even posters of Batman and Superman on the walls. Its themes are bleak and hopeless: the ending, in particular, is a toss-up between two awful interpretations, both too painful to accept. We assume that this bleakness, however, comes mostly from the original. What SRK brings to the role is what he had in ample quantities back in the 90s: a capacity for frenzied vulnerability, where emotional wounds are deep and obvious. In many ways, Ram Jaane is just like Ajay/Vijay of Baazigar or Rahul of Darr: protagonists who want something desperately (usually Juhi Chawla) and who are viciously denied this, usually with some emotional trickery along the way by an empty-headed tease. In all three films, SRK is the anti-hero you end up sympathizing with, even as he crosses moral thresholds which ensure his doom. 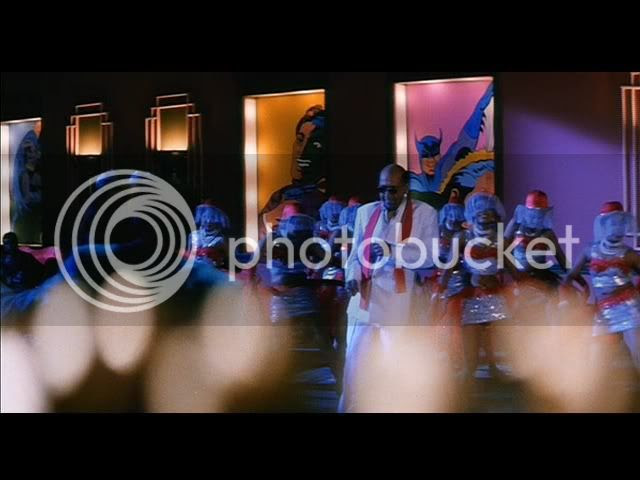 Comic book characters on the wall!

There was a lot of inventiveness to SRK's performance. As the stuttering, hyper goonda, all twitchy energy, he constantly peppered his lines with sala-a! and ending on nearly Cantonese-sounding kya-a-a. But then - finally some acting! - SRK turned this charicature on its head by presenting these behaviors as nervous mannerisms and a facade, for his scenes with Juhi were a world apart.

The character of Murli, meanwhile, was like an update of Shashi Kapoor's reformist cop from Chor Sipahee, except without Shashi's looks, charm, or empathy. Vivek Mushran had an excellent ability to look pained, but we had a bit of trouble believing he really cared for RJ or Bela or the children. And his involvement in the Bela Fiasco just further undermined his moral credibility.

Unfortunately, Bela was a disgrace to female characters. The PPCC has oft complained of mainstream Hindi film heroines: more often that not, they are vapid, vacuous and unempowered. The worst can be seen in the 2002 Devdas and Jab Jab Phool Khile - two films which not only reflect patriarchal chauvinism at its worst, but also actively preach it as a desirable "norm"! The prostition of Bela by Murli is so infuriating, it became difficult to watch. The reasoning of the film is as follows: RJ loves Bela, Bela loves Murli, Murli doesn't love Bela but worries about RJ. Murli thus decides that Bela should return RJ's love in an effort to reform him - Murli asks Bela to do this "for him" (meaning Murli), that is, to make this sacrifice of her dignity (and possibly her virginity?) for Murli, who does not even return her affections. Bela obliges, of course. But the film is ambiguous as to how far Murli expects Bela to go: what, exactly, is going to reform RJ? Faux love? Sex? Is Bela supposed to love RJ for real? Does Murli expect RJ to be fooled by Bela's fake love? Obviously not. So is it sexual? Obviously not that, either. 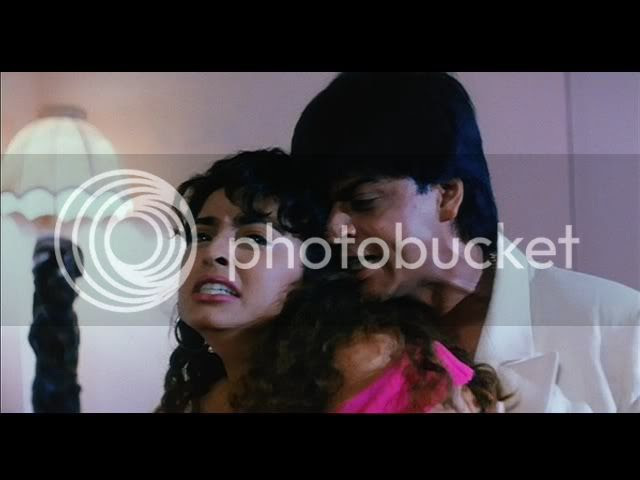 Once again, a woman is caught in the emotional diplomacies of two men. Here, after learning that Bela loves Murli, RJ decides to alienate her in order that his friend may "have" her. He does this by hitting her and calling her a whore. But then, being a sensitive soul, he suffers for it. Alas, he loved Bela.

Whatever it is, it was grotesque in a way that Juhi's similar emotional con from Darr was not. At least in Darr, Juhi's character was empty-headed but acting on her own survival instinct. In Ram Jaane, Bela is supposedly Murli's sacrificial prostitute for reforming RJ - and she's supposed to have the moral upper hand, too! Ughhhh... This aspect of the film was just terrible, almost to the point that it dragged the film down with it. Thankfully, this whole sequence - which is no doubt supposed to carry emotional resonance - is not overly milked, and so we're spared any prolonged tortures. It soured us enough though, so that what should have been some fun, pulpy melodrama actually became troublesome.

Posted by a ppcc representative at 05:37

Since it's going to take years to work through the Shah Rukh back catalog, I don't know when or if I'd have gotten around to "Ram Jaane." But your review made me bump it up to the top of my Netflix queue. What a great movie! It fits in the same place in my heart where movies like "The Warriors" reside. They're absurd, but I don't care less! Anyway, I bow down and touch the feet of your website...

Prostitution-for-morals! What a good phrase~ ..that's what I was looking for to explain my aversion to Murli & Bela's characters.

In the end, Ram Jaane who's supposedly the bad guy with a criminal record becomes the victim of emotional manipulation by two selfish individuals who're supposed to represent goodness in the story. With friends like these, who needs enemies?