Tinnu Anand's masala thriller Duniya Meri Jeb Mein (The World In My Pocket) is a slick, fun circus. We highly recommend it for fans of Shashi Kapoor, Rishi Kapoor or Neetu Singh, as all three icons get ample space to shine. Even Rishi, who we normally make gagging faces at, impressed us with his charm and actorly pizazz. Yes, really! Read on. 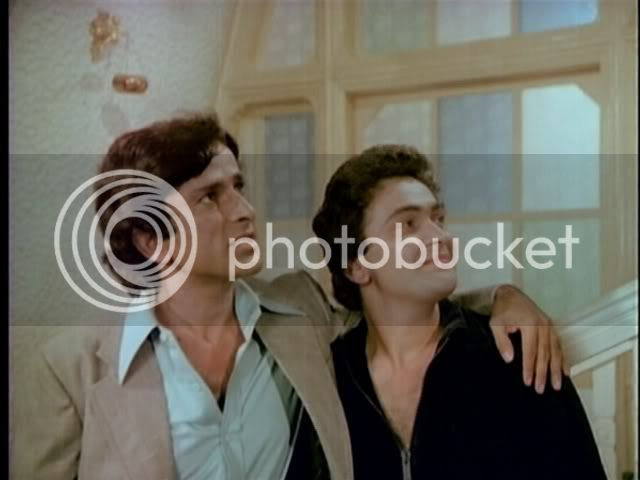 OMG but Shashi is still the mega finer of the two.

Duniya is, above all, a story about brotherly love. Apparently parentless, older brother Karan (Shashi Kapoor, real life uncle, PPCC darling) is constantly looking out for his younger brother Vishal (Rishi Kapoor, real life nephew, kind of lame but sometimes OK). In fact, Karan leads a double life: in reality, he is a poor trapeze artist at the local circus, but he pretends to be a big-shot businessman for his brother - spoiling him and never letting onto the fact that his pockets are empty. Alas, poor, beleaguered Karan constantly struggles to maintain this charade. Vishal, meanwhile, is a happy-go-lucky student at the local college. One evening, he spots a pretty girl, Neeta (Neetu Singh), struggling over the wall of the girls' dormitory. The two are immediately smitten (tho thweet) and, after a fun courtship which involves kinky disguises and a song, Vishal proposes to her and invites her on a trip with him to America. 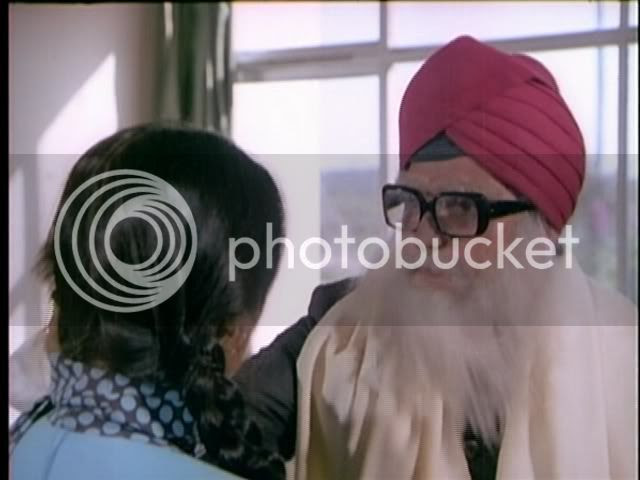 They're so kinky, these two. 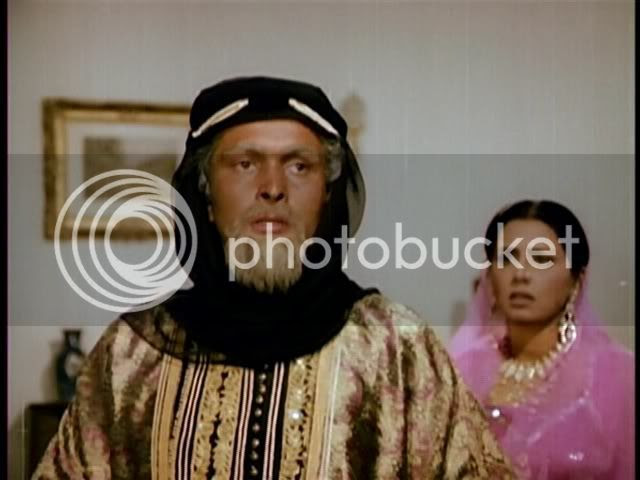 All of this stresses the income-challenged Karan out big time. Even with the financial help of Mrs. Robins (Nadira) and some random friend, he is super anxious that Vishal will find out that he is a mere trapeze artist (or, as the film subtitles keep calling him, a funambulist). How will he pay for the wedding? And the trip to America? Mother of God. At the engagement ceremony, Karan even gets totally wasted and announces to everyone, "I am not rich, I am a funambulist in the local circus!" But alas, everyone thinks he's just joking and/or being philosophical and/or just wasted and/or they don't know what a funambulist is either, and so no one pays him any heed. Meanwhile Vishal's still waiting for the plane ticket. 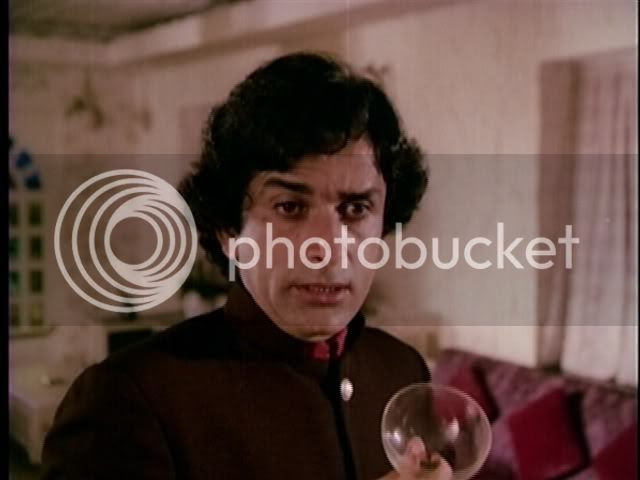 Meanwhile, Karan's no-good trapeze partner, Rawat (Ranjeet, ugh), gets roped in to do a high-stakes theft by some random criminal boss. Rawat figures that the only way he can get from building A to building B, where the money is, would be to trapeze across, but he needs the help of his partner, Karan, to do so. Knowing Karan is desperate for cash, but not desperate enough to commit a crime, he lies to Karan and tells him they're saving a little wounded kitten in building B. Or something. Anyway, Karan agrees, because he is a liberator of cuteness in all forms, and they trapeze across in a cool funky Ocean's 11-style sequence. 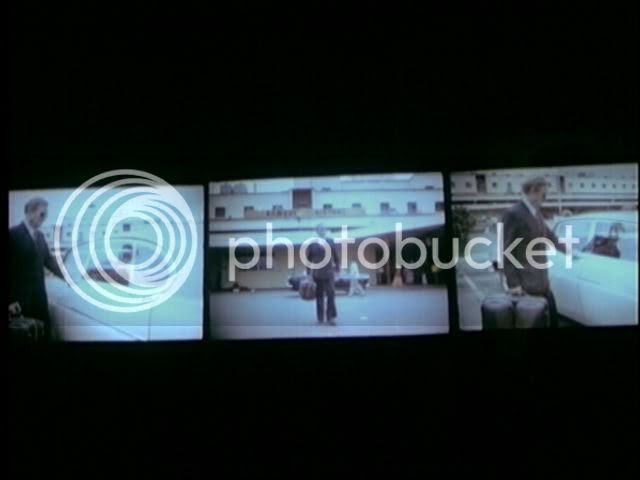 OMG this part was so cool. We wish we had 3 slide projectors! 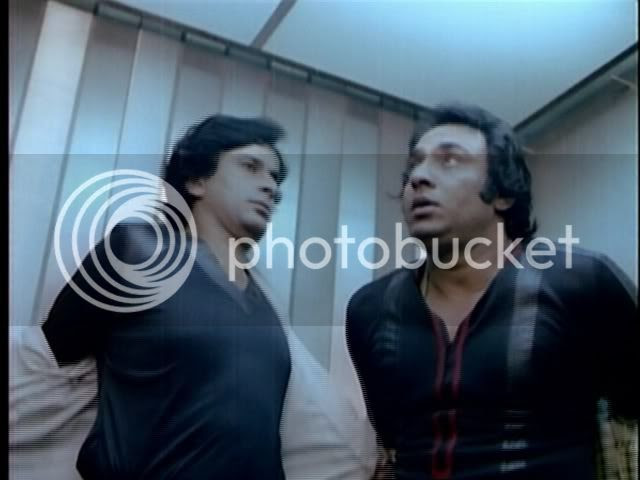 OMG the jazzy music here was really cool too.

Once there, Karan realizes he's been duped, and some scuffling occurs. This unfortunately ends in a spectacular fall where Karan is bashed against some concrete, falls ten floors, and is then run over by a truck. (Remind you of someone?) Yet fear not, Shashi Kapoor fans, he lives! It's now up to baby brother Vishal to seek revenge against the treacherous Rawat - this involves yet more disguises, more trapezing, more scuffling, and more songs.

The high point in the film is the shocking state Karan is left in after his spectacular fall. We will give nothing away, because the shock value is really priceless, but here are some of the reaction shots: 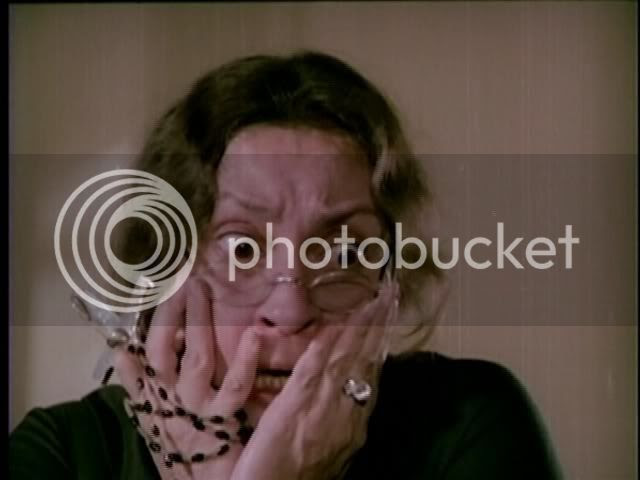 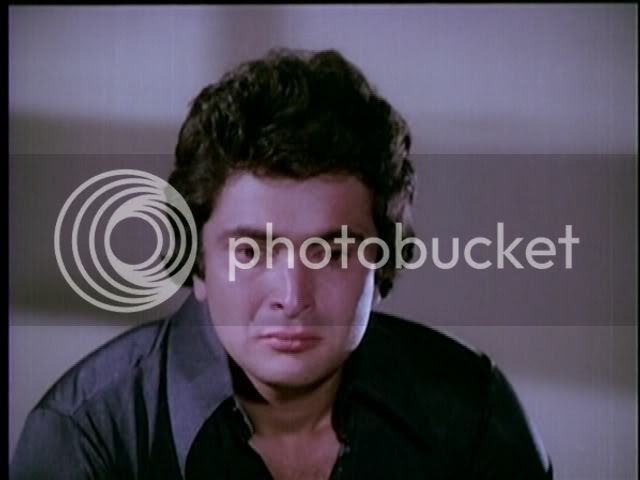 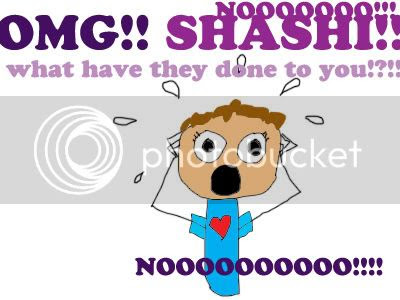 Indeed, SO SHOCKING is this plot point that it changes the tone of the film entirely. Suddenly the usual masala revenge becomes much more urgent because, dammit, look what they did to Shashi!

Tinnu Anand - the wonderful character actor from Ram Jaane, Bombay, and Laaga Chunari Mein Daag - is a very skillful director, knowing exactly how and when to yoke sympathy/horror from the audience. In brief, his melodrama is pitch-perfect. This is also where the skillfulness of Rishi's acting comes into play. OK, we admit that we laughed and laughed and laughed during the hospital scene, because it was just such juicy, hilariously opera-style melodrama, but we also had to marvel at Rishi's capability of looking truly, horribly aghast. Rishi seems to have inherited Shashi's fab ability to register shock. Yeah, Kapoor genes. The later scene, where Rishi has to carry the wounded Shashi out of the hospital, was also wonderfully operatic - just look at Rishi fighting the tears! 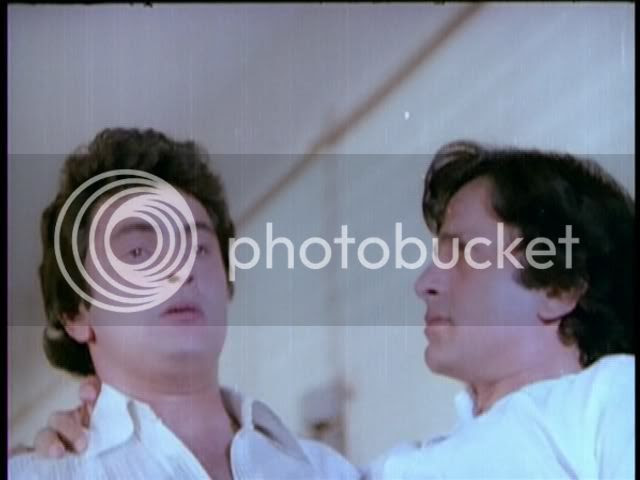 Then there's another scene which genuinely stabs you with its pathos: Shashi is being driven back home from the hospital and, at the intersection, he is approached by a beggar. We can't give too much away, but the irony of this situation is truly poignant. Yay, Hindi movie convention of poignant irony!

There's yet more fun to Duniya, apart from the Really Shocking Thing. First, the ishtyle! Everyone is looking their fabulous best - Shashi is trim, his hair is wild and free, his smile is almost comically shiny. He even gets into a number of scuffles, for those you that like your fruit a little bruised. Even Rishi, who we normally think looks like an idiot, has great hair and great shirts and a muppet-y bounce. Yeah, Kapoor genes. Neetu is lovable as usual, and she gets to sport some truly bad-ass outfits, as well as some truly bad-ass dancing. It goes without saying that, as sweet as it is to watch real-life husband and wife Rishi and Neetu cavort among flowers onscreen, it really was a damn stupid shame that Neetu retired at the age of Too Young. Anyway. The set designs are likewise fun and retro, in fact, in more than one scene we were distracted by the cool paintings in the background. 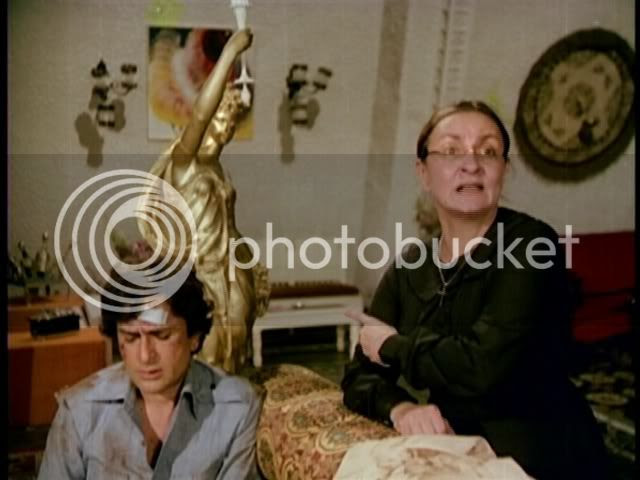 Aww. He is my little bruised pear. (Side note: check out that art! Yeah room deco!) 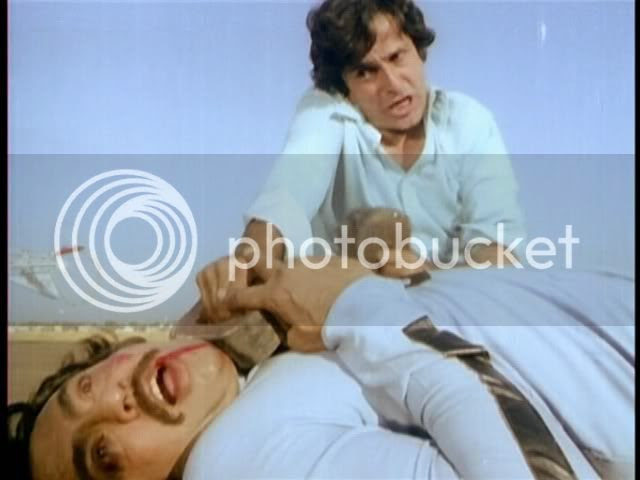 Our only criticism would be somewhat lacklustre songs. Usually, all it takes is one good song to make a film, and it's unfortunate that a movie as fun and over the top as this one should have had such mediocre songs. Ah well, you can't have everything. (Except sometimes you can!) 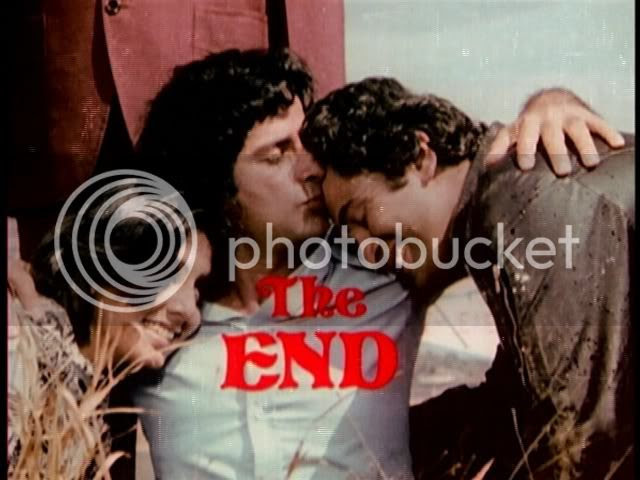 Calling all Kapoors in the house for a group hug!
Posted by a ppcc representative at 21:58

What a great post! Makes me look at the movie in a completely different light. I saw Duniya.. a few months ago and didnt like it all - mainly because Shashi didnt get to romance a girl and that is such a waste of a movie! Now that your review has pointed it out, I can remember all the fun bits that were overshadowed by my disappointment. The trapeze stunts were GREAT and quite amazing for Bollywood of those days. Rishi and Neetu were cute as always, but poor Shashi.... :(

By the way, I have put up reviews of some old Shashi Kapoor movies on my blog Old is Gold. Do check them out.

Your review is a work a funambulism!

I have an abashed fondness for Rishi, because he's just so baby-faced and dorky. In "Bobby," he has to be one of the most unlikely screen Romeos ever. And yet, he has that air of confidence. Must be: when you're born a Kapoor...

But Netflix is letting me down on the Shashi oeuvre. Bad Netflix!

I consider myself if not PPCC's #1 then somewhere in the very top tier, and I have to say, this might be your finest review yet. Obviously the choice of subject doesn't hurt - Shashi! Neetu! I need nothing more than that! But am always happy to have an enjoyable Rishi! - but damn!

Second, mega-rawr Shashi (expertly captured in screen shots)! Left, right, and center. Clearly I need to own this. That first picture with Shashi and Rishi together? Yeah. Rishi has been SCHOOLED. (You might enjoy my post on Bollywood Fugly about Kapoor avuncular fashion in Doosra Aadmi [which, by the way, you should definitely see].)

Third, "actorly pizazz," "liberator of cuteness," and "bruised pear." (That is a very fine picture, by the way.)

Fourth, that second-to-last photo is very...um, what's the word in art history that talks about how there are often triangles in paintings? Look at all the drama flowing from the top center out of his expressive face down through the "canvas" into the tools of violence still gripped in his hands! And then the wee trickle of blood! And the tension of the figures is offset by the clear open sky! Wow!

Anyway. Thanks to you, I can't wait to see this!

PS Seriously about the portraiticons.

I totally love this film, it is masala goodness all the way! I love the shock-reaction screen shots too :-) Poor Shashi did suffer terribly.

But all's well that ends well! Neetu is fabulous in this too (well, she always is)...

WOOOP WOOOP WOOOP That's the siren at the Ministry of International Relations at Shashi Pradesh alerting you to the most fantastic fact that I just discovered that I already own Duniyia Meri Jeb Mein! I went on a Shashi movie-buying spree a few months ago and just grabbed a bunch of stuff at DVD Dhamaka, almost willy-nilly, and this was among them! It is next on my list to watch.

Bollyviewer - Just checked out your blog; now I MUST see Prem Patra. Yeah, the trapeze bits were great, though I don't think I'll be able to shake the image of Ranjeet's gut hanging out.

Anarchivist - I usually only accept Rishi as an older fatherly type figure (e.g. Fanaa), never as a romantic hero (e.g. Kabhi Kabhie, uughhhh). But that said, this movie is making me revise my opinion a little. I might - MIGHT - submit myself to Bobby. If Netflix lets you down, I would suggest Nehaflix! That's for buying only. I think Beth and Filmi Geek know of online Bollywood rental places, too.

Beth - Aww, man, thanks, B! Yeah, Rishi looks like an idiotic muppet next to the fire of the Shash. I have indeed seen the Doosra Aadmi post at Bollywood Fugly and I LOVE it, it is my def fave. I actually forwarded it to several friends who I knew would appreciate it. Funny that you should mention triangles; was just watching Rashomon with the commentary on, and the guy was practically having a trianglegasm over the imagery. I never realized how ubiquitous they are in film! Man, I knew you had Duniya, b/c I remembered reading a comment where you mentioned it - now you def must watch and post your thoughts! It is hiiiilarious.

Will investigate the portraiticons, though the PPCC is generally camera shy.

I'm just at 00:03:58 in, and am already fanning myself at the fire of Shashi, as you so aptly describe it. Am I going to be able to survive this film?

I want to be a funambulist.
unless i get sick of heights of course, in which case it may not be so much fun anymore.
rofl

i loved ur review- thanks!