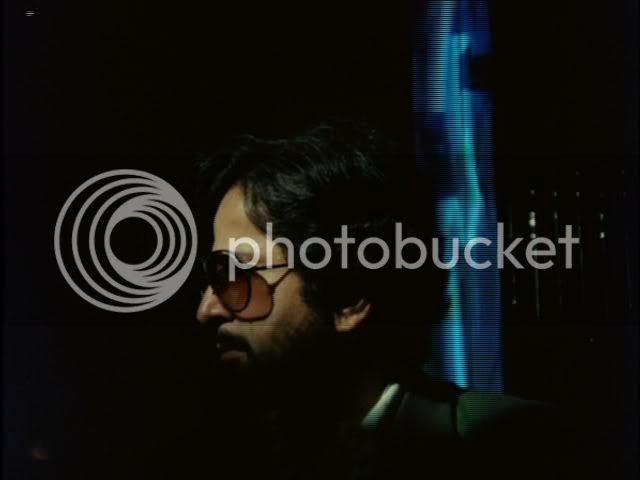 A splendid shot of our beloved Shashi.

You can measure the Golden Age of Masala's rise and fall using two yardsticks:

As the hair gets longer and the physique gets svelter, you can rest assured that you are striking gold. But if you're starting to notice Shashi's wobbly lovehandles or wibbly jowls, and his hair's all short and tame, then it's likely that you've hit something post-1978 and the genre is in decline. Woe unto you.

In 1982's Sawaal (The Question), Shashi is lookin' old and he's lookin' tired. Like Namak Halaal, released the same year, Sawaal is an attempt at one last wheezy huzzah before the beautiful masalaness of 1970s Bollywood fully expired. Goodbye, beautiful decade! Sawaal, however, has none of Namak Halaal's self-referential good humor. Instead, it is lugubrious, almost dirge-like, inevitably provoking in the seasoned masala veteran a sharp nostalgia for the days of yore.

It is practically a rehash of Trishul, made five years earlier, except one key component - Amitabh Bachchan and his angry young man alter ego - is conspicuously missing. Another component which is missing is Shashi's usual joie de vivre. This is a problem. With one notable exception, overly serious Shashi Kapoor roles either fall really flat or fall outside of Bollywood altogether. It's not that he's incapable of projecting depth. It's just that there was always a healthy dose of optimism to balance things out. Even when faced with moral tangles on the job or rendered temporarily blind, Shashi always came out smiling (well, eventually). Yet in Sawaal, even his rare smiles seem strained. 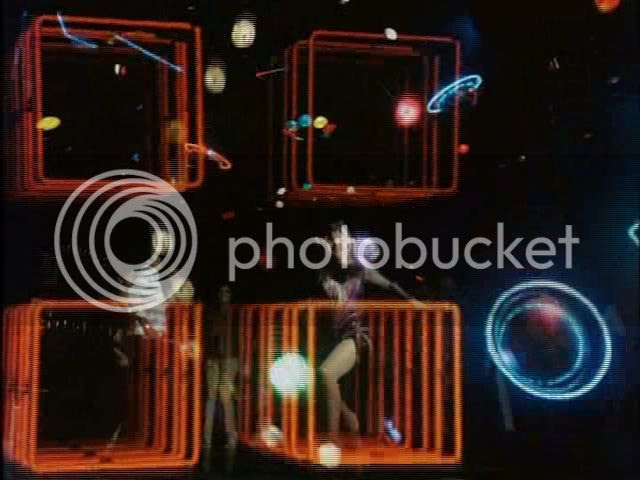 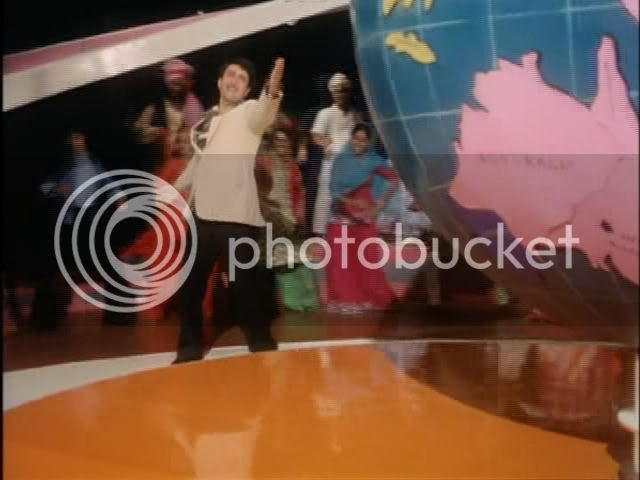 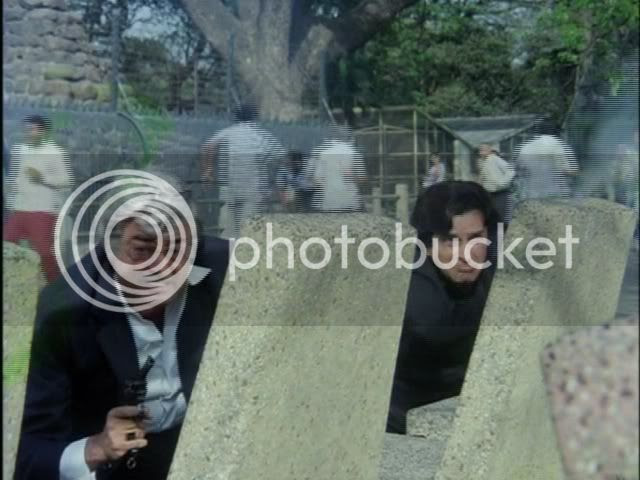 The most bad-ass scene.

OK, OK, the plot: straight-laced cop, Ravi Malhotra (the Shash), tracks smugglers during weekdays and frollics in the park with his girlfriend, Sonia (Poonam Dhillon), on the weekends. Unbeknownst to them, Sonia's father, Dhanpatrai (Sanjeev Kumar), is a big-time smuggler. But no one knows - not even Dhanpatrai's loyal wife, Anju (Waheeda Rehman...?!), or his boisterous son, Vicky (Randhir Kapoor). When Ravi proposes to Sonia, the family is eager to meet him. But slowly this house of cards crumbles, as real identities are revealed, lives are lost, and, as Al once said, when he tries to get out, they pull him back in! 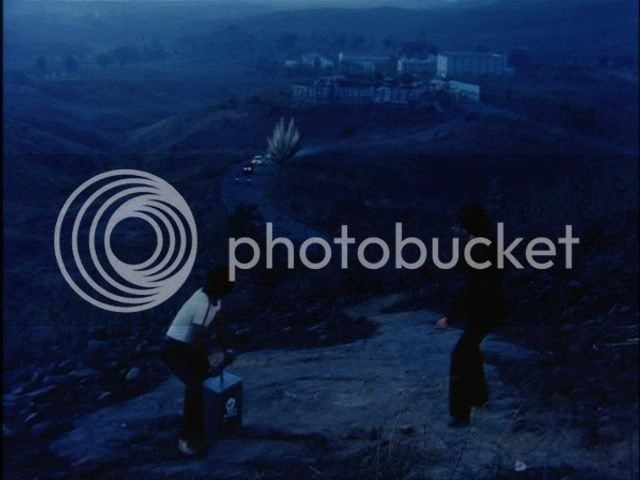 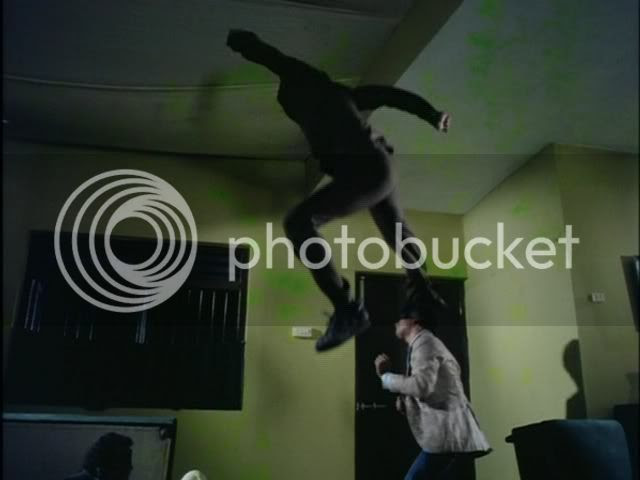 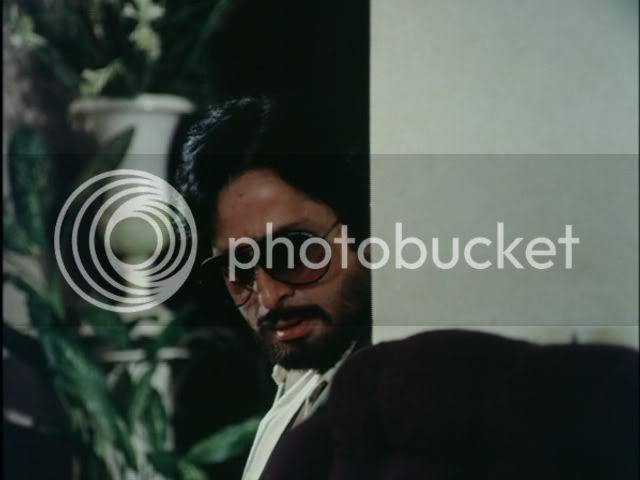 So it's basically Trishul, except nephew Randhir is playing the usual Shashi spoiled-son role, and Shashi is playing Amitabh's usual hard-edged bringer of justice. Sanjeev Kumar looks like he just wandered off the Trishul set: identically floppy silver hair, cigarette holder, big glasses. In a pleasant surprise, however, Sanjeev kicks butt in Sawaal. Not only does he look quite fit in his white suits and rhinestone-encrusted bowties, but he's also honed the Good Or Possibly Deceitful OK No Really Good archetype to razor-sharp perfection. He's great: from laconic evil in the beginning to, well, laconic good in the end. You go, Sanjeev!

The film also shares some similarities with Kasme Vaade and Chor Sipahee in that there's a strong Christian undercurrent. Themes of forgiveness, prodigal fathers and martyrdom run amock while blunt Christian symbols look on: check out the wall furnishings in Dhanpatrai's office (Orthodox Christian paintings), or the crucial meeting-place between Dhanpatrai and Ravi (see below). 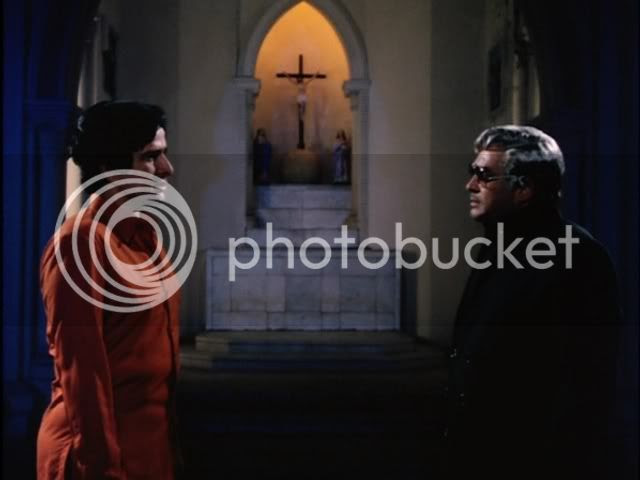 Despite the funebreal air of glory gone by, the filmmaking is actually quite crisp. The narrative moves along well - indeed, the plot bulldozes this film along without pause for some fun or some heart - with especially effective cross-cutting used here and there (e.g. Shashi kicking some dude's butt on a train, while Randhir sings his initial love ballad). The sets also looked surprisingly hip in a non-ironic way, with narry a tacky accessory to be found (OK, Sanjeev's rhinestone bowtie was a bit much... but we loved it!). And we should also note that this was the first (!) masala movie where the action actually made our heart stop! Very thrilling.

Yet even these moments of action, these moments of trendy art prints up on the wall, cannot rescue the film from itself. The final fight - as usual, a free-for-all with little bearing on the plot or characterization - seems slowed down to the point that we could just imagine the actor counting the beats under their breath, "1... 2... I move here now." 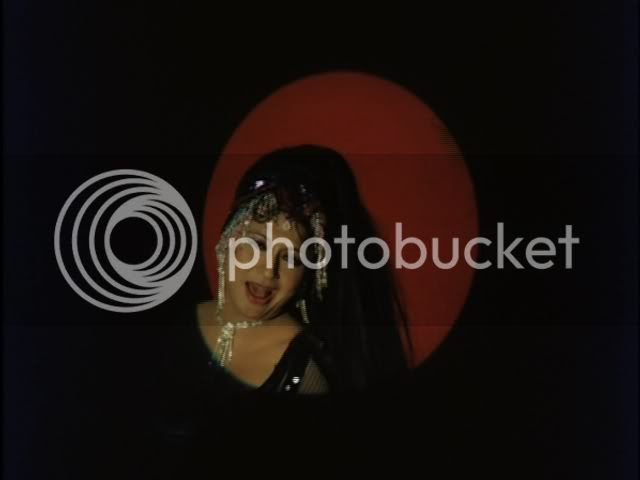 Helen has a cameo.

Apart from the sad Shashi and the super Sanjeev, the rest of the cast is as expected: Waheeda Rehman is too good to be in this film, Randhir Kapoor not only hams but channels his father hamming, Phoonam Dillon is forgettable, and Mac Mohan is DA BOOOMBZ. The songs are likewise forgettable, though, again, the cross-cutting makes them pretty spectacular in terms of narrative drive. We especially enjoyed the one scene where a character declares that Shashi must die, and we immediately fast-cut to Shashi and Phoonam in the forest, with Shashi singing, "I live and I die, and I lo-o-ove you." Yeah, irony!
Posted by a ppcc representative at 03:36

I'm going to have to watch this just for the neon cages!

Must see this. Moratorium on shopping for movies still in effect. Nahiiiin!

I LOVE the picture of Shashi with shades and a beard - it's like he has channeled Amitabh directly. It's like Shashitabh is such a powerful force that it has imploded and left us with just the one person who is somehow both people, still capable of each person's full powers yet physically condensed. Is it like that in the movie? 'Cause it sure looks it.

Sooooo... (she asks sheepishly): what movie would you recommend to a complete Philistine who has yet to see a Shashi film? Where would you begin your introduction?

Beth - Guh, Shashi in a beard, I know. Yeah, he's quite Amitabhy in the film, which is impressive, but may or may not be your cupcake. It's not mine particularly, I like my Shashi Shashish, and it's pretty rare that a stony-faced Shashi wins my heart. Still, he is SO fine in this one. (Despite the lovehandles.)

Anarchivist - GASP! A virginal Shashi viewer. I'd say, if you see one Shashi movie in your entire life, make it Aa Gale Lag Jaa. That movie is just a pure, unadulterated Shashfest, and his powers of hotness are on high. At the moment, my favorite Shashfest is actually Chor Sipahee, but that one's very different from his usual fare (and the DVD copy available on Nehaflix.com has crappy subtitles). Or else try more socially-minded Shashis in Immaan Dharam and/or Kaala Patthar. Hope you can join us in Shashi Pradesh!

Doesnt sound like a movie worth watching (Most of the Shashi-Sanjeev pairings in this period were disappointing - Mukti, Trishna and Swayamvar.)! However, since it is lying on my shelf and does have Shashi, I will do my duty and watch it. ;-)

Hey arent those the neon cages from Kalyug?

Hey, I liked Swayamvar! I was just writing up the review, happily clacking away on my keyboard that it was sooooo lovely when they reprise that one song with Shashi and what's-her-face and he wipes his forehead on her shoulder. OMG that moment was beautiful.

I've been thinking over your yardsticks, and I think the hair rule is a little tricky. Yes, there is post-1978 short hair, often signaling bad things like Commando, but there is also pre-mid-70s short hair, and that can be very good, like Sharmeelee, or very bad, like Satan himse...I mean Jab Jab Phool Khile.

So varied are his roles that we can't even say short hair + thin waist = either universally good or universally bad, as the above examples show.

Sigh. Good thing we have a federal government at work on this. The Shashi Pradesh Institute of Standards and Technology's Weights and Measures division has a lot of work to do.

I am finally watching this - right NOW when I should be going to bed - and I love it so far! I'm only 11 minutes in, but still. So funky! So bad-ass! So having of a suspect interrogation as a monologue!

And now I'm 27 minutes further in and much less impressed. Randhir Kapoor is SO ANNOYING. He reminds me of a hyperactive squirrel.