Bollyviewer said it best in the comments of Kanyadaan:

This movie gave a whole new dimension to female oppression. Most other movies had the heroine oppressed by cruel people or circumstances but here she manages to oppress herself with no help from the world at large!

All we can say in reply is, OMG, BV, wait til you see Bezubaan. 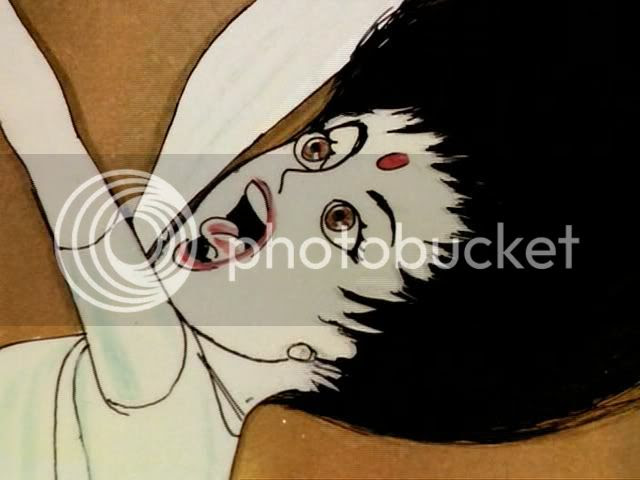 First, a small disclaimer: it took the PPCC approximately four months to watch this movie. We started in December, got bored, and resumed in May. This is ironic, given the age differences in the film (see below). 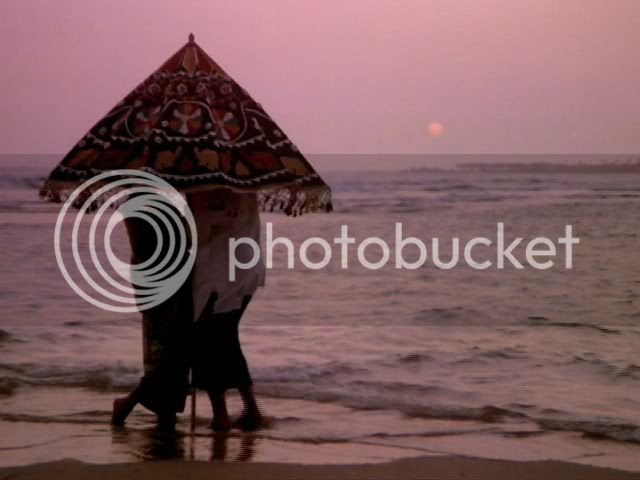 You can't see under the umbrella, but they're May-Decembering it right there, man!

Once upon a time in the 1980s, there lived a college student, Kalpana (Reena Roy). Kalpana was just your typical, bashful, coy, sharmili-ing Good Indian Girl. One day, she met this cute guy, Cute Guy (Raj Kiran... maybe? IMDb doesn't know). Cute Guy seemed really cute, and generally was, but, like all guys apparently, was also a sexhead. Because of Cute Guy's pressuring and Kalpana's lack of personality, Kalpana and Cute Guy did it. Kalpana then cried and cried and cried, and CG promised they would wed. But, alas, Kalpana waited and waited and CG never came to the college again. She resolved to kill herself. She failed, thanks partly to the good deeds of her more liberal-minded doctor, Meerabhai (Rita Bhaduri, possibly). Doctor Awesome proclaimed, "Go, child, go! Live your life! It is my gift to you!" 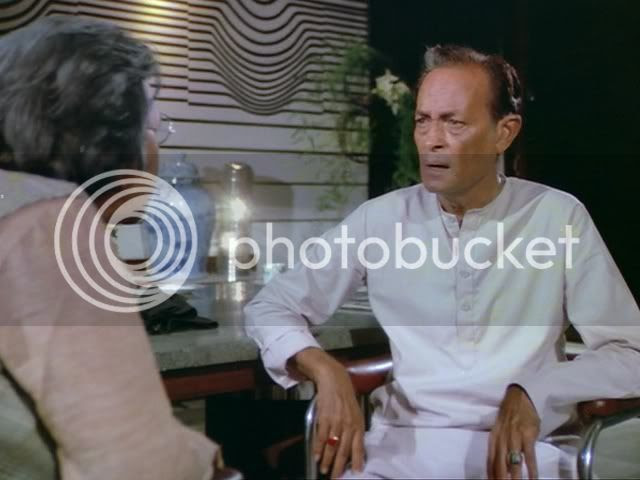 Fast forward. Kalpana's dad (IFTIKHAR, OF ALL PEOPLE) decides it's time for Kalpana to wed. He finds a suitable match, some rich guy, and encourages Kalpana to meet him. Kalpana says, "No." Dad says, "Well, just take a look at him, first. There's no harm in looking, right?!" Fast cut to Shashi Kapoor's smiling face. Kalpana is sold (no surprise there), and they get married. 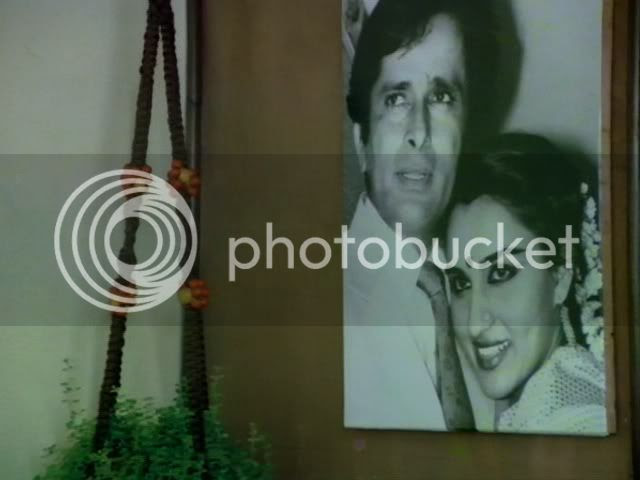 And they blow up their wedding photo to a freaky size.

Finally, Kalpana has found happiness. Her husband is none other than the unbelievashashly fine Shashi Kapoor, who is rich, eternally good-natured, and madly in love with her. He is just so freaking cute. And he doesn't seem to mind that his wife is a mute who does nothing but faint and cry. Does this woman even have a brain?! 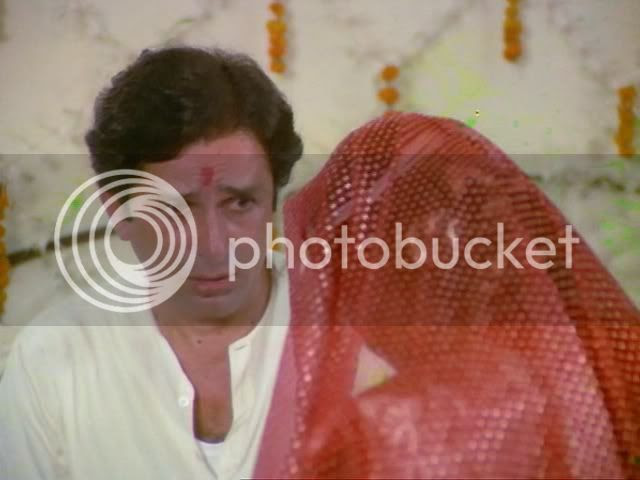 "If you keep crying like that, I'll start crying too." 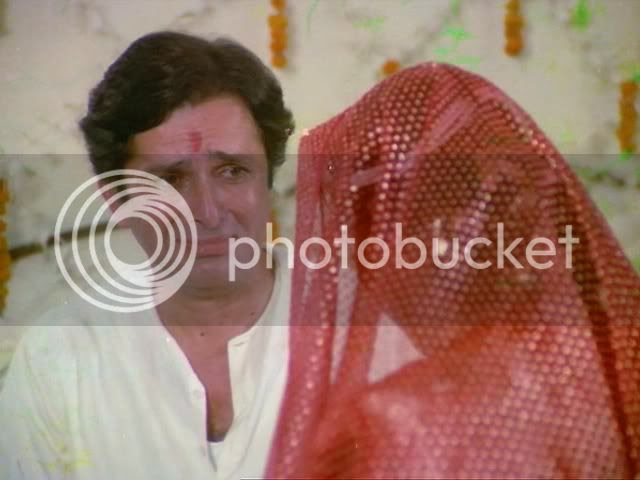 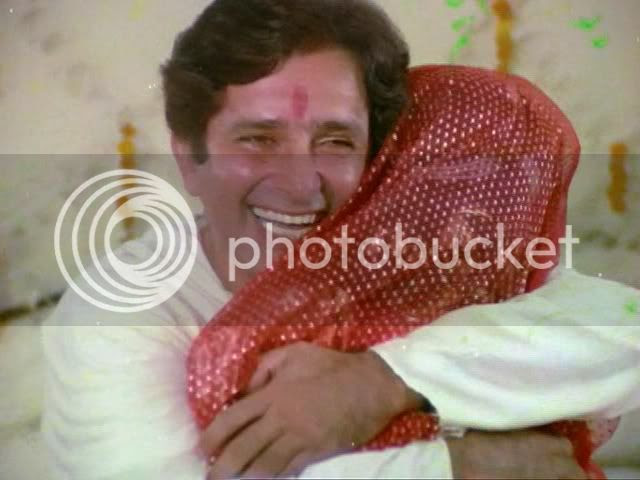 They have a son. All is well. But then (cue dramatic music) an evil, unscrupulous, snake-in-the-grass photographer, Shivnath (Naseeruddin Shah), appears. In Typical Hindi Irony, Shivnath is married to Kalpana's old college friend. In Further Typical Hindi Irony, Shivnath has in his possession a photo of Kalpana and Cute Guy getting jiggy with it. (We can't remember how he got this photo, we watched that part in December.) Anyway, once Shivnath and Kalpana realize this, Shivnath begins to extort huge sums of money from her. Much stress. 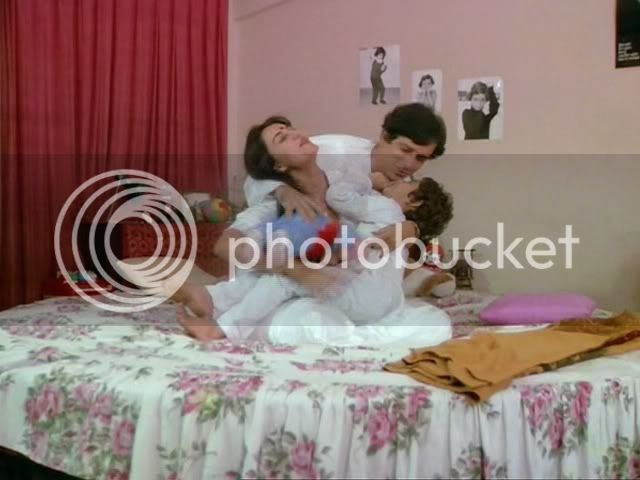 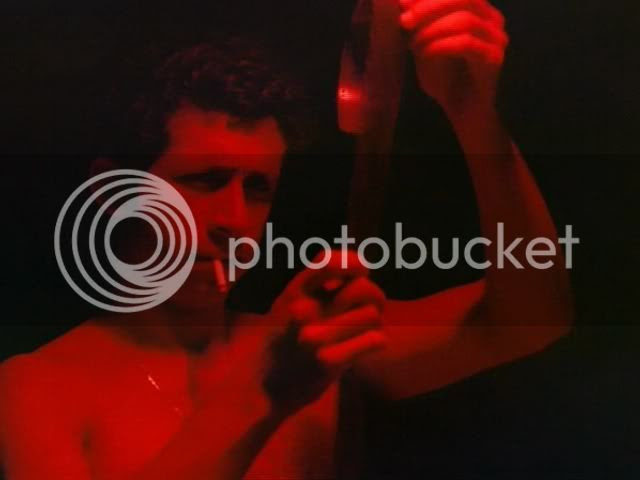 Naseer arrives, and then finds his old negative of that photo he took in December. 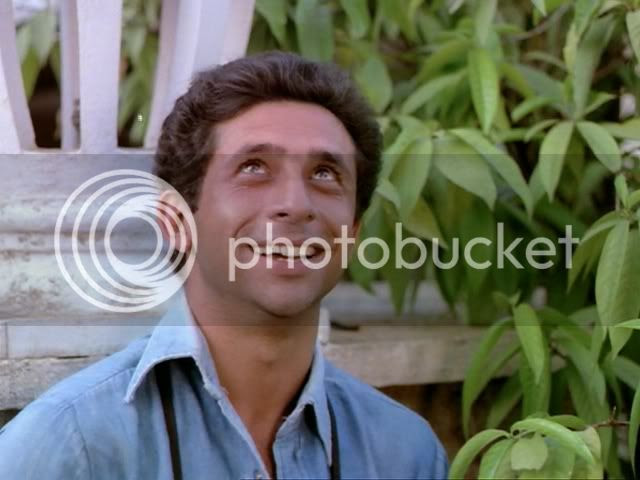 And thanks God. He actually talks to God a lot in this film.

It all comes clanging up to a facile climax which, like Kanyadaan, manages to deflate all the narrative force in one fell swoop, like a flan imploding. This is a damn shame. The film, also like Kanyadaan, starts very strong. It remains strong until literally the last five minutes, when suddenly we learn that - yet again - the heroine was just being an idiot (yeah, she seemed like one) and just oppressing herself for oppression's sake. For a movie that seemed so intelligent and cunning and savvy regarding gender norms in India, we were so disappointed. So disappointed.

Because the film is just, like - guh! What imagery! What symbolism! What refreshing intellectualizing! Sure, it goes for your brain with a battering ram, but we still appreciated and gushed over the intelligent little shots. For example, the fast cut to Shashi after Iftekhar's comment ("Just take a look at him and see if you don't change your mind!") - such a fun play on his iconic romance status. Or the decorations in Cute Guy's house (Kama Sutra, paintings of naked women, sex stuff, a scorpion!?) versus the decorations on Kalpana's dorm room (posters of babies, babies, and yet more babies). Or the moment when Naseer, who plays the evil Shivnath with much villainous glee, tells the Shash-Kalpana, "You two look so happy, we should protect you from the evil eye." And then snaps a picture.

It's stuff like that that we at the PPCC just love. So we were getting more and more impressed and pleased until, as we said, the ending comes crashing down into the worst of mainstream Hindi filmi proselytizing. Haven't we seen all this before? 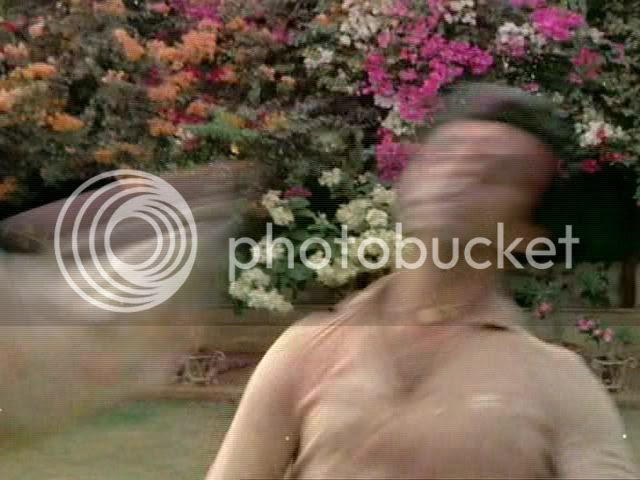 Another major beef we had with this movie were the characterizations. Consider the male characters:
1. Naseer, the Villain - unscrupulous, ambitious, but ultimately misguided, driven by his desire to give his family a better life, a bit petit bourgeois
2. Shashi, the Husband - eternally forgiving, even-tempered, fun and emotionally involved
3. Cute Guy, the Lover - also eternally forgiving, even-tempered, courageous and emotionally mature
4. Iftekhar, the Dad - well, he doesn't do much really.

Meanwhile, the female characters:
1. Kalpana - massively misjudging things, emotionally childish, a bit of a fainter, no discernable personality
2. Vidya, Kalpana's College Friend - largely unimportant to the plot, the only action she takes is to pour gasoline on her daughter and herself with intent to set themselves on fire because... she's mad at Naseer?!
3. Doctor Awesome - the only woman with a brain in this.

So while this film is ostensibly about women's issues, and the protagonist is female, it is only the men who are portrayed as rational and mature and, well, somewhat normal.

Why was this movie made? It's just a big heaping pile of Virgins and Whores. Kalpana spends the entire movie fretting that she had sex once before marriage, apparently "staining" her into Whoredom. Her husband, while meaning well, attempts to coax her into revealing her background by telling her about his own premarital affair; yet he paints his first sexual encounter as being with an unscrupulous secretary who only used him to get ahead. Umm, like a Whore. So it's always Virgins and Whores. Ugh!

And this seems particularly conservative considering other Hindi films we've seen. Just compare this to the whole premarital sex issue in other Hindi films, regardless of period. In the excellent and much older Awaara (1951), there is a famous scene where Nargis sings to Raj Kapoor how she'd basically like to do him. The film doesn't portray her sexual needs as making her a whore, rather it's all very romantic and erotic and adult. Indeed, at the end of the song, Raj relents and it's very sweet. Nowhere in the film does the couple then concern themselves with, "OMG, we did it without being married." Similarly, in the more recent Jhoom Barabar Jhoom (2007), Preity Zinta's character recounts how she did it with hunky Bobby Deol (also after a song, Kiss of Love). She is not demonized for this, either.

So why all this fuss, silly Kalpana?!

Anyway, three of the songs were absolutely fab, the cinematography was also fab, and it was just lovely to see a young, handsome Naseer next to an admittedly aging Shash, if only because we love both of them.

Editor, the next day: Just found the two songs I liked: the sweet domestic heaven one, and the I'm the perfect husband ever one.
Posted by a ppcc representative at 23:14

Great review! Women do have such a hard time in Hindi cinema. They really can't win. That's why Hema Malini is so great---she managed to be the Good Girl AND kick ass and stick up for herself all at once.

But heroines (and roles!) like her are few and far between...

But is that the fist of Shashi dishooming Naseer? 'Cause that would be teh awesumz. I would pay big money - $6.99 plus shipping and handling! - to see that.

Hey, you dont mention Shashi's miraculously restored teeth. In Do Aur Do Paanch the front teeth were practically gone and then in Kalyug and here they are back again!!! He did look very good, inspite of the May-December thing. Have to admit that I liked Nasseer better though - he was a lot more interesting than Shashi's sweeter-than-sugar character!

Memsaab - Ah, Hema. You're right. She was a bad-ass, wasn't she? And Neetu was a bad-ass too. I miss them both. Will go watch Sholay and Kaala Patthar.

Beth - Unfortunately, it is not the Fist of Shashi, but it is instead Cute Guy who is doing the punching. It's quite an interesting match; Naseer was so fit in 1981, he just THROWS himself into it.

Cant believe you didnt notice how Shashi's hair length is inversely proportional to the length of his front teeth. Throughout the 70's his hair got longer and teeth got shorter giving his legendary smile a slightly vampirish look (check out Satyam Shivam Sundaram and 2+2=5). Then come the 80's and his hair are clipped and his teeth grow back!

And yes, he was great as the adoring husband but Nasseer as the evil guy was so much more fun! Its too bad Shashi never played the wicked guy except in Bombay Talkie. He'd have made an interesting playboy villain.

Gasp!! You mean Shashi's big beautiful canines - source of the PPCC's love of Shashi - are the result of bad flossing?! I always thought that was just how they were, and I guess I haven't seen enough 80s/90s Shash to notice the difference.

Shashi was pretty evil in a subversive way in Jab Jab Phool Khile.

OMG. I just can't get over the teeth thing now.

Has your idol developed feet of clay now that you know he didnt floss? ;-) Thought you'd have noticed how in 60's and early 70's movies Shashi's incisors are conspicuous by their presence (see Jab Jab Phool Khile) and equally conspicuous by their absence in late 70's. (I have clearly spent too much time looking at our mutual favorite!!!)

He is kind of evil in JJPK but I usually pretend that the latter half never happened - makes the movie quite nice!

I must see this! A currupted Reena forced to marry Shashi, and Naseer as the villain???? Its movie gold.

I'm with SMG--Naseer covers a multitude of ills. Even the very scary psychidelic cartoon which has made me afraid to go to sleep tonight.