Perfect. PERFECT. This was exactly what we needed. 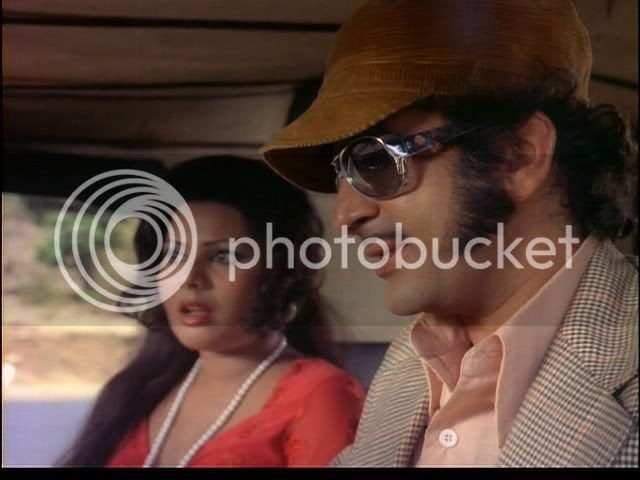 The crazy retro fashion of this film comes full circle and becomes incredibly trendy by today's standards. I mean, they sell those hats in hipster stores.

We bought Salaakhen after seeing the cover for it, wherein one Shashi sits behind bars, while a second Shashi - with HUGE sidebearns and a moustache, no less - seems to lurch drunkenly out of the frame. We know what you're thinking. You're probably thinking what we were thinking: How wonderfully sleazy! Clearly a must-see.

But we've been going through such a bad patch of Shashi movies recently, so we were a little worried too. We couldn't have coped with yet another bad Shashi movie, and especially not a mis-masala-ed movie. 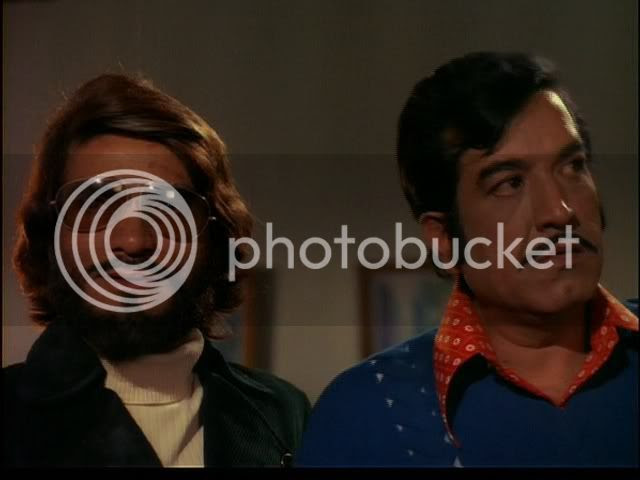 It's Mac, yes! This villainous duo is called Abercrombie & Fitch, since that's clearly where they shop.

So, what a relief when Salaakhen delivered exactly what it was supposed to! Salaakhen comes from a long line of illustrious masala funk. It shares similarities with films like Chori Mera Kaam (1975), Parvarish (1977), Suhaag (1979), Kasme Vaade (1978), Chor Sipahee (1977), Duniya Meri Jeb Mein (1979), and so on. We have such reassuringly familiar tropes as: the prologue wherein loved ones are separated, cops and robbers, courtesans, incredibly awesome retro 70s fashion and interior design, dishoom dishoom, several villains, men in high-heeled platform shoes and - last but most importantly - big, squishy, masala heart. For the seasoned masala viewer, everything falls into place as it should. And we get the added bonuses of disguises which are actually cool, a populist comedy subplot which is actually funny, and action scenes which are charmingly low-fi. Ah! What nostalgia! We were born too late! 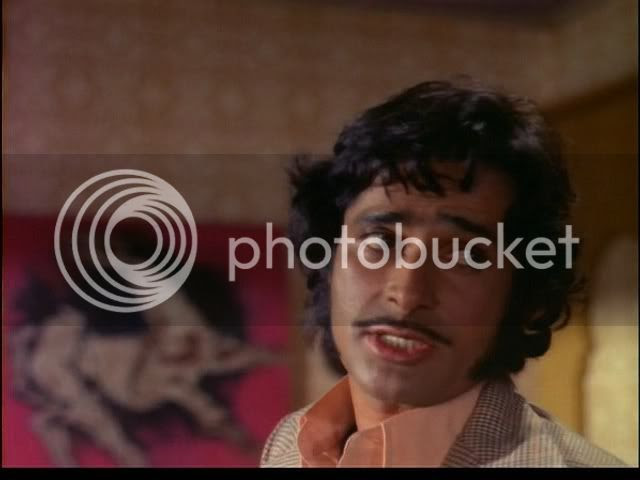 Shashi is kickin' it in this movie. And his look was clearly the inspiration for Wolverine. We loved it. 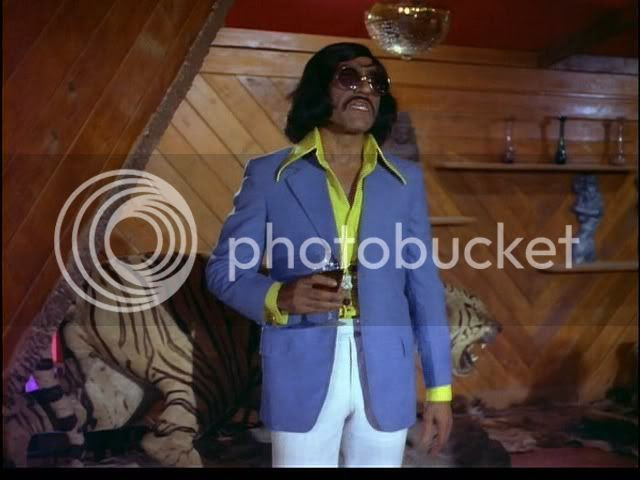 Yes, underneath that wig, behind those big moon glasses, there is Amrish Puri.

Not only that, but the movie smartly uses our favorite filmmaking tropes of the genre: one great song, one reprise of one great song, and one sweet scene which includes an adult reunion of childhood loved ones. All these actually combined to make one great scene, which inspired us to make the soothing blog banner you see above you. The scene is wonderful. In it, Chander (Shashi Kapoor) and Seema (Sulakshana Pandit) are visiting a local fair. Unbeknownst to them, they were childhood sweethearts, but now, as adults, they don't recognize each other. They've been bumping into each other and bonding anyway by the Great Law of Hindi Coincidences.

Standing before the merry-go-rounds and dancing monkeys (or possibly ant-eaters), Seema is reminded of a time long ago (in the prologue, for us viewers) when she and her childhood friend, Raju, used to save their pennies and go to the fair and sing songs together. This song - which is just gorgeous! and a little strange, given that the child actors played it like an adult item number - suddenly comes echoing back in a reprise. With loads of juicy, nostalgic reverb, Seema picks up the old verse: "Dreams of the future were in our eyes; our breaths were perfumed like flowers." Chander, who has gone to buy some peanuts, immediately recognizes the melody and turns to her, stunned. 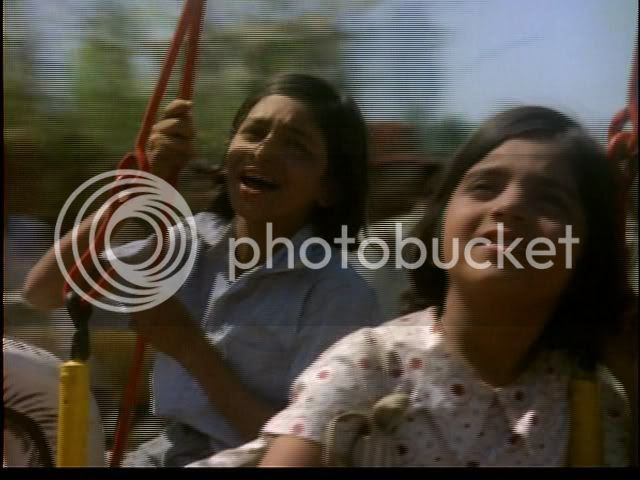 The kids' sweet and strangely adult song. Note that it's the same kid who played a young Amitabh in Suhaag. 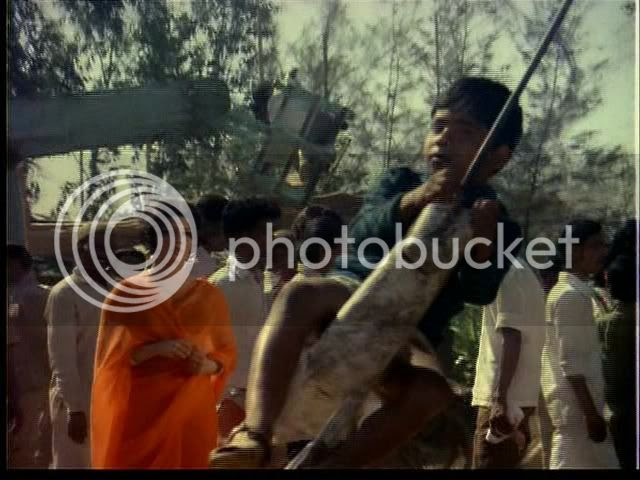 In the present, it slowly dawns on Seema. Note that she is still amidst a lot of whirling movement. 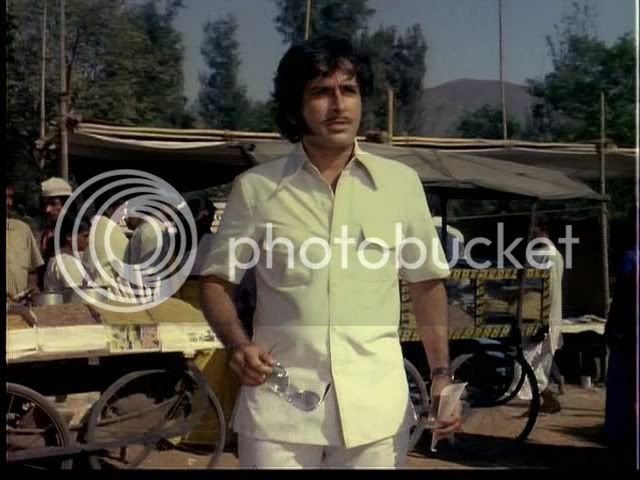 The Raju in Chander awakens. 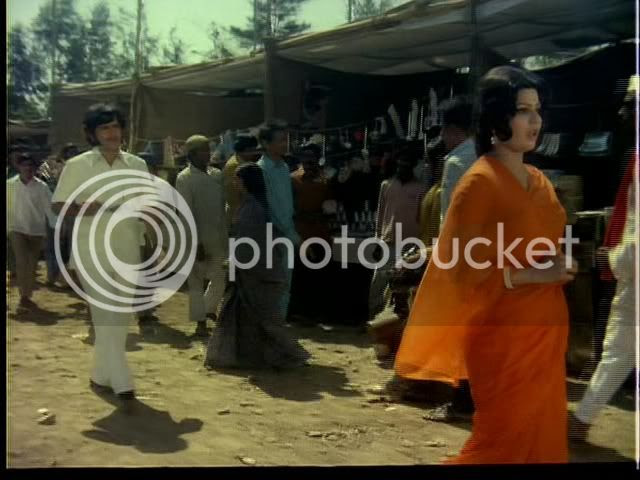 Eventually, Chander calls Seema by her childhood name, "Guddi!" Overwhelmed with joy (are you lovin' it?! the PPCC was EATING IT UP by this point), Seema realizes it is her long-lost Raju after all and exclaims, "Raju!" They embrace, with lots of intense cuddling and happy Guddi Guddi! Raju Raju!s. 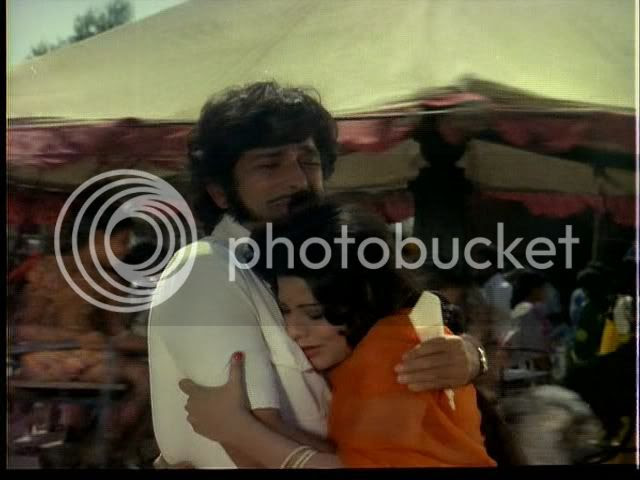 Their happy reunion is then swiftly broken up by some policemen who are hot on Chander's trail, and the action is back on. But this scene could easily be representative of Why The PPCC Loves Masala (a post coming soon to a PPCC blog near you): a goodly masala movie will take time to let the audience emotionally invest in its characters. Pauses in the action for some heart-string-pulling are not only allowed, but encouraged. Indeed, these prologues seem solely included to give directors an excuse to have one of these "You? YOU!" scenes of recognition, always so satisfying.

In fact, brief time-out for:

5. Fakira. Shashi and Danny Denzogpa realize they are brothers after the latter pulls the former out from the bottom of the sea (the former having survived underwater for 30 minutes due to yogic breathing). When Shashi comes round, Danny exclaims, "Bhai!" Shashi goes, "Bhai?" Asrani goes, "Yes, bhai. This is your bhai." Shashi goes, "My bhai? Really? My bhai?" Danny goes, "Yes, your bhai." The PPCC goes, "YES YOUR BHAI." And then Shashi goes "AJAY!" and there is much hugging and cuddling.
4. Suhaag. Shashi and Amitabh have already become best friends forever, and then, during the violent dennouement in that godown, that evil guy goes, "He's your bhai!" Shashi goes, "My bhai?" Amitabh goes, "My bhai?" The PPCC goes, "YES YOU ARE BHAI!" They have no time for cuddling, but they do save each other's lives.
3. Aa Gale Lag Jaa. Oooh, a gold one, this one. In the hospital room, Sharmila picks up the photo from the floor: it's her and Shashi! Which means, yes, the little boy in the headcast is your son! After cutting back and forth rapidly between Sharmila and her son, she goes, "Tiny Tim... my son?!" The boy's jaw drops (literally). The PPCC goes, "YES YOUR SON!" And there is much hugging and cuddling (and his paralyzed leg is also healed!).
2. Tashan. Another reason why this film is actually refried masala. When Kareena attempts to get Akshay drunk on the boat (for nefarious, exploitative reasons), and Akshay goes all mushy talking about his long-lost childhood sweetheart, Little Kareena. After the extended insert-a-prologue, the present-day Kareena tearfully exclaims, "I'm your Little Kareena!" Akshay goes, "What?" Kareena goes, "Your Kareena, that's me!" Akshay goes, "Really?" The PPCC goes, "YES! WELL, WE HOPE SO!" And there is much hugging and cuddling.
1. Awaara. Possibly the best childhood reunion EVER. Raj is at Nargis' house, he recognizes her childhood photo, he goes, "Who's this?" She goes, "Me." He goes, "(internal 'holy shit') Please come to my house, I'd like to show you something." She goes, "OK." Fast cut to the same photo, on his wall at home. She turns to him, she goes, "Raju?" He shrugs and smiles. She goes, "And I took you for a thief." He goes, "Not your fault. Lots of people think so. It's my face." JOY LIKE KNIVES.

Anyway, apart from piercing you with its cutlery-like bliss, Salaakhen has more fun stuff going for it. Shammi Kapoor shows up, quite randomly, as a jolly, red-cheeked Sikh stereotype. "Oh, Anarkali!" Mehmood has a somewhat meatier cameo as a Muslim stereotype and guardian of Shashi. You'd think his over-the-top caricature would be annoying, and yet there was something endearing about it. "Masha'Allah!" The dialogue was hilariously silly at times - such as when Abercrombie and Fitch capture Shashi and greet him with, "Hello, prince! Hello, bastard!" (Side note, but the following gas station explosion is hilarious as well.) And everyone - Shashi, Amrish, Sulakshana, and that poor guy who plays the hapless insurance agent (possibly Ramesh Deo?) - was in visible good-humor. They seemed to be enjoying themselves, and that transmitted onto the screen, so that a relatively workaday film became something quite fun and sweet. 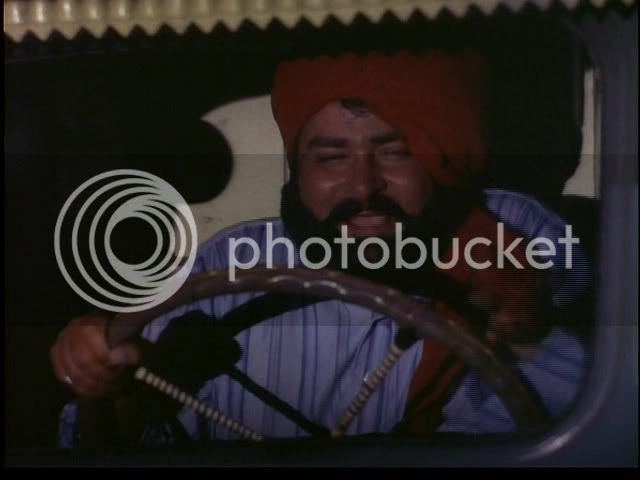 Bonus: Shemaroo subtitled the songs! Praise with great praise.
Posted by a ppcc representative at 21:00

This looks great! Do Shashi and Shammi actually act with each other? 'Cause that would be great. I had to consult imdb to see if they were in any other movies together (yes! 5! not including this one! because imdb does not know Shammi is in it!). You and Memsaab and Paint it Pink and I need to watch those together, and then the universe will collapse in on itself.

Would love to watch this w/all mentioned above by Beth, but I WILL sob. You've been warned!

Am in the middle of this and LOVING EVERY SWEET MINUTE.

I don't know that I would have found this without you. Thank you Peeps from the bottom of my black sticky dil of tar.

Have you seen Johnny Mera Naam? An unbelievable reunion scene in that between Pran and Dev Anand.

Awww, a joy like knives. So awesome. When, O P-PCC, will you review Tashan? Pretty please?