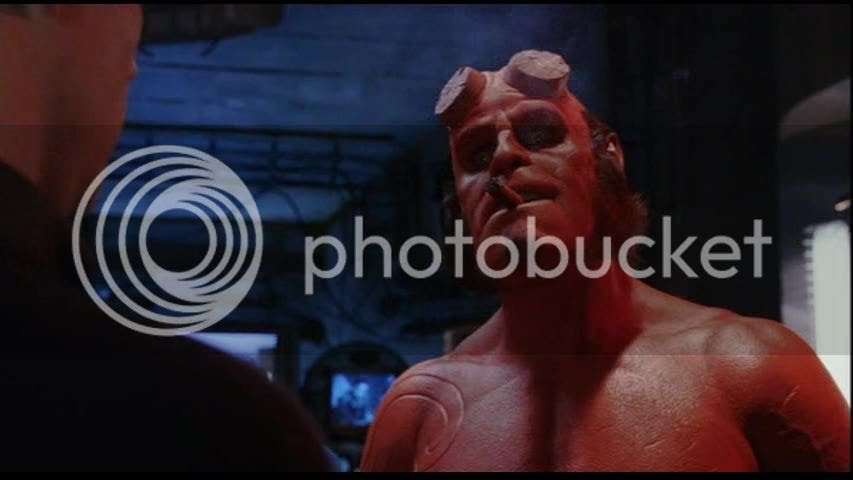 The PPCC was delighted to see that Hellboy has Toshiro Mifune's haircut! Yay!

Anyway, Hellboy. The PPCC was first introduced to Hellboy through the most unlikely of sources: the Abe & Kroenon webcomic.

We don't know how we found this webcomic. But for whatever reason, one day years ago we found this webcomic and became addicted. We knew nothing of Abe the fish guy, Kroenen the undead nazi, or, for that matter, Hellboy, so it was contextless. But it was so hilarious and weird, that we read it all anyway!

We were, hence, very curious about this whole Hellboy thing after seeing this, and we have now Hellboyfied ourselves this weekend. Our thoughts: definitely see the second film, in theatres now, as it's fun and twisted and visually stunning. Also, the fish guy is a stud. Our further thoughts: see below. 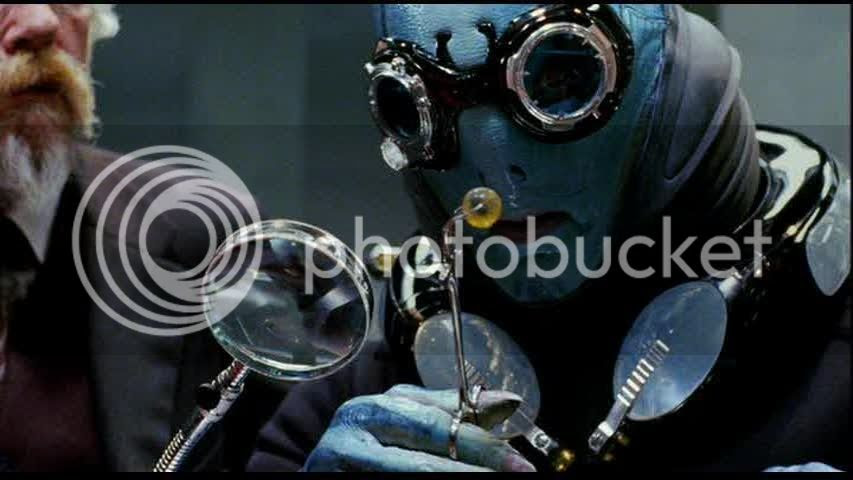 The first film, directed by Guillermo del Toro (Pan's Labyrinth guy), follows the exploits of graphic novel character, Hellboy. The quirky story is that, back during World War II, evil Nazis - led by undead zombie Nazi, Kroenen, and apparently also not-dead Rasputin (yes, of Russian monk fame) - open a portal to someplace which is half-demonic, half-science fiction. Their aim is to channel some dark energy to use in the war, but they are interrupted by the arrival of American troops. After a quick firefight, Professor Bruttenholm (Kevin Trainor first, John Hurt later) finds a little, red demon child with thick horns and a right hand made of stone. Totally cool! The prof dubs his adopted son "Hellboy".

Fast-forward to the present day. Hellboy (Ron Perlman, who we normally consider Tom Waits' doppelganger) is now working for the US Government in the Bureau of Paranormal something somesuch. His pals and colleagues include anxious boss Manning (Jeffrey Tambor), sensitive intellectual and half fish Abe Sapien (Doug Jones, voiced by David Hyde Pierce), nerdy resident Normal White Guy Myers (Rupert Evans), and the glamorously gloomy fire-starter Liz (Selma Blair). This motley crew work behind the scenes of Manhattan to keep the city clean of paranormal grime, and it all feels very Ghostbusters - with showdowns in museums, special paranormal weaponry, and buckets of plasmic goo. 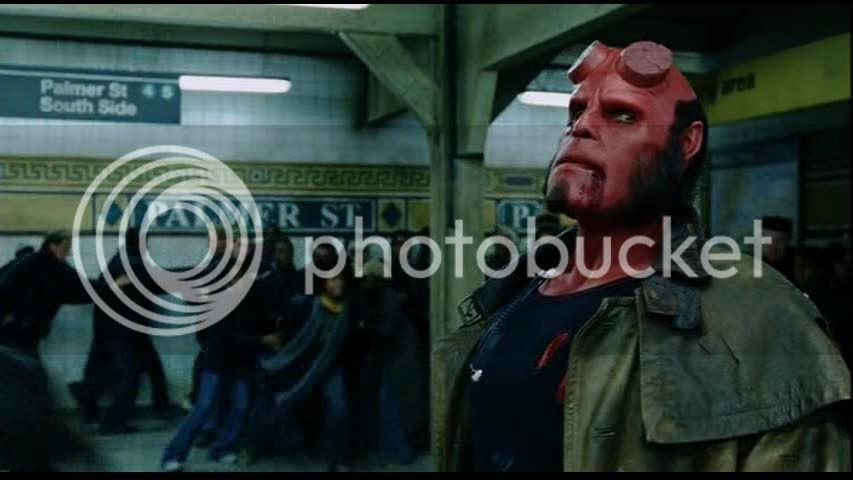 Like Ghostbusters, the clashing of supernatural zaniness in a gritty urban setting. Yay!

The fun of Hellboy is its self-aware offbeat vibe. Even though there are intimations of Hellboy's hellish origins and hellish fate (apparently he'll destroy the world, blah blah), Hellboy himself is just a regular old guy: he drinks Budweiser while watching TV, he has a thing for Baby Ruth bars and cats. He is also unapologetically soft and squishy on the inside, despite his hard, red exterior shell. For example, he is hardcore crushing on Liz, and in one scene, he writes her reams and reams of poetry. "Hey Myers, you're a talker. What's a good word, a solid word for 'need'?" he asks.

At times, this soft-and-squishiness can ruin the fun - we found ourselves squirming with boredom during Hellboy and Liz's protracted "moments of romance", partly because they felt so forced and so boringly conventional. (Indeed, Hellboy 2 has much more fun (and heart!) exploring Abe the Fish Guy's growing crush on the eerie elf woman.) Much more fun were the varied, unexpected ways in which the story could morph and twist Western culture and mythos (zombies, Nazis, saints' relics, etc.). 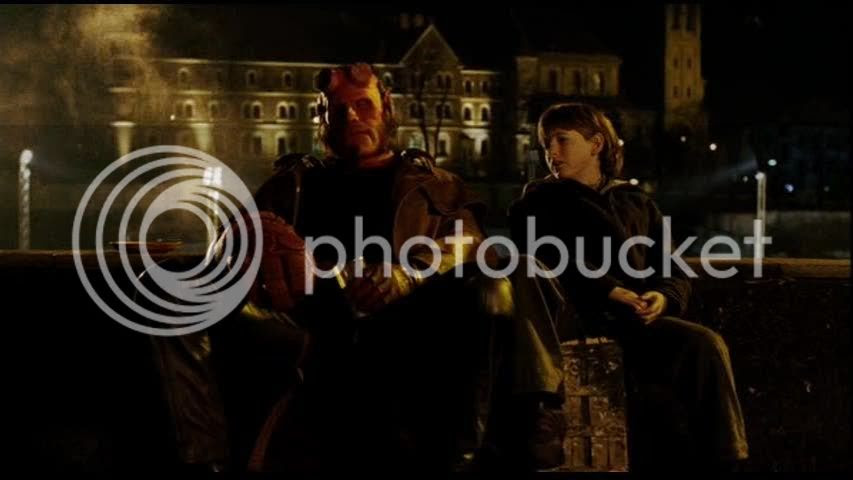 This scene, where Hellboy gets love advice from a 9-year-old fan, is very cute.

Even though this was directed by Guillermo del Toro, whose talent for creating monsters was very evident in Pan's Labyrinth and the second Hellboy, this didn't feel very Guillermo-ish. It was very tame by comparison and the few monsters we do see - Kroenen without his mask, that gross sea monster thing - were very conventional. (The sea monster, in particular, was exactly like the Korean sea monster from The Host.) If you're keen on seeing interesting and gross monsters, skip this and proceed to the second Hellboy film. 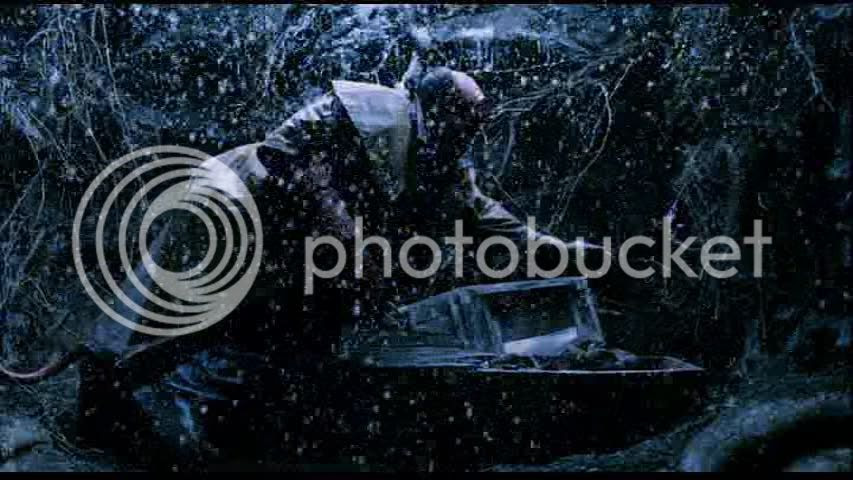 Hellboy at the Golden Ratio with a diagonal of his arm. Yay Guillermo!

Overall, this film felt quite mainstream when compared to the second film. Perhaps now that del Toro's aesthetic has been approved so dramatically after Pan's Labyrinth, and the Hellboy franchise is well-established, del Toro was confident enough to flood his screen in Hellboy 2 with all manner of craziness. The first Hellboy, on the other hand, is mostly rendered interesting by the concept of its title character. In retrospect (we saw Hellboy 2 first), the special effects looked rough and amateurish, and Ron Perlman still seemed to be deciding on how to play Hellboy. There was also an overreliance on the relatively uninteresting human characters - Myers, for example - probably because del Toro was unsure of how much Hellboy weirdness a virgin audience could handle. Hellboy 2's focus is instead solely on Hellboy, Abe and the other non-humans, and this - along with its sleek production value, visionary goulishness, and humorous self-confidence - makes it a better film overall.

That's not to say the original Hellboy isn't good. It is, but it's just not as envelope-pushing as its weird and wonderful concept implies. Nonetheless for completism and for curiosity, it's worth a viewing.

Posted by a ppcc representative at 00:07

I am giddily in love with hellboy! For some strange reason, I noticed that in Hellboy 2 Ron Perlman was built small than he was in Hellboy1... I think Del Toro did that to make him look more humance, which #2 required.

Saw this one a few months ago courtesy a visiting friend and thought it the weirdest movie I've ever seen. Now you say the new one is even weirder! OMG - hope I dont have to see this one!!! ;-)

Shweta - Yeah, after seeing the second one first, I noticed that the first Hellbow was a bit clunkier and rougher in terms of aesthetic. Abe's look was also relatively unrefined, I thought.

Bollyviewer - But weird is good! The second one's so much more fun, too. I highly rec it!

This film didn't overcome my expectations, but I should say it was not bad at all, however my critique is because the effects could be better.