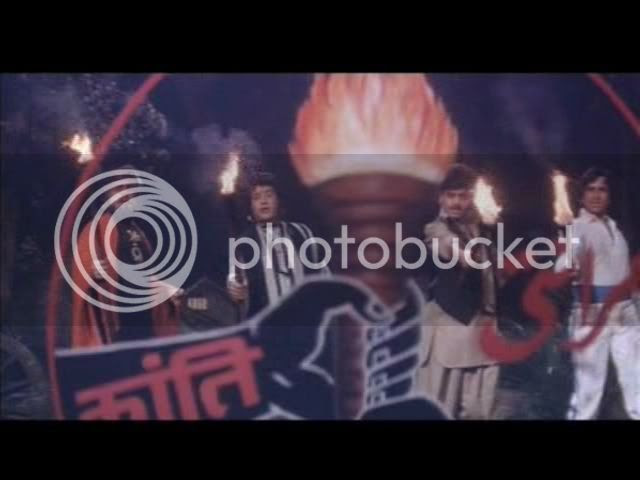 From left to right: Dilip, Manoj, Shatrughan and Shashi, all wielding the flame of revolution during the titular dance number.

We'll just get to the point. Kranti (Revolution) is bad. It's only a few notches above Mard, a similarly exaggerated fable of British Raj India. These films take place out of time, in a land where the British are all-powerful and all-evil, and Indians are perpetually victimized and ennobled by their suffering. Like Dhan Dhana Dhan Goal, Anglo-Indian race relations are painted with all the subtlety of a toddler's handpainting.

We at the PPCC are annoyed by these films because, apart from their racism, they also seem to dishonor the memory of the real Indian independence movement. Why invent all these ridiculous stories when the real one is more moving, more inspiring, and, best of all, true? What's the point of making inflammatory statements (Kranti's knock-out being the story of the evil British soldiers who denied a widow the right to burn herself on her husband's pyre only to then gang-rape her)? Don't you trust the real history of oppression, with all its complexity, to be more emotionally affecting than this beefed up grotesquery? Eh, Manoj?!

And who the hell is the target audience?

It certainly isn't the PPCC. And while we were happy to give Kranti more than a sporting chance - all-star cast! Manoj Kumar directs, writes, stars! epical! our beloved Shashi! - it quickly squandered that chance. 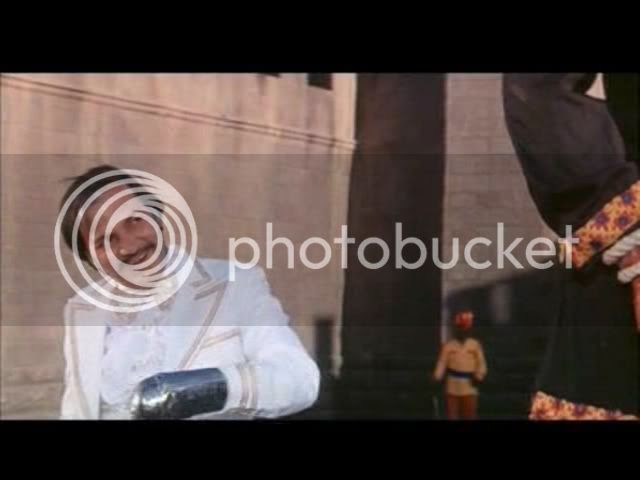 That's not to say it's all bad. It has some nice pro-girl moments; Parveen Babi and Hema Malini star as two kick-ass revolutionaries integrated into the boy's club of violence. The romance between Shashi Kapoor and Parveen Babi's characters is, while brief and mostly insinuated, also cute. Manoj and Shatrughan chew up the scenery in a most satisfying manner while Dilip Kumar seems to sail alone on the good ship Subtlety.

But even those rare lights of OKness are dimmed by the tired, unearned drama and endless vilifying. There are also - as in Mard - some bizarre and misused moments of eroticization. Whips, chains, oppression, racism - who gets kinky at a time like this?! Also, everyone - and we mean everyone - in this film kisses their weapons before using them, which becomes something of an unintended running joke/drinking game.

The plot structure is similar to several other films of the era, and indeed, most of the same people are involved. Sanga (Dilip Kumar) and Radha (Nirupa Roy) are two humble, God-lovin' folk trying to get by in 19th century India. After he inadvertently gets caught between the evil collaborator Indians (led by Prem Chopra, as usual) and their evil British overlords, Sanga finds himself on the wrong side of the law. After some twists and turns, Sanga, Radha, and their two infant sons are all separated, each believing themselves to be the only survivor in the family.

Not enough stars for you?! Well then have some more! Spoiled Anglicized Princess Meenakshi (Hema Malini) is abducted by Young Kranti's gang, and she butts heads with salt o' the earth bombshell Sureli (an excellent Parveen Babi). Think you know which heroine ends up with which hero? Not so! The tables turn when Sureli is sent off to the palace, impersonating Princess Meenakshi by (she's instructed) acting rudely to everyone. There follows a too-brief and funny sequence where Sureli goes wild in the palace, getting drunk at a party and (yet again) wooing Shashi at the same time. 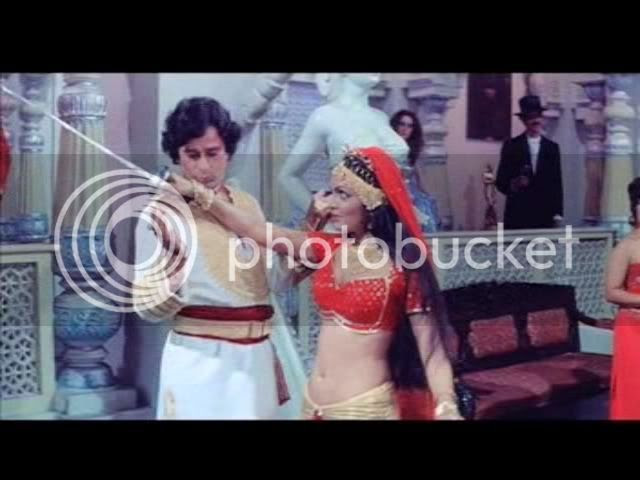 At one point, she gets him to kiss her weapon, that cheeky tart.

And let's not forget our Muslim freedom fighter and walking pep talk, Karim Khan (a bad-ass Shatrughan Sinha, as usual), who appears every so often to weild his bad-assery and give everyone a morale boost. OK, we admit it. Every time Shatrughan appeared onscreen, we were PUMPED. YEAH. YEEEAH! LET'S KICK SOME ASS! RAAAH!

Amidst all this, there is the occasionally touching romance between Manoj and Hema (who knew!), numerous scenes of imprisonment, a long and weird sequence on a galley ("Row, ya bastards!" - Eddie Izzard), numerous tales of the Britisher's debauched, purified EVIL embodied in nice guy Tom Altern, and the inevitable reunion of four severely misplaced family members.

The performances are all fun, but that's because all the stars - Manoj, Hema, Dilip, Nirupa, Shashi, Parveen, Shatrughan, Prem, even Tom Altern - are such likable and familiar faces. Indeed, our love for these people is the only reason we watched this silly film until the end.

Special note must be made of Dilip Kumar, who, unlike his fellow Krantites, refused to give into the outrageousness. While Shatrughan and Manoj achieved new heights of uber-drama ("Bastarrrrrd!"), while Shashi bawled with abandon in his Ma's arms (out-emoting even brother Raj, king of emo), Dilip put in a stubbornly authentic, softspoken, heartfelt performance. More than once, we wondered, "What is he doing in this movie!? He must think he's in Gandhi." 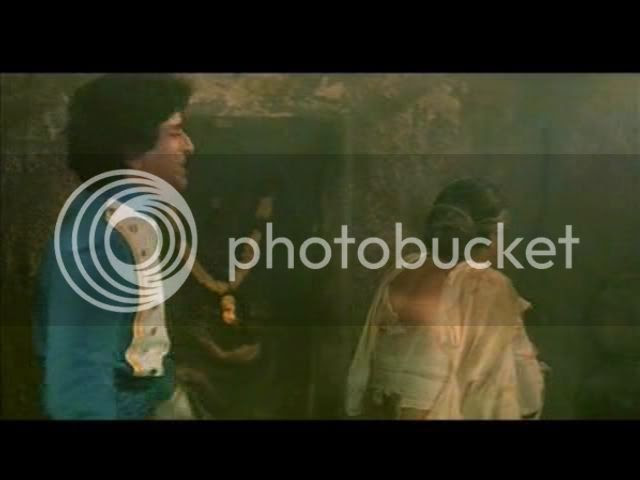 It was hard to catch Shashi's bawling, as he moves around a lot, but compare it to older brother Raj's tantrums in Anari. 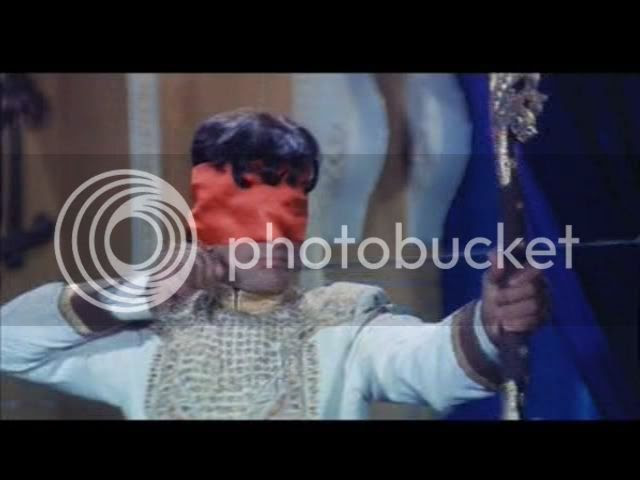 Actually, poor Shashi goes through the meatgrinder in this film. Here he's been forced to shoot the eye of a rotating mechanical fish, blindfolded, while his foster mother stands right behind the fish eye. Don't miss, my son! 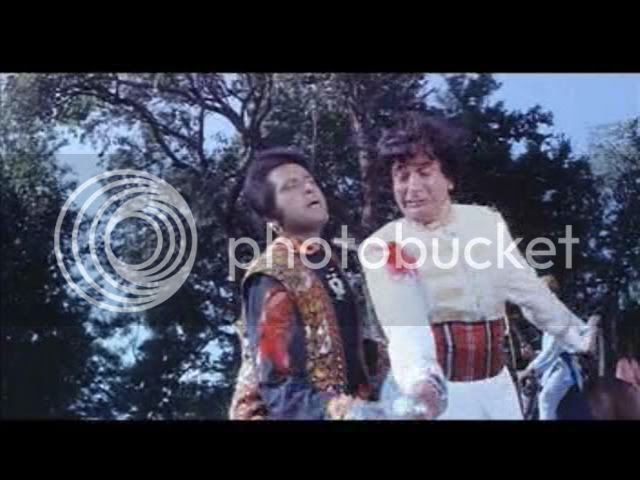 Here, he gets his ass kicked by older brother Manoj. As if that wasn't humiliating enough, some of Manoj's cronies then run him over using his own carriage. Fear not, Shashi Kapoor/Ben Hur fans, he emerges unscathed (well, excepting his pride). Heh! It takes more than some cloven hooves and a three-hundred pound carriage to knock off our big hero.

Another special note must be made of the Manoj-Shatrughan jodi. You know, some pairs just have it. That certain special something. That hint of magic. Much is made of Amitabh and Shashi (and, after seeing this, we would say Shashi and Whoever's Playing His Mom), but we must say Manoj and Shatrughan have something oddly and equally magnetic about them. At least, there's this silly sequence when they're both imprisoned in the galley of a random British boat together. After a single cut, they've both grown matching beards and it all turns a bit Monty Python. When Shatrughan starts despairing to the point of histrionic meltdown, and Manoj grabs him in a bear hug from behind, beckoning him to, "Take it easy, man!" - well, gosh, the PPCC was touched. These two are lovely together. They play off each other so well, feeding each other's melodrama: Manoj's hurt moans of "NAHIN!" coupled with Shatrughan's enraged roars of "NAHIN!" Have they made any more films together? Please say yes, internet! 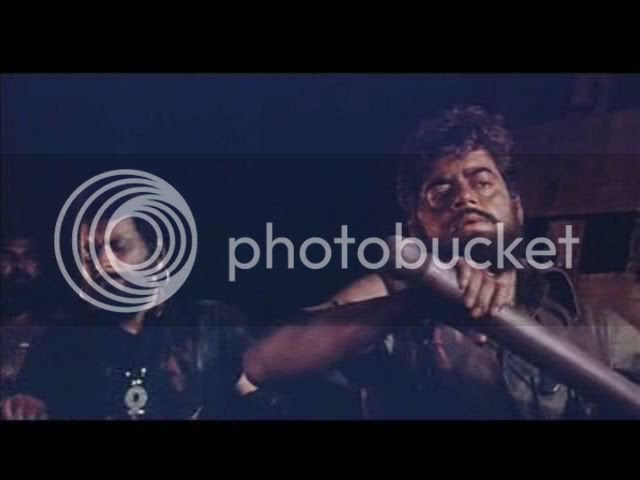 These two were an unexpected, happy surprise of this film. If the PPCC could make films on demand, we would demand that they make a special subfilm of Kranti called: Manoj and Shatrughan, The Galley Days.

But alas. An unexpected jodi can't save the rest of this film. This film came in at the low tide of ideas (and other things). Manoj's legendary patriotism - which we approved of in Roti Kapada aur Makaan - was misspent and tiresome. So were Dilip's naturalist acting, Shashi's maudlin tears, and Parveen's zaniness.

The songs were also pretty disappointing for Laxmikant-Pyarelal, though thankfully some of the picturizations were flamboyant enough to be entertaining. Manoj and Hema's kinky love duet on the boat, where he is strapped to the mast (a la Odysseus!) and she (a la Siren!) writhes around on the deck in front of him is... pretty shocking. We at the PPCC also really enjoyed Shatrughan and Hema's disguise song which they use to rescue Manoj (chained up, yet again) - Shatrughan, doomed and blessed to play the bad-ass that gets killed off in the end of every movie, is a lot of fun doing comedy.

This film's basic problem is that the emotional kicks - which are a masala film's life-source - don't work. We don't buy the faux historical context, and we're not particularly sold on the family drama either. Roti Kapada aur Makaan is an example where Manoj Kumar got his formula really right: a broad socially-minded context involving the Plight of Mother India, and, cast against that, a moving story of human relationships. Kranti, on the other hand, is an example where the formula went horribly, terribly wrong. 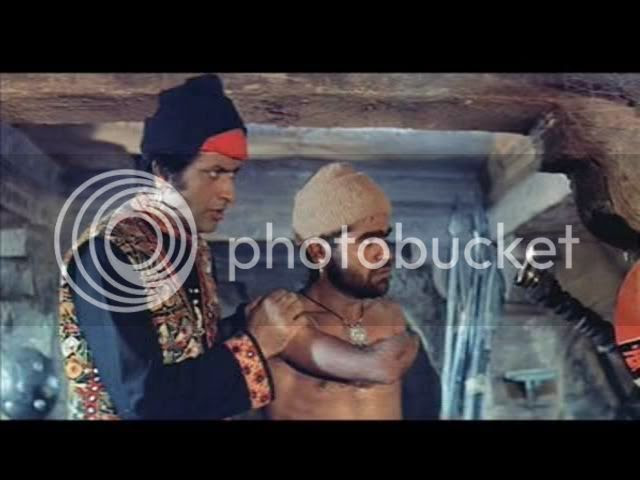 First: is Manoj wearing a ski cap? Let me tell ya, it was very distracting.
Second: the film went out of its way to empower this disabled guy with no arms. Manoj introduces him (in the above scene) as Yet Another Victim of British brutality (the British cut off his arms... just because he was Indian!), but then the guy ends up becoming an integral supporting character who saves our heroes from imminent death on more than one occasion. Indeed, we see this guy achieving amazing feats - climbing aboard the ship with a knife between his teeth, stealing guns and shooting British minions, rescuing Manoj and Hema, dancing in the big show-stopping numbers. It was like... YEAH, GUY, YEAH!
Posted by a ppcc representative at 22:32

Kranti may be a bad film but this is an excellent review! Thanks

Welcome back to internet land, peeps, and I agree with Eliza wholeheartedly. Better review than the film could ever be! You *almost* tempt me to watch it again! (nahiiiiiiiiiiiinnnnn)

yaaaaaaaaaaayyy! kranti i think is a god-awful mess but i forget that every time because Manoj is sooo broody and patrioticly hating the english that he once defended in "Purab aur Pacchim" I whollly agree with the Shatroj jodi its so sweet but why did he have to die, i always feel sad when Manoj feels the need to kill someone off, to show off the greatness of his kranti! The faceoff of between Dilip and Manoj was scene chewery at his titan best. yaay for my manoj!

Hullo PPCC! This movie sounds like a celluloid trainwreck, but I sense a veracious-style drinking game involving "everytime someone kisses a weapon, take one" could make it bearable.

Hmm... a total train-wreck. Its been a while since I saw anything that was soooooo bad. Besides I like some of its songs - Chana jor garam was a childhood favorite (our Antaaksharis were never complete without it!) and the Parveen-Babi-drunk song looked interesting on youtube. Like memsaab I am almost tempted! :-)

Miss Bennet - Thanks! Oh, it is a baaad film.

Memsaab - Thanks, Memsaab! And NO, NO, don't be tempted. Or, if you are, just watch a couple scenes on YouTube to remind yourself how bad it was.

Rum - Aww, your dedication to Manoj, even in times of strife, is sweet! (Reminds me of my love of Shashi, who can Do No Wrong... even we he clearly does wrong.) "Titan best" - what a perfect phrase!

Ajnabi - Thanks! Depending on what you were drinking, you wouldn't last very long if you sipped everytime they kissed.

Bollyviewer - Nahiiin, don't be tempted! Actually, some of the scenes are on YouTube there, so you can do a test run. I would say the only non-song scene worth watching is the one where Shashi confronts Nirupa about being his mother and just cries and cries and cries. That part was good.

This sounds awful - no matter how much I love Shashi as an Anglicized Indian prince (shut up, Said!) - and I really truly hate fake-pretend historical contexts, especially when they are used for no good reason at all.

But were you just a drool pile because of the line-up? If not, how did you avoid becoming one? It seems almost custom-made for you, minus the "whither Pran" factor!