My cup of angst overfloweth.

Meet Dilip Kumar. He's the new kid on the blog. Let's be nice to him.

In a single week, we've gone from zero to three on the Dilip Kumar film watching scale (Kranti, Mughal-e-Azam, this). And we are lovin' it! 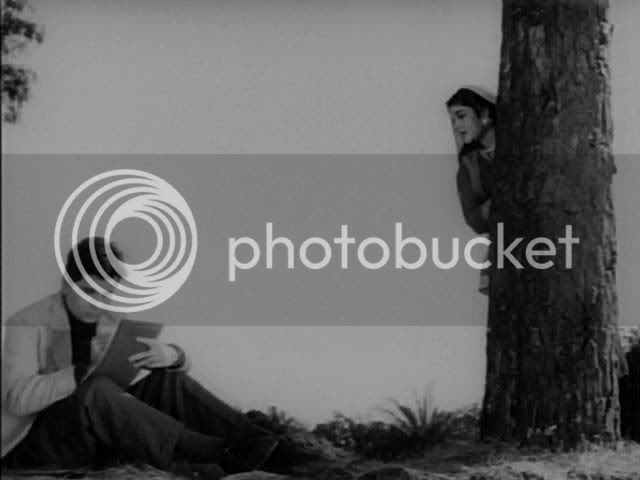 Madhumati is one of those juicy, angsty tales of emo drama, food for the PPCC soul. But don't be alarmed, emo-haters! Like a younger, immature brother of Teesri Kasam, the vibe of Madhumati is sweet and serene and pastoral. We promise that it is - excepting Johnny Walker's scenes - restrained and lovely. Also, hey, pedigree - it's directed by Bimal Roy!

Madhumati begins on a dark and stormy night in 1958. Bossy married man Deven (Dilip Kumar) is annoyed when his driver can't push huge boulders from the side of the road, and he and a pal retreat to an abandoned mansion to wait it out. There, while warming themselves over the fire and listening to creaky floorboards, Deven begins experiencing the typical Flashbacks of the Reincarnated. When a portrait of Pran (yes, our beloved Pran!) falls off the wall, it all comes flooding back:

Long ago (though still sometime in the 1950s, judging by the costumes), young Anand (Dilip Kumar) was sent to manage the accounts of a timber estate deep in Himachal Pradesh (perhaps? or perhaps it was Shashi Pradesh). There, he met the zany, alcoholic butler, Charandas (Johnny Walker), and the evil boss, Raja Ugra Narayan (PRAN!!!). Now, conflict just slid off Anand like water off a duck's back, so things were going well. Anand even met a beautiful forest nymph, Madhumati (Vyjayanthimala), and began a Bambi-esque courtship full of drawing sketches, skipping over stones, and gently cuffing each other on the nose. Tho cute! Of course, someone with a name like Ugra's not gonna let that fly, and one fateful evening, Ugra lures Madhumati to his mansion while sending Anand off on some invented excuse. Anand returns to find Madhumati gone, with tales of horror surrounding her disappearance. After confronting Ugra-Pran the Immoral, goons break all of Anand's bones and leave him to mope in a forest cottage. 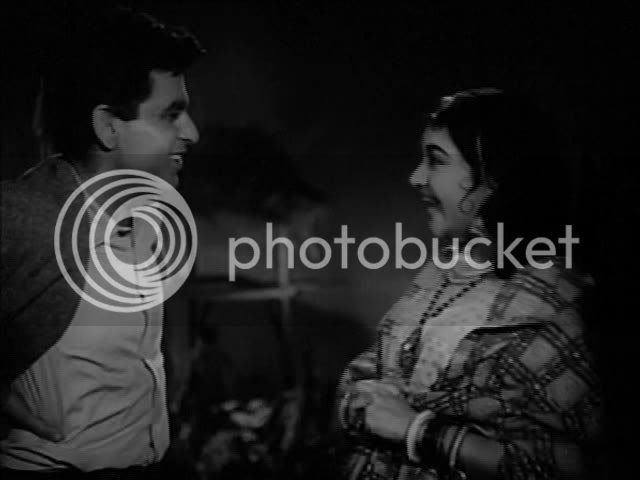 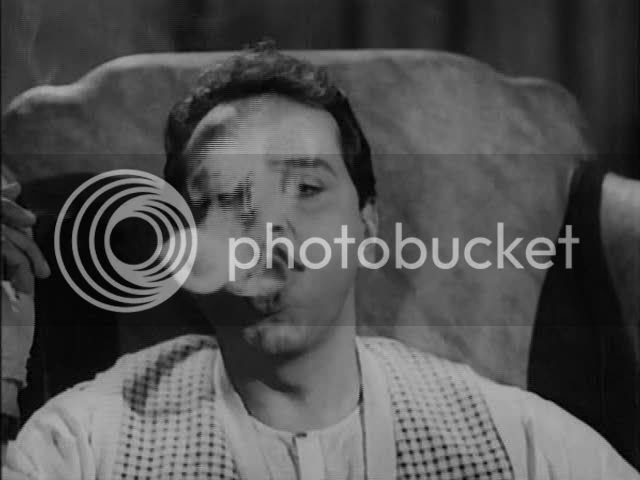 Pran's the stud himself, blowing smoke rings. Is it hot in here or is it just us? 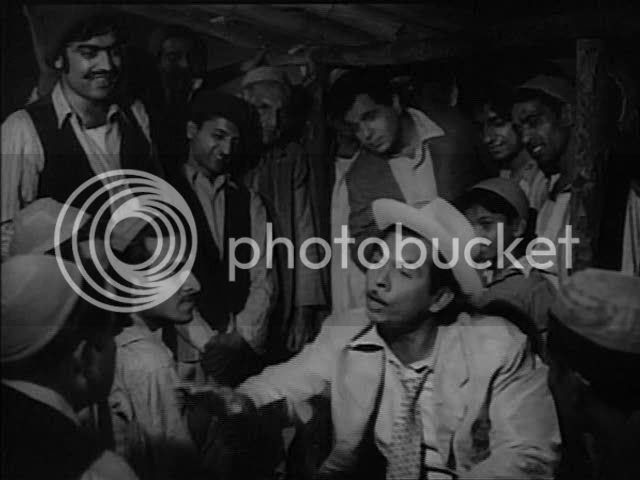 Things get even more gloriously tortured when an identical urban nymph, Madhavi (Vyjayanthimala, again), happens upon a brooding Anand as he sketches in the forest. Like the PPCC, Madhavi is instantly charmed by the hurt, puppy dog look in Anand's eyes, and much torturous heart-string-pulling of the Om Shanti Om variety ensues. Oh, glorious!

This is our second Bimal Roy film, after hearing much of Bimal Roy's genius. The first was Prem Patra, which provoked a combined yawn and shrug - a yug. Read Bollyviewer's and Beth's reviews - both kinder. In Madhumati, instead, we witnessed the flowering (forgive the forest puns) of Bimal's legendary talent. The film's pace is luxurious and slow - sometimes it drags - but each scene is infused with atmosphere. Bimal expertly uses the environment as a sort of Greek chorus: birds chirp, insects buzz, the river thunders. He creates a living, breathing world, and uses that naturalist setting to add punctuation and comment to the plot. 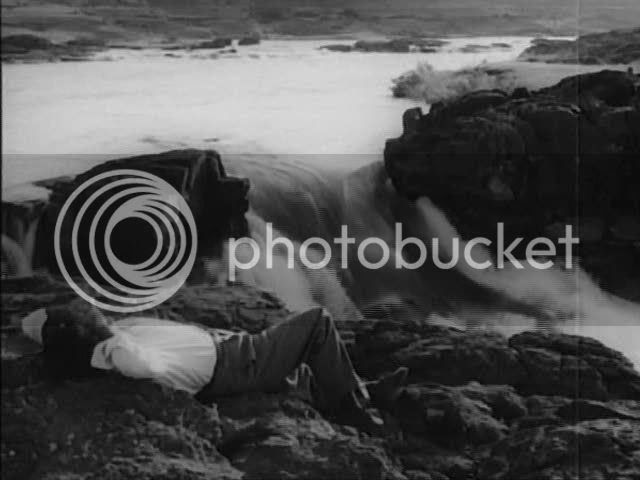 For example, when the villainous Ugra gallops through the forest, his arrivals are heralded by shrieking birds and flocks fleeing into the sky. In one scene, his surprise appearance is punctuated by a high-pitched squawk. In another scene, when Anand is thrown out of Madhu's cottage, we suddenly hear dogs barking in the distance. The delirious courtship, when the impish Madhu teases Anand and frollicks away, is sometimes literally suffused with rolling fog. As a result, and due also to the reincarnation theme, the film has a mysterious, fantasy-esque air. We wouldn't be surprised to find a troll in that forest.

Interestingly, this wonderfully moody setting is without the stark geometry and sharp diagonals of early Raj Kapoor. Instead, Bimal's aesthetics are rounded at the edges, misty and indistinct, much like a Turner painting.

Another nice touch which won us over immediately was Dilip's nervous hands. We don't know if this was specific to the role or if this was a Trademark Move, but Dilip Kumar matched the setting by infusing Anand with natural-seeming physical tics and mannerisms. He was constantly scratching his nose, picking at his scarf, touching his hair, shifting his weight. At times, these felt like affectations - a sort of forced realism which reminded us of modern dramatic American acting which, to us, always seems to say, "Behold, I am acting in a subtle manner!" Overall, though, it was good, and Dilip's style is so refreshingly subdued, it was a great change of scenery for a PPCC highly saturated on Kapoor histrionics and the Amitabh Bachchan sweaty face.

The main criticism we have of the film is that the pacing is trying at times, and there are certainly more efficient ways to tell simple stories about nostalgic forest love affairs (may we suggest one?). We wonder with delight what this plot would have been like in the hands of Nanni Moretti - who's La stanza del figlio matches this in moodiness, but exceeds in efficiency. Another problem was the number of songs. Song after song after song - it never let up! Even if they were sweet, it was still, like, whoa, mine ears.

And finally, sadly, we report an underwritten and superficial heroine. Some aspects of Madhu's characterization were awfully cute, and the film earned some points for having a courtship which is initiated by Madhu. However, sometimes the whole cutesie-coy act was tiresome, and Urga the Evil's rapist plot was a bit old school in its villainy. Kudos to Vyjayanthimala for showing us that she can act by presenting a sharply differentiated Madhavi. Indeed, her transformation from bubbly and brainless to world-weary and elegant reminded us of Kajol's fab ability to do that in films like Baazigar and Kuch Kuch Hota Hai.

But it was really Bimal Roy's sylvan chorus and Dilip's moody fidgeting which dazzled us. And now we want MORE, MORE.

Posted by a ppcc representative at 12:22

this was sooo lush and foresty, and i think dilip always seem to have those mannerisms since forever, but in ram aur shyam it went into overdrive, pran was so brilliantly studly and evil!

This is my first childhood memory of Pran and I never gave up hating him till I achieved a more mature outlook on actors! lol.

And OMG have to look out for A Month in The Country even though it "doesnt travel well" to North America!

First: Hi, wellcome back in the land of internet access (I did read the Kranti post but words failed me).

This was one of my early forays into Black and white movies and I loved it. It is so atmospheric.
As for the pace and the many, many songs, I got the impression after watching more movies of this era that it is quite common to have a two hour long movie with ten or more fairly short songs. I kind of like that.

Rum - Ooh, Dilip in overdrive sounds lovely. Must get Ram Aur Shyam. And PRAAAAN!!! My logical faculties just shut down when I think about/witness/write about PRAAAAAAN.

BV - A Month in the Country is DIVINE. It is one of the most sublime piece of aesthetics I've ever seen. I know, I'm building it up. But it really is just gorgeous and transcendental. The book that it's based on, by J.L. Carr, is very slim (less than 100 pages) and so packed full of atmosphere that you just want to cry and cry like Dilip Kumar. HIGHLY recommended.

And how can you hate Pran!?! I cannot fathom anything less than insane devotion towards him.

Gebruss - Thanks! It's good to be back.

Perhaps you're right. I've seen about a handful of B&W Hindi films - and all of them were Raj Kapoor/Nargis - so I don't know how representative they were. I was just shocked when this movie pulled a Silsila by having one song immediately follow another song!

I think I liked this more than you did maybe (you can read my review at my blog)...I watched it on a cold rainy day and it was just right for my mood.

I love the songs, "Suhana Safar" is an all-time favorite of mine.

this men was a great actor, in that era and in this kind of movie style this was the best, was always funny and serious at the same time.