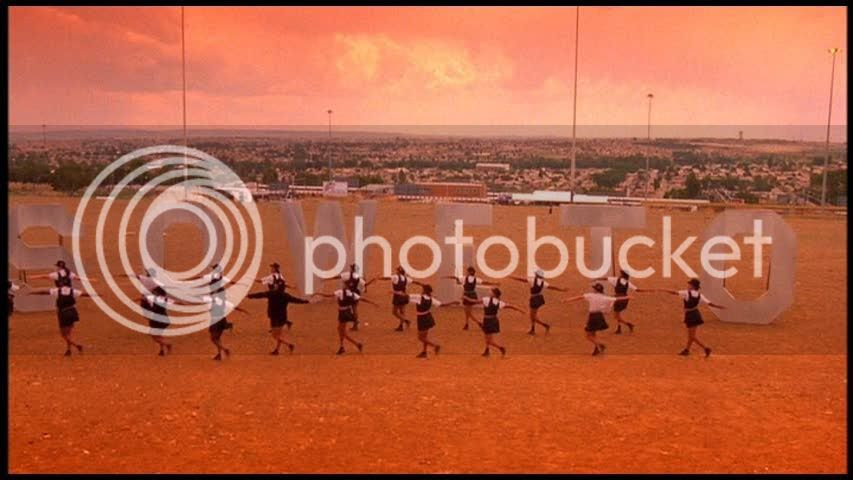 On paper, Sarafina! is a film of jarring contradictions: on one hand, it's a bubblegum high school musical about a young girl's dreams of being a star, and, on the other hand, it's a powerful depiction of that girl's suffering during the Soweto riots. Originally a stage show, the film version was released in 1992 - two years after the release of Nelson Mandela - yet its story is set in a time of uncertainty, when the young protagonists only dream of Mandela's freedom, and the adults pray to God that they'll be alive to see that day.

All this renders the film very moving. While the original New York Times review of the film claims that the final frame, which announces that Nelson Mandela was released in 1990, "dates" the film, we think - from a 2008 perspective - that this is far from true. Rather, it ensures the film's longevity, as younger generations, unfamiliar with the history of Apartheid in South Africa, might be genuinely unaware of when and why and how Mandela was released. After watching this film, it is a comfort to know that the "day" that the characters so fervently dream of does eventually come - the day Apartheid ends and Nelson Mandela is free. 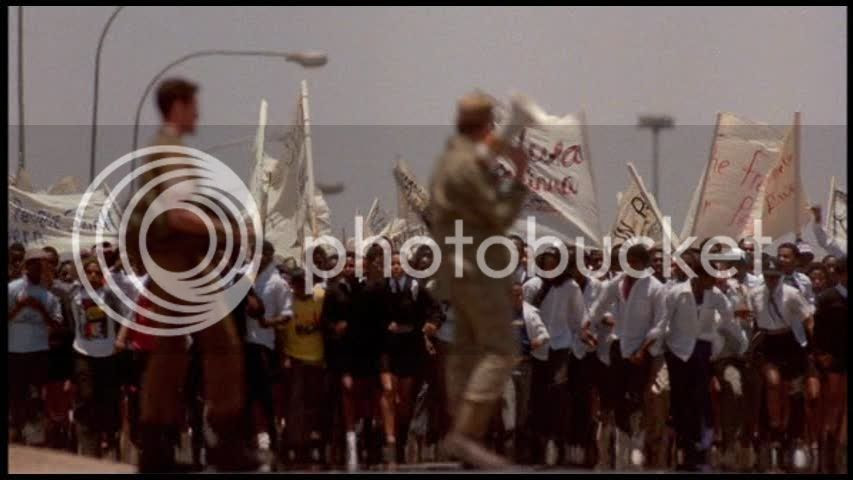 A great shot; one of the student protests.

The plot centers around the titular Sarafina (Leleti Khumalo), who is introduced to us as being a fairly typical teenage girl trapped in the atypical environment of the Soweto slums under Apartheid. Often addressing Nelson Mandela directly in her voiceover narration, Sarafina dreams of making it big one day. "When you're famous," she tells herself in the mirror, smiling like a celebrity, "you don't have to do anything. Stars don't do, they just be!" But real life keeps shoving in. Sarafina's high school was recently firebombed by local youngsters - and she suspects it was some of her friends who are students at the school. Tensions are high overall, and, when Sarafina's rebellious teacher, Mary (Whoopi Goldberg), is thrown in prison, the seemingly inevitable explosion of violence occurs.

All this is punctuated by musical interludes. However, what begins as an Afropop musical quickly morphs into a series of protest songs. The clash between carefree pop fun and the grim and passionate protest songs remains stark, but we think the contrast works in favor of the movie's overall message. 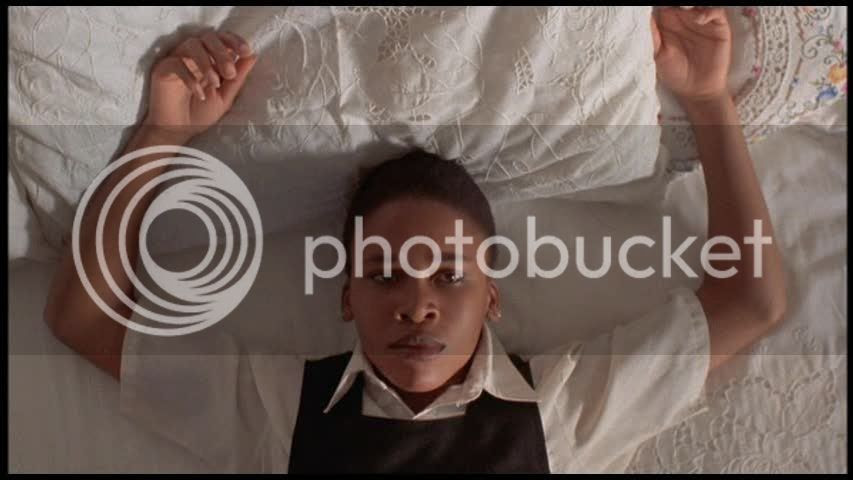 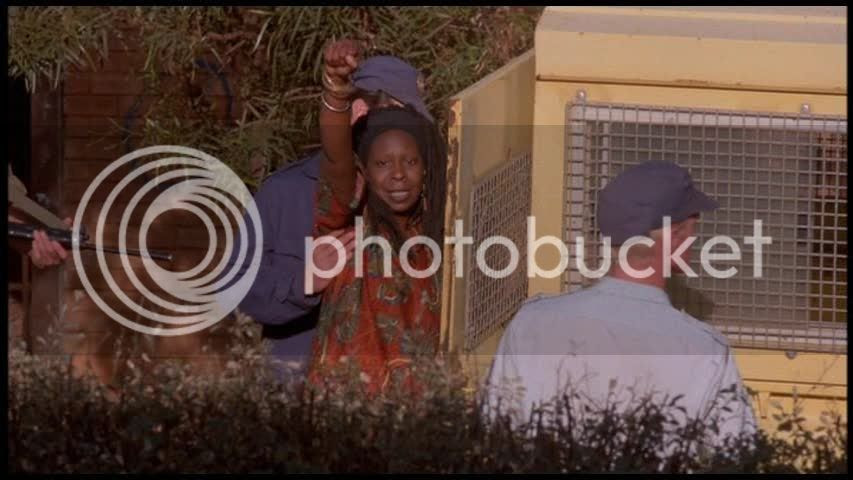 Whoopi was making some pretty cool films back in the day. The Color Purple?

Indeed, it's a clever idea. In a film which features the violation of children's human rights, it makes sense to show it as a superficially cliché high school musical (e.g. Grease, High School Musical) trying to break free of its miserable context. We want Sarafina to be a star, or at least to enjoy a light-hearted afternoon without having to worry about her love interest, Crocodile (Dumisani Dlamini), getting beaten up by the cops. We want her to have a cute heart-to-heart about boy troubles with her mother (Miriam Makeba), without having to feel infuriated and humiliated that her mother works as a domestic servant for an upper-crust white family. The movie shows constantly how harsh reality keeps intruding on Sarafina's youth, thus emphasizing the violation of children's rights. That is, if this had been a faux fun Afropop musical of adults set against the backdrop of the Soweto riots, that would have been jarring and perhaps even insensitive. Instead, because it's a film about teenagers, it makes sense.

Leleti Khumalo puts in a wonderful performance as Sarafina. She drives the emotional punch of the film, and easily gravitates believably from young and carefree to overly burdened. She also wonderfully captures Sarafina's teenage narcissism, making her endearingly and realistically vain. Whoopi Goldberg, who we suspect was partly brought in to add marketing value to the movie for American audiences, presents a brief, dignified performance as the doomed teacher. She struggles with the South African accent, but it's a difficult accent to mimic. Sipho Kunene, who played Sarafina's friend, Guitar, stood out for us as being very effective. 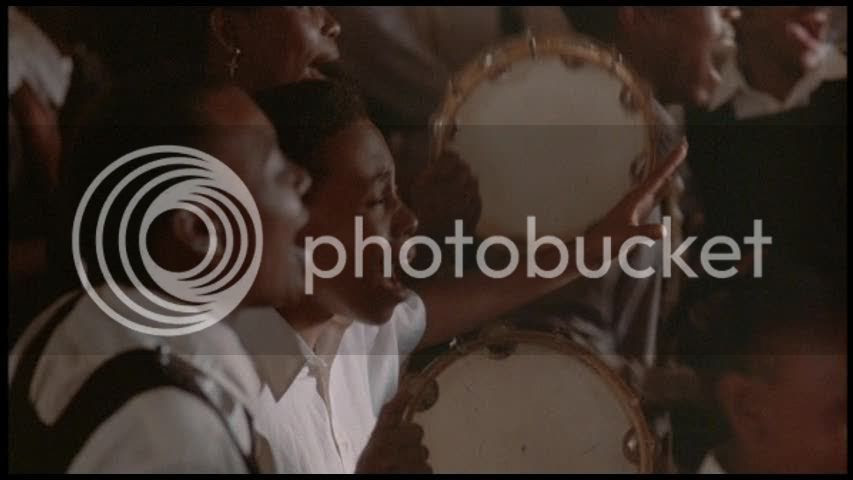 The music was all deeply affecting, especially the protest songs. At times, the pop felt a little early 90s, but the protest songs had a timeless quality. The dialogue was sometimes stiffly declamatory, making it feel very much like a stage show brought to screen, but this is a minor quibble. Overall, the use of foreshadowing, the parallels, and the structure of the narrative, were all spot on. This is a great film, highly recommended.

Posted by a ppcc representative at 13:52

I haven't seen the film, but I saw the stage show a long time ago. It was wonderful. Great music! Thanks for the reminder of it...will have to look for the movie now.

It's been sooooo long since I saw this movie--maybe since the year it came out (holy cow I'm old). I remember it vaguely but maybe I should look it up again to see what grown-up me thinks.