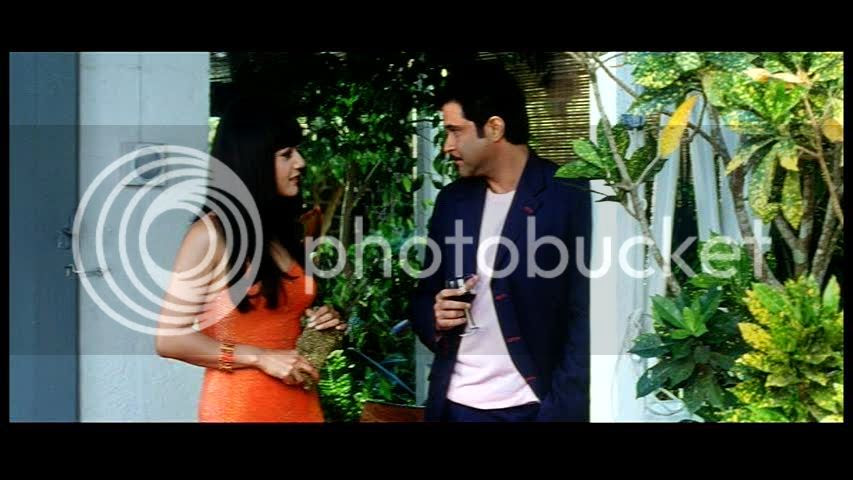 The unexpectedly true-to-life "It's midday and I've had 2 glasses of wine and you're looking pretty fly" scene. When did we fall into a French sex drama!?

It's already been made in Japan by acclaimed director, Akira Kurosawa, where all the same themes - the wise, humanist pater familias doctor, his team of doctor underlings, the romance, the melodrama, the sweeping shots of mountain vistas - were present. And we got a distinctly European vibe from the movie too - maybe something French and a little family-unfriendly. No wonder they sent it to Cannes. 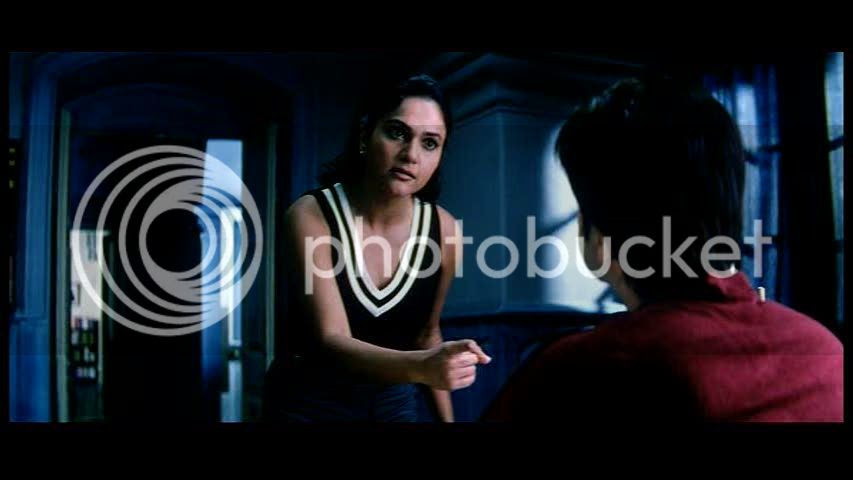 This is my empowered female gesture. I will bare my shoulders. I will kick your ass, professionally.

A little bit all of these things, with a dash of filmi masala, Armaan is a very familiar story. Elder Dr. Siddarth Sinha (Amitabh Bachchan, in a terrible wig) is the standard kind-hearted, humanist country doctor. His adopted son is Dr. Akash Sinha (Anil Kapoor), who shares basically all the same qualities - good heart, good work ethic, pure vanilla inside. These two bachelors live and work in their beloved country hospital and, when not saving poor little old ladies, they like to jam on the violin and - BANE OF ALL INSTRUMENTS - saxophone.

One day, the cute new anesthetist arrives, Dr. Neha Mathur (Gracy Singh). Neha and Akash butt heads for a bit, but quickly fall in love. They are, after all, carbon copies of the same, personality-less being. Their romance, which begins to look more and more like a heavily Photoshopped L.L. Bean catalog, features such vanilla courtship rituals as: watching waterfalls, examining flowers, having picnics on blankets and wicker chairs. YAWN. (What? After the drug-addled Anil and Rani licking cream off each other's faces in Nayak, it's a bit hard to see the two doctors as anything more than incredibly, tortuously dull.)

The random agent arrives in the form of spoiled, OTT rich girl Sonia Kapoor (Preity Zinta) - daughter of tycoon Gulshan Kapoor (a sweetly elderly Randhir Kapoor). Sonia is introduced to us as bored, Westernized and a little crazy. She immediately takes a fancy to Akash - is it the mustache? his studly righteousness? who knows! - and proceeds to pounce him.

We'll stop there. Something then happens - which, if you know movies, shouldn't be very surprising - and, as has happened before in other Anil movies, Akash ends up whoring himself out for his ideals. Tears flow, etcetera. 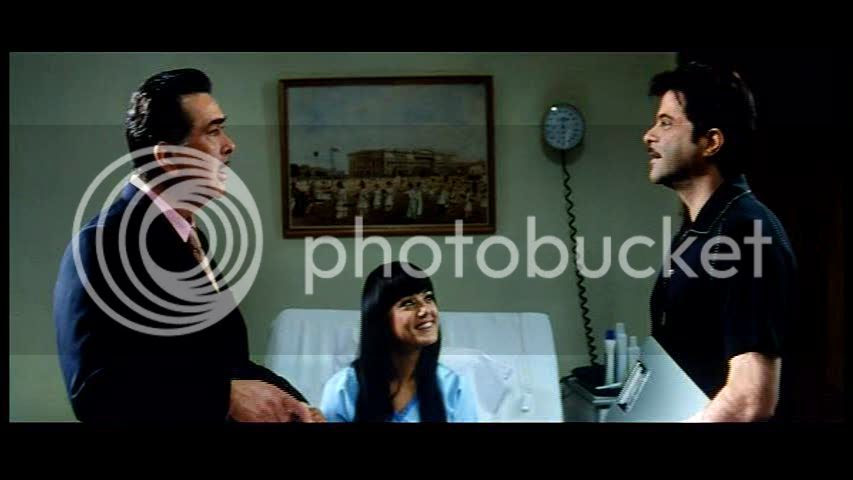 This film is unique for having a distinctly non-Hindi feel to it. The first act, especially, could have been a British doctor drama. All the actors were subdued, nuanced and highly naturalist. It wasn't until the token vamp, Sonia Kapoor, showed up that things went a bit more masala. Even those early songs, like we said, were less Swiss-top romp, more Abercrombie & Fitch ad. We were really impressed with the performances - especially, of all people, Amitabh. Yes, Amitabh! Amitabh is such a force of personality that we always feel the weight of his superstardom in all of his films. In his recent attempts to go a bit off-beat - Black, for example - he always came across as a bit self-indulgent. Instead, in this film, he is a pleasant surprise - subtle and natural. His performance reminded us (indeed, the whole film did) of his work in H. Mukherjee's Mili - another "middle-class" Hindi film. 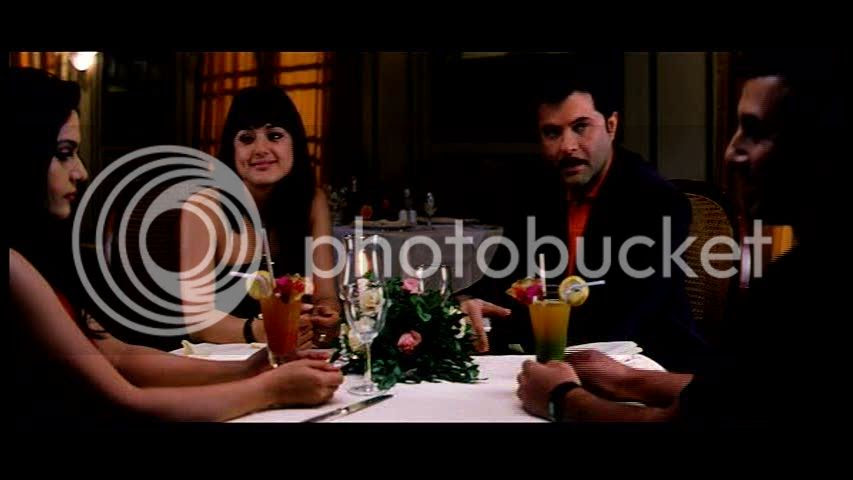 The Scene of Maximum Awkwardness. Nota bene that the guy on the far-right is the modern-day masala Shashi. We kept waiting for him to wobble his head slowly and croak, "Arreeee...Baaaaaat kya hai, yaar?"

Anil is, again, incapable of doing any wrong. Although in the end, after all the drama had resolved itself, we realized just how incredibly dull his character was, we still enjoyed watching him work his usual magic. And we are once again impressed by his choices - every film we've seen this week has been a distinctly different role and context, and he's thrived in all of them. Vah! Preity Zinta did very well considering her thankless role. She did the thing that everyone went crazy for Ellen Page doing in Juno - that is, she used the spaces between the beats to paint her picture. It was a very "read between the lines" performance - a pained glance quickly smothered by another forced, evil smile - stuff like that. Gracy Singh, unfortunately, couldn't revive her character from the depths of dullness in the same way Anil did his. Aamir Bashi, as we said, was basically playing a late 70s Shashi Kapoor... which only made us miss late 70s Shashi. (SHAAAASHIIII!!! KAHAN HO TUM!?!) Actually, speaking of the khandaan, Shashi's nephew Randhir was nice to see. Like brother Rishi, we prefer when that Kapoor generation plays paternal, 50+ roles. They're just so gosh-darned cute!

There were some things we liked a lot about the film. We liked the easy, taken-for-granted non-filmi-ness of it. Good girl Gracy wore jeans and tank tops, wasn't pressured to get married, shed only minimal filmi tears - she even gets a self-reference, "Oh gosh, I thought they only do that in Hindi films!" Ha! There were more hyperrealist touches: the doctors' on-going cricket commentary in the washroom, for example. Another thing we liked was Honey Irani's direction; her use of lighting, while stark, was very impressive at times (e.g. the soft glow of lanterns and the distant twinkle of soft-focus fireworks in this song (which has some spoilers)). Also, sometimes the acting was re-eally real. The scene when Sonia comes onto Akash at the party was surprisingly true-to-life, with that vibe of semi-tipsy flirtatiousness. This is the lighting we're talking about. 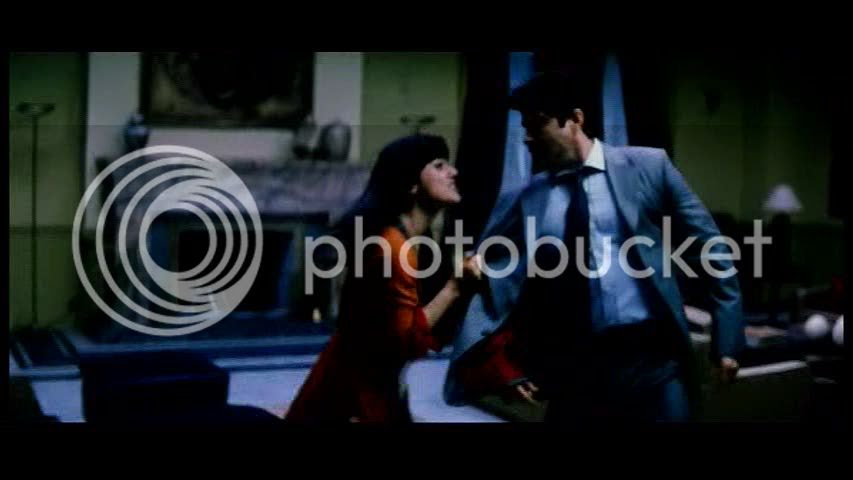 However, there were some things we didn't particularly like. Since the film seemed to start on an intentionally un-filmi route, every sign of filminess - things we usually tolerate with benign, knowing patience - became a flaw. The fact that Amitabh apparently has no idea how to play the violin. The fact that Anil Kapoor removes his mask in the operating room when brains are still exposed to bellow something (doesn't he worry about spittle, for the love of God?!). The fact that Sonia is such a shamelessly shallow vamp. The glaring plot holes, inconsistencies, and needless drama. Gosh darned it, Honey, if you wanted something un-filmi, you should have made it all un-filmi! For example, leave out the songs. With the exception of Preity's excellent come-on "love me or I'll kill myself" song, most of the other songs - especially the boring people in boring love one - were forgettable throwaways that made the narrative stutter and clunk around. The film could have easily dropped them, to its benefit.

Once again another brilliant review (you are on a roll PPCC)

Even when the film is not likely to be to my taste, I really enjoy reading your review of it.


Amitabh is a great actor and one who knows when to camp it up and when to keep it low, both in comedy and drama. He is actually one of those rare actors who can do any role well.
But as you said him being a legend sometimes affects the viewer (not his performance) but if the viewer is willing and ready to let go of the Big B, then a rewarding viewing experience awaits.

And I have never seen The Red Beard and now you have inspired me to do so! (this film will go way below the to see list)

I second Eliza, you ARE on a roll! We are most grateful :-) I think once again your review is probably better than the film, and I thank you for watching it so I don't have to.

I third the previous comments - keep the Anil Kapoor pyaar flowing! (I can't wait to read your take on Calcutta Mail.)

You must have taken every Anil movie off the shelves! I love Armaaan because I got to see my ANIL and Randhir who I love a ton, coz he's such a counter-culture icon in Kal Aaj aur Kal, and Anil was so restrained and was great in his freakout scene with Preity!

Eliza - Ha, thanks, Eliza! And I'm so pleased to hear that you'll be watching Red Beard - I didn't think anyone clicked on the links! I've been impressed by Amitabh, both because of his technical skills and his sheer charisma, in a number of roles, but I still feel like it's hard for him to break out of his (admittedly very successful) "Amitabhy" character.

Memsaab - Ha, the film's not that bad!

Filmi Girl - More, then? Because I have like two more completed Anil reviews as well as a handful more movies to watch. I was thinking, if people get bored, to put up my La Dolce Vita review. But I guess I'll just stick with what works for now.

Rum - I did indeed! I must say I liked the same things: Randhir (so cute!) and Anil punctuating a quiet performance with a couple meltdowns. He does those so well!

Whoa, you guys are so fast lately! I'm totally impressed, and grateful to find out all the Anil goodness. Anyway, I really want to see this one, if only for the Anil/Preity moments, but I'm glad to be forewarned about the filmi weirdness. ;-)

We just watched this last night. Not one of my favorites, but no too bad, either. My 13 year old son declared it "excellent" though he couldn't tell my why. Our big nagging question was what happened to the little boy? We were sure Anil was going to adopt him but he disappeared. I've never thought much of Preity Zinta but I though she was brilliant here.

Thanks for the review. You're always pointing out something new for us!

Ajnabi - Looking back on this film through the mists of time, I can say that it is decent and likable enough. The Anil/Preity song is a definite high point, and I would recommend just fastforwarding through those early LL Bean numbers.

Magpie Ima - Music to my ears! I love hearing about reader reactions, post-review! And OMG, you're right - that little boy! That would have been the perfect parallel of the whole Amitabh/Anil adoption thing anyway. Preity was wonderfully catty, wasn't she?