Have you guys ever seen the Korean film, Oldboy? It's a great movie. A stylish, intense, hyper-violent thriller with a plot like a bullet train. It's one of the Founding Films of the PPCC - something we always wanted to write about, and decided to start a blog to do just that - yet it lingers on our To Review list for an embarrassing 1.5 years now.

Now that we've just watched a very similar Hindi movie, Calcutta Mail, we're reminded just how good Oldboy is, and how we really should get to reviewing it. 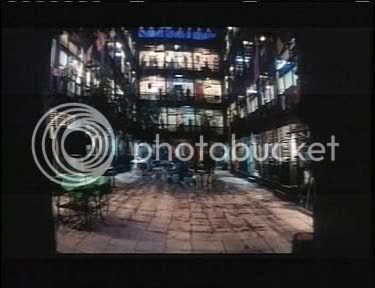 Lots of great shots of Calcutta. See the chawl! 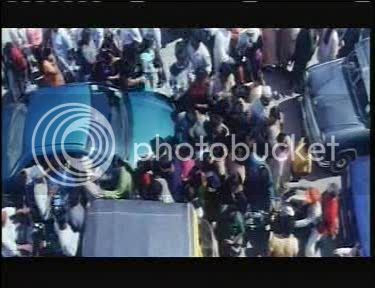 The parallels between the two films are eerie, though the plot of Calcutta Mail differs in several key respects (and it's a remake of a Telugu film, Choodalani Vundi, anyway). In both films, we begin in media res, with a tormented, haunted protagonist getting harried by all sorts of goons and bad memories. (Oldboy shows us at least some of what's haunting protagonist Choi Min-Sik - being forcibly imprisoned for 15 years without any apparent justification.) Both protagonists are likable Everymen who are driven by an intense and mysterious desire for revenge (and gosh, they even resemble each other physically!). Both have iconic moments of totally flipped out intensity - the scene in Oldboy when Choi Min-Sik eats a live octopus, or the scene in Calcutta Mail when Anil manages to blow a police officer's desk aside by the sheer force of his screaming. Both films feature a seemingly implausibly bubbly female foil, a perky potential girlfriend who both aids the protagonists and keeps their tenuous morality in check. And, of course, both films are moody, dark thrillers that leave the final mystery's details unsolved until the very, very last moment. Both have some pretty kick-ass fight scenes, though Oldboy's (especially that legendary single tracking shot in a corridor) are generally better. That said, Calcutta Mail is dark, fun and intense. It is a genuinely thrilling thriller.

Without giving too much away - as the mystery of the narrative is one of Calcutta Mail's strongest points - the film begins with our harried hero, Avinash (an exhausted-looking Anil Kapoor), arriving in Calcutta from Bihar. He is searching for one Lakhan Yadav (Sayaji Shinde), and is, by his own account, bahut pareshan ("very troubled"). As he phones shady-looking goondas at mysterious telephone numbers, he arouses the interest of the evil Lakhan himself, who starts trying to kill him. Meanwhile, Avinash finds a room in a chawl (yay! we love chawls!) with the zesty Bulbul (Rani Mukherjee). Bulbul, an aspiring writer, is immediately attracted to this mustachioed Byronic hero spending sleepless, weepy nights on her balcony, and she - by way of two songs (one which is completely inappropriate considering the film's vibe and one which is an adorable fantasy) and some fake drama - weasles her way by Avinash's side. Her support becomes very useful as knife fights, train crashes and Manisha Koirala scenes begin piling the problems up. 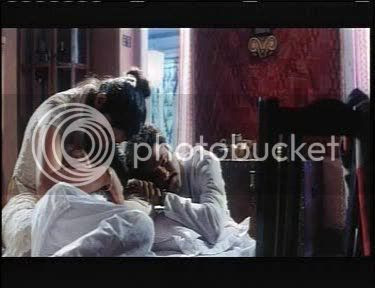 The director, Sudhir Mishra, is an expert at building and maintaining tension. He establishes it with brooding "before the storm" moments and punctuates it with excellent editing - for example, there are several scenes where he'll cut away from the drama, just when Anil is to be squished by two oncoming trains, to show us a wide shot of the countryside, or the city. "Argh!" we would scream. "You tease! Show us what happened!" And he always does - don't worry. His camerawork provides excellent pacing - shaky, disorienting fight scenes, sweeping mob scenes, and quieter stuff for intimate moments. The palette - if our crappy VCD can be trusted - is muted and filled with shadow. He makes everything - even the expected comfort of a homey middle-class chawl - look hostile and threatening. 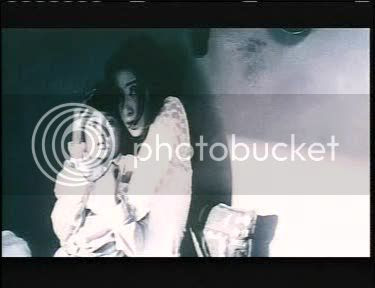 Some things to note, for those that have watched the film:
Anil Kapoor, newest PPCC favorite, is a legend, as usual. One of our favorite things about our favorite actor, Toshiro Mifune, is how he would totally flip out sometimes. He would just lose it! Indeed, our highly-honed and practiced Toshiro Mifune Impression is us, spouting garbled Japanese ("Domo arigato!!! Ohaio gozaimas!!! Toshiro Mifune gas ki des!!!") at an increasingly frenzied pitch. Anil has some similarly demented scenes of maximum voltage - and we loved it! It was intense and it was awesome! He's good at those. We were also impressed by how sleepless he really did look - method acting, or cunning lack of make-up? 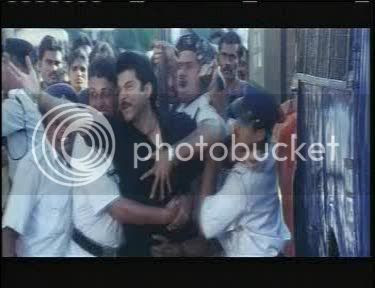 One of the very satisfying Anil meltdowns. MAXIMUM VOLTAGE!!!
Poor Rani had a bizarre role and did what she could with it. Her scenes of light-hearted teasing, her invented drama and total initial misunderstanding of the gravity of Anil's problems were loud false notes in the narrative. Unfortunately, the best she could do was get out of the way. This is a shame, since a well-written girlfriend/sidekick would have been a treat and Rani's always great. Alas, we'll retreat back to Nayak for the Anil/Rani jodi (tho thweet!). Sayaji Shinde was an excellent villain. He managed to project a sort of demented explosiveness coupled with moments of creepy vulnerability (ughh, his scenes with Manisha). Manisha Koirala, who we haven't seen since Dil Se, was acceptable but made us miss Rani.
Posted by a ppcc representative at 11:03

Hello PPCC,
Nice take on one of my favourite Anil Kapoor movies. I too enjoyed him tremendously here, along with Rani Mukherjee (shivers down my back) and Sayaji Shinde (more shivers down my spine).
All this even if Sudhir Mishra has done much better!
Cheers

I liked Calcutta Mail a lot. But I just watched Mard and loved it...so uhhhh...mmm....hm.

I really like this movie, the camera angles and tension building! Anil always is the best freakout scene actor, whether its shouting or throwing stuff around he's up there on my list along with Orson Welles in the rosebud freakout scene, Rani had so little to do here, and i much preferred Manisha here, coz it reminded me of my favorite romantic epic of all time 1942-A Love Story, which i definitely recommend as required Anil Pradesh viewing!
I found it soo odd that Satish Kaushik played the behind the scenes villain, I can only picture him as Calendar to my Anil's Mr.iNDIA!

Yooohooo! Oldboy is one of my favorite films (I also recommend Sympathy for Mr.Vengeance if you haven't seen it yet)

"Both protagonists are likable Everymen who are driven by an intense and mysterious desire for revenge (and gosh, they even resemble each other physically!)"

Interesting comment since to me one of the good things about Oldboy is that the protagonist is not really likable. He is simply stupid (in the worst possible sense).

Now I really want to watch Calcutta Mail. And maybe it is needless to say but I'll say it anyway;an Oldboy review would be such a treat :)

I really enjoyed Rani's role and that inappropriate song! I really wished that the film had been about her with Anil being the mysterious stranger who enters her life - I think it would have worked a lot better that way. :)

Yves - Send us more Anil and Sudhir Mishra recommendations our way! We need all the help we can get as we navigate these treacherous new waters.

Rum - Oh yes, 1942! That's going on the list. Agreed that poor Rani was given a pretty crap job (though I still loved her!).

Eliza - LOL! Well, I think Choi Min-Sik is pretty gosh-darned lovable, and, while his character was certainly stupid and mean, I still max sympathized with him. Oldboy review is definitely coming... one of these days! (I need to defend it from all that bashing by Manohla Dargis at the NY Times.)

Filmi Girl - For some reason, I really preferred the second "me and Anil, tho thweet" song compared to the first, since the second one was such an adorable fantasy. It reminded me of Jahan Main Jaati from Chori Chori, where Nargis suddenly imagines her and Raj Kapoor as puppets in a theatre show. In both songs, the guy, Anil or Raj, gets to suddenly cut loose and behave in a radically different, OTT way. So much fun!

"If" you want a more direct copy of Oldboy and haven't done so already, check out Zinda (with Sanjay Dutt and John Abraham). Although be forewarned, it's by the same director as Musafir (which was also largely a copy).

Thanks, Filmifan! I had found some mentions of this direct copy when I was researching this review... I'm far too curious to resist! (And hey, I've got nothing against the direction of Musafir. In fact... I still can't pinpoint what, exactly, I disliked about Musafir so much.)