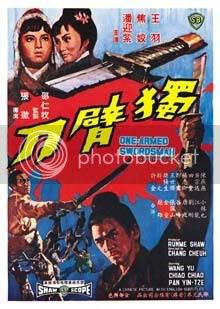 Dubei dao (The One-Armed Swordsman) is much touted as a staple classic in the martial arts wuxia genre of Hong Kong cinema. According to this article, the film's significance is that it established a number of trends which would later define the genre: heavy bloodshed, alienated anti-heroes and - disappointed "aww!" from the feminists among us - the shift from a female to male perspective. The PPCC doesn't know enough about old school wuxia to comment on this; can anyone recommend some of the female-perspective classics pre-One-Armed Swordsman?

The One-Armed Swordsman's titular protagonist begins with two arms. Back in the day, Qi Rufeng's (Feng Tien) Golden School of martial arts was attacked by some bandits. Rufeng's servant, Fang Cheng (Feng Ku), died trying to defend him and - in exchange - Rufeng agreed to teach Cheng's son, Fang Gang (Yu Wang), in the ways of awesomeness. Yet as Fang Gang grew up, the other students - who we like to call Lavender (???), Lumpy (???) and Crazy (Yin Tze Pan) - were always bullying him. One evening, they confront Fang Gang in the forest and, after repeated challenges for a martial arts showdown which he refuses and/or easily brushes aside, they satisfy themselves with... cutting his right arm off!

It is, in particular, Crazy Lady who cuts off Fang Gang's arm, later claiming she did because of her tumultuous love/hate feelings towards him. Whatever, crazy lady! Keep her away from sharp objects!

Fang Gang's got one arm and half a broken sword. And he can still kick your butt.

Anyway, Fang Gang hobbles off and collapses into the boat of the pretty (and sane) Hsiao Man (Chiao Chiao). As Hsiao Man nurses him back to health, he despairs that his life will now be meaningless without martial arts. Yet, after the pair are harassed by some wandering goons, Hsiao Man finds her father's old kung fu manual which - irony of ironies! - was accidentally set afire and only the chapters on left-handed techniques remain! Despite promising the pacifist Hsiao Man that he will soon abandon martial arts to lead a pastoral existence in the country with her, Fang Gang trains himself in left-handed swordsmanship - just in time for the massive showdown which is brewing between his old Golden School and the villainous brothers, Long-Armed Devil (Yang Chih-Ching) and Smiling Tiger Cheng Tianshou (Tang Di). As Long-Armed Devil and Smiling Tiger pick off the more inept Golden School students one by one, it's up to the mysterious one-armed swordsman to defend the very people that maimed him.

The Golden School of martial arts, good at losing and quasi-accidentally cutting each other's arms off.

This is a fairly entertaining film told, to our eyes, in a straightforward, lightweight way. Indeed, if we hadn't been told it was a classic, we would have assumed it was just a throwaway 60s martial arts flick. This article provides interesting commentary:


"Virtually every aspect of this film has been exceeded and improved upon by later offerings, but this is where it all began in its primitive violent form...With One Armed Swordsman the ultimate anti-hero was born; a macho, resolute, honour-bound character who had little to live for, but a lot to die for."

Since we live in a post-One-Armed Swordsman world, it's difficult to gauge the importance of this film - much like it's difficult to explain the importance of, say, Dilwale Dulhanie Le Jayenge to Hindi cinema to someone who's only ever watched Shah Rukh Khan films. As we said earlier, we'd be very interested in seeing a typical wuxia film from the pre-One-Armed Swordsman days.

Posted by a ppcc representative at 20:00

Be warned of the One-Armed Swordsman/Zatoichi film. It's one of the worst films of both series with a plot that hinges on the fact that the Swordsman is transcendentally stupid. Very disappointing.

Concerning typical female-centric wuxia, I'd recommend Come Drink With Me by King Hu - although it's not as centered on its heroine as it could be (or would wish for). Almost anything starring Cheng Pei Pei fits your bill; her Shaw Brothers films are all solid to great qualitywise.

Wow, I have been away for sometime and so many goodies piled up to read :) Thnx PPCC!

Actually I think wuxia is mostly gender blind; heroines can be stronger or more talented or smarter than the heroes (sometimes all three at the same time) and there are very important characters who actually change genders (for this I highly recommend Swordman II -nothing to do with Swordman I) So wuxia is highly recommended in that regard.

Now I can also recommend Come Drink With Me for a strong heroine but it is not a fave of mine (actually I'm kind of turned off by the sets and especially the props of Shaw Brothers films so I haven't seen that many)
King Hu is an excellent director, and to me "A Touch of Zen" is actually a masterpiece of cinema.

Anyway returning to wuxia with strong female characters, I can recommend Crouching Tiger Hidden Dragon (if you haven't already seen it), The Bride With White Hair (I have fondness for this one and not only because Brigitte Lin is my all time fave actress and Leslie Cheung is an actor whose death I still mourn but also it is visually very impressive) , Wign Chun, Deadful Melody, Moon Warriors... (of course there are more but those are the ones immediately sprang to my mind -

and for something really wacky: The East is Red and Kung fu Cult Master.

Not wuxia but I have a feeling that you'll enjoy "Peking Opera Blues" and "Heroic Trio".

eliza bennet: I can see how being turned off by props and sets makes the Shaw Brothers a problematic proposition. Personally, I very much like the artificiality. My favorite wuxia director of their output is Chor Yuen, who was always extra artificial and avoided location shots to have as much control about the look of his films as possible.
(I didn't recommend his films because they very much fall into the "after One-Armed Swordsman" chapter).

Wuxia should come with a warning label - highly addictive! I've found myself getting more and more obsessed with them and this comes in a very good hour: I'd just about exhausted all the modern eye-candy wuxia and this post makes me think I might now be ready to cast aside my shallowness for some old school goodness.

I second Eliza's recco of The Bride with White Hair. It's what got me hooked in the first place.

Complete ignoramus chiming in here: how does one pronounce wuxia? Is it whuck-see-uh or woo-she-a or what?

Yes! One Armed Swordsman is such a great film, right up there with A Touch of Zen and Come Drink With Me. The sequel is also great. A couple other Shaw Brothers classics that I highly recommend are The Lady Hermit (also starring Cheng Pei Pei) and the totally bonkers The Magic Sword.

It makes perfect sense to me that folks who like old-school Hindi movies would like wuxia. When I saw my first masala movie the only thing I could compare it to was A Chinese Ghost Story (technically a hybrid of wuxia, horror and comedy.)

The One-Armed Swordsman has some great scenes...I especially love the part where Fang Gang wakes up in Xiaoman's house and he shouts, "My sword! Where's my sword?!!" and basically breaks down. Jimmy is not the best actor, but there are some parts that hit the right note for me and that's one of them. Composition-wise, the shot where the camera is backing away from the trio in the forest in the snow is just beautiful, in my opinion.

I can't give any suggestions for the pre-One-Armed Swordsman era because I don't really like it. Temple of the Red Lotus is a pretty good movie with Jimmy Wang Yu and Ivy Ling Po. Actually, watching some of the Ivy Ling Po movies might be your best bet to get a feel for the pre-swordsman days (and get some musicals in the bargain). Come Drink with Me is a pretty movie, but sort of boring. I prefer Golden Swallow, which is sort of a sequel, but not really. Give me Jimmy, Chang I, David Chiang or Ti Lung and I'm in heaven.

(Can I gush any more here?)

houseinrlyeh, I understand what you mean about liking that artificiality (is that a word?)and sometimes I like it too but in
Shaw Brothers films it feels like it is not a conscious artistic choice but a compromise in budget not enough compensated by the rest of the film.

God, I still shudder remembering that shiny razor in 36th Chamber of Shaolin.

Wuxias post Show Bros were also not really that conscientious when it came to props etc. but they are charged with so much energy and that special something I can't name (and can't find in the majority of Shaw Bros films)

eliza bennet, yes, I can get behind that, some films just aren't the right ones for one's taste. I'm kind of lucky in that I can enjoy Shaw Brothers, none Shaw Brothers, earlier wuxia, later ones etc.

houseinrlyeh - Bless you for the warning and the reccs! But tell me: did you like the Zatoichi/Yojimbo one? Because I know that's considered a weaker Zatoichi film... and yet I loooove it.

eliza bennet - Welcome back and happy new year! Gender-blind wuxia... I sigh in happiness. Thanks for all the great reccs! I might be reviewing Crouching Tiger soon-ish... just got myself a copy (after the first DVD snapped in two from overzealous handling!).

Amrita - OMG companion in wuxia love! It is an addiction. It actually predated my Hindi addiction, so I have fond, nostalgic feelings for it too.

Memsaab - Your dil's just gonna have to get bigger! That's how I fit all my heroes inside.

Ajnabi - I thought it was "woo-kshah" until Brian commented!

Brian - Yes, more reccs, thanks! I love you, you knowledgeable readers.

Long Haired Spider - Ahh, I thought Jimmy Wang Yu was wonderfully boyish and earnest. Definitely need to see Return of the One-Armed Swordsman, and thanks for all the other reccs!

ppcc represantative, I'd call Zatoichi meets Yojimbo one of the strongest of the Zatoichi films, not necessarily my favorite, but still one of the best. If I had to guess I'd say people have problems with Zatoichi not looking as heroic (or at least nice) as in other films.
But: those two actors? Together? Impossible not to love for me.