Subhash Ghai's hit film, Karma, is a silly and entertaining masala romp whose high point includes a scene with Anil Kapoor dressed as a cross between a Mexican bandito and a bumblebee. 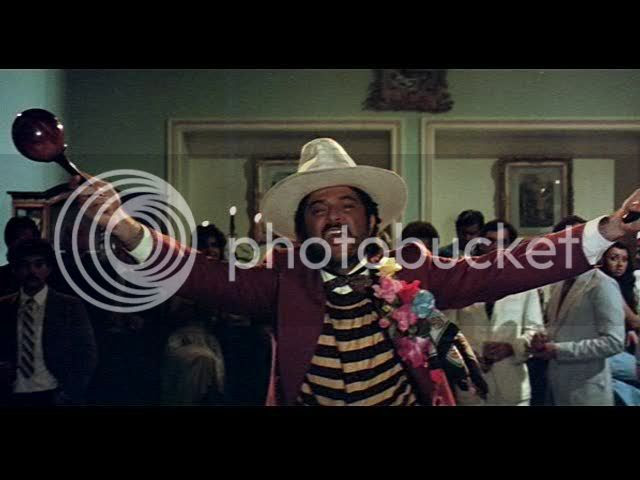 Karma is a mish-mash of xenophobic nationalism and the old Dirty Dozen-esque "reformed convicts go on a suicidal mission" cliché. Our hero is Vishwapratap Singh (Dilip Kumar), a jailer who believes in rehabilitating prisoners (and family members) via rousing patriotic anthems. One day, he catches the dastardly quasi-British, quasi-Pakistani, quasi-something foreigner, Dr. Dang (Anupam Kher), who - along with token White Masala Villain (Tom Alter) and a John Lennon lookalike (Shakti Kapoor) - runs an "evil empire" whose only goal is to destroy India. Dr. Dang vows to escape from Vishwapratap's clutches - and indeed, he does so, setting off a series of explosions which destroy Vishwapratap's home and work, killing off most of his family and all the prisoners. Dang, Dr. Dang! 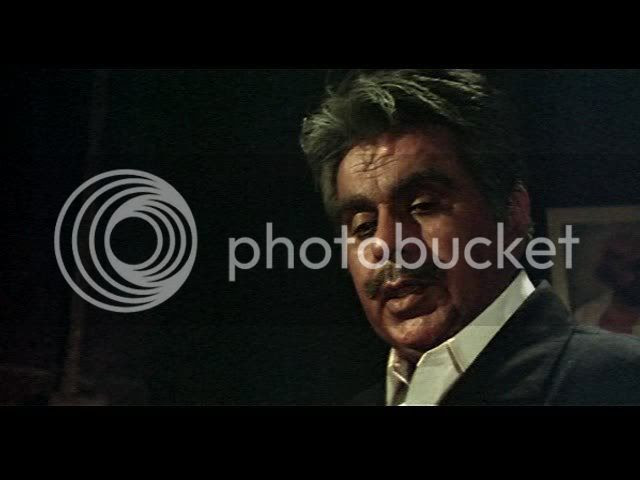 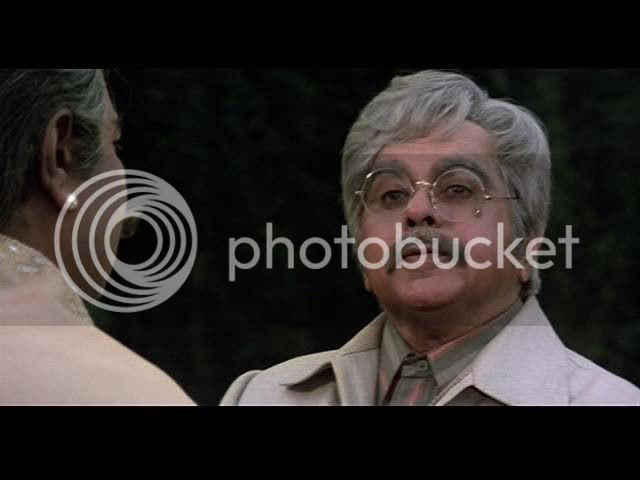 Vowing for revenge, Vishwapratap officially retires and adopts the alias of "Dada Thakur", secretly recruiting three death row convicts - the murderous Baiju (Jackie Shroff), ex-terrorist Khairuddin (Naseeruddin Shah), and... clumsy goofball Johnny (Anil Kapoor) - for a suicidal mission to destroy Dr. Dang once and for all. Don't ask us what Johnny did to get on death row; it's never explained, and we kind of think he just accidentally bumbled his way into prison in that kooky, ridiculous way of his. Maybe he was there for crimes against fashion? Anyway, as the three convicts begin their special training - which mostly involves driving around the Himalayas in an armored truck, sneaking sips of Johnny Walker and teasing each other - Baiju falls in love with the fiery Radha (Sridevi), while Johnny is ensnared by a superstitious village belle, Tulsi (Phoonam Dhillon).

The story's not really about destroying Dr. Dang, which is just a flimsy gimmick meant to string along what we're really interested in: the bromance and eventual redemption of the three "anti-socials" Baiju, Khairuddin and Johnny. In a touching parallel, Vishwapratap's two sons were killed by Dr. Dang's bombs and, little by little, he begins to see them in Baiju and Johnny. (Indeed, one of the sons was even named Anil! Eerie.) Meanwhile, humorless Khair is full of rage due to a past tragedy, and he eventually becomes the trio's older brother figure. The chemistry between these three actors is great and the only reason we enjoyed this film as much as we did. No one else in the cast has that much to do - even lovely Dilip Kumar, Sridevi, Phoonam Dillon, Bindu (?!), Anupam Kher - since so much time is spent with the trio and their massive charisma. And even within the trio, the Jackie/Anil jodi power tends to overshadow Naseer. That said, poor Naseer is saddled with maybe the heaviest, gloomiest role in the film, so that he mostly shouts a lot and his rare smiles are like shafts of sunlight on a cloudy day. Oh, Naseer! 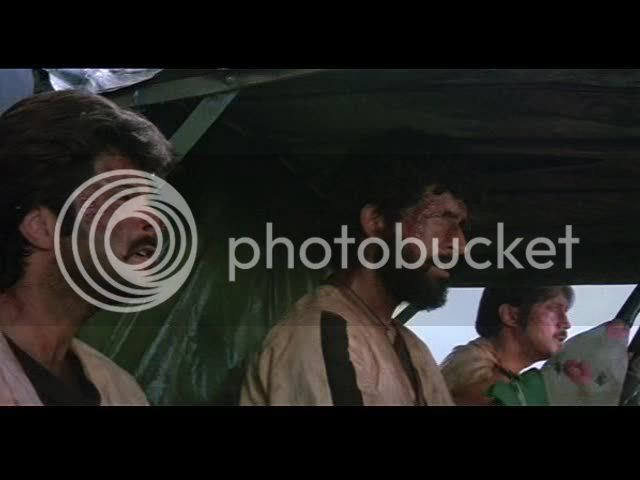 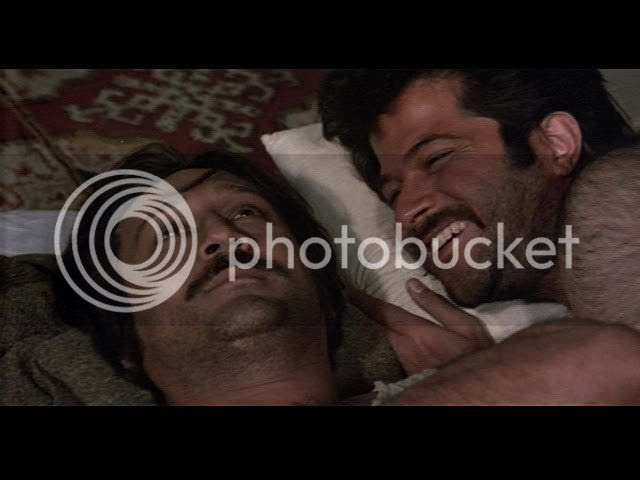 The Jackie/Anil fraternal love is always so sweet. 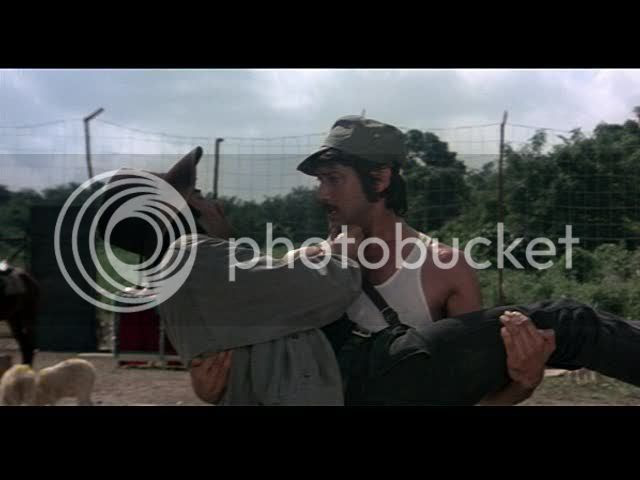 Normally, when films talk about terrorism or feature villainous, dictatorial foreigners intent on destroying the desh, we at the PPCC have ample commentary to make. This time round though, we can't really critique the film's sociopolitical themes since they seem so blatantly... silly. Even the over-the-top Kranti was a more thoughtful film, since it was addressing - in its zany, one-sided way - a real historical event: the British Raj. Karma's foreign villains, instead, are paper-thin inventions. Where is Dr. Dang from, anyway? His "evil empire" has its own flag, uniform and small fort - they just seem like loons with too many coconut bombs, not real threats to the Indian nation. Heck, even Mogambo did a better job of destablizing the country - who knows what the rupee's inflation rate was with all that adulterated food on the market! The cackling Dr. Dang seems pretty useless by comparison; he just has a personal beef with Vishwapratap, probably because the latter didn't give him a cushioned seat when he was in his prison.

Most of the songs were unremarkable, though some of the picturizations were fun. Subhash Ghai's direction was generally good and his camerawork just sucked in the Himalayan background - the colors, compositions and everything were beautiful and striking. Overall though, this film wouldn't be half as good as it is if it wasn't for the studly Jackie Shroff, the incredibly lovable Anil Kapoor and the subtle Naseeruddin Shah, so if you're a fan of any of them - and goodness, you should love all of them, they're so fab! - we recommend it. 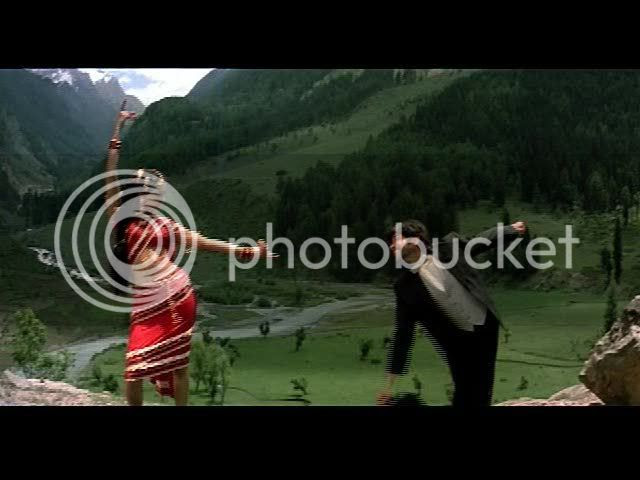 Oh, Subhash Ghai, you win our hearts with compositions like this!
Posted by a ppcc representative at 10:37

Ohhh ppcc, you always make me happy with the ANIL reviews, this was a fun stupid romp but it all felt a bit empty to me, perhaps coz i watched the indoctrinated-into-my-brain Anil movie "Meri Jung" also with Nutan! But i was super happy to see Poonam and Naseeruddin as a somewhat commercial guy~

Argh, even the side view of the body fur is putting me off my feed! Which is a good thing this time of year!

Once again, I feel bad for poor ol' Tom Alter, forced to lisp his words and clench his jaw when he's so much better. Why am I the only one who loves Tom Alter?

Amrita, I too love Tom Alter. More precisely, I want to speak Hindi and Urdu as well as he does :)

Haven't seen this, maybe I'll give it a try just for the great cast! Sometimes the story really doesn't matter (as long as it doesn't enrage me)...

Amrita - Aww, poor body furred Anil! And YEAH for Tom Alter. I often fantasize about becoming the next Tom Alter. He's great - you're not the only one that loves him!

Memsaab - This one was definitely good, but not great. I'd say a B... not quite the epic spectacle of Tezaab or Ram Lakhan, but similar and fun.