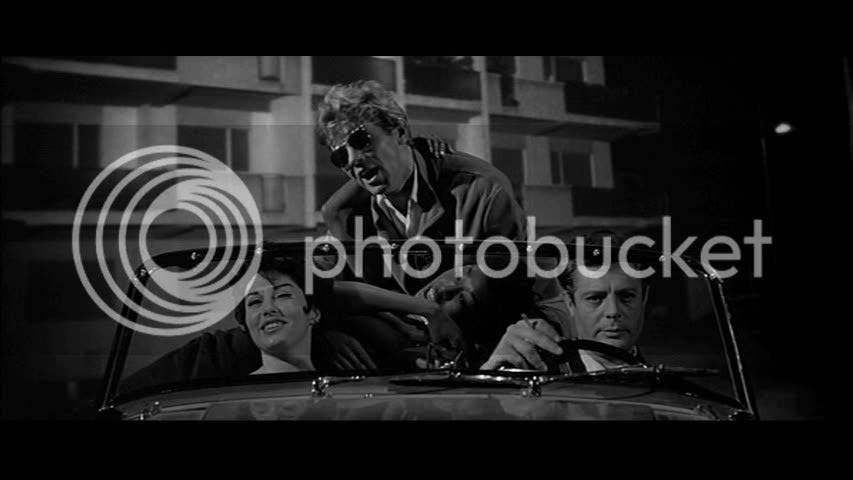 A typical scene from Fellini's classic. The drunk guy in the back is named... Paparazzo.

Hedonism - especially drinking and partying - has been explored in a number of ways. From the tragic wallowing of Devdas, to the bittersweet romanticism of Naina, to the awful hyperrealism of Aberdeen - whatever you think of the demon drink, you can probably find a film that suits your fancy. But if you want a film that sucks all the fun and glamour out of partying and makes you seriously consider taking monastic vows, watch La Dolce Vita (The Sweet Life).

Like Rashomon, La Dolce Vita is one of those Perfect Films. Directed by the most famous (especially among trendy Anglo-American intellectuals) Italian director, Federico Fellini, it follows the surreal life of a tabloid journalist, Marcello (Marcello Mastroianni), as he navigates the glitterati of 1950s Rome. On the surface of things, Marcello really is living the "sweet life" - he schmoozes with rich and beautiful stars, he is beautiful himself, he is out every night in the top-end, trendy nightclubs and restaurants of Via Veneto. Even better, Marcello enjoys a position of relative privilege, since he is there to expose this world and generally he can pretend to remain untouched, unsoiled and "above" its debauchery. Marcello is cool as a cucumber, in all senses of the word: he is neither fawning fan nor judgmental outsider. Instead, he easily slips in and out of a variety of situations - the film follows him through nightclubs, prostitute's homes, decaying palaces, and, of course, into the Trevi fountain - as an agreeable, unassuming participant. Marcello's private, gnawing frustration at the superficiality of the "sweet life" is only revealed in his attachment to his bourgeois intellectual friend, Steiner (Alain Cuny), and his stubbornly co-dependent relationship with his Good Italian Girl, Emma (Yvonne Furneaux). Marcello's despair can only be seen in the beading sweat on his forehead. But the tension between what Marcello wants - something more, something deeper and more satisfying - and what he has - access to glamour, material wealth - is never resolved. In fact, the climax of the film leads to Marcello's spiraling decline and things end on a particularly bleak note. 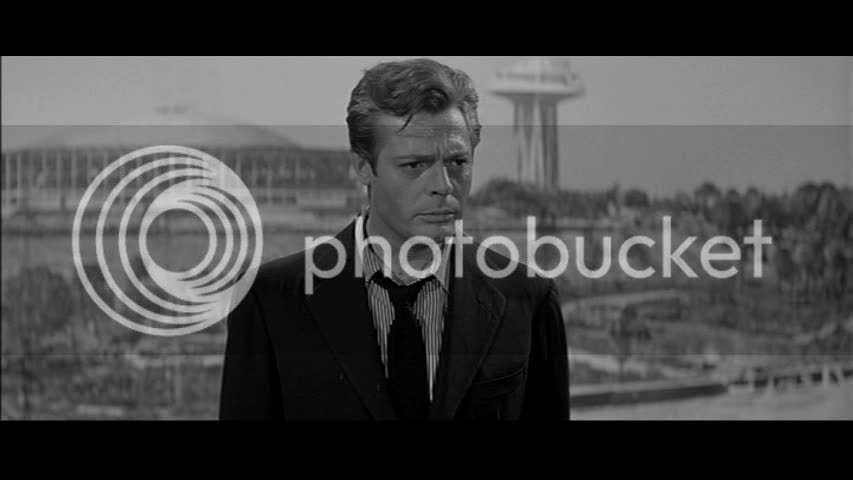 A frazzled, despairing Marcello, at the end of his tether.

Like many classics, the film is powerful on a number of levels: a commentary on celebrity culture, on the Italian - and especially Roman - obsession with la bella figura (i.e. the philosophy where aesthetics are all-important), the boredom of parties, and on materialism versus true happiness. Poor Marcello never quite finds the joy he's looking for - mostly because he keeps searching for it down the wrong paths. When the most promising path - a dedication to bourgeois intellectualism; the Steiner route - turns out to have the most horrific end, he despairs. Things fall apart, and no amount of artificial sweeteners - drinking, partying, glamour - can ease his truly sour life.

Oh God, that was a horrible pun. Sorry about that!

Anyway, moving on: We'll talk about the bella figura philosophy, since we reckon most of our readers are non-Italians and hence might be unfamiliar with this important cultural concept. La bella figura is an Italian phrase which literally means, "the beautiful figure" or "beautiful image". It has all sorts of connotations in everyday Italian mentality. Whereas "Did you look good?" would sound pretty weird in English if you asked your friend this after a job interview, it's a pretty standard thing in Italian: "Hai fatto bella figura?" It doesn't just mean were your clothes in order and your shoes shined, it means did you project the right image, the correct overall aesthetic: enthusiastic, interested, well-put-together, whatever. In the previously PPCCed Come Te Nessuno Mai, one of the sweetest scenes occurs when protagonist Silvio gets punched in the face by a long-time friend whose girlfriend he's kissed. We then see Silvio in his apartment building's elevator, staring in the mirror and sobbing, "Che figura di merda! Che figura di merda! Che figura di merda!" (Literally, "What a shit figure!")

For better or worse, then, Italian culture valorizes aesthetics. While that may make it sound superficial, we at the PPCC are keen promoters of aesthetics. We like beautiful things. We get enthusiastic about beautiful things. We don't think there's anything wrong with that. Quite the opposite - we think beauty (and the sublime) are highly valuable facets of the human experience! And Italian culture is just very aware of that - this is the culture that produced and embraced the Rennaissance, humanist art, the Sistine Chapel, Donatello's David, Gucci, Prada, our beloved Giancarlo Giannini (see blog banner)! 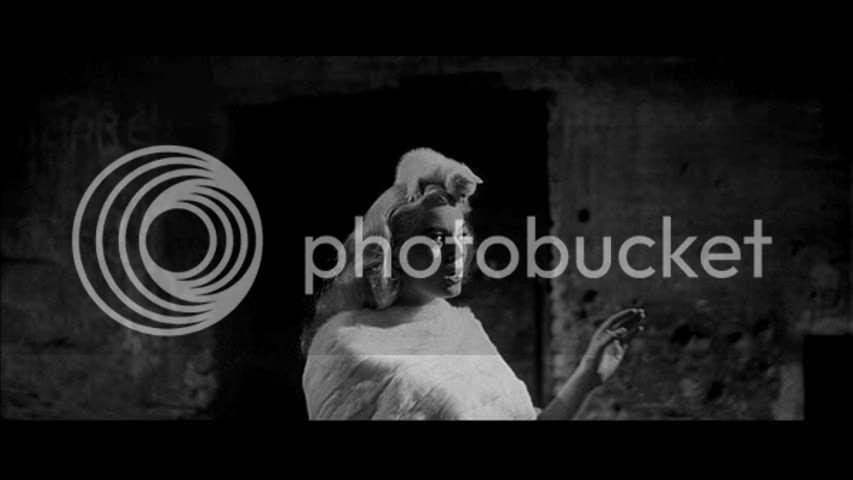 Anita Eckberg has a brief but enduringly famous role as an air-headed visiting Swedish celeb.

However, as with all things, a life based purely on la bella figura is not going to give you everything you need - and, in particular, it won't give you much spiritual satisfaction. La Dolce Vita's Marcello is acutely aware of this. Even as he adjusts his hair and smooths down his (no doubt brand-name) suit, he suffers from the vacuousness around him. He wants more - but he's just not sure what. Domestic comfort and intellectual pursuits aren't the answer - the desperately needy Emma and the surprise of Steiner make sure of that. Religion isn't the answer either - Fellini constantly paints Roman Catholicism in a cynical, post-Christian way. For example, the opening scene is of a helicopter flying over Rome carrying an enormous statue of Jesus Christ with arms outspread. In the helicopter are Marcello and his photographer, Paparazzo (his name is the origin of the term paparazzi; Walter Santesso), and, after flying over a rooftop pool where scantily-clad women are lounging, they pull the helicopter around to exchange phone numbers. Later in the film, Marcello covers a story about two children in the countryside who claim to have seen the Madonna. It's clearly a scam, and the camera lingers on the infirm elderly people who have come to wait in the pouring rain for the children to speak again. Even just little details - such as the crooked, disorienting staircase inside Saint Peter's that Marcello has to climb as he chases after his latest scoop - emphasize this alienation. The Church won't help you, bro! 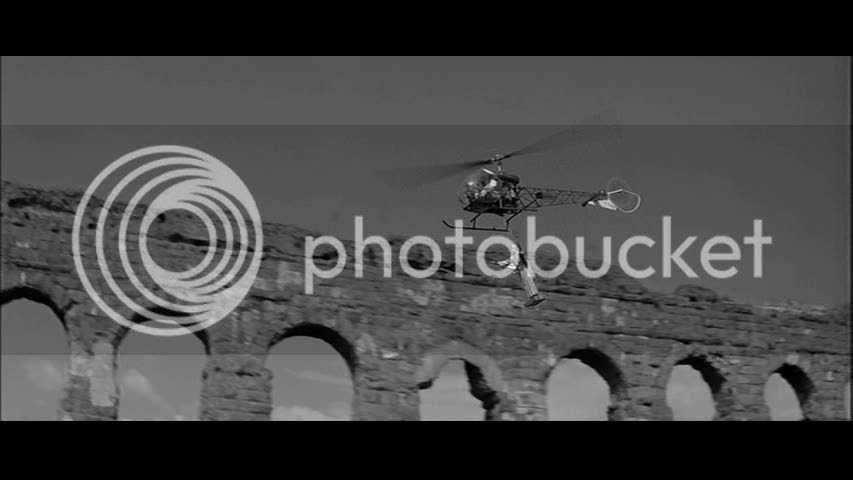 The iconic first scene, as helicopters fly over ancient Roman ruins with a huge Jesus in tow.

And so he's left with his "sweet life" of parties, drinking and superficial "fun". Fellini does an excellent job of undermining any tawdry glamour that lifestyle might have by always including at least one bored, exasperated sober person in the party scenes. This person is both a conscience and a realist; by seeing this person (and it's usually an unimportant character, like a waiter or the guy who owns the house in the end) and their reactions, we see just how pitifully grasping the sweet lifers are. And even worse, they'll be waking up with wicked hangovers tomorrow morning! Marcello begins the film as this sober, disparaging outsider, but slowly slides into becoming a sweet lifer himself - in the end becoming a drunken source of ridicule and pity.

The performances are all top-notch. Marcello Mastroianni was one of the few Roman actors who spoke with barely a regional accent. Instead, his "RP Italian", coupled with his conservative-yet-stylish suits and his blandly handsome face perfectly establish his neutrality as the hero. We read somewhere that Fellini picked Mastroianni for that very reason - he wanted someone who was bland but agreeable, a face that was pretty but not particularly memorable. And Mastroianni is great - he projects the bubbling undercurrent of anxiety and despair in a meltdown-free way. (And we haven't even touched on his excellent portrayal of the ironically impotent Latin lover stereotype!) Everyone else in the film has brief roles - Anita Eckberg is wonderful and iconic as the scarily empty-headed celebrity, Alain Cuny as Steiner is fantastically creepy, Walter Santesso's Paparazzo has a smarmy, cocky, Roman-issimo air, and Yvonne Furneaux as the doomed Emma projects vulnerability and imbalance wonderfully. Anouk Aimée has a small but critical role as Marcello's incredibly posh on-off lover, Maddalena, and she was glamorous and tragic.

The film is long - around three hours - and its episodic nature might alienate some viewers who prefer linear narratives. It's also a total downer, like watching nihilism purified on film, and - as happens, most of the rare comedy is culturally-specific (they satirize Roman-ism a lot). But it is both an important work and a very, very well-made piece of art, so we definitely recommend it.

Posted by a ppcc representative at 01:00

Is the trajectory of Marcello an idea that was really resonant in Italy at the time in certain circles? Like, was this viewed as a brilliant cautionary tale? Or too overwrought? Or what? How did this fit in with contemporary dialogues about luxury, spending (not just financial spending of course), values, etc?

While reading along, I was just about to ask about the church and then you answered that! So thanks! Related question: it seems to me that the Catholic church has done an extremely good job at incorporating, furthering, financing/supporting, and even being attacked regarding the philosophy of "la bella figura" throughout the years. Is there commentary on that in the film - that is, the relationship between that philosophy and this particular major power in Italian cultural history?

Anyway. I have a ton more questions but I will watch it first and then get back to you. I'm totally ignorant about Italian cinema an am all geared up now. Maybe I'll watch with my dad, who spent his junior year of high school in Rome in 1959-60!

Beth - So many good questions! Apart from general issues of materialism and Italianism and so on, I think La Dolce Vita was also famous for capturing a very particular time in Italian history. Via Veneto - where Marcello spends a lot of time hanging around with expat celebs - was REALLY happening back in the 1950s and 1960s, thanks mostly to a lot of those sword-and-sandal Hollywood epics being filmed down the road at Cinecitta (Ben Hur, Quo Vadis, Spartacus...). Italy was still pretty poor after WW2, but Rome became very glitzy thanks to Hollywood's attentions.

In terms of the Church's role in furthering aesthetics, I can't really think of anything. At least, there's no scene that I can recall where anyone notes how beautiful the church is, and the camera doesn't seem too interested either. As far as I can see, it's always just really de-glamorized and treated in a harsh way (e.g. the creepy Vatican shots).

It's such a fab film! I hope you enjoy it!

So the Italians and Chinese have more than noodles in common! Thanks for clearing the bella figura up, I always wonder what they're on about.

Can you say you love something when it's completely depressing?

Shortly after I saw this movie, I saw a documentary about the present day life of Paparazzo and he tried very hard to make it look very james bond-ish with secret cameras and things, and he really is a celebrity in his own right now but it was hard not to look at him hanging out where all the 20-somethings were and have them look at him like he were an exhibit from another era, knowing that he's never scooped anything in years, and not see the parallels to the film. I could be projecting.