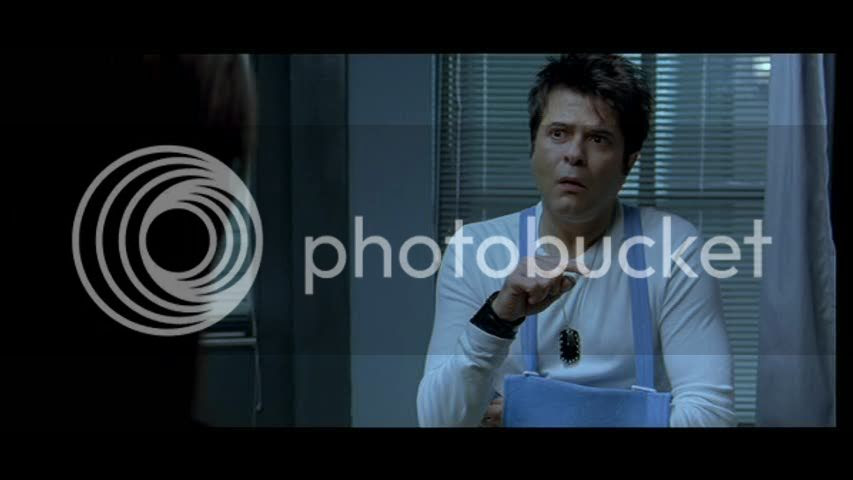 Who's this guy? We don't know. But we love his expression. And, gosh, we're gonna swim against the tide and say, Anil, you should shave your stache sometimes just to mix it up a bit!

"Timepass" is a word that gets tossed around a lot when reviewing Hindi films. We at the PPCC have never actually used it, as we've never been sure what it's supposed to mean. Is it good that time passed? Or is it time that we want back? And surely, PPCC that we are, we watch movies for more than just to... pass the freakin' time. I mean, that happens already!

But Salaam-E-Ishq (A salute to love) is pretty much that: a timepass. It was a neutral companion to an otherwise sociable night, and we spent most of the evening cheerfully indifferent to what was happening onscreen. Every so often, we would turn our attention back to see yet another couple weeping from this seemingly infinite source of romantic melodrama, and we were left none the wiser about what was going on and not really very interested about what happened to who.

In fact, we at the PPCC don't think that we would have even understood most of the plotlines if we hadn't read the Wikipedia entry before watching. They hardly made an impression. And the only plotlines we did pay any amount of attention to - the memory loss one, the adultery one, the white girl one - ended up seeming facile and superficial. Scene one: man is bored. Scene two: man meets mistress. Scene three: affair. Scene four: man asks for forgiveness. What? That's it? 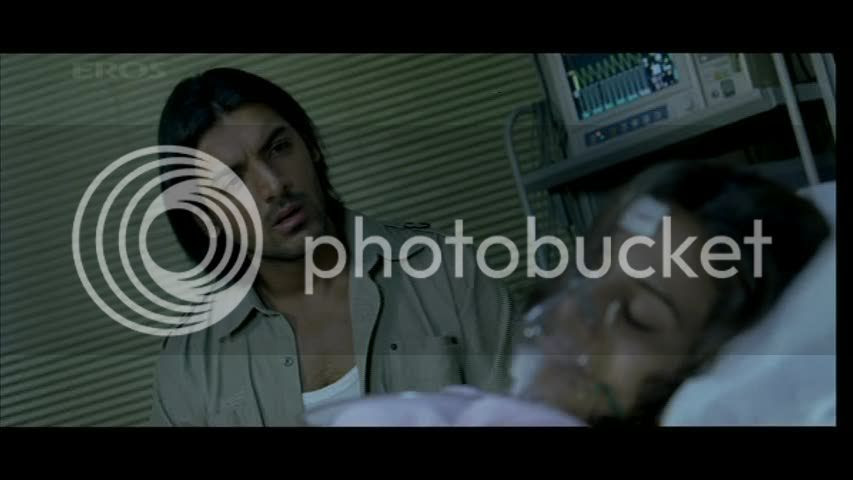 Oh, you poor, sweet John Abraham. You go back to your Dostana and have some fun.

Normally we're big fans of these broad canvas emotional epics, and we love ensembles too. In fact, give us an ensemble of roughly sketched stereotypes any day over some meticulously detailed single protagonist. Better Serenity to, say, Pasqualino Settebellezze. Two hours is, after all, a long time to spend in just one person's head (and, in this case, it was almost four hours!). Plus, we like the Baroque Love, Actually "oh, humanity!" web of life vibe, where significant characters brush shoulders on the street and never realize that they're both living their own private melodramas. That's so true, philosophically-speaking, isn't it? We're all the heroes of our private films.

Yet - and we hate to say this - all the other reviews are correct. Salaam-e-Ishq (whose title is taken, incidentally, from one of our favorite Rekha songs) suffers from too much weight. There's just two many plotlines, too many emotions, and too much happening for a simple PPCC to comprehend. It was impossible to emotionally engage on anything but the most superficial level. Despite talented actors, such as Anil and Juhi, putting in their best efforts - Anil even gets a meltdown! YESSS! - they were the merest fleeting glimpses of people. Partly this was the director's fault, too, as only a supremely efficient storyteller could paint a compelling and deep mini-story with literally four or five scenes. That's not to say the director, Nikhil Advani, doesn't do very well in some moments. The monotony of Anil's London life is established quickly and elegantly with some good aesthetic: repetition, muted colors, faceless hordes. Unfortunately, where Advani's storytelling was tight and astute in some moments, it became bloated and dragged in others - as funny as Akshay Khanna's commitment-fearing bachelor was, the jokes quickly went stale with over-use.

Advani gave himself a fairly impossible task - tell six compelling mini-films in under four hours - and succeeded in lumps. This is a shame, since we enjoyed all the performances - from Priyanka's hilarious third-person Kamini, to Akshay's wailing insecurities, to Juhi's restraint, to Anil's meltdowns (sans stache!), to John Abraham's earnest earnestness, to the unexpected and welcome surprises of PPCC house favorites Prem Chopra and Tinnu Anand! 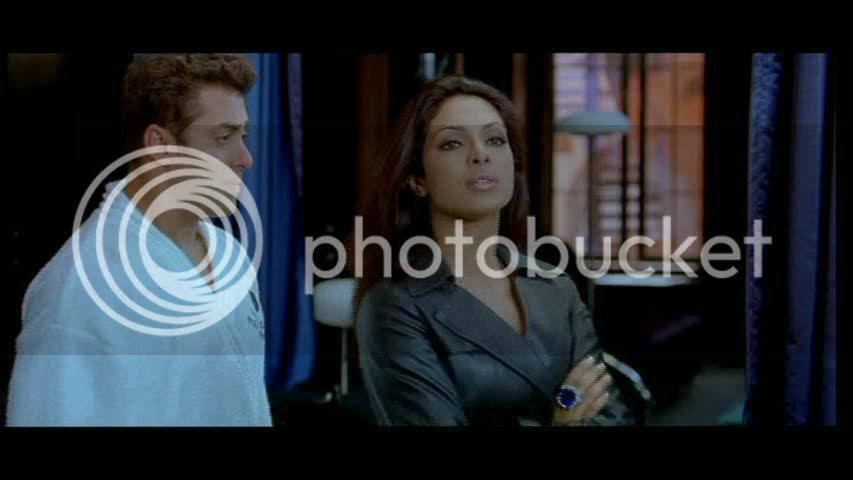 Salman Khan even got the better of us and, when we were paying attention, we had to admit he was kinda cute. Aw, shyucks!

The songs were also quite fab. Beth already warned us that the title song was great - and it was! It was a glorious anthem to the big canvas idea we were talking about. Just watch it and you'll see. But also try to follow what's happening to all the characters, especially as the tempo picks up towards the end - aargh, it's too much, too fast! This "everyone all the time!" show continues into the melancholy Ya Rabba which similarly attempts to capture everything that's happening to everyone and succeeds only partially. We paid attention to what was happening to our favored story threads - those being Memory Loss, Adultery and White Girl - but the rest of the plots just became clutter. And that pretty much goes for the entire film: pretty shots, compelling stories, nice performances, but just too much clutter! It becomes a big old jumble that (inevitably, as we haven't emotionally invested in anyone really) loses steam and becomes an overlong stretch of soap.

Posted by a ppcc representative at 02:27

Awww, S-e-I completely caught *my* attention, PPCC! In fact, it's what first sparked my interest in Anil. I love its cinematography (I think I just misspelled that) and the fun one liners, like when Ayesha snaps at Akshaye, "there's nothing right with you," or when Juhi hedges about Anil's lack of 'stache, "Um... it's different." I even liked Govinda, which I totally did not expect! I love this movie. Love it. But it tanked at the box office so yours is definitely the predominant point-of-view. ;-)

I didn't like this film either, in fact I was mad at me for shedding tears to the celluloid characters on screen...

But this is the first time I have seen Govinda and liked him a lot, despite the just out of hairdresser hair he sported throughout the film.

Ditto Eliza, I liked Govinda a lot a lot a lot in this (even putting aside my own personal resonance with the "lardka abandons gori" failed love story). My overall impression of the movie is "pretty but ineffective and messy." Minus the title song, which I luuuuuuurve.

I love the movie- the songs, the mess and excess and insanity all together- the only hard parts for me were Anil's moustache-lessness, and when the tragic bit in John-Vidya got too much.

Me too on the Govinda thing. But when Govinda is my favorite thing about a film...well.

I agree with Memsaab on both counts. I'll also add that this was the first thing I saw that I *liked* (rather than tolerated) Priyanka Chopra as actress.

The "Tenu Leke" song is really fun, too!

Ajnabi - Well, I don't think it should have tanked. It just left me unmoved and unexcited, since I couldn't get into any of the stories - to my mind, they all lacked depth. That said, there were some very good moments - the mini-drama over Anil's naked upper lip, as you mention, is very cute. I think they should have just dropped the suhaag raat couple and turned the Salman/Priyanka thing into another film altogether.

Beth - You are absolutely correct and much more concise than me: "pretty but ineffective and messy" indeed!

Shweta - I wanted to like this, and enjoyed some of the details a lot, but, yeah, it was just too big for my small dil.

Memsaab - Ha! Govinda was great, but Anil and Juhi were my favorite thing about this. Plus, Anil hits all my fave spots in the UK! I was like, "Holy shit, I've lounged on that iron railing!"

Filmi Girl - Awww, I love Priyanka! I thought she was fab in Dostana, and she was hilarious in this too (plus, she speaks about herself in the 3rd person... like the PPCC!).

awww I love this movie despite the running length, it was great fun though i didn't like the suhaag raat story that much! I loved my ANIL here but he should chop the mush off, otherwise he'll face my wrath, his freakout scene was too good!

I'm with you...this movie had some ok moments (title song, and yes, Govinda!Good point, though, Memsaab), but overall its just something that you can watch with a group of friends and some cocktails and only pay half-attention to.

One confession...Despite my ho-hum feelings for the film, I still pop it in occasionally just to spend time with some of the characters! Its like a Bollywood party!

Govinda was the best bit of this movie for me. The songs were great - and I think they came across better in the cinema than they do on DVD. But I agree that there was just too much going on - cutting a few of the threads (especially the Suhaag Raat couple) would have made it much better. Overall, I thought it wasn't a bad movie - just, not great.

Rum - Ha! I thought he looked oddly expressive and hilarious without the stache. The more I think about it, the more I think he should do it once in a while just so SHOCK us.

Nida - Which is exactly what we did! And indeed it was good for background buzz. Ooh, the Bollywood party - and everyone's invited!

Red42 - Seems like everyone thinks the Suhaag Raaters had to go, ah well.

I;m kind of shocked to even admit this, but my fave bits in this movie were the ones with Govinda. I guess the trick to successful Govinda tolerance is to bury him in the middle of a massive starcast and give him just enough rope so he doesn't run away with it.

It appears my batting average for loving what other viewers don't remains solid. I was so-so with the Govinda storyline. Was nice to see him doing something believable for once. I can see him driving a taxi. I skipped entirely the storylines with married man fooling around, the comedy couple and Salman Khan's storyline (strictly on principle, don't get me started). So which scenes made me sob like a child denied Spongebob after a hard day at preschool? The memory loss couple scenes. John Abraham sells his motorcycle to buy his wife an anniversary gift. John Abraham runs around looking desperately for wifey-poo after a train derailment. John goes to great lengths to help provoke return of her memory. Yep, I was sobbing. The other two stories were not really noteworthy, IMO, though they did interact somewhat with the one I liked so I watched them a little bit. I still bought the DVD just for the memory loss story. Not that I will admit that anywhere else...