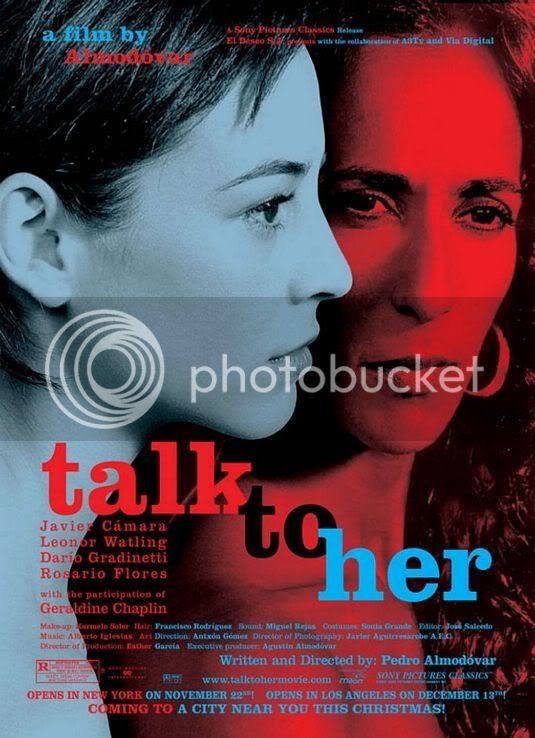 Pedro Almodóvar's films are always a treat - colorful, outrageous, rich, bright and feminist - and Hable con ella (Talk to Her) is no different. One of his better known films, it features the strangest love scene ever recorded in film history (guaranteed!) as well as his usual provocative examinations of gender roles and relationships through an endearingly expressive telenovela-esque lens. Hable con ella also resembles other weird love stories such as The Crying Game or Léon (well, a little bit) in that the central romance is envelope-pushing to the extreme. Prepare to be provoked.

Love and longing are central to this film, and couples abound. The first couple are the sensitive, tearful Marco (Darío Gradinetti) and bullfighter Lydia (Rosario Flores) - they meet when he comes to interview her and, accompanying her home at night, is forced to kill a stray rattlesnake in her kitchen. She is phobic of snakes and decides to abandon the home altogether. Marco helps her - offering to raid her home of things she needs, driving her to the hotel, and so on - and eventually they get together. 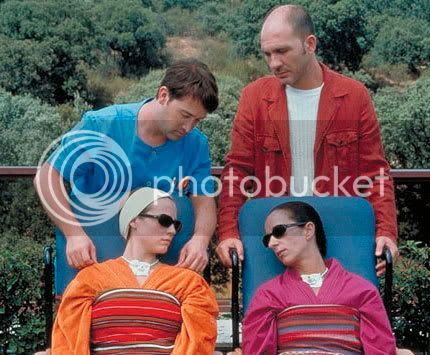 The second couple - if you can call them that - is male nurse Benigno (Javier Cámara) and his comatose patient, Alicia (Leonor Watling). If that sounds creepy, just wait - it gets creepier. Benigno, a friendless thirty-year-old virgin and social recluse, has obsessed over Alicia for years - even before the accident, he used to watch her in the dance studio across from his parent's apartment. When Alicia is in a car accident and rendered comatose, Benigno is only too thrilled to become her round-the-clock caretaker. After four years in a coma, Benigno is now unreservedly in love with her - he talks to her endlessly, does the things that she used to like to do (such as watch silent films and dance recitals) and plans their life together.

Meanwhile, tragedy strikes the first couple - Lydia is gored by one of the bulls, and her cerebral cortex is destroyed. Now also indefinitely comatose, she is taken to the hospital where Benigno cares for Alicia. There, Benigno - starved for more talkative company - immediately poaches Marco for friendship. Marco, simultaneously repulsed and curiously charmed by Benigno, spends many weeks waiting by Lydia and Alicia's sides, being lectured by Benigno on what makes women happy: you have to talk to them, be thoughtful sometimes, show you're listening and you care.

This all seems very cute, if weird, until things take a really weird turn. You'll have to watch it to find out (and don't let the kids around!). 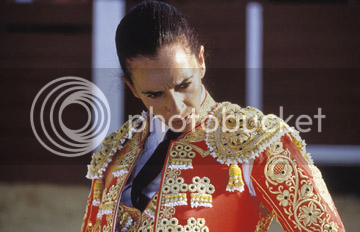 The most interesting stuff in Almodóvar films are his gender relations: often his protagonists are female, and his films are typically about the female experience. According to the Wikipedia article about him, he has said that women make better characters as they "are more spectacular as dramatic subjects, they have a greater range of registers, etc." In this film, the two male protagonists exhibit traditionally "feminine" characteristics, since Benigno is a nurse and Marco is moved to tears by just hearing delicate Caetano Veloso songs (admittedly, that is da bomb of a Caetano Veloso song). Meanwhile, Lydia works in a male-dominated sport - bullfighting - which also has heavy symbolism of virility and masculinity (fighting massive bulls, hello!). In the film itself, there are several dialogues which address the male-female dynamic. For example, Alicia's old dance instructor (a surprise cameo by Geraldine Chaplin, daughter of Charlie) excitedly describes a new interpretive dance she's choreographed, entitled "Trenches". The dance is about the First World War, and she has planned to show the soldier's souls floating up to heaven via ballerinas emerging from the male dancers: because, as she describes, the female emerges from the male, the male becomes female. The Wikipedia articles notes that this is then reflected directly in the story (though warning for spoilers!). 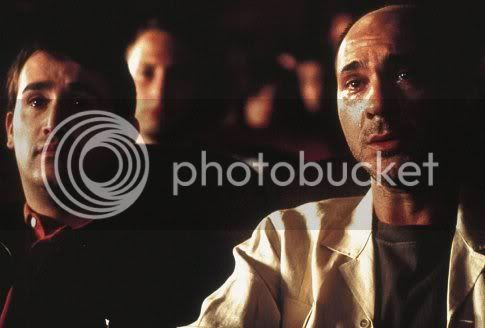 Benigno and Marco (in a moment of characteristic tearfulness).

The filmmaking in terms of editing, style and cinematography is lovely - and it is distinctly characteristic of Almodóvar's other work (e.g. Volver). The palette is suffused with bright, warm reds - the entire bullfighting spectacle, for example, or Benigno's dream bedroom - and there are some quirky details, such as the title cards announcing a relationship, or the notorious silent film-within-a-film sequence. Javier Cámara gives the most memorable performance as the increasingly creepy, increasingly vulnerable and increasingly unbalanced Benigno. He's saddled with the near-impossible task of maintaining Benigno as a sympathetic character for the audience and, generally, while he doesn't totally succeed (we were too freaked out!), it is a very compelling, even at times powerful performance.

This won't be a film for everyone's tastes - the story's outrageous twists make sure of that - and we have to caution that it fully deserves its R-rating for the troubling themes it discusses, but it is nonetheless a very good film: strangely whimsical, provocative and entirely unique.

Posted by a ppcc representative at 01:08

Hmm, I'll have to get this one! I have "Volver" and "All About My Mother" but, as you said, this one sounds really different-

Interesting tidbit on why Almovodar chooses women mainly as his central characters. I always wondered about that.

I skipped the rest of the post after you warned of spoilers because I'm totally going to watch!:) You make it sound so deliciously eccentric!

I really really like Almodovar and even though parts of this movie are really uncomfortable, there are also some absolutely beautiful bits (the dance in the beginning, for example)
Didn't you want to get to know more about Lydia? Almodovar often takes a throwaway idea in one of his movies and fashions an entire new movie out of it and I hope he tells us her story sometime!

As a fan of Almodovar, I can't say this is a fave of mine (although I like A LOT) in comparison to his other films (not because of the subject matter though since my fave is Atta Mé)

I thought it didn't flow as well his other films. Having said that I was often moved to tears.

There are no spoilers in the review by the way, maybe they are only in you click the links.

I think I enjoyed reading this more than I actually enjoyed watching the movie. The movie itself wasn't offputting really, it was just that I was trying to put everything together while I was watching it and I kind of forgot to enjoy the movie. Oh well. Can't all be winners.

Nida - If you liked Volver, you'll LOVE this! At least, I do! And don't worry - no spoilers in the review, just in the Wikipedia link.

Gauri - Couldn't agree more! Lydia was such an intriguing character, and bullfighting is so compelling to watch (though I feel v guilty saying that).

eliza bennet - Now I have to see Atta Mé!

Amrita - I think that happened to me the first time I saw this, in the theaters. The jumps between past and present, and couple to couple, can feel quite discrete at times - though, on second viewing, it flowed better, I thought.