Ram-Avtar starts out very strong, with a fun, quirky vibe, drunken "tapori bastard" antics and some "Aww!"-inducing bromantics. But then, at around the halfway mark, the film starts to rot away like that perfect papaya you left on the counter for too long. With each passing scene, it rots and rots, eventually crumbling into a lesser copy of the already trying Sangam. Dude, we've already seen this film, and it was such a drag. 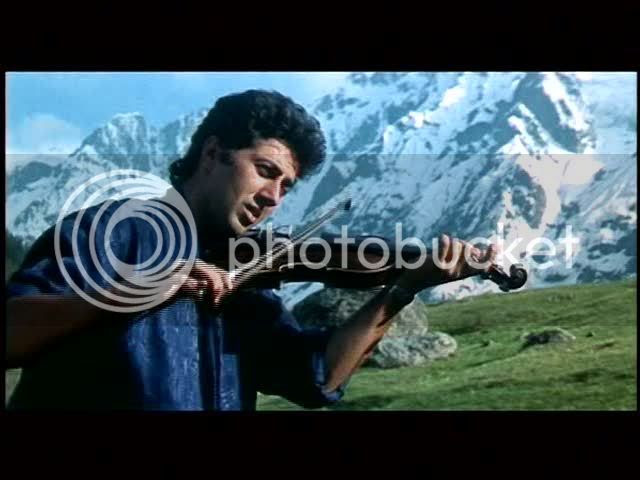 Ram (Sunny Deol). This scene awakened an intense craving in us for some Sound of Music action. Expect that from your local PPCC soon. 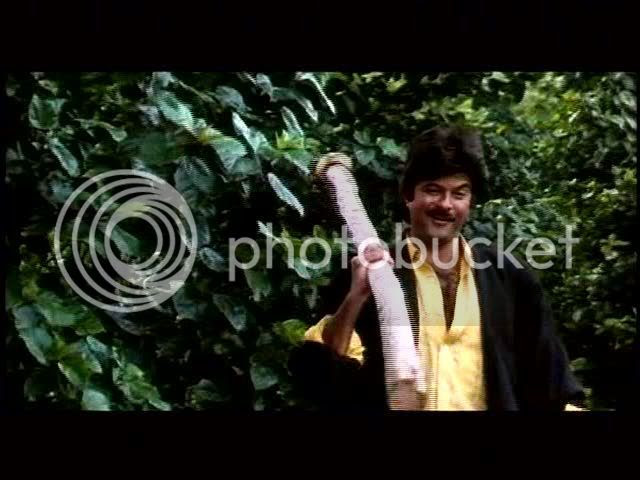 Avtar (Anil Kapoor)! This scene awakened an intense craving in us for... well, more Anil Kapoor action. Expect that from your local PPCC soon. Okay, you probably already do.

The strong opening: businesslady Sangeeta (Sridevi) lives in a village near Srinagar and keeps getting hassled by the wicked Gundappaswami (Shakti Kapoor, in heavy "South Indian" makeup) and his "Seven Bald Men" gang (yes, really). To fight them off, Sangeeta hires her own muscle: a silly, drunken cartoon named Avtar (Anil Kapoor). In a grand entrance reminiscent of Anil Kapoor's introduction in Ram Lakhan, or even Toshiro Mifune's introduction in any number of Toshiro Mifune movies, Avtar is thrown from the bus in the middle of town square, dead drunk. As the goons encircle and harass a pair of poor villagers, the tension rises, the noon sun burns quietly, and suddenly, at the nagging of a rooster, Avtar rouses himself to ass-kicking effect. "Khalaaaas!"

Now who doesn't love an ass-kicking tapori with a heart of gold? Uh, NO ONE. So after this single bombastic entrance, the entire, grateful population of the village (and the PPCC) falls in love with Avtar, and he meanwhile falls in love with Sangeeta. But it's clear that Sangeeta, for however endearingly scruffy she might find him, is not interested.

Enter the hunky, squeaky-clean Ram (Sunny Deol), Avtar's childhood friend. Ram and Sangeeta bump into each other a few times, and while Ram is smitten, Sangeeta's not really interested... that is, until he saves her from a Rohypnol-wielding Italian stereotype (!) Marconi (Manik Irani). Then, grateful, she falls for him. (Gratitude and love are really the dominant feelings here.) 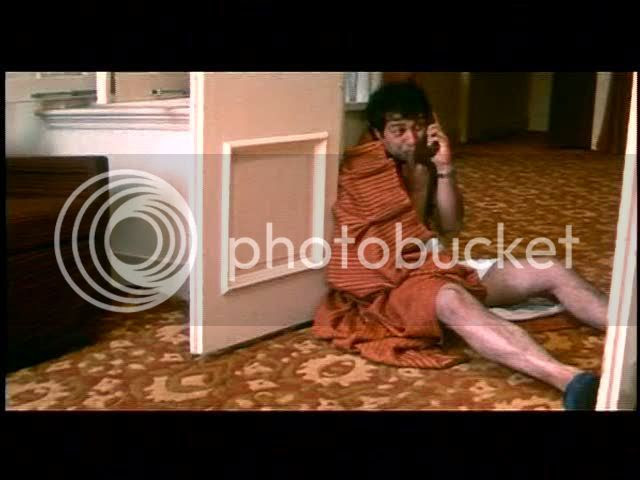 The boys have a lot of funnily effeminate moments, such as when Ram wraps himself in a shower curtain of cuddliness. Or Avtar squees because of his new suit. 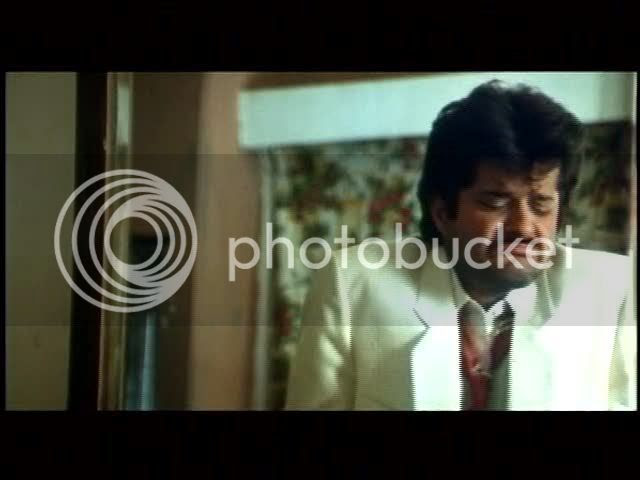 And then starts mugging in the mirror and pulls the French face fart the Italian shrug! Oh, bless.

Yet while Ram and Sangeeta's relationship soars into the usual Himalayan heights, Avtar is getting similarly swept away by his growing crush for Sangeeta. Eventually, both boys approach her father for marriage arrangements on the same day, at the same time, and when one of them figures everything out - in this case, Ram - the rest of the film progresses much as you would expect: it turns into Sangam, with Ram and Sangeeta quietly suffering as they protect the increasingly fragile Avtar from the cold, hard reality that... OMG! They had feelings for each other! But Avtar would be so sad and lonely if they just told him! Clearly that means someone has to get out of the way... BY KILLING THEMSELVES.

Sigh. If you know old Hindi films, you know several things in filmi love triangles are certain: no one JUST SAYS IT, no one can apparently cope with break-up, marriages are sacrosanct and an unhappy, shambolic marriage is better than a divorce (even if a divorce would make everyone concerned happier), "love is just a feeling that happens, marriage is a fact" (Sangeeta's words!), and love triangles are deadly. By the end of the film, when the three characters were wrestling each other over who gets to commit suicide first, the PPCC couldn't help but laugh. Filmi morality can get so contorted at times. Goodness, yes, breaking up is hard to do (and hard for audiences to accept, apparently), but, gosh, when it's a question of triple suicide and breaking up... come on, people!

It's interesting, though, isn't it? So many Hindi films are moral fables which propagate cultural norms (sometimes effectively, sometimes ineffectively) and it's always striking to see films martyr their characters in the name of ideals. In this case, marriage is shown to outvalue human life. And, unsurprisingly, it's the woman who preserves the cultural norm: as in Woh 7 Din, even though she is unhappy in her marriage, Sangeeta does everything she can to preserve it. 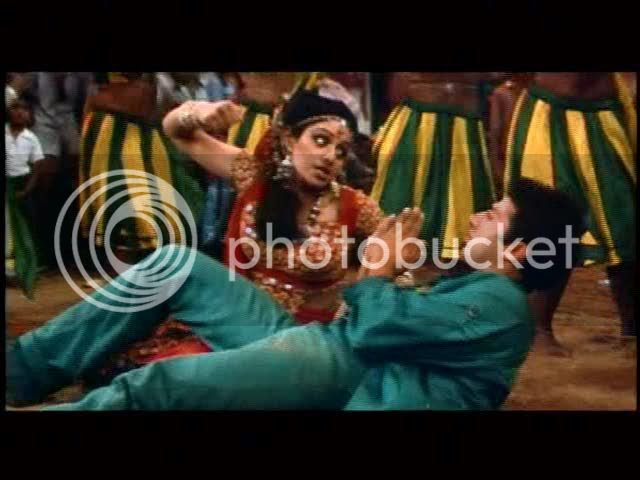 Who loves each other more? Him and her? 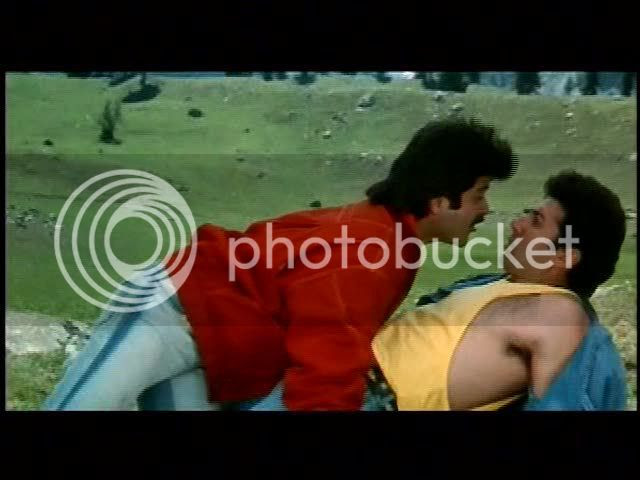 Or him and him? We rest our case.

We at the PPCC were just bewildered that this film decided to go the Sangam way at all. The beginning was so breezy! It was Salaakhen-style charm: fun fluff, a tongue-in-cheek vibe, everyone in visible good humor. When Ram realizes that he and his best friend love the same girl, and Anil Kapoor pulls a face of such heartbreaking vulnerability, we thought, "Awww, the poor dear! Now they better not undermine this by playing it for laughs." Little did we know they would swing the entire narrative to the other side and play it for maximum melodrama! Sigh.

It's like the film was suddenly wrestled away from the original director. Similarly, the performances, which were bright-eyed, bushy-tailed and sweetly ridiculous in the first half, suddenly came clunking down into dead-eyed moral pontificating. There was some fun in watching Anil have his trademark scene of meltdown (now in Johnny Walker Black Label variety), but even that couldn't rouse us from the stupor of boredom the second half provoked. 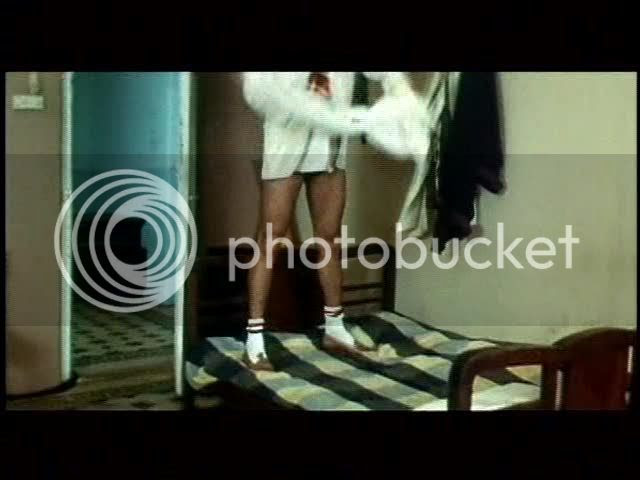 So we'll use this opportunity to note the best physical asset of Anil Kapoor: his surprisingly shapely, muscular legs! Wow! Has he been blessed by the squat god or what?!

In site news, check out our newest fiddly widget below this review: the REACTIONS buttons! For those readers too lazy/shy to comment, now you can have your feelings articulated at the CLICK OF A BUTTON. OMG SQUEEEEEE!
Posted by a ppcc representative at 23:45

2) Love Anil's squee! Squee pops up in Bollywood a lot - isn't it handy we have a word for it now?

3) Marriage is more important than life itself...god, am I going to have to go off myself because I'm single at 34?

Oh and ALSO - what do you think of Sunny Deol? I am quite puzzled by his stardom.

Damn! those are decent quads. i thought it was deol - but our man seems to pack some real heft. great catch ppcc.

Beth - SQUEE is what I do a lot, but pretend I don't. And OMG, you're right - singletons are doomed! I suggest we marry (but the children must keep my name, e.g. "Anil Cinema Club").

Beth2 - I can take him or leave him as a performer. I haven't seen that much of him - only Darr (which is renowned for destroying him as a hero) and this (where he was cute enough) - so will reserve judgment for now. He's the Deol I'm least interested in though - I find Bobby much cuter (squish!) and Abhay much more interesting (what a hipster!). That said, I saw Sunny and Bobby Deol on a Koffee With Karan episode once and was really charmed by Sunny, who was this mega-shy gentle giant. Cute!

Khoofi - Welcome! I think I noticed Anil's super-legs in Mashaal first. He needs to not wear pants all the time!

oooooh, will the PPCC pleeeeeease post on The Sound of Music soon? Pretty pretty please? In addition to being a HUGE part of my childhood, I kind of consider it a Bollywood gateway drug/Hindi movie compatibility indicator. Would LOVE to hear what the PPCC has to say about Maria and the Captain and all those children.

Good review but I sadly realised (after watching Nayak) that my weird Anil problem is ongoing and planning to return to films starring him in distant future.

Works for me! You can just have the kids - I don't want them, but that's just as well because I'm an atheist and would be unable to impart them any values and they would grow up to be alcoholics, thieves, or whores (or all three). I can be the doting, dottery old auntie down the road who helps them with homework and takes them to the fair, but they must NEVER KNOW MY TRUE IDENTITY.

I have a soft spot for Sunny Deol that is totally unsupported by his actual work. He seems so nice and earnest.

"Squee" is one of the top ten handiest words of...ever.

And PS again, I agree with Heqit that TSoM is v Bolly appropriate and really, really fantastic. I have recently met someone who has NEVER SEEN IT and I keep yelling at him that he must.