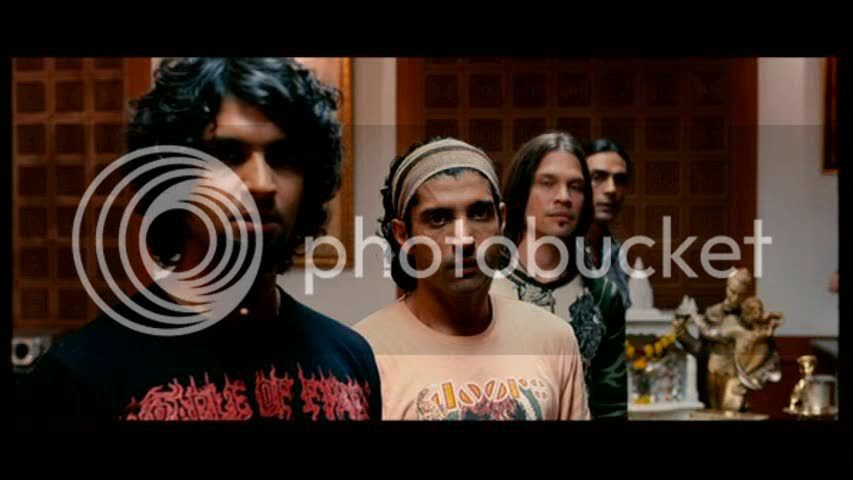 The much-acclaimed Rock On!! is a pretty bauble of a film, entirely masala-free and resembling other Hindi films only in the language the characters (occasionally) use. It offers an all-too-rare glimpse into the Indian indie music scene - that cultural underdog so often overshadowed by the filmi tyranny. However the film's dedication to a specifically Western cultural legacy - there are nods to The Doors, The Who, The Rolling Stones and so forth - means that the good ol' Hindustaniness gets left behind. For this reason, this is a great film to show your non-filmi Bollywood virginal friends, as these angst-filled rockers are easy to identify with from a Western perspective (and there's none of that pesky song-and-dance stuff). Yet it's also true that we don't watch Hindi films for movies like Rock On!!.

There once was a band named Magik. On vocals was the studly Aditya (Farhan Akhtar, son of Javed), a bit of a prima donna with Italian soccer star hair. On lead guitar: Joe (Arjun Rampal), whose quiet studliness hides an occasionally violent temper. On keyboard: the peace-making Rob (Luke Kenny). And finally on drums, the Puckish goofball, K.D. (Purab Kohli). After a quick opening number, we fast-forward ten years to find the four bandmates adrift in their separate lives, older, seriouser, sadder. Aditya has become an investment banker/emotional zombie, Joe is an unemployed sadsack, Rob is doing reasonably well under the patronage of filmi music director Anu Malik (for realz!) and K.D. is just not getting anywhere with the ladies. 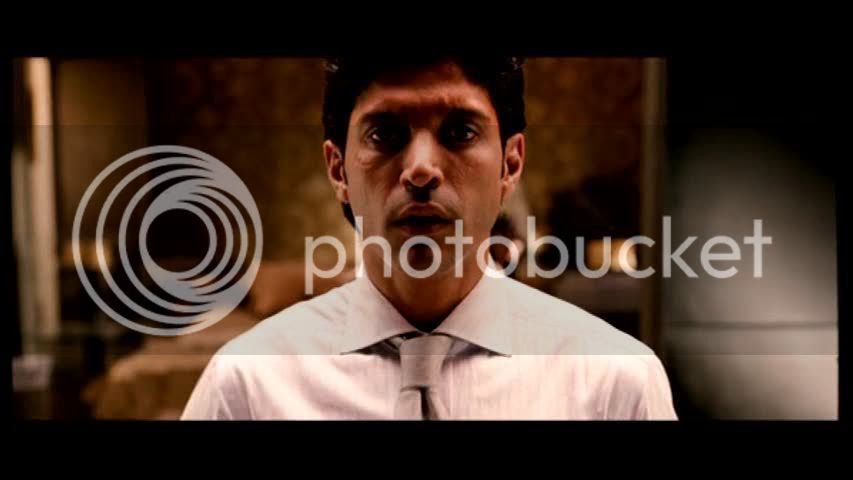 Aditya (Farhan Akhtar) has become a beige DRONE. Or should we say just another brick in the wall?! Nyuk nyuk nyuk...

Aditya's wife, Sakshi (Prachi Desai), finally gets tired of living with a zombie and, via a chance finding of Aditya's secret "band memory box" in the attic, she works to reunite the four boys in the hope that this will reignite Aditya's lost joie de vivre. As this plays out, we are treated to interlinking flashbacks which show us how the band broke up and why.

Farhan Akhtar, the well-regarded director of Dil Chahta Hai, makes his acting debut in this film - and he seems to be turning into an auteur for movies which directly address the dreaded quarter-life crisis through the lens of bourgeois hipster twenty- and thirtysomethings. Dil Chahta Hai was a smash hit since it touched a chord with the growing yuppie class in India, and Rock On!! follows much in that vein. The characters here are all relatively privileged, well-off individuals who live in swanky pads and dress in designer clothes. The only character who seems at all concerned about money is the slightly more middle-class Joe who, interestingly, is portrayed as a Goan Christian and therefore exhibits some characteristically Goan hippie trendiness. We say "interestingly" because more typically, in a masala film, poverty or middle-classness comes with a whole host of conservative norms, usually going hand-in-hand with Hinduism or, more rarely, Islam. Given that Christians are often seen as pretty fly cats in Hindi films - see Amitabh's boisterous Anthony Gonsalves in Amar Akbar Anthony or SRK's wacky parties in Kabhi Haan Kabhi Naa - this gives Joe the liberty to, well, be a dreamy-eyed rock star rather than an angry young tapori. 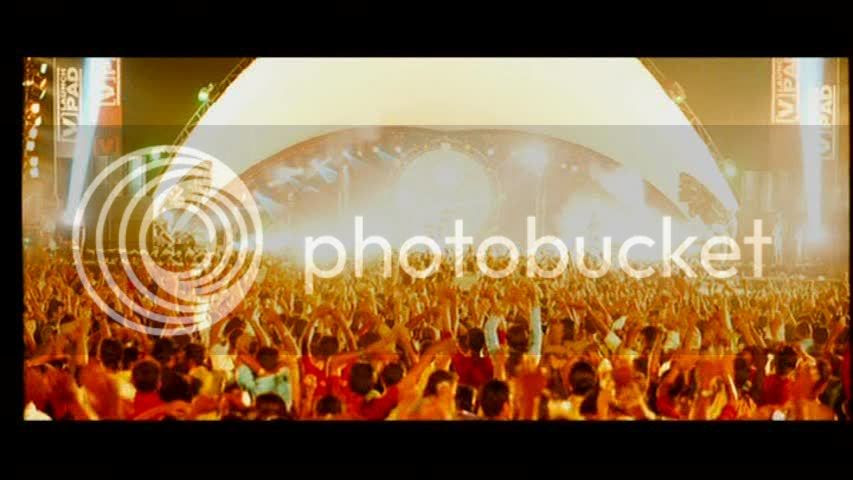 And God said, LET THERE BE A TOTALLY KICKASS POWER CHORD! 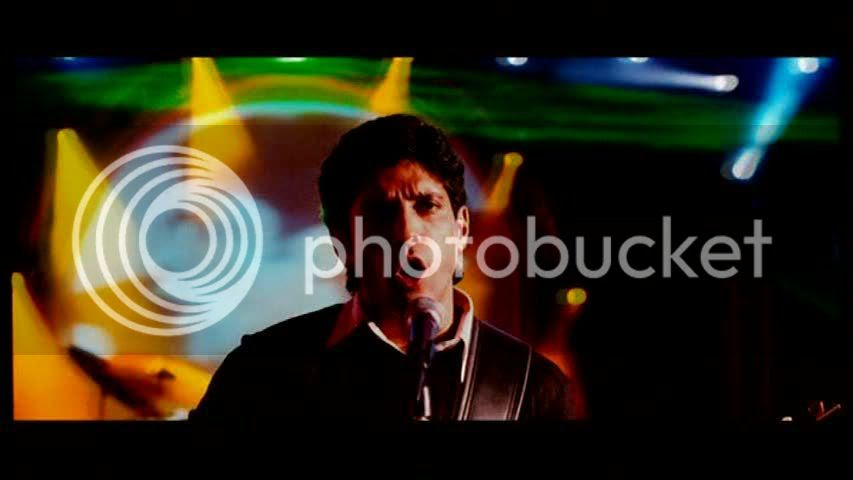 The best scene and the only one that lived up to its promise was the final concert. When Farhan Akhtar hit those falsetto notes (which, btw, he's a triple threat: actor, singer, director!), and with all those streaming colors, we had Radiohead at Glastonbury flashbacks. Joy...

All this means that this'll be a great film to show your Bollywood virginal friends, as it's no different from a Hollywood film. The aesthetics - bright colors, slap-dash camera angles, inventive editing and heart-meltingly gorgeous focal depth - resemble the energy and youthfulness of a tamer Danny Boyle (ironically!). There's even the presence of the mystical Hipster Color Combo - blue and orange - found in hipster movies and hipster books! Eerie, man. 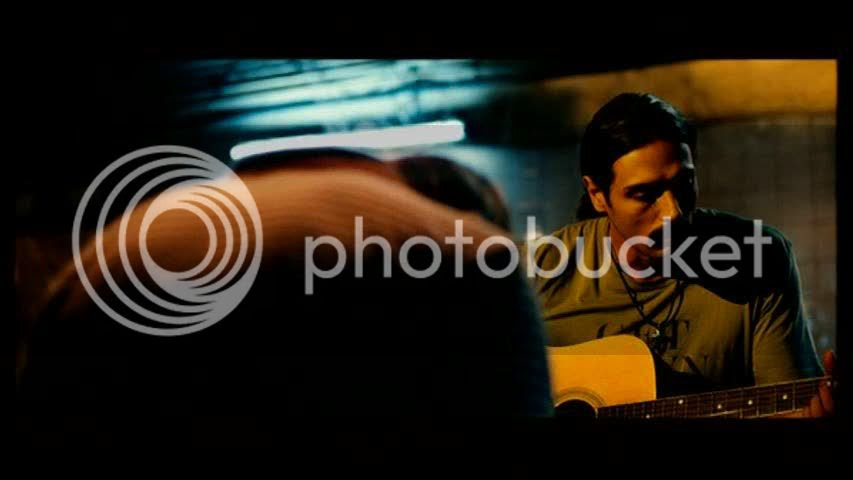 GASP! Blue and orange! The official colors of our people!

The only problem is that these hipsters may come from the Planet Cool, but they seem to have forgotten their Hindustani heart. The only times when Hindi music is even considered as a possibility, it's presented as the very antithesis of rock, and it's either shown to be soul-deadening (Rob's work with Anu Malik), worthy of ridicule (the band's Dandiya concert), or tongue-in-cheek cutesie (Sakshi's karaoke moment).

Yes, we feel a little silly saying this, as we constantly criticize the overwrought nationalism of other, more jingoistic Hindi films, but we really missed Indian culture in this film. The characters lived in a bubble of globalized, heavily Western-influenced luxury, completely detached from the realities present in the usual Hindi film: familial demands (the guilt trip!), institutional corruption, poverty, the often-constrictive dharma. So while Rock On!! should be pretty enjoyable to a Bollywood novice, it won't be particularly enlightening. (For this reason, we're much more looking forward to Farhan Akhtar's upcoming Luck By Chance, which satirizes the Hindi film industry with the same knowing, angst-filled hipster aesthetic.) 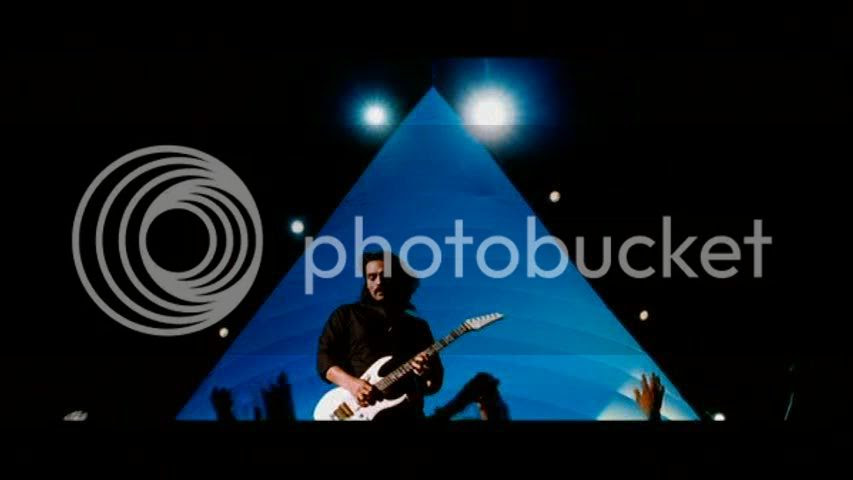 So when's this coming out on Guitar Hero?! And look: Pink Floydy triangles!

Don't get us wrong. The PPCC is all about cross-cultural fertilization and the glories of fusion. Jhoom Barabar Jhoom is a good example of a film that manages to take Western and Indian aesthetics and create a quirky, lively, fresh hybrid. Heck, even the outrageous tackiness of Tashan merits praise for forging brave, new paths of fusion fashion. Rock On!!, for however pretty it is, often comes across as a mediocre mimicry: we weren't impressed by the songs, which sounded like uninspired and recycled pop (except for the outstanding Tum Ho To with the Baba O'Rily-esque ending), and the costume design was metrosexual but standard.

That said, we can see how Rock On!! is a necessary breath of fresh air to Hindi commercial cinema. While it doesn't seem very relevant except to trendy hipsters thick in their quarter-life crises (PPCC bell goes CLANG!), and it doesn't have much to Say, it does attempt to introduce the indie culture into films and that is a worthy target indeed. Today's grade is a B-.

LOL!! Nicely done again. The only thing about the movie for me was that it was "not bad"!! Could not understand what all that hype was about. And my plight is exactly the same as the wife..I do not know or connect to anything else other than Hindi (mostly Film) songs...so the music seemed rather ordinary as well. And I could not really understand what was it that stopped them from pursuing music..that fight has to be the lamest excuse ever! Performances were pretty decent though. they kept you hooked on. Especially the ladies. Srinivas

Wow! You had a much different take on this than I did. Being a veteran of the indie rock band scene, I really identified with the boys of Magik - band dynamics are really like that!! As a rock film, I think Rock On really succeeds. Maybe Rock On is to me as Jaane Tu Ya Jaane Na was to you... the story really resonated with me.

I mostly want to watch it for Arjun's gorgeousness :)

I am so glad to know I'm not the only one to be unmoved by this. To be fair, I've only seen about 40min of the film, but the designer yuppies, the Rock music (like Srinivas I prefer normal fimi music) and Farhan's poetry recitals (thats what his "singing" sounds like, to me!) were sooooo un-engaging that I just couldnt bring myself to see the rest of it. And yes, I am waiting for Luck By Chance, too! :-)

Anarchivist - I think those are our official colors on Tuesdays.

Srinivas - 100% agree with you! I reckon I could connect with rock - I do, after all, very much enjoy The Who, The Doors and The Rolling Stones, all bands these boys apparently like to - but the music was felt so blah and mainstream. Where was the rock spirit? Ah well.

Filmi Girl - Yeah, I realize I just made the exact same criticism you made about JTYJN, and I'm trying to pinpoint why I liked that and not this... I don't know! I didn't dislike this, I can just take it or leave it. Thinking about it, I guess I couldn't connect with the story - privileged people ennui (or, as the character in the film I just watched says, "The problems of people who don't have problems.") is a bit toxic for me. Adi just came across as immature and overdramatic in making such a big deal of the band/hiding it from his wife/etc.

Memsaab - He IS so pretty.

I guess I connected with Adi to the extent that I had to give up rocking out to get a 'real' job and I suppose I still resent that on a certain level. And the band dynamics really hit home - the idea of one member getting more attention; the idea of "selling out"; and poor sympathetic daydreamy Joe's refusal (or inability) to do anything 'commercial.'

JTYJN, on the other hand, really smacked me in the face with it's pointlessness and middle class ennui and all the reasons I no longer watch much mainstream Hollywood stuff. (Plus Genelia's character really annoyed me. I loathe manic pixie dream girls.)

I have yet to see this, but I own it...there's just too much to watch!

Great review, I really feel you on the lack of Indian culture, but think I'll probably enjoy it anyways. I mean, for one, look at all the cutie pies (Farhan and Arjun)!

Remember that old Mad TV skit parodying 90210 and maybe Dawson's Creek called "Pretty White Kids with Problems"? That's coming to mind. But I'm totally going to see it because Filmi Girl sold me (and I agree with her about manic pixie dream girls EW EW EW).

V v interesting re: blue and orange (and v appropriate here on blogger) - despite them being the colors of my workplace/alma mater, what that combo brings to mind most for me is Varanasi, where I felt like most everything I saw was glowy orange and/or hazy blue, whether night or day or on the water or in the streets or whatever.

This seems like a good time for me to plug my fave way to hear new indie mostly US rock: kexp.org out of Seattle. Although there is a world music show that I've heard new Indian music on too, on Tuesdays....
Great mix of indie through the ages-- Radiohead is a staple! Along with Pixies, Dinosaur Jr, LCD Soundsystem, MIA, etc -- they are playing the hell out of the Slumdog soundtrack now. John Richards, Cheryl Waters, and DJ el Toro are my go tos. Check it out on line.

Filmi Girl - Yeah, they def touched on a lot of issues in a good way - and I liked the way the story was told: often unembellished, telling details, etc. I think what I liked about JTYJN, which RO lacked, was that sort of whimsical, tongue-in-cheek vibe: e.g. Naseer in the portrait, the white horse finale. But yeah - if you can't stand the manic pixie charmer, then that throws JTYJN out!

Nida - Yes, the cutie pies are indeed scrumptious! Let us know what you think when you see it!

Beth - Heeee, the skit! Beth, you are a hipster - of course the color combo is significant to yoooooou!