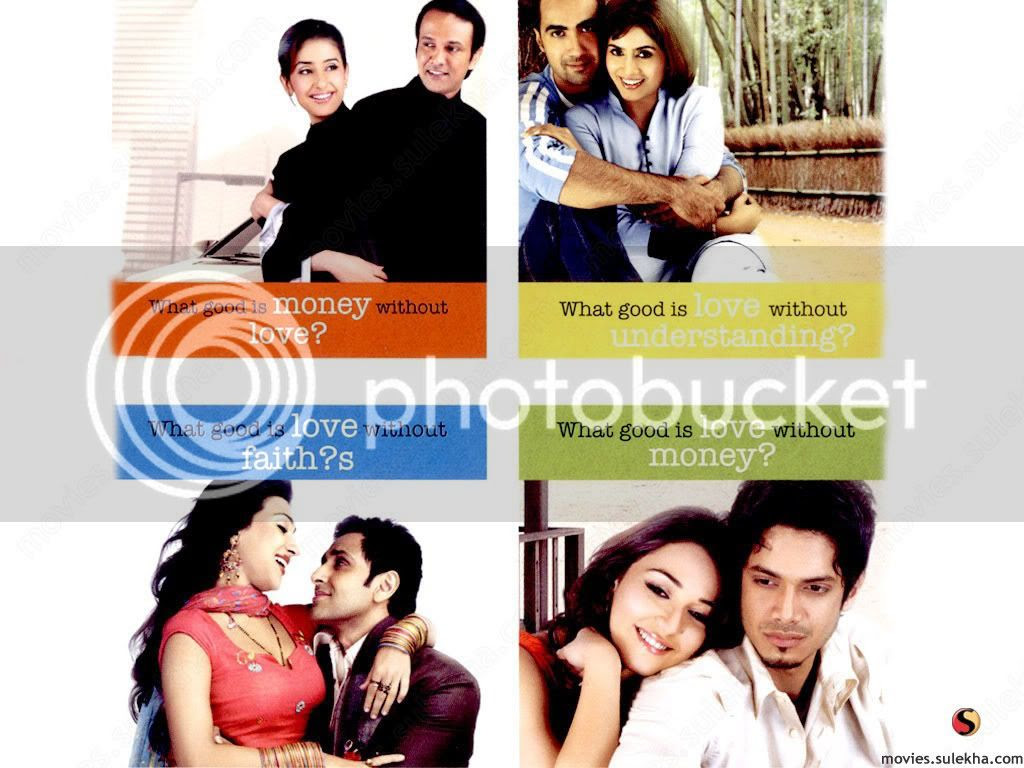 The excellent premise of Sirf - the idea that, as the Zutons say, everyone's got problems, everyone's got stress - is unfortunately quickly ruined by behavior so unrealistic we wondered if these people even CAME FROM THIS PLANET.

But, alas, what little fun we had reinterpreting Sirf as a sci-fi odyssey didn't compensate for the spork-inducing ridiculousness of this movie. This is a damn shame. The set-up is fantastic: welcome to big, bad Mumbai! And meet four couples, each facing their own believable problems and each comprising two vulnerable, imperfect individuals. First, there's the puppy love couple (Ankur Khanna and Nauheed Cyrusi), anxious to get married and set up their perfect home. Next, there's the working class couple (Ranvir Shorey and Sonali Kulkarni) with the seriously ill daughter, trying (and generally failing) to juggle hectic work schedules with quality home time. After them, the newlyweds (Parvin Dabas and Rituparna Sengupta) encountering city-versus-country cultural tensions (she copes about as well as cheese copes with vanilla ice cream). And finally, the wealthy, middle-aged couple (Manisha Koirala and Kay Kay Menon) who flirt with adultery, workaholism and suspicions.

Basically, the plot's originality and initial appeal (for us) was in the first two couples: the experience of the young couple who just gets excited shopping at Ikea together is rarely seen in film, and it was engaging and cute. The husband-wife dynamic between the working class couple was also well-done and believable. Once we got into the two more cliché couples - the culture clash couple and the middle-aged bored couple - things took a telenovela turn, complete with melodramatic lines such as: "He was out eating paani puri with that witch!" Ay Dios mio! Es todo muy ridicolo.

The similarities between this and other "humanity quilt" films is notable. As with the other films in this genre, we follow a large number of seemingly only tangentially-related couples through their personal turmoils which become more and more entangled. If you'll allow us to be glib, Sirf's role in this long, illustrious line of quilts can be summarized as follows:

An interesting idea! Indeed, the four stories are linked by one character admiring the next couple and literally thinking, "God, I wish I was like them..." We then get to follow that envied character to their own very imperfect home life. It seems everyone's pretty far from domestic Elysium!

Is Kay Kay Menon crying because he lost his mobile?

Yet what ruins this film is the outrageous behaviors and a script which strains credulity. For example, when the film wants to show us the culture shock the naive country wife gets when she attends her new husband's birthday party, it does this by having the husband's birthday cake shaped like a pair of breasts. All the "city people" laugh and jest about this but the PPCC couldn't help but think: Who ARE these people!? Does anyone actually buy boob cakes? Even jokingly? What is he turning, twelve?! Or what about the parents who talk with their doctor about their eight-year-old daughter's chances of surviving a risky surgery... in front of the daughter. (?!!) And that same doctor who, when tragedy strikes, goes, "Well, I told you so!" WTF?!

And then - icing on the boob alien people cake - just listen to this:

It's a good thing the PPCC was sitting down for that one, otherwise we would have had a Ranvir Shorey-esque collapse of pure SHOCK.

Which segues nicely into the performances, which were uniformly strong. At least, all these talented actors - Manisha, Kay Kay, Ranvir - were clearly trying very hard with the material they had. Kay Kay Menon's elation and despair in the scene we described above was well-done, as were moments when we saw Manisha's weary hurt at being ignored. We look forward to seeing more from the young 'uns, Ankur Khanna and Nauheed Cyrusi. If we had been more invested in Ranvir's storyline, we probably would have cried in the end, rather than just admiring his technical ability in a cold, hard shell-of-a-PPCC way. The most uneven couple were Parvin Dabas and Rituparna Sengupta. Their story, which began earnestly, slowly devolved into straight dramedy TV serial-style acting: Rituparna Sengupta seemed to morph into someone fresh off the saas-bahu drama set, while Parvin Dabas became the bumbling, put-upon husband. ¿Por qué, filmmaker, por quééééééé? (Side note but Parvin Dabas, who we last saw in Monsoon Wedding, was a revelation: that man was like a cross between Abhishek Bachchan and Shashi Kapoor. Beth, get thee to his movies! ¡Andalé!)

Alas, we can't really recommend this one. The best part about this film was the complementary can of ice-cold Coca Cola that the DVDwallah gave us when we cleared his Ranvir Shorey stock.

Edited a few hours later, after baking a chocolate cake: Forgot something! A pleasant surprise in this film was the occasional use of Western classical which featured, in particular, our two favorites: Philip Glass (!!!) and pieces from Yann Tiersen's soundtrack for Amélie (including possibly J'Y Suis Jamias Alle or Pas Si Simple - anyway, one of the delightful accordion-heavy ones edited like two minutes later: NO! It was definitely Les Jours Tristes... okay, done now, for real). What a weird surprise! We've seen Western classical used in Hindi films before - Parinda and 1942: A Love Story - but never has it been with such TASTE. Yay Philip Glass! Yay Yann Tiersen!
Posted by a ppcc representative at 20:39

I need to see this movie- I have to see Manisha and kaykay together- I've never lost faith in her and he is just adorable :D

You're on a roll... Seems like everytime I sneeze, PPCC has a new review! And I'm still struggling to catch up.

This one sounds like an interesting love quilt, but after Salaam-e-Ishq I've decided that nothing can come close to the sheer awesomeness that was Love Actually - so I'm glad to know that I neednt even bother with this one.

By the way, is it just me or does someone else also see Ranvir Shorey as the crown prince of bechaaradom? He has this perpetual will-be-ditched-by-his-girlfriend-and-about-to-burst-into-tears look that fit perfectly in Aaja Nachle but is a bit out of place elsewhere.

After Salaam E Ishq I decided to give these type of film a break - when one starts to like Salman, it seems to me that there is something wrong with the rest of the cast!- but PPCC (as usual) managed to spark an interest.

There's no way I could sit through this--bad storytelling plus good performances still equals bad movie in my eyes. I appreciate you taking the time to warn me though! :-D

As a lad who moved from the country to the big city, I always appreciate when we country folk are, in movies, confronted by some mundane big city thing and react as if we've just traveled through time and space to some far-off future planet. You know, Crocodile Dundee had never seen a bidet, but he figured out what it was for pretty quickly.

My word verification: flartho. Now blogger is just getting obscene!

Shweta - Sigh, I have unfortunately lost faith in Manisha. Kay Kay was great, though - he made his Life in a Metro repeat much more sympathetic this time.

Bollyviewer - Alas, this is the worst of the love quilt movies. I am totally with you on Ranvir being the Ultimate Loser - especially after Mithya, he's got a great brand of playing the lovable low-life/loser, like he should have Tom Waits playing in the background all the time.

eliza bennet - Unless you really REALLY like Kay Kay Menon, I'd say give this one a skip.

ajnabi - I could barely stand it - some of those scenes were just too outrageous! And it was sad, since the actors are good and appeared dedicated to making it work. Oh well!

Keith - The BBC Love Bollywood boys made a good argument that Manisha was geared to be the next Meena Kumari/Tragedy Queen, but then it just all seemed to go off the rails. I'm sure if my urban person had been confronted with the boob cake, my reaction would have been similar to the country wife's ("Nahiiiiin!"). Or a flartho cake, for that matter.

Hurray for Yann Tiersen! I do hope it was credited.

Sanjay Leela Bhansali apparently appreciates Western soundtracks as well, because he used "A Certain Light" from The Portrait of a Lady in Hum Dil De Chuke Sanam, when Vanraj is drunk and yells Nandini's name (took me 3 months to figure that one out since I haven't seen Portrait); and I could've sworn I heard the Gladiator soundtrack during the train scene at the end of Devdas, possibly "The Might of Rome".

to the last post person - Sanjay Leela Bansali also had a straight lift of a Paul Anka song - "Bring the wine my lady bring the wine it is the time for love" in his earlier movie "Khamoshi" - Salman Khan sings the hindi plagiarised version in a Church.

Oh yes, people do buy boob-cakes. Even adults. Apparently, cakes shaped like assorted body parts are quite popular, especially in bachelor parties and the like. And I'm sure you understand that by "assorted", I'm not referring to the pancreas or the brain :-D

Parvin Dabas & Ranvir Shorey were also good in Khosla Ka Ghosla, and Parvin was a disappointment in Via Darjeeling (solid 1st half, 2nd half ruined it).

Good review though... and it's probably going to be a skip even though Kay Kay is in it (he's an amazing actor, no?).

Janeheiress - Alas, it wasn't! Which is a shame, because I recognized some other piano pieces in there but couldn't place them (Chopin? no idea). GASP!!! I think you're right about The Might of Rome in Devdas - at least, you've definitely stirred some brain cells on that one. Now I must revisit.

celluloidrant - OMG! Now THAT is an interesting cultural tidbit. I can understand a boob cake at a bachelor party, or as a joke, but at a regular old co-ed birthday party?! Gosh.

bwood-fan - I really liked Kay Kay in this, and thought he was FAAAB in Black Friday (and in this highly addictive song from Honeymoon Travels Pvt Ltd. Very keen on the other two recs as well!