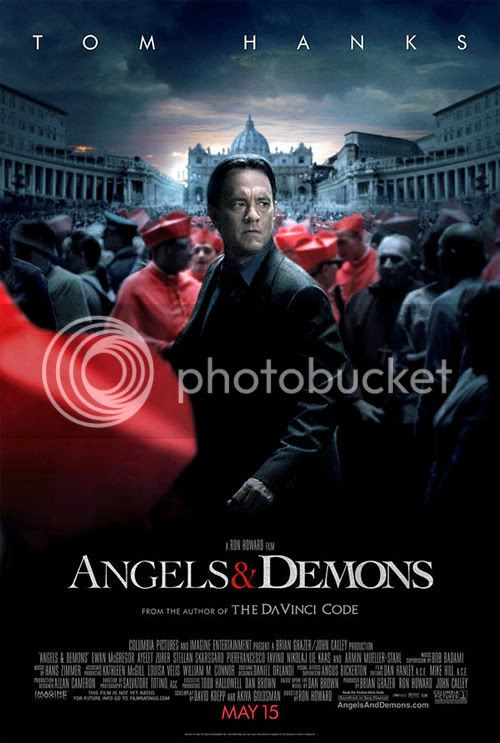 Oy with the Photoshop.

After seeing the trailer, we thought Angels & Demons might be stupid and fun. Halfway into the film, we worried that it might be dangerously, possibly even destructively stupid and definitely not fun. Finishing the film, we concluded that (1) yes, it was pretty stupid, but not dangerously so, and (2) it was not fun.

Usually trashy Vatican corruption stories are fun. At least, for us (insert heathen disclaimer). See, for example, the story of Pope Alexander VI and his illegitimate son, Cesare Borgia (who, by the way, was made a Cardinal at 18, led the Papal Armies and was Machievelli's inspiration for The Prince). We at the PPCC have a strong Italian component in our DNA, and this provokes a tendency in us to wallow in Renaissance history as (1) the height of good aesthetics and Italian culture, and (2) tabloid-style, Papal corruption. But we can't always party like it's 1492. And there comes a time - namely, today - when we have to admit that maybe it's over. The Holy See is just not the significant political force it used to be, with all the accompanying Machiavellian machinations that drive us social scientists wild. Sure, Catholics around the world by definition still look to the Pope for spiritual guidance. But, in a multicultural, globalized world where the Mediterranean is no longer a political and economic center, most non-Catholics don't really care what the Vatican says or does anymore. Similarly, Italy is more and more being described as "beautiful, but useless" by Italians in films and amongst our homies. Alas. The days of decadent power and significance are gone. 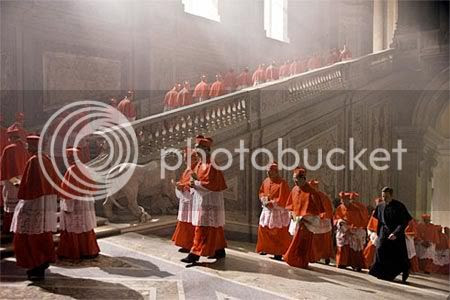 Exploring the remaining cultural artifacts and rituals, however, is still pretty interesting.

Angels & Demons, however, seems to refuse to accept this post-Renaissance, post-Vatican reality. It attempts to smoosh together cosmological significance and political provocativeness by constructing an elaborate "war" between science - represented by CERN's Large Hadron Collider in Switzerland - and religion - represented by the Vatican. (Umm, all you other scientists and people from different religions need not apply. These two representatives have got everyone covered.) Of course, the fact that in reality the CERN scientists probably don't care what the Vatican does, the Vatican doesn't care what the CERN people do, and most people don't care about either doesn't seem to figure. Instead, based on this increasingly flimsy premise, we're supposed to believe that:


(1) Dropping anti-matter can spark an explosion somewhere between an atomic one and the Big Bang. More towards Big Bang. (Uh... dammit, man, we're a blog, not a physicist, but huh?)
(2) Radical anti-Vatican science-fundamentalist revival groups are allegedly wreaking havoc in Rome in order to... actually, the plot lost us on this one. Why all the trouble again? It had something to do with avenging Galileo.
(3) The only way to stop the havoc and the mini-Big Bang 2.0 is through the cunning deployment of ace Harvard symbologist, Robert Langdon (an aging, but still lovable, Tom Hanks).

We would accept this, well, stupid premise on the agreement that we would be given either hotties or action in return. We did get some hotties - specifically, Italian actor Pierfrancesco Favini, Swedish actor Stellan Skarsgård (looking old too, but hotness relatively undiminished... especially in that trim, well-cut suit! v. flattering), and, most of all, Ewan McGregor channeling a sort of demented Obi-Wan Kenobi in a priest's suit. Looking v.v. good, Ewan! 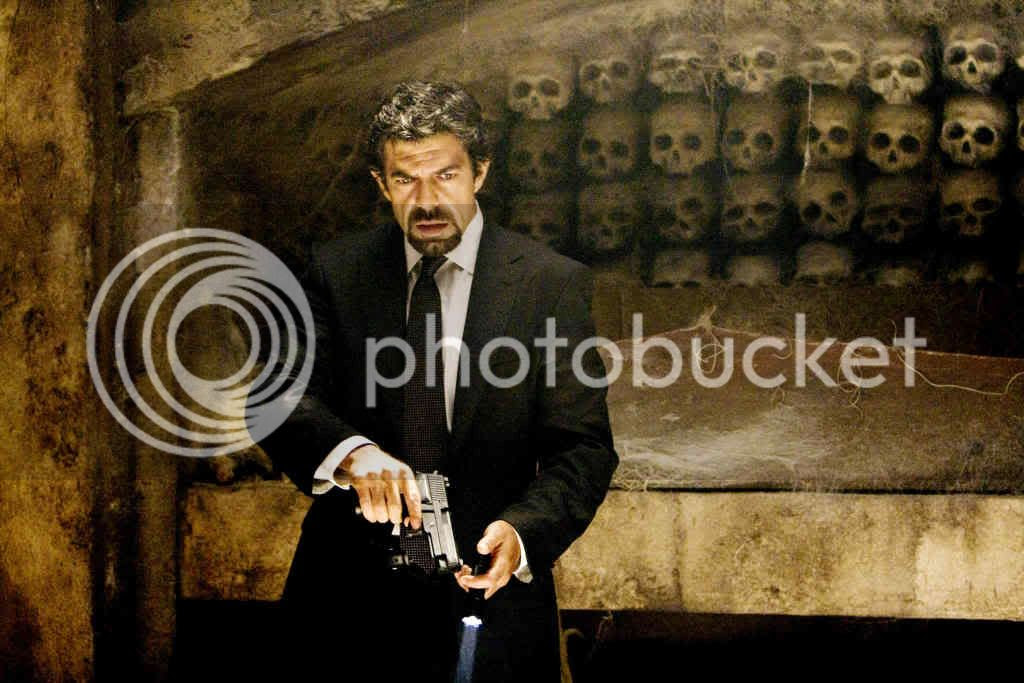 Hottie #1: Pierfrancesco Favini. He gets all of... ten lines. 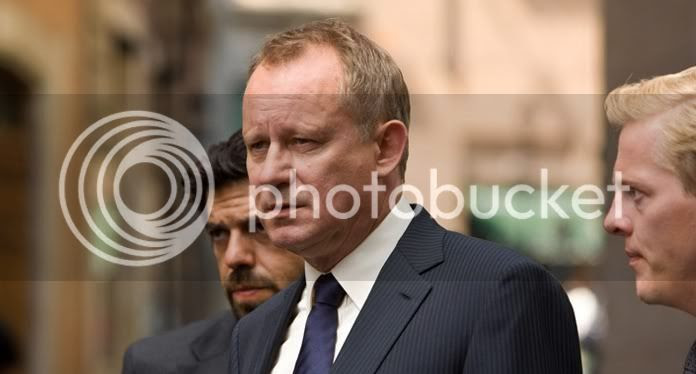 Hottie #2: Stellan Skarsgård. Are we alone on this one? Surely not. Well, maybe he's an alternative choice. 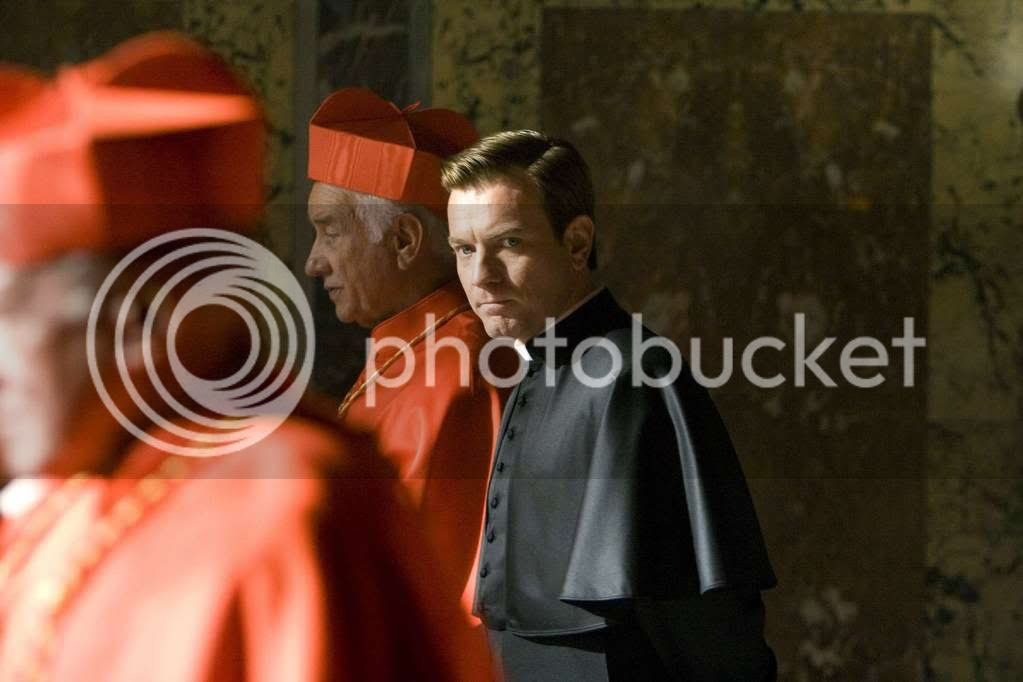 Okay, before this devolves into pure Bridget Jones, getting back on track: ... 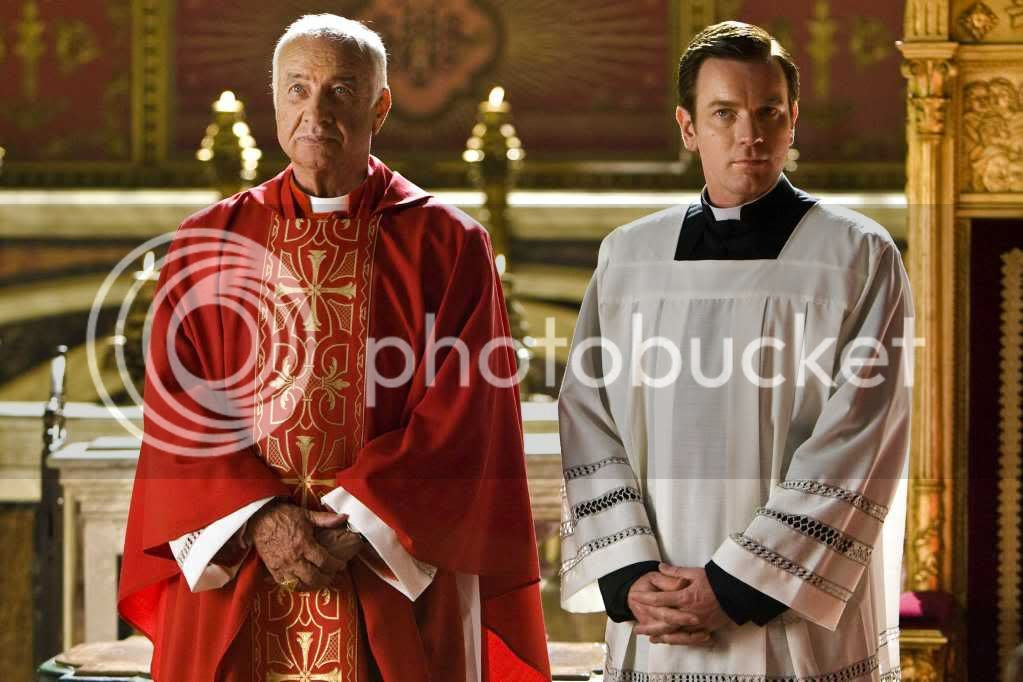 ANYway: we get some hotties, yes, as well as some token shots of our beloved Rome (but merely drops in the desert!), but instead of action, we just get blunt, gruesome carnage. This gratuitous, macabre focus on pushing the PG-13 bounds of what is acceptable mutilation to be seen onscreen left us feeling disgusted and upset. It was at this point - watching yet another detailed close-up of a corpse, while listening to ignorant ranting about "religion and science's ancient war" - that we worried about what it meant when trashy American films project such an apocalyptic, black-or-white, anti-rationalism, anti-compromise, ultra-violent mentality.

Thankfully, the day is saved and everyone agrees that everything was blown way out of proportion (no pun intended). We won't spoil it for you, but let's just say that Ewan factors prominently in fixing the situation and redeeming the film into more neutral (but still very trashy) waters for us. And no, it's not just because of that particularly way he bats his eyelashes, or because of that adorably fussy part in his hair. (Though that helps.)

Posted by a ppcc representative at 01:02

Having read the book(s) of Dan Brown, they don't translate well into films. He has a very easy, formulaic prose (all of his books are the same) that forces you to leave your brain out and able to hear the announcement at the airport while waiting (ok I'm guilty in not really paying attention to those when reading a good book)

Having made the mistake of watching Da Vinci Code, I stayed away from this one but will not change the channel if it comes on TV (mainly for some Ewan viewing)

I understand Ewan is Camerlengo right?

Sadly even that isn't enough to induce me to watch this movie. Any Pierfrancesco Favini recs though?

eliza bennet - Yep, Ewan = the studly, righteous Camerlengo OF DOOM. I def dub this a TV watchable film. Not terrible, but don't go out of your way for it.

Pierfrancesco Favini was in a bunch of Gabriele Muccino films about angsting 30somethings having delayed quarter-life crises (hey, it's Italy!). One I'm 80% sure he was in was L'Ultimo Bacio (The Last Kiss), which was very trashy and lovely. Most recently, I noticed Favini in the Narnia sequel. (Next to another Italian actor, Sergio Castellito.)

OMG the Ewan. I can't stand Dan Brown in book or in film, I was fed up to the teeth on Vatican conspiracy stories years ago, but I'd consider watching this just on the strength of those pictures. As my Southern relatives would say, DAYum.

That last Ewan McGregor screencap is making me re-think my anti-Angels and Demons stance. But then again there is Tom Hanks and that is enough to put me off any movie. Not to mention Dan Brown's writing - The da Vinci Code was such a disappointing book that I wasnt inspired to even check out Angels and Demons! Sigh... I think I will just come back to your post and gaze at the Ewan, often. I'll even watch Thornbirds if they make it with him! :-D

After all the superfluous hype about the da vinci code/ dan brown I didn't think I would go and watch this film but I found myself watching it anyway and I won't pretend that I wasn't entertained- but then maybe that's because I haven't read the books.
Of course it could just be because of the vibes of watching Ewan in the role of a priest..

Heqit - Unfortunately, the fun of Father Ewan - who is, it should be noted, also a bit of an action hero in the movie - doesn't quite make up for how... stupid this film is. But if/when they make the Father Ewan Takes Shit Down spin-off movie, I'll be there.

Sonya - That's the key: expectations! I was far too excited to see this, and severely disappointed.

You are so not alone on Stellan. He is hawt. Also this movie looks very dour-boring.

Why isn't Annie Hall in your list? I would love a review. And Coppola's Dracula too. Thanks