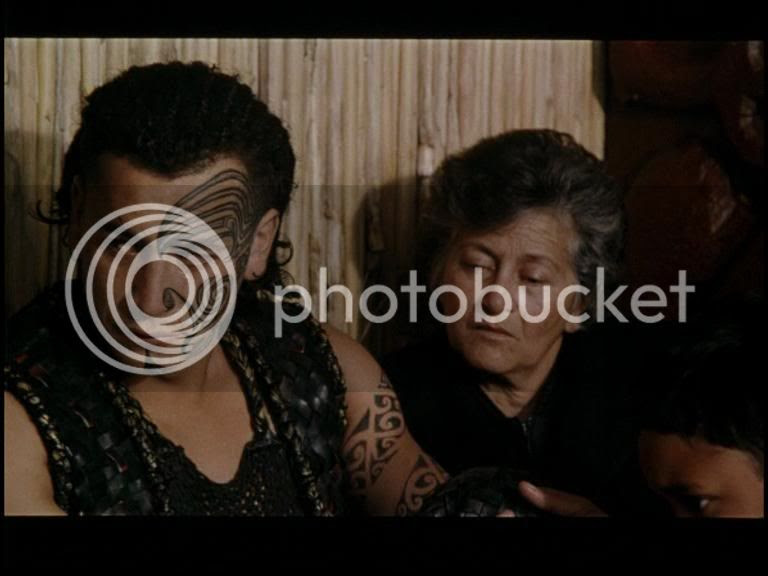 Nig (Julian Arahanga), a young Māori gang member, in a scene from the wonderful, troubling Once Were Warriors.

Although we always sell ourselves as being pan-cultural and 100% globalized, we do, actually, suffer a little bit from favoritism. And one country for which we have an inordinate amount of fondness is New Zealand. Ah, New Zealand! Land of Sam Neill, sheep, Tolkien stuff and wine! Oh, New Zealand! Heady blend of Pacific island cultures! Huzzah, New Zealand! The stark beauty of the landscapes, the glorious Māori art, the penguins in the south, Xena: Warrior Princess, and the Zen retreat-esque vibes of peace and serenity! The only problem with New Zealand (apart from how shamelessly expensive books are there; I mean, really, what is up with that?) is that it's just so darned remote. You have to really want to go there in order to immerse yourself in glorious Kiwi goodness, as the trip is several planes away from, well, everywhere.

However, you can always take the second best option: watch a movie.

Once Were Warriors was sold to us repeatedly by Kiwis and non-Kiwis alike as being the Ultimate Kiwi Film. We were skeptical, as we were pretty sure that the absolutely brilliant The Piano (starring Sam Neill, music by Michael Nyman, for the love of God) is the end-all, be-all Kiwi film. How, we thought, could anything possibly top that? Then of course there are those who say Whale Rider is great (we haven't seen it), and you have the the rabidly insane Lord of the Rings fanbase to contend with. Could Once Were Warriors really compete? And could it top them all? 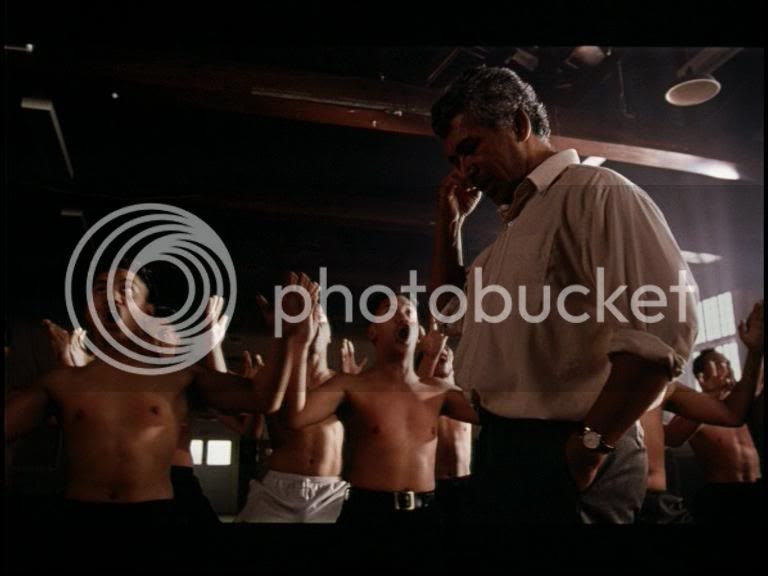 The haka scene: one of our favorite moments. 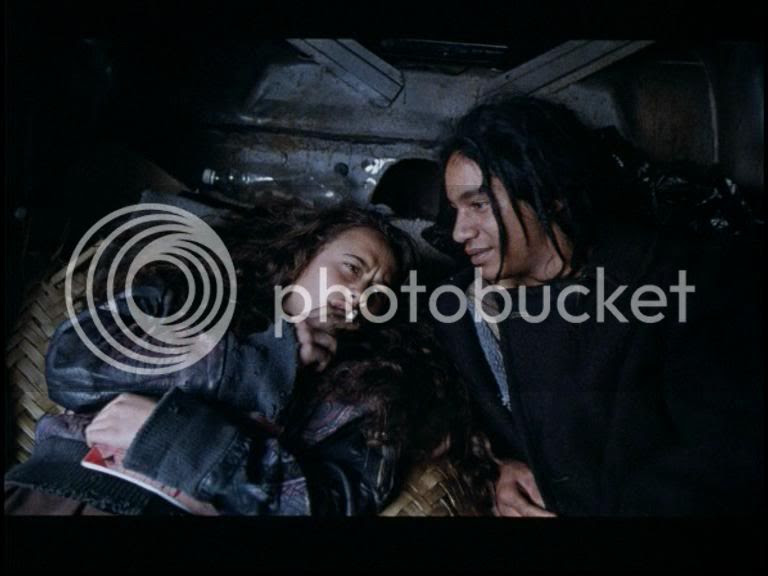 Well, the answer is: yes, it competes. We still consider The Piano a better-made film, and we enjoyed it more, but Once Were Warriors is an important film, with a stark, heartbreaking look at a little-known demographic: the modern Māori community. Indeed, it is because of its content that Once Were Warriors is so good.

Essentially a typical Dickensian tale of poor families with evil fathers, it takes place in and around the run-down home of the Heke family. Father Jake (Temuera Morrison, i.e. Jango Fett) is a violent, sexual, hard-drinking man who's recently been laid off. He holds wife, Beth (Rena Owen), in a high-intensity love/hate affair filled with extreme swings of abuse and seduction. Meanwhile, their five children are struggling to keep it all together, each in their own way. Eldest son Nig (Julian Arahanga) has recently joined a Māori gang, while second son Boogie (Taungaroa Emile) is arrested for a petty crime and put into a boy's home. Daughter Grace (Mamaengaroa Kerr-Bell) is the family's peacemaker and solid core: she cares deeply for her siblings and goes to great lengths to protect them, especially in the moments when their mother can't. 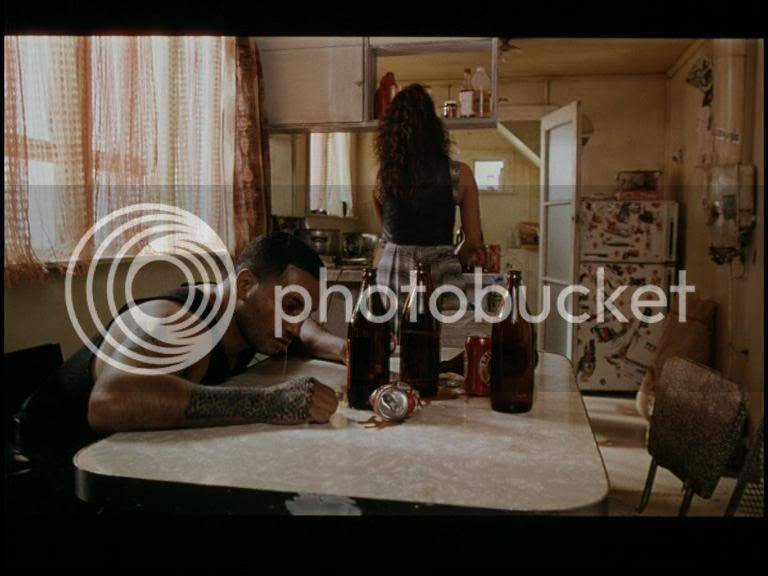 The film is brutal and brief (only 99 minutes), and it's also very straightforward. Much of the dialogue, family dynamics and plot points are well-worn clichés in the genre of the Hardcore Troubled Working Class Home Life Film. Indeed, so inured are we to these staples that our emotional reactions were often quite muted - more muted than they should have been, given how awful some of the scenes were. (And, importantly, even if it's a cliché in film, that doesn't mean it doesn't happen in real life.) The filmmaking style was also blunt, even at times sledgehammery: a quick cut from Jake beating Beth to a snarling dog hunting through scraps, a mother's tormented wail fading into the shriek of a passing ambulance's siren. This is a far cry from, for example, A Guide to Recognizing Your Saints, which takes an equally tired tale - except this time set in the Bronx - and, through nuance and post-modern presentation, makes it fresh and new. Once Were Warriors' freshness lies almost entirely in the uniqueness of the context (as we said): the modern Māori community in New Zealand. 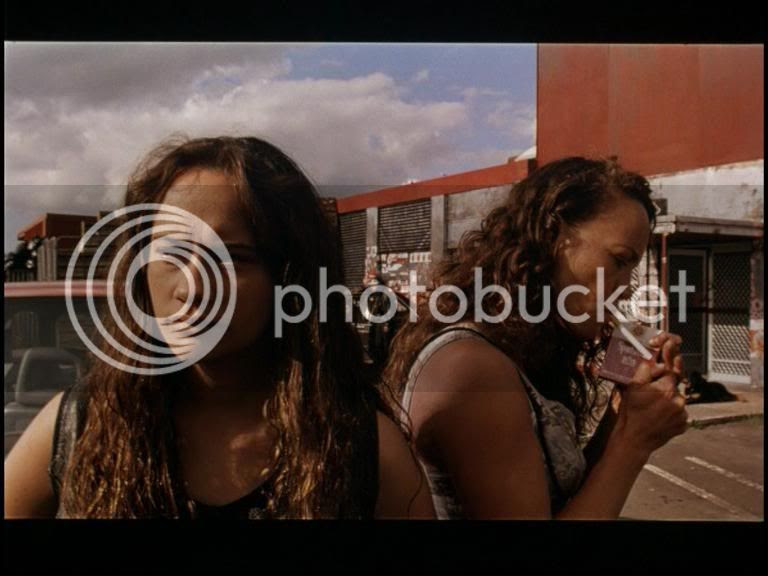 A great shot: Grace and her mother (Rena Owen).

Indeed, the links back to Māori culture and community had the strongest effect on us: the electrifying scenes of Boogie learning to do the haka, Beth's nostalgic memories of life in the traditional community, the scenes where Nig joins the gang and emerges with his new facial tattoos. These moments were beautiful and very affecting.

On the one hand, the film could be about any family anywhere suffering from alcoholism, poverty and domestic abuse - taken that way, the film fails to make much of an impact, with poor writing and shaky acting. But on the other hand, the film is an incisive look into how modernization, colonization and globalization affect traditional cultural practices: in particular, what it means to be Māori in the 21st century. Taken that way, the film is a powerful and heartbreaking portrayal. Given also that Pacific island cultures are terribly underrepresented in modern filmmaking, Once Were Warriors is that much more significant.

You have to, have to watch Whale Rider (it is not a perfect film, in cinematic sense but for a Kiwi lover, it will be delight) Actually it is highly recommended for anyone who is interested in other cultures.

The "Star Wars: Clone Wars" cartoon was on in the restaurant where I just ate, so I was literally thinking about Temuera Morrison an hour ago.(Mainly, "he's so hot, why have I only seen him play wife beaters and clone troopers?") You are psychic!

And sorry, I can't help being namedroppy: I met him at a Star Wars convention, and, in addition to being hot, he was really nice and appreciative to the fans. I mentioned "Once Were Warriors," and he said "That was a really intense movie to make." I'll bet!

I saw this movie when it released and to this day still remember the intensity. It is an eye opening and emotionally draining look at the social issues in the Maori community not the usual pretty pictures we see of NZ.

It reminded me of the stories told about life in the US for Native American in their communities.

Anarchivist - Wow! I just had a moment of geek glee to hear you've met Jango Fett. And how interesting to get some insight into the making of THIS film - I did indeed sometimes wonder what Temuera was thinking in some of those scenes. It's such a demonic role!

Anonymous - Exactly! I loved the cheeky moment when the film opens on this stereotypical and beautiful NZ panorama, but then pulls back to reveal that it's an ad in a dirty, noisy urban center (Auckland?). And great point re: Native Americans - which we have so few films of as well!

At the same convention, I also met Biggs Darklighter, which was ridiculously exciting! Sadly, no Wedge though...

This film is just ravaging to watch. It doesn't blink and doesn't flinch. Yes, it could be any family anywhere in the world but it's THIS family that breaks my heart every time I watch it.

It's hard to say I love this film because I don't love what the characters do, any of them - it's depressing beyond words. But I do watch it at least once a year and recommend it frequently. I liken it to a sunburn suffered willingly. It hurts but I will do it over and over again because it makes me feel alive and broken-hearted at how much crap life can dish out.

I watched the movie today and I agree with your opinion fully. The most beautiful scenes come from the Maori context and it was really interesting to watch it.

Also the point when the daughter dies and the mother is getting herself and the family together again is a very moving part of the movie.