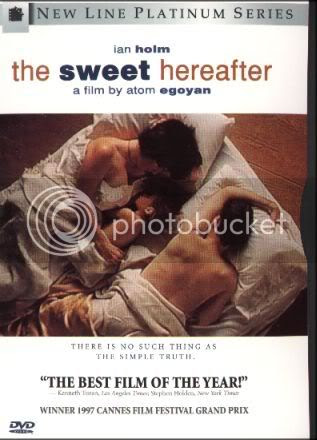 Atom Egoyan's stark, beautiful The Sweet Hereafter is a tale about grief, helplessness and the innate, all-consuming need to protect one's children. Ultimately, the film shows that sometimes, even with the best protection and control, tragedy may occur. And, even more confoundedly, the tragedy can be essentially meaningless - a horrible accident with no perpetrators, only victims. How parents accept (or don't) this existential helplessness is explored in a not so much gloomy as meditative picture by the noted Canadian filmmaker.

One day in deepest, snowiest Small Town, Canada, a school bus full of children meets with a terrible accident. Few survive: the beloved bus driver, Dolores (Gabrielle Rose), and a thoughtful middle school girl, Nicole (an amazing Sarah Polley), now in a wheelchair. Shortly after the accident, a lawyer, Mitchell Stevens (Ian Holm), shows up. With apparent emotional authenticity, he begs the bereft parents to join him in a class action suit against - the bus company? The school board? The highway maintenance people? Well, someone. Stevens assures the devastated, grieving townspeople that he can "channel their rage", "assure this never happens again" and "seek, not compensation, but punishment". Meanwhile, during his interviews, we the audience uncover the usual can of worms: one couple are believed to be pot-smoking hippies, widowed mechanic Billy (Bruce Greenwood, in a huge mooch and missing some teeth) is having an affair with the motel owner's wife, and there may even be a case of incest or child abuse in the town.

A powerful image from the film: the looming specter of tragedy. Can we protect our children from everything? 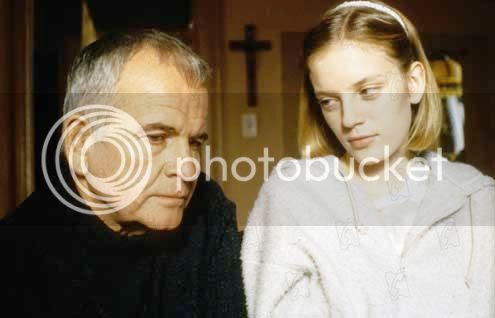 Ian Holm and Sarah Polley were amazing in this!

This may make it sound a bit soppy or melodramatic, but everything is handled with great skill and sensitivity. Furthermore, the story is richly textured along Robert Browning's The Pied Piper of Hamelin, which Nicole reads to the younger children in several scenes:


And the Piper advanced and the children followed,
And when all were in to the very last,
The door in the mountain-side shut fast.
Did I say, all? No! One was lame,
And could not dance the whole of the way;
And in after years, if you would blame
His sadness, he was used to say, --
``It's dull in our town since my playmates left!
I can't forget that I'm bereft
Of all the pleasant sights they see,
Which the Piper also promised me.

The "Piper" could be the lawyer, or Nicole's father, or death, while it's clear the "lame" child is Nicole herself. Though it could also be the widower, Billy, or anyone who survives a tragedy.

The narrative also has a fascinating structure: circling around the accident, a plane trip Stevens takes two years later, the months before the accident, and the innocent childhood of Steven's troubled daughter. The scenes link into each other in novel and, at times, heart-wrenching ways - we watch Nicole read the Pied Piper poem to Billy's two adorable children in one scene, and we watch Billy's aghast expression when he witnesses his children's accident immediately after that. These moments could be months apart, but linking them so close really drives the devastation home. 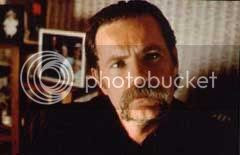 Bruce Greenwood in his gynormous handle-bar mooch. Canadia Schmanadia, someone get that man into an American Civil War TV movie. Ideas! Who should he play? I say Pickett (of "'s Charge" infamy).

It's ironic that we should have been reading David Sheff's devastating Beautiful Boy just yesterday, as it covers much of the same ground as Egoyan's film. Sheff's son, Nic, became a meth addict in his teens and Beautiful Boy follows Sheff's particular journey as being the parent of a drug addict. In The Sweet Hereafter, the protagonist - lawyer Mitchell Stevens (Ian Holm) - is also the father of a drug addict. And, in one scene, he seems to voice Sheff's most tragic insight: how rage and helplessness can twist love into something very painful, for everyone involved. For Mitchell Stevens, his drug addicted daughter is "dead" to him - her ranting phone calls fill him with visible grief, and he complains not being able to "know" who he's speaking with. In one moment of semi-drunken vulnerability, he seethes: "Well, enough rage and helplessness and your love turns to something else. It turns to steaming piss."

Sheff's other great insight in Beautiful Boy is how, just when you think you've reached your limit for coping with awful tragedies, you find that... you can cope with more. Life goes on. The character of Billy embodies this realization: already having lost his wife to cancer a few years before, he follows his twin children to school in their school bus every morning because, as one character puts it, it's comforting. A sense of control. We then have the pivotal moment, halfway through the town, when Billy helplessly watches the bus skid off the road. This is pretty much inconceivably awful for the PPCC - nervous breakdown-worthy - but Billy plugs on and, importantly, angrily refuses to take part in the lawsuit.

The stark difference between the fathers seems to represent the two ways of coping: anger/grief and grasping for control (Stevens) versus grief/anger and admitting helplessness (Billy). While Stevens seems almost convinced of his own pitch in some scenes - convinced that suing someone will help the grief - Billy is unambiguously clear that, "unless you can raise the dead", there is nothing to be done. Shit happened. That's that. Ultimately, the film seems to demonstrate that the longer you hold onto the belief that you can control everything (or that you should, or have somehow caused your tragedies), the longer you will find yourself angry and grieving at your helplessness. The sooner you let go, the sooner you can achieve a tenuous sort of acceptance or peace.

The beautiful cinematography captures both the pervasive sense of emptiness after such a loss, as well as the somewhat oppressive gloom of wintry remote Canada - though it also allows snatches of bittersweet beauty: the pink rays of the setting sun, Nicole's wisdom. The performances - particularly by Ian Holm, Sarah Polley and Bruce Greenwood - are absolutely amazing. We have a soft spot for Ian Holm (hey, it's Bilbo!) and indeed had been tracking this film for some time, knowing it was one of his best performances. He delivers some very powerful scenes indeed: the dead-eyed lassitude of receiving his daughter's ranting phone calls, the semi-conniving, semi-heartfelt attempts to reel the grieving parents in. Sarah Polley blew us away with her age and grace - it was such a layered, nuanced performance. The last time we saw Bruce Greenwood was eating alien slugs in this year's Star Trek - this, um, had a bit more depth. (Though, hey, go Captain Pike! Woohoo.) We look forward to exploring his other notable collaboration with director Egoyan: Exotica.

We can't help but compare this film to others we've reviewed: in particular, Nanni Moretti's The Son's Room, which examines a parent's grief in a much more microcosm, warmly humanistic way, and another Italian film, Pasqualino Settebellezze, for taking the "survivor's dilemma" (i.e. Is being the survivor really always the best deal?) to its most extreme imaginings. Very different films, but exploring similar themes and therefore maybe worth a look together. In the meantime, tired of PPCC monologues? Watch what Siskel and Ebert had to say about it!

I consider this film a masterpiece of cinema.

Egoyan is a good film maker but too indulgent for his own good (wait until you watch Exotica) but in The Sweet Hereafter, everything clicked perfectly.


I think Pied Piper is death.

I was lucky enough to see this on the big screen when it was in theatres, crazy it was in 97.. wow. One of my favorite Canadian movies. There was a creepy vibe in some canadian flicks in the 90's..a reality creep.. like the original movie called Crash, not that hollywood flick.
The soundtrack to S.Hereafter is super also.