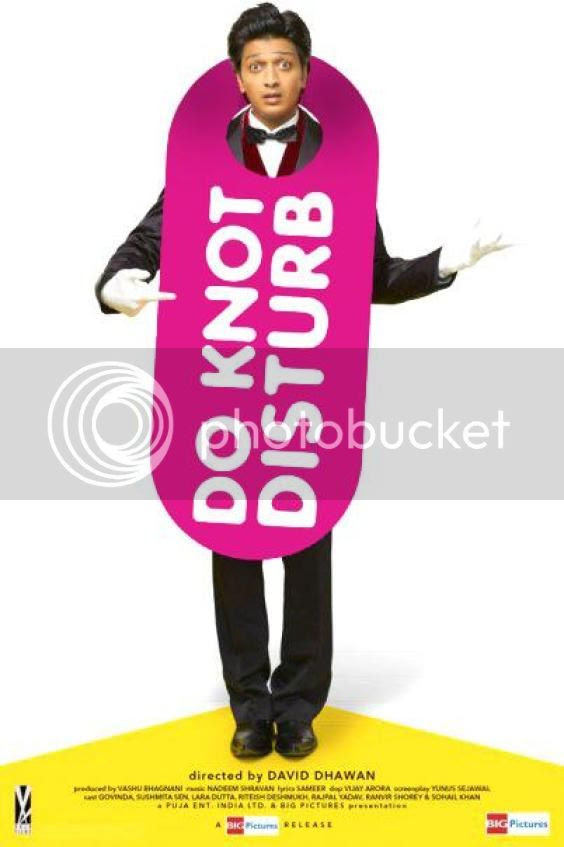 David Dhawan's Do Knot Disturb, a remake of the French film La doublure, is much as you would expect: a low-brow comedy filled with the usual stereotypes of the adulterous husband, the saucy temptress, and an assortment of goofy, lusty supporting characters making pratfalls while they chase after supermodels. It reminded us, actually, very strongly of something Italian actor/director Cristian De Sica would have made - think Merry Christmas, in particular - and indeed Govinda seemed to be channeling De Sica with his smarmy, middle-aged bumbling infidelities. Maybe because of this familiar vibe, or maybe because our expectations were rock bottom, or maybe because Ranvir Shorey has a small role, or maybe because one of the songs was quite catchy, we actually found ourselves mildly enjoying this film! 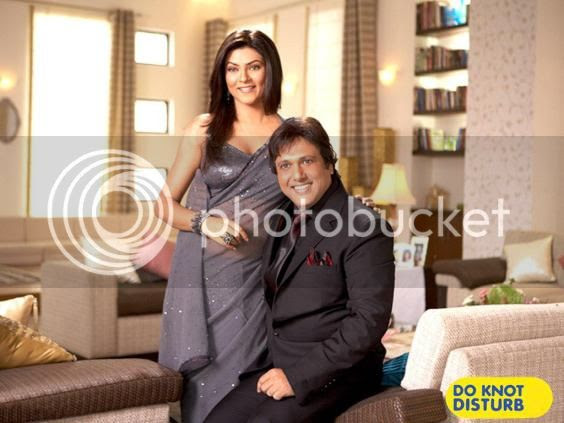 Govinda made good use of his cheesy smile, and Sushmita Sen of her "don't waste my time" vibe.

The story opens with smarmy, middle-aged Raj (Govinda), who is harried both by the demands of his gorgeous wife (Sushmita Sen) and the demands of his gorgeous lover, Dolly (Lara Dutta). When Raj is inadvertently photographed with Dolly one day, he concocts an elaborate story that the third person in the photo - a clumsy waiter (Ritesh Deshmukh) - is actually Dolly's boyfriend. In order to give credence to the story, he hires the waiter to play the part. The waiter - who is Dolly's biggest fan (Dolly has a job?) - is only too happy to oblige. Yet Mrs. Raj suspects anyway, and so sends her devoted friend (Ranvir Shorey) as detective to investigate the waiter-Dolly pair. Meanwhile, an increasingly jealous Raj also sends his own detective to make sure things don't go too far. Pretty lame jokes ensue. 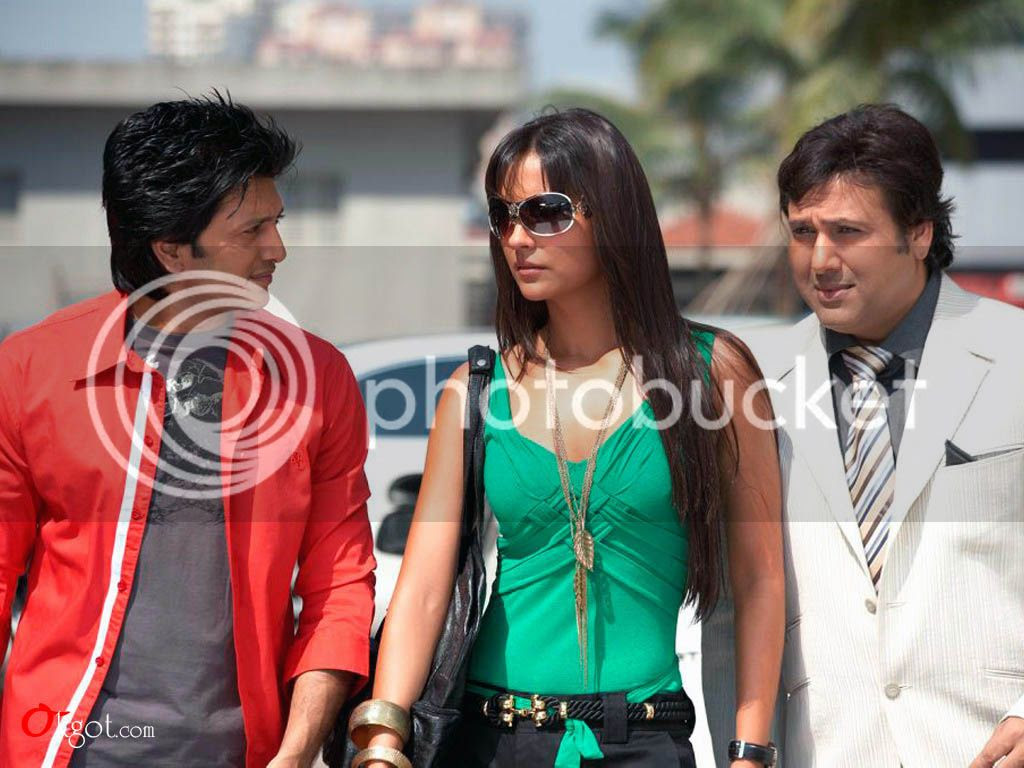 The photo in question. 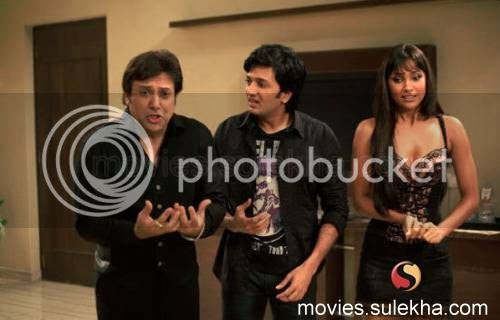 Goodness - compare Govinda in this pic to De Sica in the third pic on the Merry Christmas review. They went to the same school of acting!

Much like De Sica's Merry Christmas, this story is funny in its moments of zany, absurdist comedy (De Sica's tongue piercing sequence, Govinda's suddenly shrill falsetto), but is pretty dull in its attempts at more racy humor. At least, how many double entendres can you make about plugs and outlets? TVs and DVD players? God, spare me. Thankfully, the bathroom humor didn't go too far - always a risk in movies like this. Instead, it played it safe - although this is a comedy about infidelity, it's actually quite tame (or, at least, juvenile) in its handling of sex and seduction. The one rare moment when it all fell together and actually worked as a sort of joyous celebration of love-making was in the very catchy song, Zulfaen Khol Khal Ke, sung between Govinda and Lara Dutta in their Presidential Suite (of adultery! and sitars!). The fun and frollic of these two - both actors who we're quite fond of - was just charming! And gosh, Govinda's dance moves!

Which segues nicely to the performances and other stuff. As we said, we're actually quite fond of the entire cast here - Govinda, Lara Dutta, Sushmita Sen and Ranvir Shorey are always fun to watch. Rajpal Yadav was, as expected, way over-the-top and played very hammily to the "front bench". The songs ranged from fairly "meh" to peppy enough that we were ready to dance out of our seats (the previously mentioned Zulfaen Khol Khal Ke, and the bhangra New Year's number). David Dhawan's direction made fab use of energetic cross-cuts - this actually kept things moving quite nicely when the plot and forced humor threatened to drag everything down. Overall, a C effort - not terrible, but nothing to go out of your way for.

Posted by a ppcc representative at 20:33

Yeah, I'll watch it for the cast. And David Dhawan who should be given roles too, he's so cuddly.

Would you recommend it to those who saw and enjoyed le doublure?

I'm going to watch for Riteish, who needs a break-out role! He's just so CUTE!

Riteish is pretty much the awesome. I've had a crush on him since the end of Bluffmaster.