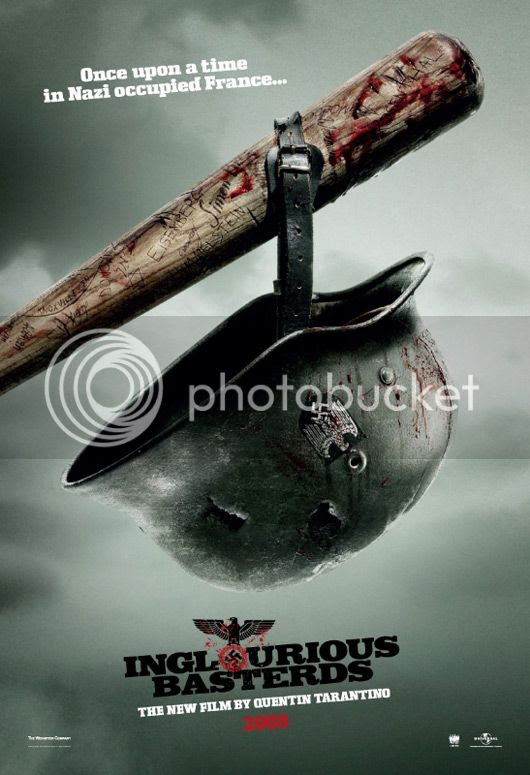 Brassy and demented, Inglourious Basterds styles itself an old, wartime pulp, from its hokey title cards ("Chapter 1: Once upon a time in France...") to its staccato use of melodramatic music. The ultimate WWII revenge fantasy, it's almost scary in its over-the-top portrayal of evil Nazis and bad-ass Allied soldiers decimating those Nazis. That's not to say it's not also ambiguous. Quentin Tarantino is too smart a director not to be drawing uneasy parallels between the carnage of both sides - indeed, both the "good guy" Allies and "bad guy" Nazis are sadistic and cruel, with the body count tallying up for each. And, as The New York Times' Manohla Dargis notes, with some concern, the ultimate ambiguity is that the film's show-stealer is the villainous "Jew Hunter", Standartenführer Hans Landa (Christoph Waltz). But more on him - and he is pretty disturbingly spectacular - later. 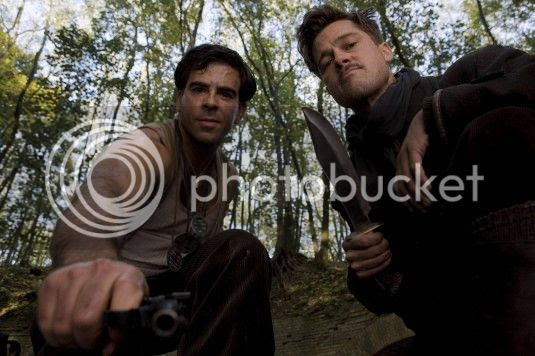 Brad Pitt did some serious channeling of Lee Marvin for this role, which we really appreciated. 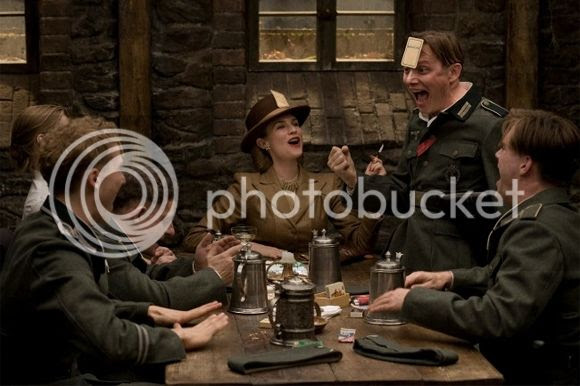 The plot is large, almost unwieldy, and the characters come in groups (separated by the "chapters") who eventually come together in one ensemble showdown. The story begins with Standartenführer Hans Landa, who is in France to seek out the remaining Jews. One Jewish girl, Shosanna (Mélanie Laurent), narrowly evades his clutches and eventually becomes a cinema owner in Paris. There, she meets a seemingly bumbling young Nazi soldier, Private Fredrick Zoller (Daniel Brühl, of Goodbye Lenin!), who falls for her big time. Meanwhile, a group of hard-bitten American commando types, led by one Aldo Raine (a very grizzly Brad Pitt), are terrorizing Germans everywhere with their ultra-violent guerrilla tactics - their mission is to make an example of every Nazi soldier they find (cue some of the awful violence), and, given Hitler's (Martin Wuttke) various meltdowns, it seems they're working. On the other side of the channel, the British (including a nearly unrecognizable cameo by Mike Myers!) are sending their top film critic/spy, Archie Hicox (Michael Fassbender), to Paris in order to assassinate the top German brass. Uh... what? 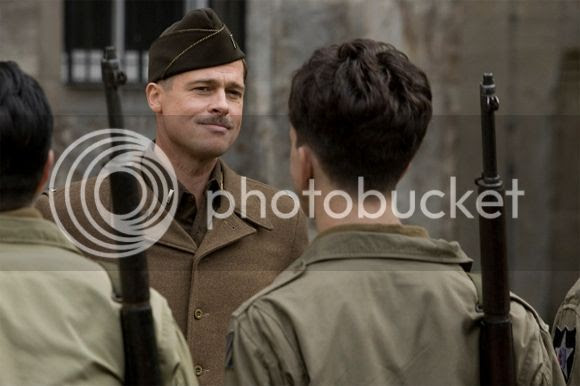 Now, if you've seen one Quentin Tarantino film, you've seen them all - in the sense that the giddy carnage and whimsical touches (was that a David Bowie song at one point?) are pretty standard Tarantino, as is our ability to laugh and cringe and perversely enjoy a film that is, fundamentally, pretty sick! But, sick though it is, it was also quite clever and endearingly in love with its medium: cinephilia in film is always nice to see. Did any of these movie references mean anything? We don't know. Do any Tarantino films mean anything? Hmm. 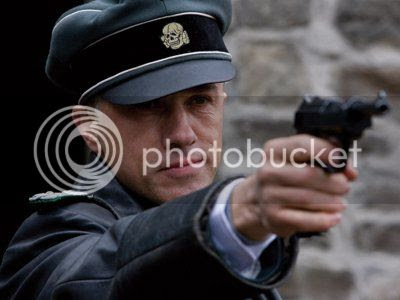 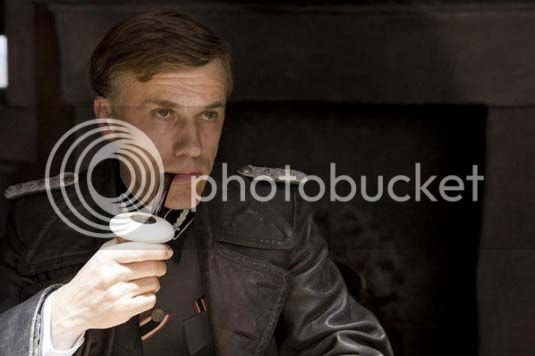 Anyway - now onto the star of the show, Christoph Waltz! Who is this guy? Whoever he is, he was spectacular in a way that's rare and delightful: an unknown actor completely stealing the attention and charming everyone's pants off. At our forced "interval" (ah, we love you, Indian cinema), the entire group was all a-lather about, "But who's that incredible Nazi?!" He had a sort of evil charisma similar to Daniel Day-Lewis' performance as Bill the Butcher in Gangs of New York. Except whereas Bill the Butcher was just fearsome and fascinating, Hans Landla is also delightfully insane and quite hilarious. Two scenes in particular stand out: the opening sequence (which is perhaps the best part of the film, masterfully done) and the scene when Hans confronts the actress-spy, Bridget von Hammersmark (Diane Kruger), at the theatre. He embodied the film's vibe - demented, lunatic, comical, violent - in a way that was over-the-top, enchanting and completely pitch perfect. Everyone is and was talking about this guy, and we can only join the clamor: Mr. Waltz, encore!

Posted by a ppcc representative at 20:00

Omg I loved this movie, but as grudgingly as i admit once you've seen one Tarantino you really have seen them all. With pulp violence and talk heavy but wonderful climaxes, I just felt sooo satisfied after watching and laughing all through! I think perhaps Rum and Quentin are destined for each other in a typically Masala Pradesh like love story!

Very few directors are capable of depicting violence the way Tarantino does. Yep, it does not change anything, its still sick. But, he makes it look confusingly aesthetic. Best thing about his movies is his use of existing soundtrack pieces from previous movies. Not only does he do that, he does bring in a reference of the musical piece to the situation/actor/scene one way or the other. Nice review :)