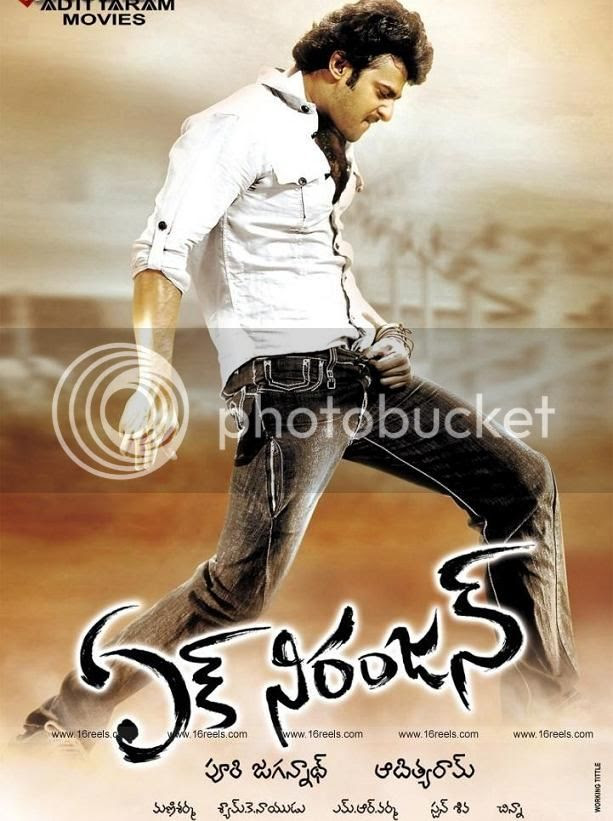 So shiny! Let us sing the praise (great praise!) of the director of Ek Niranjan! And the editor! And cinematographer! We haven't seen such shiny, glittering, gorgeous visuals in a film since... well, since Transformers (so much sun! so much sand!). For this reason alone, we ranked Ek Niranjan very high on our personal list of Telugu films (now numbering three and a half). With a hefty budget and such razor-sharp direction and cinematography, it was just lovely.

Essentially the hyper-typical family separation masala opera, young Chottu (a very handsome Prabhas) is your standard goonda with a heart of gold. Working as a bounty hunter for the local police station, he romances feisty guitar teacher, Sameera (Kangana Ranaut?!), in the standard way, and is pursued by the villainous Johnny Bhai (Sonu Sood?!) in a slightly non-standard way. Throw in your usual comedy subplot - starring Brahmanandam... is this man in EVERY TELUGU FILM EVER MADE?! (we say after three) - as well as another comedy subplot in Bangkok (unexpectedly v. funny) - and you have your standard film. So let's dispense with the standard, and move onto what was a bit different: 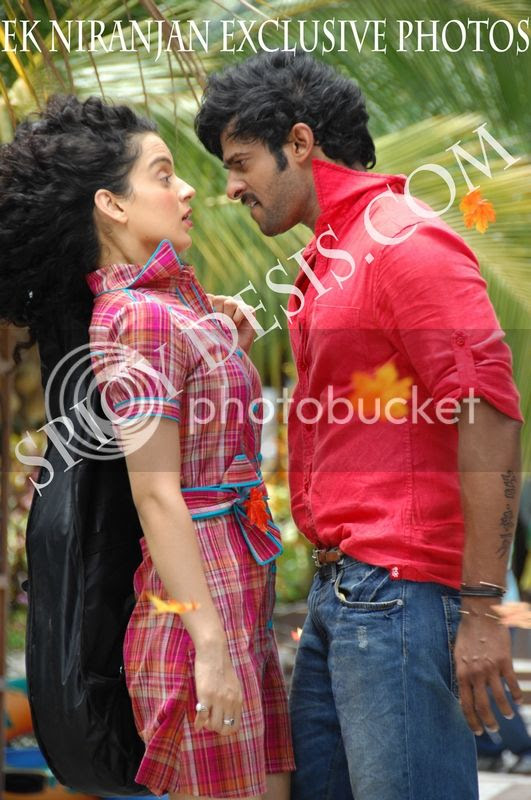 Spicy and exclusive, yay! And look at the hair texture, vah!

Some directors have such a fabulous aesthetic, and Ek Niranjan's director, Puri Jagannadh, has a great eye. Some of the songs reminded us of Farah Khan's Main Hoon Na for the use of mirrored sunlight and natural sparkle. Vah! The choreography, meanwhile, was the usual impressive southern stuff - for the Hindi-phile that we used to be/are, we can compare it to Prabhu Deva's magnificent work in Pukar. (Prabhu Deva is also, of course, from the south.) What dynamic visuals! What use of foreground, background and middleground! What use of interesting apertures and focal depths! What diagonals! What golden ratios!

What is a gosh darned shame, however, is the relatively mediocre music. When the studly Prabhas was throwing himself around in such interesting ways to such boring, lethargic beats, we couldn't help but feel restless. Give the man a melody, for the love of God!

Sonu Sood? Kangana? That dude with the bushy moustache from Swades's RV song?

Special note about Sonu Sood: apparently, his Telugu film career is dominated by villainous roles. Who knew! At first, we were skeptical - the cuddly, honorable brother from Jodhaa Akbar as an evil mafia bhai? Yeah, right. Well - we've been sold. He was like the Bizarro young Amitabh Bachchan, like 1978's Don with 2007 Don's mentality. Like the Angry Young Man... gone EVIL. Sonu was very enjoyable as the kinky (sado-masochism?!), slightly drama queen ("I'm the hero here, not the villain!") pin-up model (what pecs!) with the dodgy fashion sense. Indeed, most of the film was a War of Hotness between Prabhas and Sonu. We still don't know who won. 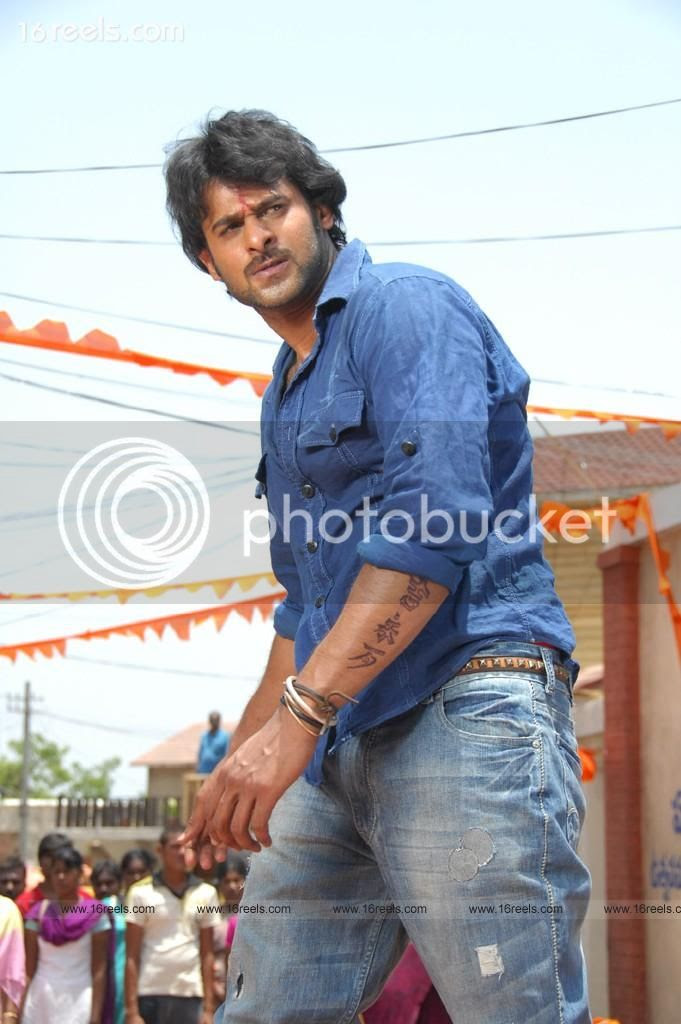 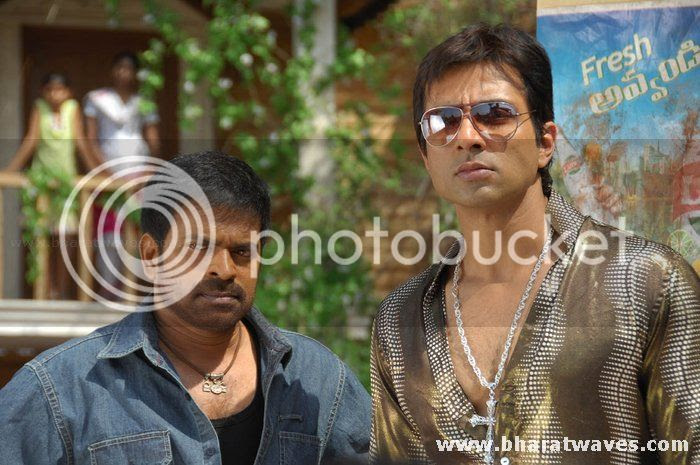 The winner. Also: now that we mingle with the stars, we saw Sivaji the other night and were astounded by his tallness. So how tall is Sonu?!

So all the songs were incredibly rich visual feasts on which to gorge one's eyes (except for the boring Chottu's So Vulnerable song, yawn), but one song - the Michael Jackson vs. Heath Ledger's Joker tribute song - really stood out for its... unexpectedness.

4. There is no fourth point.

5. Clearly, it's time to learn Telugu.

Pukkah! And someone take the exclamation point away from us! We are abusing it!!!
Posted by a ppcc representative at 11:35

Fab. Just fab. So nice to have you writing again :)

We love Sonu Sood! We also love it when the audience wins!

Jealous!! So jealous!! I've been pimping this film for months!! I've got tons of screencaps and a music review at mine. :)

I'm glad you enjoyed the magic of Prabhas!

Love the review! Hold on a second, you just let it slip in there - you mingle with the stars? Who,how & where??
Brahmanandam is a very beloved comedian in AP. And you are right, he is in almost every Telugu movie ever made since the 80's. In his next movie 'Namo venkatesha', he is commanding a fee equal to the heroine Trisha. He is very talented, but sometimes is part of really crappy projects too.

Meh....I saw this in the theater with my kids and mom(! who will not willingly walk into a theater with me w/o reading a review)and didnt really enjoy it at all...Prabhas is his usual rockstar self (it's one of those "you have to understand the language" deals to figure why Prabhas is so cool), Kangana looked weirdly out-of-place to me and didnt quite get a lot of love in Tollywood.
If you have the time and inclination, this same team of Prabhas and Puri J (director)had another movie last year called Bujjigadu with Trisha....that one was crazy cool. Comes highly recommended...
And Brahmanandam has just become a lucky mascot...he does his usual shtick in most movies now.
Was very talented back in the 80's but just lost his mojo after repeated viewings.

It's Anon from the upstairs comment again - another recommendation for newly-minted Tollywood fans (I'm one of you :-) ) - Allu Arjun is another of the young uns known for his dancing talent...must-sees are Parugu or Desamuduru if you have the time...

Since you have started reviewing Telugu Films..(i see four here..Mahatma, Arundati,Magadheera,Ek Niranjan)..I would suggest/Recommend you to review some other notable (not nonsensically boasted hit) movies in this last two years..

I strongly suggest you to review this films as these are some good movies which needs to be reached to different regional audience irrespective of their language.

This was best movie i have seen for more movie news at
www.supergoodmovies.com