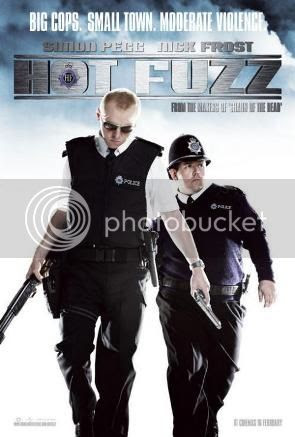 Hot Fuzz is a sweetly comic British film, part parody and part tribute to the guns-blazing action-packed police thrillers of Hollywood or Hong Kong. While the pacing and style is reminiscent of the indie American film Supertroopers, Hot Fuzz also contains vestiges of a Wallace and Gromit-type sense of humor: a quaint English village setting which hides a grotesque killer, over-the-top spectacles of unexpected gore, and a strong whiff of the absurd.

Nicholas Angel (Simon Pegg, adorable) is a hard-nosed, hard-ass police officer from the "blue fury of the London Metropolitan Police Service". With hyperactive cuts and super-efficient narrative, he is introduced to us as an Übermensch: he excels at everything he does. Of course, this leads his superiors - basically a roll call of current UK funnymen (including our beloved Bill Nighy!) - to speedily transfer him from London's busy streets to the quiet, boring town of Sandford. There, we meet the usual assortment of village clichés - including, importantly, the bumbling police chief (Jim Broadbent) and his goofball son Danny (Nick Frost, also adorable) and the sly, serpentine business boss (Timothy Dalton). All in all, everyone in Sandford is terribly English and terribly, well, white.

The only one missing is Eddie Izzard. CAKE OR DEATH!

Which brings us to the Wallace and Gromit stuff: it's English middle class horror fantasy gone demented, as Angel is initially reviled for his big city efficiency (of course) until he stumbles upon an elaborate trail of serial killings (of course) but is not really believed (of course!). Everything is then resolved in the usual way. No rabbits appear as toupees, alas, but there are other laughs to be had.

Much like Supertroopers, Hot Fuzz manages to juggle a sort of surreal comedy which borders on the alienatingly absurd (think Monty Python or Mel Brooks - i.e. not to be taken seriously) that is then unexpectedly combined with some real sweetness (i.e. to be taken seriously). In particular, and as a nod to the legendary bromance of such cop films as... well, anything by John Woo, police partners Angel and Danny fall in love. It's the love between two heterosexual males, but it is as romantic as anything out of Michael Ondaatje. This is all very cute, especially since Simon Pegg and Nick Frost play it straight, without the slightest hint of irony. After reading Manohla's review, as well as learning about Pegg and Frost's Blood and Ice Cream Trilogy, we see that this bromance is intentional and off-screen as well. Huzzah! We want more. 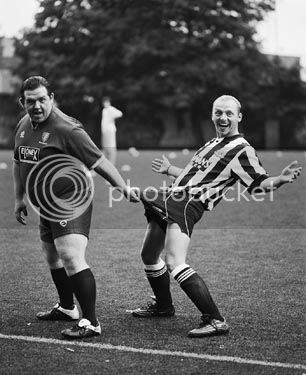 The bromance is strong between these two. And we love it!

THAT is Paddy Considine, who co-wrote and starred in the magnificent Dead Man's Shoes, which you should all go watch right now. Right now!

Other interesting tidbits are, apart from the obvious nods to other police action dramas, the wide-reaching and fun casting. Often these are just details - such as genius comic Bill Bailey playing identical twin police constables (one with straight hair who reads Iain Banks, and one with curly hair who reads Iain M. Banks... okay, it made us laugh) - or cameos (Peter Jackson?!). But we were also shocked, shocked, to be seeing Indy's arch-nemesis, René Belloq (AKA Paul Freeman), after so many years!

All in all, it made us laugh and it made us like Simon Pegg just a little more. Soon it will be love.

Posted by a ppcc representative at 08:18

Have you seen Shaun of the Dead? I like it better than Hot Fuzz, but Simon Pegg and Nick Frost can pretty much do no wrong. Also check out the TV series Spaced, if you haven't already. BRILLIANT.

The first time I saw "Hot Fuzz," I thought it wasn't as funny as "Shaun of the Dead." But it keeps getting funnier on multiple viewings, and I now believe it is a work of true genius. Recently, my husband and I saw a straight-faced movie where somebody jumped through the air while firing a gun, and we laughed and laughed!

"Spaced" is hilarious too.

I LOVE this movie! I'm not sure if it's a British thing or a Simon Pegg thing, but he just shines in everything he's in. I found Hot Fuzz hilarious from the word go, even when people were getting crushed by toppling statues. Also, every character in the film was genius. Thanks for the fantastic review and pics!

I love this movie too. I mean, seriously, there are so many quotable quotes in it that my husband and I could pretty much converse in Hot Fuzz for an entire day. Not... that... we'd ever do that... or anything.