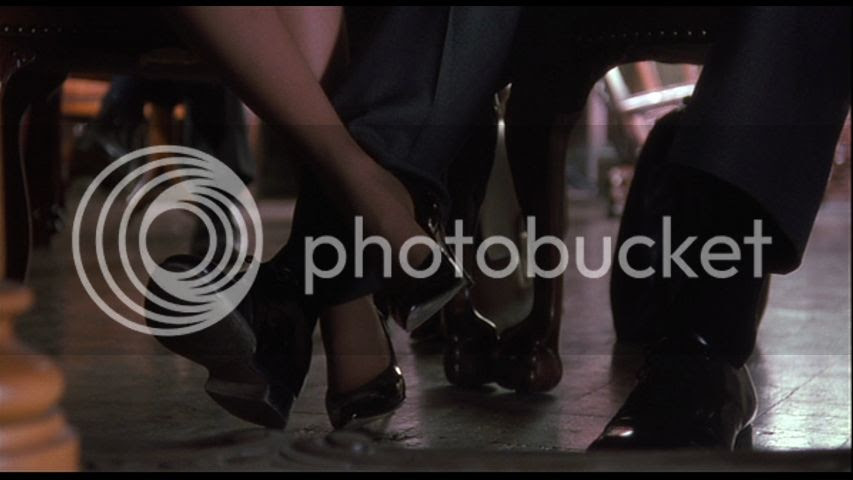 "I'm not gonna spend the rest of my life working my ass off and getting nowhere just because I followed rules that I had nothing to do with setting up!"
-Working Girl

There's no two ways about it. It's sexy, smart, feminist and purely lovable. It's got a sweet, clever humanism, managing to balance a dry sense of humor with a strong underlying Girl Power theme. It's one of our Personal PPCC Classics - a movie we always come back to, and, having watched it again today, a little older and wiser than last time, we admire it for its cheeky philosophical touches (more on those later).

First of all, Working Girl is about Tess McGill (Melanie Griffith). The setting is 1980s Manhattan, a land where men were men and admin assistants were still called "secretaries". But things were changing, and Tess - outwardly just another girl from Jersey with a towering hairdo, screaming-loud make-up and sneakers on her pantyhose - also harbors an intense passion for business. She struggles ambitiously, but finds herself repeatedly hitting the glass ceiling: her attempts to climb up the corporate ladder are invariably squashed, with the men implicitly or explicity degrading her to just another sex object. 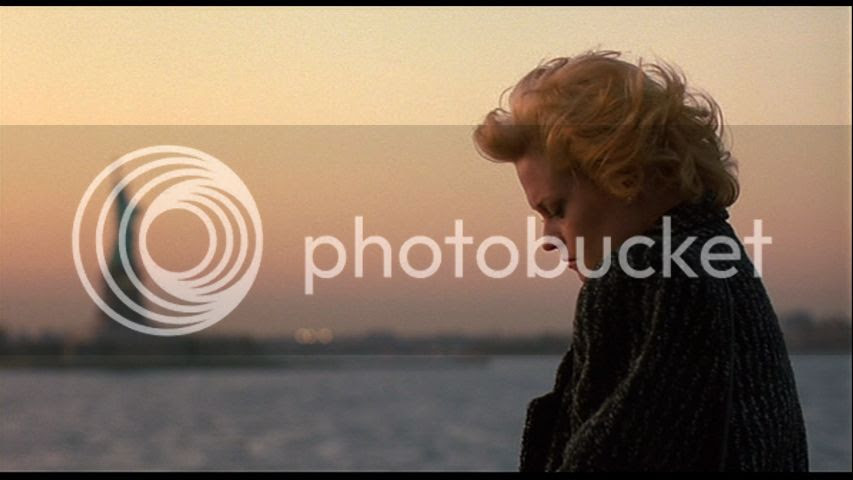 Some not-so-subtle visual metaphors - in America, even women can make it! Yay! 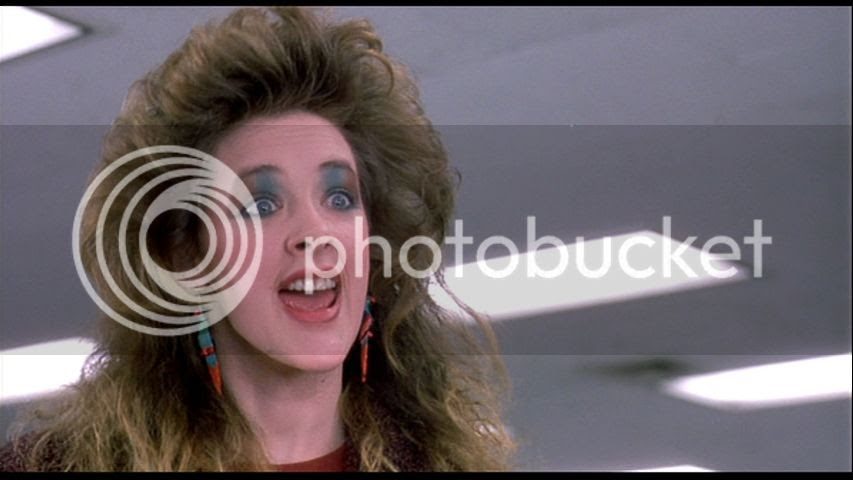 Joan Cusak's look is GREAT in this film!

When one particularly sleazy boss (a young Oliver Platt!) basically pimps her out to his even sleazier buddy in arbitrage (a young Kevin Spacey!), Tess flips and quits. Her next job turns out to be under a woman, Katharine Parker (Sigourney Weaver). At first, things seem great: Katharine is the same age as Tess, and she gives a lot of lip service to helping her fellow sisters up the ladder. "It's a two-way street in here," she assures Tess, who glows at having finally found her "mentor".

Of course, things are not what they seem: when Tess proposes one of her brilliant business ideas to Parker, Katharine minimizes it. When Katharine then breaks her leg on a ski trip and gives Tess the keys to her flat, Tess finds Katharine's evil notes to secretly steal Tess's work and pass it off as her own.

The PPCC gets pretty into this film, so, at this point, we usually scream, "WELL, THIS WILL NOT DO!!! BRING ON THE CARPE DIEM!" 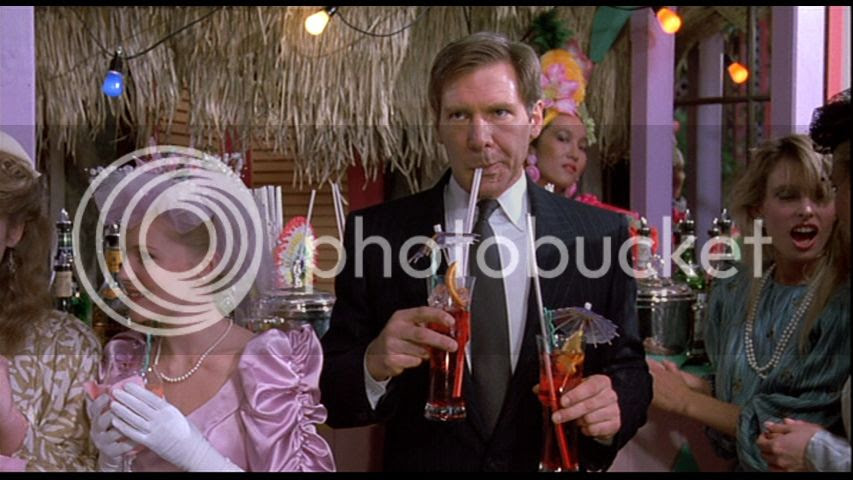 Could he be more wonderful? No.

And bring on the Harrison Ford! On the same day that Tess discovers that Katharine was stealing her business ideas, she also discovers that her blue-collar Jersey boyfriend, Mick (Alec Baldwin), has been cheating on her. Things seem pretty uniformly shit, until Tess hits on the idea of stealing her idea back from Katharine, re-doing her make-up and hairdo into Career Woman mode, stealing Katharine's clothes (ha!) and showing up at an exec drinks in order to meet and mingle. There, she meets fellow lion of the business jungle, Jack (a glorious Harrison Ford), who is immediately smitten. And, as luck would have it, he's also the go-to man for her business idea! It all seems to be falling back into place, but true love (and true business) never did run smooth... FOR LIARS! So how will Tess make it?! 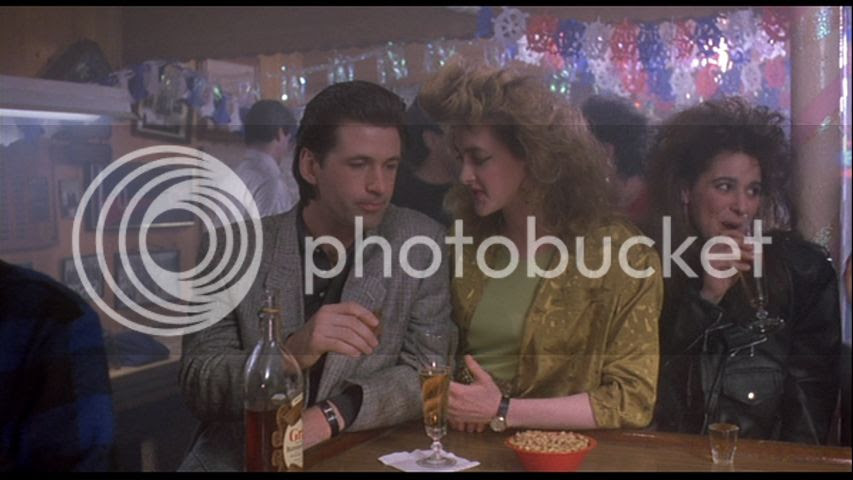 We've been so inured in 30 Rock Alec Baldwin, we forgot this is what he used to look like!

Okay, so we love this film big time. BIG TIME. We love it for two reasons: first, it's well-made on almost every level. Directed by Mike Nichols, who made us cry for the evil lawyer-turned-good in Regarding Henry, this film has wonderful touches: nothing is ever taken too seriously, nor is anything mocked too much. The vibe is one of irreverent gentleness, and great sympathy for our girl Tess. Melanie Griffith is infinitely charming as the endearing Tess: she's a lovable mix of gentle and ambitious, innocent but sharply intelligent. Harrison Ford is rarely comic in this role, and he even pulls a Shashi by going a bit meta and mocking his own real life status as a stud (more on this below).

The second reason we love this film is that it's pro-girl power message is feminist without being too overt. Because unlike more bumbling attempts, Working Girl portrays the very real trials and tribulations we women folk have to face: the stare-downs from creepy men on the street, the hint of mocking when we stray from our traditional feminine roles. Just watch the men in the background as Tess passes: director Nichols never misses an opportunity to show how constantly, systematically objectified she is. Of course, it's cruelly ironic that this film was made by a dude, and that Harrison - the trophy boyfriend! - gets top billing. But the cheeky visual metaphor of the Statue of Liberty (a lady!) and the cunning musical metaphor of Carly Simon's all-girl gospely Let the River Run make up for these minor sins. 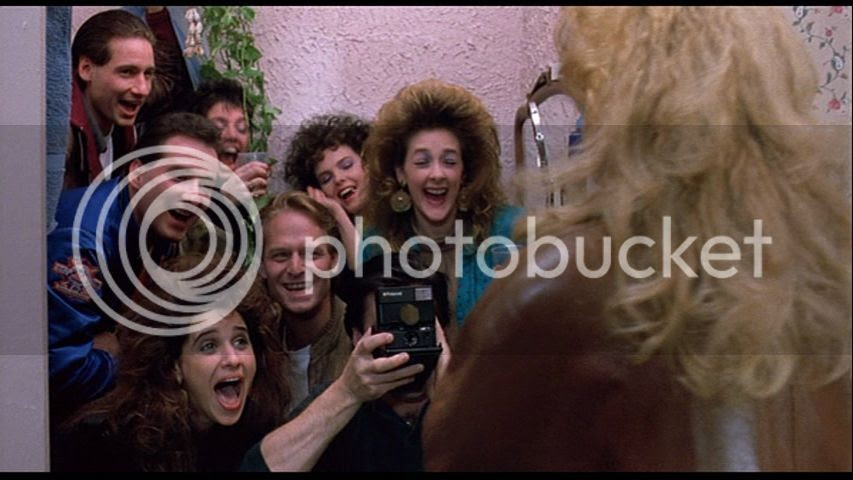 Free prize for anyone who can spot David Duchovny in this picture. His first appearance on screen!

And here's where things get great: Katharine and Jack are the new variations to this feminist tale. Katharine's the scary, predatory woman of post-feminism nightmares; she is aggressive, self-absorbed and demanding. Meanwhile, Jack is used both as a trophy boyfriend (director Nichols never misses an opportunity to objectify him! just watch all the women's expressions as Jack passes, or Joan Cusack's wonderful, "Coffee, tea... me?") as well as a way to undermine traditional norms of manhood while still, er, being manly. Partly this is because, well, he's Harrison Ford. But we also like to think that the movie's about showing how traditional gender roles don't have to end up with meek, subservient women and powerful, career-driven men - nor do women have to appropriate masculinity just to get ahead in business. (One of our favorite lines Jack says to Tess: "You're the first woman I've seen in one of these things that dresses like a woman, not like a woman thinks a man would dress if he was a woman."). You can be a classy lady and a corporate warrior. You can be Indiana Jones and be unsure about yourself. And, if this fairy tale is to be believed, you can get the job and get the boy!

Posted by a ppcc representative at 20:56

YAAAAY! PPCC you're back for a few seconds lol! Love this movie and its soo good for the Vinod-style camera zooms of Harrison! He doesn't get the obligatory bum shot like an Anil or Vinod but gawsh he's cute! And melanie griffith's hair was awesomely bad, it reminded me of the fuglyness that was Dimple's hair in some scenes of Jaanbaaz! Its a nesst!

I've seen this many times but probably not in the last 15 years. You're making me want to revisit it despite my long-held hatred of Melanie Griffith's acting. Hmmm. Just earlier today I was talking about this sort of holding of what we are told are gender-based contrasts and how it's so important for films and tv to show types and roles and values as mutually INclusive!

Wow, It's been ages since I've seen this, but I remember how much I liked it. Quintessential 80s'. Might have to que it up and relive my youth!