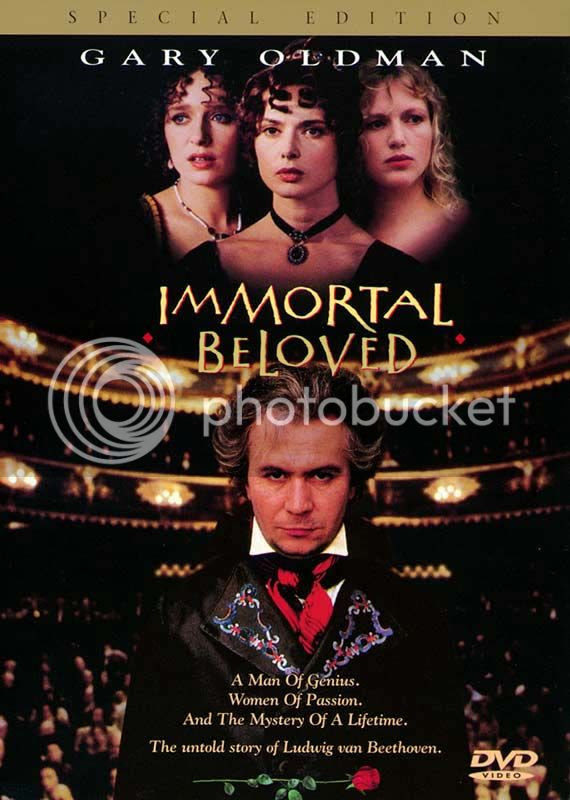 A story: the other night, we at the PPCC had just finished reading Anne Lamott's glorious treatise on writing, Bird by Bird: Instructions on Writing and Life, and, feeling inspired and slightly edgy, we lay awake in bed concocting an elaborate review for one of our favorite films, Immortal Beloved (a review we decided would definitely include, at some point, the phrase "our heart was shattered, our body halved"). Or, as we like to call it, Gary Oldman's Immortal Beloved Starring Gary Oldman, a Tale About Gary Oldman.

Actually, our train of thought was not nearly so pat. The stops on our journey were really really:


1. A bizarre quasi-nightmare in which Gary Oldman appeared as a gruff, lovable, wounded (!), kimono-sporting ninja master with a great haircut. (Think Splinter. Only with a great haircut.) This was a mere cameo appearance in a dream of epic proportions, but even this 5-second walk-on stayed with us into morning. We think it was all no doubt fueled by watching the Book of Eli trailer, or perhaps the brief reference to Sid & Nancy in Brad Warner's book, Hardcore Zen. However it came gurgling out of subconsciousness, it made us realize, once again, that... 2. ...we love Gary Oldman! We want Gary Oldman! 3. But what is a good Gary Oldman movie to watch? 4. Not Sid & Nancy, as we value our good moods. 5. Not Léon, as we are le tired with it. 6. Not Harry, for the love of God. 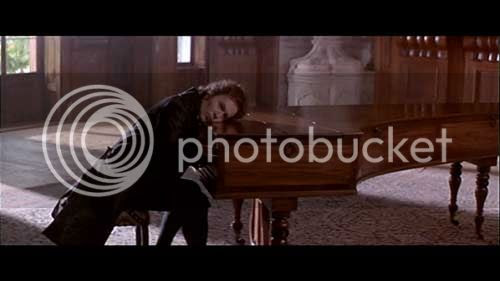 This screencap is required when you talk about this film.

Now, we don't actually have Immortal Beloved on hand, nor have we seen it in several years. But Immortal Beloved is one of those films that has been seared into our memory. Mostly this is because it combines two things which guarantee eternal memory: arousal and shame. Arousal because, even with its glaring, embarassing faults, we are stubbornly unable to dislike it. Not only that, but we find the tale of the eternally-pissed-off Ludwig van Beethoven's numerous doomed love affairs with classy European ladies in the 18th century, all overlaid by some classy Beethoven and Beethoven-era tunes, incredibly romantic. Bodices be-ripped! Beethoven be-played!

And shame, because, it's kind of a clunky, incoherent film with lots of BOLD NARRATIVE MOMENTS (think exclamations marks and capital letters) followed by whimpering nothingness. It's like the director had amnesia or something. It has all this great stuff going for it - tremendous acting, music, cinematographic zeal (the Ode to Joy!) - and yet it never quite hangs together. The narrative jumps around. Momentum is built and then scattered. Dammit, we are not supposed to enjoy films which are so poorly put together!

And yet we do, oh, how we do. After a quick refresher on Wiki and a glance through one fan's YouTube compilation of scenes, we are reminded that the plot centers around the discovery of three love letters, from Beethoven to his secret "immortal beloved", after the composer's death (true fact!). It is now up to his dorky pal, Schindler (Jeroen Krabbé), to figure out which one of Beethoven's numerous exes (ex's?) was The One. As Schindler travels around Europe on his quest, we get flashbacks to various periods of the Life of Beethoven (GARY OLDMAN). These are all tremendously exciting, and feature such things as: Napoleonic meltdowns! evil people who mock the deaf! the Moonlight Sonata! Beethoven familial troubles! drinking troubles! attempted suicide! love-making! and, of course, gorgeous Viennese art and architecture! 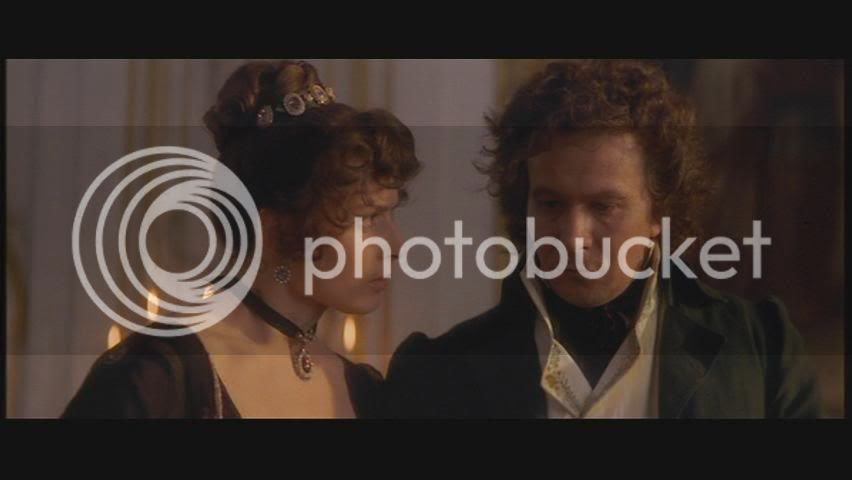 A STRIKING MOMENT OF BOLD ROMANCE! WE LOVE THIS MOVIE! 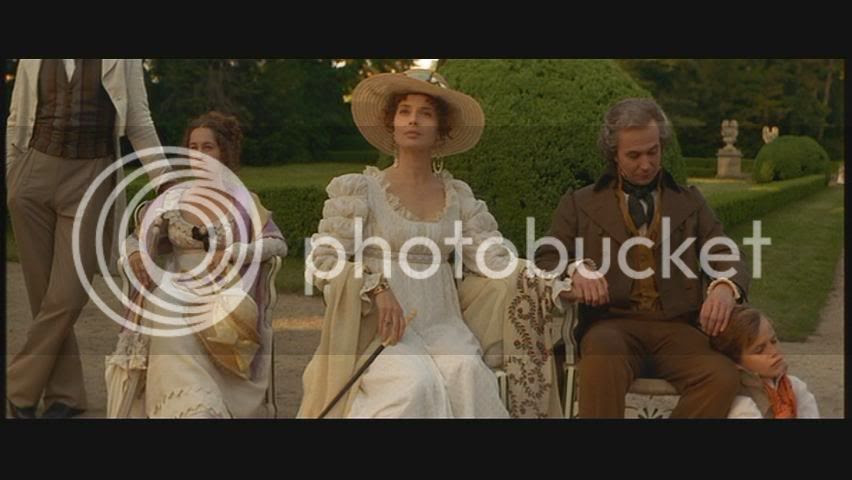 No, Ludwig! Do not favor Karl! It's always the ones we love the most that hurt us!

There are many striking things about this film, but those which stick out the most are the relationship Beethoven has with his ward and illegitimate son, little Karl von Beethoven (Marco Hofschneider). The film's main theme seems to be: Ludwig von Beethoven was a tortured genius. This heady mix of anger and vulnerability is irresistible to some people (the PPCC principle among them), and leads to him inevitably breaking many hearts as he is serially dumped. Like a moth to flames, I tell ya! Anyway, Beethoven's dual nature as a narcissistic, angry ball of twitchy nerves and epic tantrums and a vulnerable, aging and deaf man is brought to full light with the way he horribly treats, and is horribly treated, by Karl. Their relationship is thornier and more touching than anything else in the film. Oh, the tears we shed! When Karl dumps Ludwig, our heart was shattered, our body halved! Our knees buckled with Ludwig's! How could you, Karl?! HOW?!

It goes without saying that Gary Oldman owns this film. It's remarkable to compare his accent (and even octave!) as Beethoven, as compared to his natural Cockney tenor. The man's a chameleon! The filmmaking relies almost entirely on the power of Oldman's performance and the power of Beethoven's appeal, both his music and as a cultural icon. And hey, it's pretty hard not to revel in the glories of mankind when the Ode to Joy is being pounded out by what sounds to be like a million screaming people. It even gets our blood pumping enough that, Buddhist pacifists that we are, we just want to punch someone (or maybe we should lay off the old knifey moloko).

The plot is shoddily whipped together and scenes don't quite flow as they should, making this film - from the cold eye of a wannabe film theorist/critic - pretty crap. Indeed, the similar Amadeus is superior from a technical and brainy perspective. But, just like you could (could) argue that Mozart's music was more sophisticated and therefore "better" than Beethoven's, both Beethoven's music and Immortal Beloved carry that uniquely raw emotional energy that you sometimes crave - technical brains bedamned! We dare you to watch this (or this clip) and remain goosebump-free and heart-whole.

I must admit, my favorite rendition of Beethoven's story is, um, a Kate Beaton comic. Sorry, Gary.

Ah ha! I love it! Gary will understand (this time).

I keep finding out about Gary Oldman movies I've never seen. Thank you for the heads up. I shall revel in its ridiculousness

Even though I did enjoy Immortal Beloved more than I should have -but the music itself is enough of an excuse- I was never bowled over by it.

And I think that despite its "lightness" Mozart's music is more sophisticated than any other composer's I have heard. I like him best - not that I'm an expert or anything.

Beethoven's music has a certain grandeur (and I'm not just talking about the symphony) even his cello sonatas carry a different sort of weight, which would have disturbed me normally, but they are so good that one ends up falling for them in minutes.

Aww, I love Immortal Beloved. But then, I fell in love with it as a teenager with absolutely no critical faculties whatsoever, so I just bliss out on costumes and music and don't even notice the flaws. I know, I know.
In fact, I like to watch this together with Amadeus and Cyrano de Bergerac and have a Marathon of Weeping for Epic Tragic Genius.

Beethoven and love and anger.
Well done,droog .
Must watch