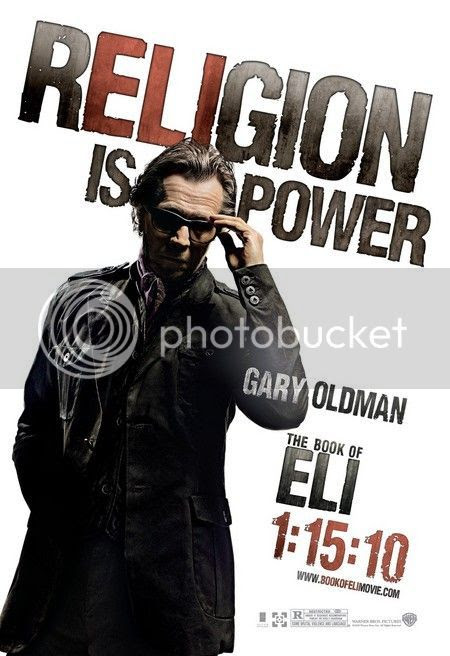 And Gary Oldman is the opium of the PPCC.

The Book of Gary Oldman Eli is a rare treat: an opportunity to see Gary Oldman on the big screen. It is also, for those who fancy them, a post-apocalyptic dystopia about evangelical Christianity. It's not a particularly smart movie - its take on Bible-thumping and the Good Word is earnest but unimaginative - but it is awfully pretty. And that's not just because it's Gary Oldman.

Filmed in a sharp monochrome, we follow the titular Eli (Denzel Washington) as he ass-kicks his way across the wasteland that is post-nuclear New Mexico filmed with a filter. (Paranthetical remark: Honestly, we think the smartest take on Cold War nuclear paranoia was in the last Indiana Jones, with good ol' war hero Indy getting himself blown out of a plastic 1950s model town/nuclear test site by locking himself into a refrigerator during a test. Now that was some clever imagery!) Along with his enormous, Crocodile Dundee knife, Eli carries with him a hefty tome: the movie makes a meager effort at shrouding it in mystery, but it's pretty obvious that it's the Bible. Apparently, after a vague "war" and big "flash" (we see remnants of craters in the desert landscape), all the Bibles were burnt and humanity plunged into a horror of George Miller-meets-Frank Miller. Graphic novel-esque, but not really.

Now, the sadistic leader of a grungy town, Carnegie (Gary Oldman... GARY OLDMAN!), when he's not busy reading Mussolini's biography or burning Anne Frank's diary, sends his henchmen - wielding Nazi pistols, no less! - to get the book from Eli. Why, you ask? Because, as Carnegie says, it's not a book, it's a weapon! Full of dangerous ideas! Such as hope, and forgiveness, and eye for an eye!

But alas, this film is much more New Testamenty than Old, so Eli never gets the chance to bellow, "Eye for an eye, motherfrakker!" while blazing away with his guns and knives. Too bad. He does, however, get to mutter any number of other humorous, comic book-style clichés about kicking ass and spreading the good word. It almost, almost turns into a boring, tamer Frank Miller thing, until this preacherly B-movie remembers its secular roots and aspires to A-grade Brazil/Blade Runner dystopia, mostly through the use of some wickedly atmospheric Vangelis-style wails on the synthesizer. Think the Dune soundtrack, plus that one warbling sob track from Revenge of the Sith, with a healthy dose of the throbbing brass from Dark Knight. We especially enjoyed the meditative aural gloom accompanying Gary's final scenes, vah! Denzel, looking for someone's ass to kick. Or someone to preach to. 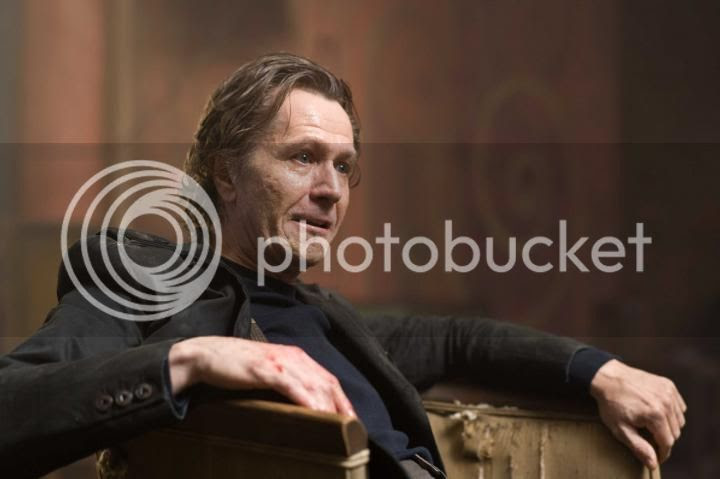 Gary, looking old and rough and villainous and we love you, Gary.

What was this movie trying to say anyway? That the Bible should only be interpreted by the "right" people, "good" people such as Eli of the Big Knife, rather than Carnegie of the Gary? That sounds awfully... elitist and not-Protestant! Which is doubly confounding given how steeped in not-Catholic Christianity this film is: it's all "reading the Bible every day is great!" this and evangelical that. And truly, the filmmakers missed a huge - HUGE! - opportunity to make some interesting points about how a book like the King James would be interpreted in a post-civilization, post-literate, post-Talmudic-commentary, post-Christianity world anyway. Check out Slate's Reading the Bible and you'll see what we mean. The big answers don't really jump out from the page, and it certainly doesn't lend itself to being interpreted in, of all things, a typically American, Protestant, 20th century way. (Surely, that cat isn't kosher!) And what an inadvertent irony, given the film's final revelation about blindness and sight, that Gandhi once said, "An eye for an eye makes the whole world blind!" (Or better yet, Gandhi's, "What do I think of Western civilization? I think it would be a very good idea.")

That's all OK, though. This movie never claimed to be about big ideas, and just because it uses some big ideas as props in its pedestrian plot about Good Ass-kickers and their Vile Villainous Foes doesn't mean it has any responsibility to address those ideas. In the meantime, we can enjoy the pretty! Such as the cunning use of the swirling, monochromatic clouds - horrible-yet-beautiful reminders of a 30-year-old nuclear fall-out. Or the excellent Denzel Washington doing what he does best: being amazingly attractive, as well as indestructibly Noble. Yes, righteous Eli, go! That is, until our sympathies clashed with our ancient and pure love of Gary Oldman. Poor, dear Carnegie - one kneecap blown off, and nothing to show for it but rampaging tantrums and a very bad mood. Can we please start making movies where Gary Oldman is not the sadistic villain, but is instead a sensitive thinker-type? Perhaps a biopic about Ralph Waldo Emerson? The man is a genius at accents, he would just murder (figuratively) the ye olde Bostone twang! Please, universe, PLEASE.

Oh yes, and this movie fails the Bechdel test, though that should hardly come as a surprise. And yes, it's pretty ethnocentric to assume that the Bible (rather than the Qur'an, or the Pali Canon) is the ONE BOOK humans are burning to have again (personally, our money would go on... well, Harry Potter), but whatev. As we said, this movie is more about splashes of blood, Gary Oldman and swirly clouds than anything else. Oh yeah, and speaking of Harry, Dumbledore has a cameo! AND TOM WAITS, OF ALL PEOPLE.

Posted by a ppcc representative at 09:45

Second thought: the villain is named Carnegie? The first name of half the libraries in America? Probably a coincidence, but still ... hmmm...

You sure got a laugh out of me at the last paragraph!