We kind of can't accept that Battlestar Galactica is over for us, and so we're desperately clawing at any possible debris which could have a BSG-related smell to it. Firefly? Hmm, kind of like BSG - only without the war and weird mythological stuff. But it'll do! Bob Dylan? Hmm, All Along the Watchtower is an important part of the BSG mythos. Very well! Hayao Miyazaki? Hayao Miyazaki?!

Yes, the transcendental visions of Hayao Miyazaki have a vague BSG connection in that:


1. Edward James Olmos AKA Old Man Adama voiced one of the characters in one of the films. 2. When we were still watching BSG, we visited a part of Uttarakhand that reminded us of Hayao Miyazaki vistas. Okay, sort of unrelated, but whatevs. (By the way, the Uttarakhand Tourism Board wants you to visit too!) 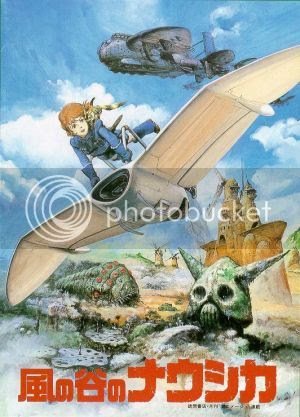 So, here we are, at the shores of Nausicaa and the Valley of the Winds. Before we begin: did you know that Nausicaa is the young princess who finds Odysseus washed up on her island and asks that fine naked man (played by Sean Bean in our head, always) to explain both his nudity and his lack of ship? And so begins his telling of... the Odyssey! Great.

But this Nausicaa is different, and much more Miyazaki-fied: the princess of a small, agricultural kingdom, the Valley of the Wind, she is one of the rare humans who can make peace with the oversized insects which crawl from the Toxic Jungle and threaten to override the little human settlements struggling to survive. One thousand years ago, giant soldiers laid waste to all the cities and took civilization down with it - after these "seven days of fire", a sort of un-Genesis, the Earth's environment was shot to pieces, and the remaining humans made a life clinging to the tiny pockets of land that didn't totally suck or poison them. Now two of the larger kingdoms - Tolmekia and Pejite - are warring over a powerful new weapon, and the Valley of the Wind is caught in between. It's up to Nausicaa, with her badass glider and Pikachu-type thing, to fix everything before Earth is ruined (again). 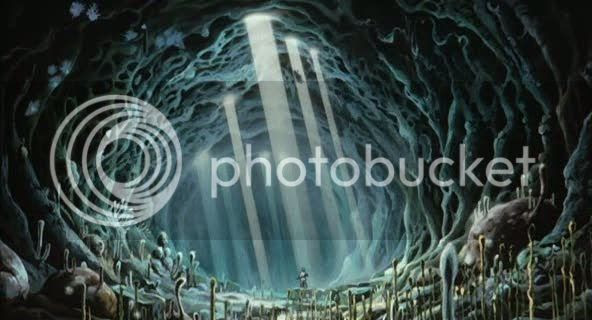 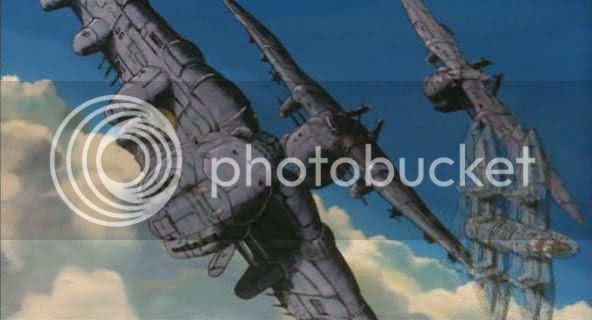 Now, we haven't watched or reviewed a Miyazaki film in a long time, but the fact remains: you've seen one, you've seen them all. But that only means he's an anime auteur - every single film, while resembling the others in its environmentalism, feminism, ambiguity, mysticism and obsession with flight, is an enchanting, mesmerizing variation. The fantastic imagery is so palpably strange and beautiful! Here, we get glimpses into bizarre underworlds of petrified forests crumbling into sand, or rolling hills of undulating grasses. It's absolutely gorgeous!

Apart from being a visual treat, the music is similarly evocative (and sometimes even amusing). Heavy on 1980s synthesizer, it often sounds like a Ray Manzarek solo, though there are moments of such gut-wrenching, operatic emotion - when we arrive at the ruined kingdom of Pegite, for example - that you feel your heart beating in your throat. Yay! 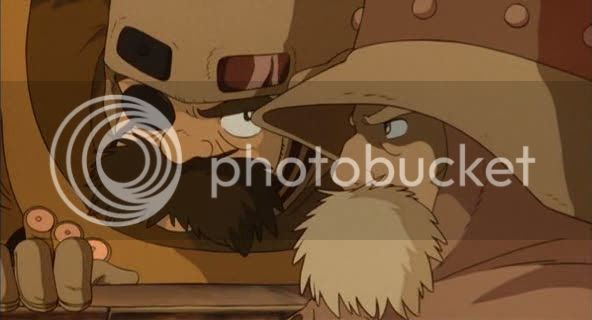 That's Adama on the left, Captain Picard on the right. 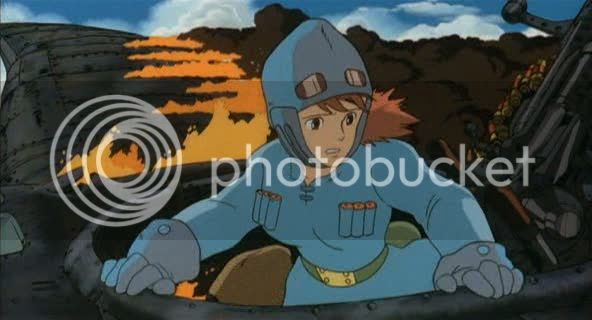 We enjoyed this movie very much and are considering it one of our favorites from Miyazaki's Studio Ghibli. The narrative storms forward with a compelling urgency that is sometimes lacking in Spirited Away or Castle in the Sky; yet we still find time to maintain that air of reflective meditation that characterizes all of his films. The voice acting is fine - Shia LeBeouf's being particularly distracting, but also heartbreakingly earnest - and there was a special pleasure in hearing Adama's voice complain about those crappy Tolmekian ships. Nothin' like the Bucket, eh!? Another enjoyable character was the smug, cartoonish Kurotowa (voiced by Chris Sarandon), who described himself as an "old, lazy soldier" and resembled an aging Lupin (the thief, not the sensitive werewolf) and provided some of the few genuine moments of comic relief.

The film's urgency also extends to the meta level - apart from the obvious environmentalism, the film is a plea for nuclear disarmament. The giant warriors resemble Godzilla in their vibe of post-nuclear mutant beasts, and Nausicaa makes constant demands for the Tolmekian and Pejite communities to lay down their weapons, once and for all. It shows how war ultimately scars the Earth, perhaps irredeemably, and the message is particularly harrowing in a post-Trinity world with very few Nausicaas indeed.

Posted by a ppcc representative at 23:57