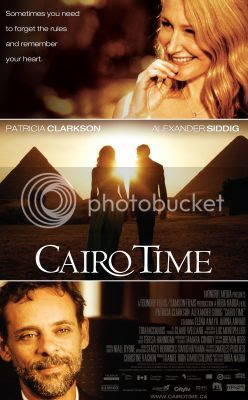 Juliette (Patricia Clarkson), a middle-aged Canadian journalist, is visiting Cairo for a long-planned vacation with her UN staff husband, Mark (Tom McManus). Mark is unexpectedly held up in the Gaza Strip, and Juliette ("Like Romeo and!" a character notes) is stranded in the hotel, so Marc sends his long-time colleague, Tareq (Alexander Siddig), to play host. The attraction between Tareq and Juliette, which is immediate and mutual, simmers for much of her visit - until building to an almost unbearable tension where, if you're like the PPCC, you may find yourself gnashing your teeth, tearing your hair out and begging these characters to just elope, for the love of God!

How many goodly creatures are there here!

But Cairo Time, for all its golden-hued panoramas of sunsets over pyramids, late-night wedding parties and curling hookah smoke, never gives in to the film fantasy urge - and the two star-cross'd lovers must remain firmly grounded in reality. Unlike other doomed couples o' the souq - Bogie and Ingrid, Ralph and Kristen - Juliette and Tareq are doomed by their pragmatism. And it is this realism - that you can't just drop everything and run off with the gorgeous, slinky foreigner, even if there's nothing you'd rather do - that accentuates the beauty and common tragedy of this very plausible love story.

How beauteous mankind is!

O brave new world! That has such people in't!

The portrayal of Cairo is likewise realistic: it is chaotic, majestic decay, and the film shows both the elegance of nighttime Cairo as well as the hassle of being the only white lady in a skirt during the day. Juliette and Tareq engage in several postcolonial plays about Western saviors ("Between you and your husband," Tareq sarcasms, "you may just save the Middle East!"), the dual eroticism (belly dancing!) and sexual conservativism (no short skirts!) of modern-day Egypt, and the hairy problem of romanticizing poverty. But the film is never too cerebral or topical - its main pleasure is the unfolding mature love, and how painfully awkward and achingly beautiful it is to be in the wrong sort of love with a pretty someone from a new place.

The music, composed by Niall Byrne, is an additional pleasure - it sounds like Nicola Piovani by way of Alexandre Desplat, with several tracks by the excellent Egyptian band El Tanbura, as well as some selections from Emirates Airlines' Classical Arabic audio channel to boost up the local feel. We found out about this film by way of the recent New York Times article on breakout performances (that being Alexander Siddig's, though please, he was sexy and wonderful since his days as Dr. Bashir!) and we're very happy we did. Not only are we filthy Orientalists and therefore suckers for romantic sunrises overlaid with haunting adhaans, moody stares over bubbling water pipes and mint tea, and the sun snaking through labyrinthine markets, but we also find love stories about people over 20something very refreshing. Very, very nice.


(the soundtrack)
Posted by a ppcc representative at 11:25