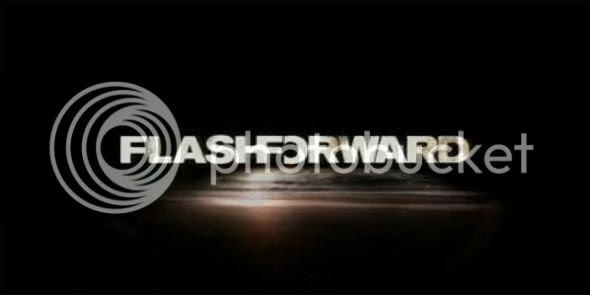 Yesterday, 27 May 2010, there was another casualty in the war of Sci-Fi versus TV. The promising new show FlashForward has been cancelled by ABC. Now it shall make its way across the river Styx and into the TV show graveyard, that solemn underworld where, if it's lucky, it will develop into a small cult. So it was with the now-legendary Firefly, so it shall probably be with Caprica. Need we remind these impatient, Nielsen-hungry execs that M*A*S*H, God of Television, had very poor ratings in its first season? Or that no one watched Star Trek until it was cancelled? 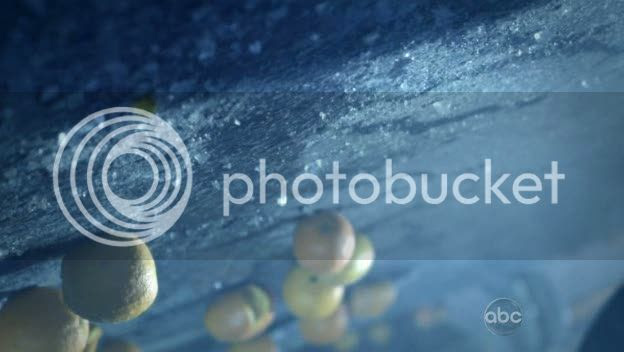 FlashForward comes with a fun, frothy premise - to be discussed below - and a sparkling pedigree from the pantheon of geekery (Sulu 2.0! Gaius frakkin' Baltar! Merry Brandybuck!), but even these assets couldn't save it yesterday. So be it. If we're lucky, all N of you who read this blog will tell N of your friends, and the FlashForward fanbase will grow exponentially until, at worst, we get a movie to tie up all the loose ends or, at best, the SyFy Channel picks it up. 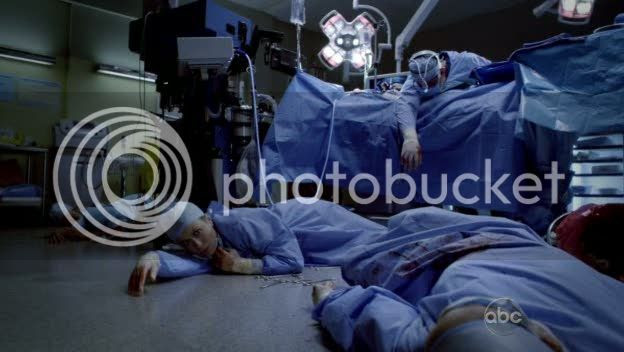 Reminiscent of an early panel from the excellent Y: The Last Man. 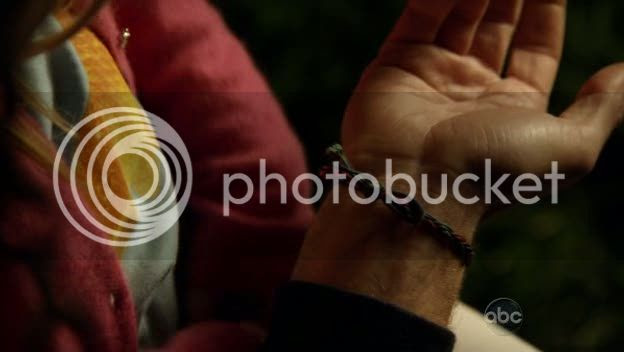 The ties that bind.

One day in downtown Los Angeles, recovering alcoholic and FBI agent, Mark Benford (Joseph "Will Shakespeare" Fiennes, brother of Voldemort), lost consciousness for 2 minutes 17 seconds while at the wheel of his big FBI jeep. Unbeknownst to him, everyone else on the planet also lost consciousness and, in a shared reality-bending mindfrak reminiscent of the glorious Y: The Last Man's opening number, everyone wakes up in topsy-turvy WTFville. Because in those 2+ minutes, humanity experienced a "flashforward" - a hippocampus-tickling memory of things yet to come. To put it more plainly (as the characters often do), everyone's consciousness jumped forward six months, to April 29 of the following year. And while Mark struggles to mend all the broken cars and exploding buildings that the shared blackout induced (insta-dystopia!) in this part of the timeline, he - as well as his partner, Demetri Noh (a badass John "Sulu!" Cho), his wife, Doctor Top Lady (Sonya Walger), his AA sponsor, Aaron (Brian F. O'Byrne), and others - must struggle with the unsavory fate he saw, hence raising that old Oedipal concern: how do you hoodwink your destiny?

By playing into its hands, of course! And who doesn't like a little self-fulfilling prophecy baked in sci-fi sauce? 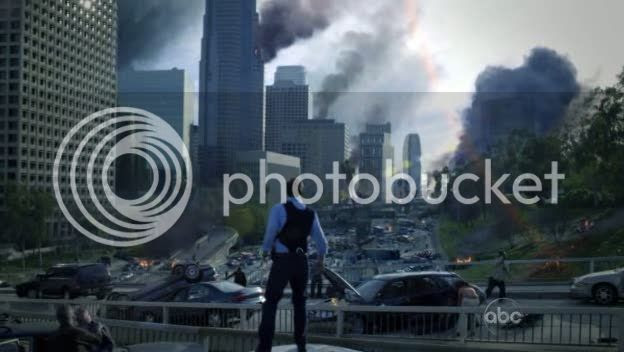 From here to dystopia in under three minutes. 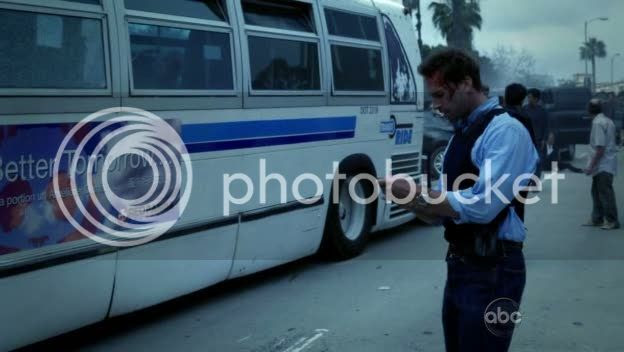 Not, oddly, the first time we see a director trying to be clever by using a bus ad in a TV premiere this season: see the final few minutes of House's "Broken".

Like the exquisite first season of that old 90s classic, Sliders, FlashForward gives us a premise which is just lightly mind-bending enough to be a perfect ending to a day's hard slog at the office. This is distorting the time-space continuum in an easy, fun way, a way that doesn't require you to think about paradoxes and multiple dimensions too much, and with none of that hardcore sciencey stuff of Primer, Michio Kaku

. Mark, who saw himself wearing a "silly friendship bracelet" and - more horrifically - drinking, spends much of the episode anxiously assuring his loved ones that whatever was seen in the flashforward is not necessarily guaranteed to happen. But when, in the final scenes, Mark's daughter, unable to sleep, climbs into his lap and offers him that very bracelet - how can he but accept the first domino push? And how can we at the PPCC not get all giddy and goosebumpy with vicarious thrills?

This premise is strong enough to cover up for some questionable dialogues as well as Joseph Fiennes' incredibly distracting American accent (it's good, just really distracting; talk properly, man!). This is no Battlestar Galactica, with its urgency and political concerns and wonderful frakkin' Tigh, nor is it even Firefly-quality. It's too serious and not smart enough. But it is like a really good Quantum Leap episode, and who didn't love Quantum Leap, deep down in their hearts? No frakkin' one. So please help save this rejected show!

Posted by a ppcc representative at 01:51

I adored the series premiere. I grabbed everyone I knew and begged them to watch this show. And then... the rest of the season happened. I stopped watching by episode 9. It was SUCH a waste of potential. I'm still bummed about it.

I do not like Joseph Fiennes. I didn't like Shakespeare in Love and I certainly didn't like Killing Me Softly (I watched it only because it was directed by Chen Kaige - who turned out to be two hits wonder afaic - and JF was even worse than the film itself.

So as soon as I saw him as the lead I never even glimpsed at it. I know I would be distraced by getting annoyed at his self aware acting (his bro on the other hand is entirely different matter, not good looking but a good actor - my fave performance of his is in The White Countess)

But I can sympathise with following a show only to find out that it is cancelled after one season. It is not a good feeling.