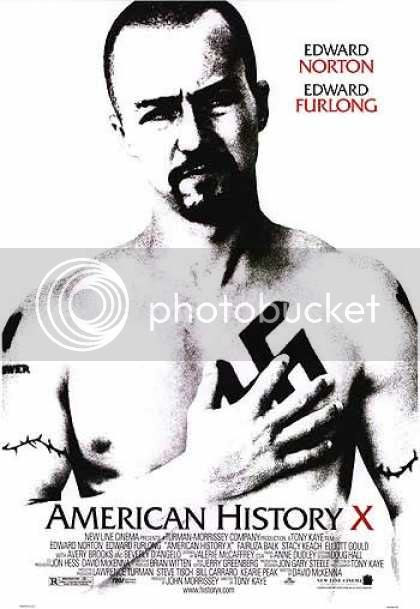 From its first to its last frame, American History X is riveting. It confronts a provocative, unappealing subject - neo-Nazis in America - with power and intelligence. While it's not a perfect film - there are frequent moments of stilted dialogue and so-so acting - it's definitely a punch to the gut.

Jumping between the Past and the Present, the story takes place in Venice Beach, CA, where rival gangs - almost always race-based - compete for turf. But the scope is narrower, with less pageantry than West Side Story and less archetypal "intelligent young man beats the mean streets" than A Guide to Recognizing Your Saints. American History X is about cultivating hatred, often over generations, and how rage can "switch off your brain". After their father's death, brothers Derek (Edward Norton) and Danny (Edward Furlong) gravitate more and more to the burdgeoning skinhead movement of Venice Beach. While younger brother Danny is just happy to do anything Derek does, Derek finds in the skinheads a perfect outlet for his rage, frustration and feelings of helplessness. Everything can conveniently be defined according to narrow racial (and just plain racist) terms. (These scenes are also, of course, filmed in black and white.) Derek is also articulate, intelligent and charismatic; he becomes the perfect "prince" of the neo-Nazi movement. 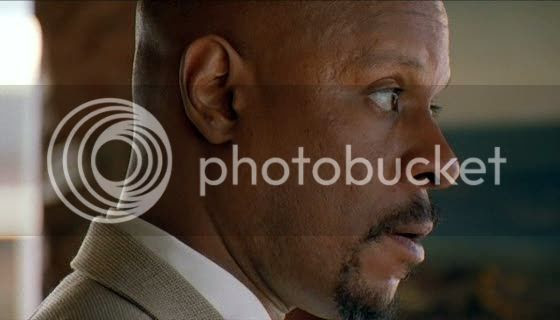 Avery Brooks is great as the high school principal and surrogate dad to Derek and Danny. 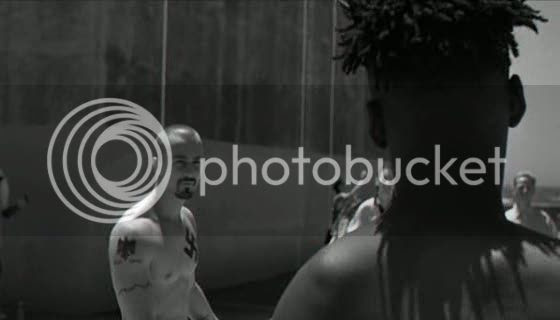 Using black and white to heighten the whole extremism/racism stuff.

One night, Derek murders two African-Americans who are trying to steal his family car. Charged with manslaughter, he is sent to prison for three years. Meanwhile, Danny slips further and further into the skinhead circle. When Derek is released, radically rehabilitated, he finds it tricky to navigate the old neighborhood while distancing himself - and Danny - from the gang.

On paper, this all sounds quite cliché. But movies about gangs and youth violence, while they demonize the gangs, also treat the circumstances of their conception with great sympathy. Neo-Nazism, however, is repugnant to everyone. And it's hard to sympathize with poor, frustrated whites, even if their socioeconomic struggle is just as authentic as anyone else's. This film has the hard task of acknowledging the hate-based and racist ideology of white power gangs while simultaneously maintaining their humanity. It works, to some extent, mostly via Edward Norton's performance as Derek. The other gang members - such as Ethan Suplee as Seth, or Fairuza Balk as Derek's girlfriend, Stacey - are little more than caricatures to be reviled. Danny is likewise superficial: he is Impressionability embodied, with his wide, angelic eyes (frequently filmed turned upwards in reverance to Derek) and his faux cynicism, like the baggy clothes he wears over his small, skinny frame. 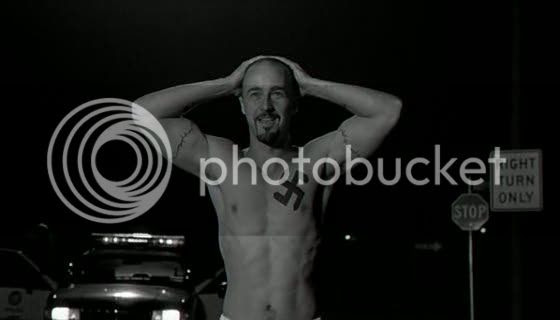 One of the film's iconic images. A very scary Ed Norton. 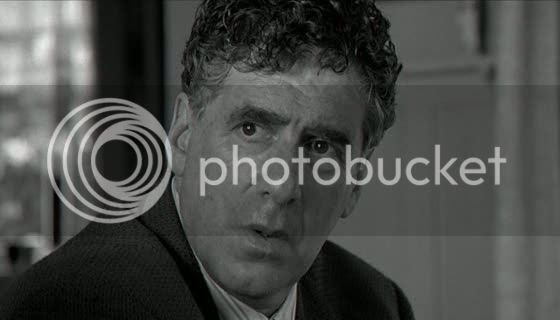 There are a lot of scenes of brutality in this film, but one of the most understated and most powerful is watching poor, sweet Elliott Gould weather a boy's increasingly wild anti-Semitic ranting. Incidentally, we love Elliott Gould.

Derek, however, is a strange beast, and he is the heart of the film. And it's Derek's perverse charisma, his moments of rage and his moments of change which are so compelling to watch. Ed Norton is a great actor, and he manages to encapsulate the worst of neo-Nazism in a character who is also, essentially, a young man trying to be the father of his family. It's amazing to watch the radical changes he undergoes. And they never feel forced or inorganic.

There are several sequences which mark the character of Derek, and they're all tearjerkers. Elliott Gould (who is not in this film enough! and needs to be in more movies, period!) has a small part as one of the local high school's teachers. In one sequence, he's over for dinner - earlier in the film, there were some vague references to an aborted relationship between the widowed mother and Gould. Everyone at the table is talking about Rodney King, and Derek, at the peak of his skinhead involvement, unleashes a racist tirade about liberal agendas and affirmative action. Things begin to spiral out of control, and what begins as a slightly funny scene for Gould (the Family Dinner-Date from Hell!) quickly becomes seriously horrifying as Derek levels his anti-Semitic sights on Gould - who is Jewish but, more obvious (to everyone but Derek), someone encroaching on his father's space. Watching Derek getting more and more wound up, as well as Gould's resigned disappointment and embarrassment, is heartbreaking. 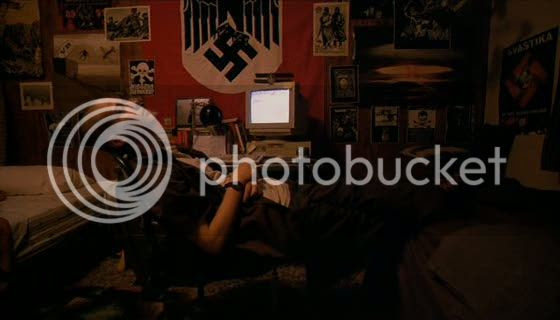 And that's one of the easier sequences to handle! In fact, this film rightly earns his R-rating, for its (albeit brief) moments of extreme violence, abundance of racial slurs, and generally depressing theme. But don't be scared away! This is a great film.

Posted by a ppcc representative at 21:15

Edward Norton earned a fan in me with this one. It is a good film but elevated by the performance. With a lesser actor, it wouldn't have been this worthy. This is a mighty high arc to portray and Ed did it perfectly.

Luckily this was not a one hit wonder. He continued to be perfect an actor in every role of his (I even love the film he directed)

This is SO not my kind of movie (i.e. not a ridiculous slasher movie made for a few bucks)...however, I loved it. Norton is just incredible...he was never better and totally deserved an Oscar.