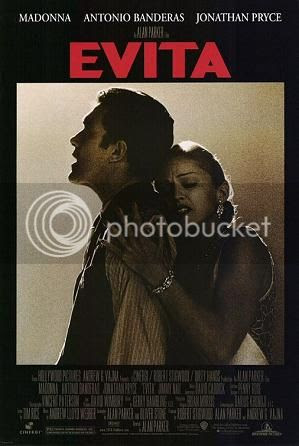 One of the most curious things about the film adaptation of Andrew Lloyd Webber's Evita is that nearly all the scenes featuring Political Power, such as the famous "Don't Cry for Me Argentina" moment, are filmed off-balance.

The rise of the Peróns; the tilt worsens.

It's a clever visual reminder of both the delirious heights Eva and Juan Perón find themselves in by the halfway mark of this movie, as well as the unsteady base they've founded their power on. It's a castle built on quicksand, and - amid the eerie, minor-chord chanting of "Perón! Perón!"/"Eviiiita!" - the spotlight reels drunkenly and the framing is permanently off-kilter. This famous sequence is then gloriously bookended by "And the Money Kept Rolling In (And Out)", which is a montage of the Perón government hemhorraging funds - into hospitals, into infrastructure, into bread and circuses and their own pockets.

A confession: we watch Evita with the same regularity that some people go on holiday. We kinda like it. (Kinda big time.)

Our favorite "oligarch". We look out for him in all the snobby, rich people numbers!

Though when the chorus sings as a big crowd, or line of military drones, it's scary.

For economists, Argentina is a strange beast. One hundred years ago, it was poised to be one of the next great powers, growing fast and making money. By the 2010s, it had fallen far below that potential. And in between? The Peróns. (Okay, and a lot of other stuff - like the crisis in 1999 - but saying "The Peróns." sounds a lot more dramatic and exciting.)

Yet this musical acknowledges the magnetic charisma of Juan and Eva. Following Eva Duarte (Madonna), who later became known by the loving diminutive "Evita", as an ambitious social climber, we begin in the poor town of Los Toldos, quickly move to the heady nights of Buenos Aires as Eva sleeps her way onwards and upwards, eventually landing in the bed of Juan Perón (Jonathan Pryce, in a big fake... nose). Perón, an influential military man, is slowly making his way up the ladder as well. They agree - in the jazzy number "I'd Be Surprisingly Good For You" - to team up, and, well, Jonathan Pryce and Madonna are an unlikely and unexpectedly hot duo.

Or so think the screaming crowds (and the PPCC), who - as governments topple, riots break out and buildings burn down - catapult the Peróns and their new, labor-friendly rhetoric into the Casa Rosada.

This film is all about glory, legends, cynical politics, big promises that kind of ambiguously follow through, and, of course, crowd control. So it's a lot like Webber's other PPCC favorite, Jesus Christ Superstar. As in JCS, the mob - amorphous, impatient, demanding and, above all, LOUD - is more than spectator. It is the important third character, getting in the way between the Father and Son, between Juan and Eva. If we were Žižek, we'd say it was the id to Juan's/God's superego and Eva's/Jesus' ego - the mob is unmanageable, impulsive, dangerous and hypnotic. It is the ugly, scary, Dionysian part of being human.

Juan and Eva as the superego and ego, respectively, trying to manage...

(Note: these two moments are separated by practically the entire film. Such is the genius of the editing.)

In Evita, that crowd is also represented by none other than Ché (Antonio Banderas, not a cat here), ultra-popular populist icon. Ché is forever pushing and shoving his way between people, getting beaten up by policemen, standing in factory lines, gazing cynically at the lather everyone is frothing around in. Literally, he stays grounded. And so often voices Jiminy Cricket-like asides, meets Eva in dreamscapes where they discuss what the hell she thinks she's doing, and sometimes - for the help of those ignorant of Argentine (Argentinian?) history - summarizes things.

Ever since reading about Pablo Escobar building hospitals in the marvelous Cocaine: A Definitive History

by Dominic Streatfield, we've been interested in the politics and economics of Latin America. However, since we spend most of our spare time these days updating this blog, it keeps getting pushed down the list of General Things To Do. Can anyone suggest a good primer on, er, modern Latin American history?

This guy getting torn down in Parliament reminded us of Italian parliament, circa 2008!

About the impact of the film. Well: as we said above, we watch it a lot. It's one of our favorite things (apart from packages wrapped in brown paper tied up with string). When Madonna tells us not to cry for her, we do - oh, how we do. It's a spectacle. When Jonathan Pryce's vibrato voice bellows into the microphone - "Arrrrgentinos! Arrrrgentinos!" - we get goosebumps. "Descamisados! Mis companeros!" Webber's music is as easy and Puccini-fied as it's always been. Transferring the musical from Broadway to film naturally lost some of the excellent original cast - Patti LuPone as Eva and poor, beautiful Mandy Pantinkin (!) as Che - in favor of bigger names. Madonna is fine, as is Jonathan Pryce - duh, they're professional singers. Antonio Banderas strains a bit, but he makes up for it by playing an obese cat 14 years later (so funny! so cute! oh, fat cats lolz!). We try to dress up our long-simmering, low-fi crush on Jonathan Pryce by saying that we like him because of Brazil, Terry Gilliam's 1980s dystopian classic. We reckon that sounds cooler than admitting that we just think he's sexy in an arched eyebrow, vibrato, Welsh way. In a big fake nose way.

Now someone Christian Dior me! Lauren Bacall me! Machiavell-me!

Posted by a ppcc representative at 22:05

I have never seen this film. And it's interest, because if it had been made a decade or so earlier ...

Let me put it this way. In 1984, when I was 12 years old, I was thoroughly obsessed with two things: Madonna, and the original Broadway cast recording of Evita (Patti LuPone and Mandy Patinkin). I used to spend hours in my attic hideout playing the records and singing along, imagining I *was* Madonna reprising this role.

The very idea of uniting these twin passions of the young me gives me shivers.

And yet, when it actually happened, it was far too late. The bloom had long since gone off my rosy childhood crush on Madonna, and I was too much of a purist to even want to hear Madonna's (let's face it) thin, undisciplined voice sullying the perfection of those songs - few can touch Patti LuPone's pipes, in my book.

I still love that original cast recording as much as ever; I listen to it several times a year and can still sing along every single note. (It's more opera than musical; the recording is the complete show, there is no dialogue missing. I don't know whether the movie was produced this way.) So I'm glad to hear you like the movie so much. I probably still won't see it, but it's good to know it has redeeming power and isn't a complete travesty.

Filmi Geek - Hello and good to see you 'round these parts again! I completely understand your reluctance to see the movie if you love/know the soundtrack well. I only heard the Patti/Mandy/et al. people once or twice, and otherwise grew up on the film. The movie has changed very, very little from the original show - i.e. still no talking, except they changed the Casa Rosada stuff to actual speechifying (which I prefer to that metronome-like pseudo-singing in the original). I can't help saying you should give it a shot, if only for compare/contrast!