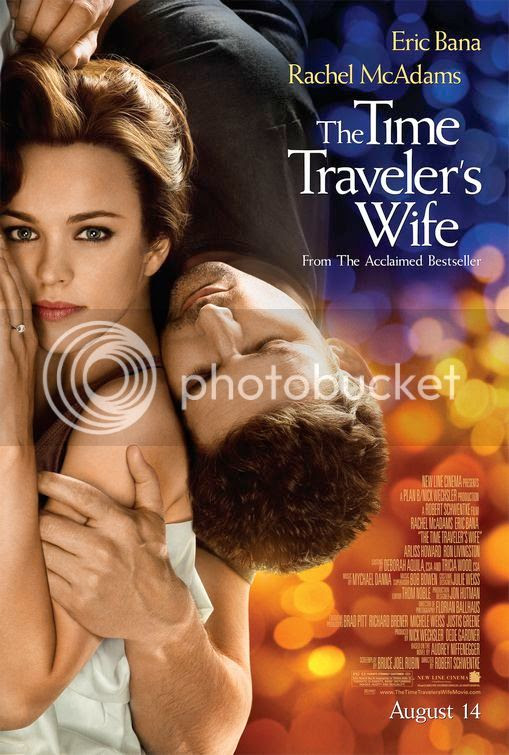 For a movie about leaping around the time-space continuum, The Time Traveler's Wife doesn't really go anywhere. We mean that both figuratively - no narrative arc, no challenge, no resolution, no point - and literally - the time traveler always revisits the same moments in his life, over and over again.

, and unfortunately much of the book's lack of substance is transferred onto the screen. It's like a Pringles tube. You eat and eat, but never feel satisfied. It takes a very promising idea and does nothing with it. But the idea is interesting, if familiar, enough to make you want to see this particular permutation through. We remember reading the entire 546-pages in one feverish afternoon. But in the end - we felt swindled out of our time. "So what?"

Henry (Eric Bana) is your pretty standard bobo, with his family angst (Mom the opera singer died in a freak accident, Dad the concert violinist drinks so much he has the DTs), punk/post-punk tastes (Joy Division as performed by Broken Social Scene!), arty friends and love of jogging. He lives in Chicago, too! Daaaa trendy. Henry's also got a weird genetic disorder - "chrono-impairment" - that means he is occasionally flung backward and forward in time, landing naked and bewildered. These jumps can last seconds, hours or even weeks, and Henry has learned to live with them. He's now an ace at breaking into stores, stealing clothes, and finding shelter.

The time-jumps also always center around certain significant events or people in Henry's life. An obvious moment is Mom's accident, but another oft-visited node is Clare (Rachel McAdams), the love of Henry's life. Clare is the titular "wife" and, since she was six years old, Henrys of various ages have come to visit her in the field behind her house. She fell in love with her husband before the first date.

And that's basically it. Henry lives, Henry loves, Henry time travels. Henry is greatly inconvenienced by his time traveling, but... that's all. Henry and Clare happily adhere to their predetermined fates, not worrying too much about free will (though they pay some lip service to it) or paradoxes.

Worse than its superficiality is the film's (and the book's) hypocritical hipness. In one scene, Henry warns his father that Clare's dad is "a Republican" - oh no. Gomez (a wasted Ron Livingston) is seen walking out of a Pavement concert. And everyone is artistic and has great taste. But doesn't being alternative and hip mean, you know, challenging the conservative status quo? Instead of, uh, propagating it? Because the Time Traveler's Wife is fundamentally and insidiously patriarchal (if the title doesn't give it away or anything). Clare's life revolves entirely around Henry: his problematic time traveling, his fate and his desires. She (literally) is taught as a child that she will fall in love with him, and so she... just does - grinning like an idiot the whole time. Her main ambitions in life - meeting Henry, marrying Henry, having Henry's child, holding on to Henry - provide the merest whisps of narrative urgency in this pointless exercise. While Henry nobly tries to emancipate Clare - "I don't want you to spend your whole life waiting for me!" - the final words of the film are Clare's: how she likes to imagine that he's there, in that field, all the time, even when he's not.

Woman! Get a life!

Sci-fi romance is probably our favorite genre, but it seems like it's very hard to get right. Sci-fi has traditionally been very male-centric, and this story - despite being written by a woman - suffers from that old problem. Clare doesn't really exist apart from Henry, she has no real personality except the one that she performs for Henry's benefit. We get no sense of Clare's (or Henry's, for that matter) individuality. Furthermore, the two seem particularly brainless for not making even the slightest attempt to question this great, looping paradox they're living in. They love each other... because in the future they love each other? At one point, we wondered if this film (and the book) was some sort of existential nihilist thing - give man new powers and perspective and he still falls into the comforting patterns, remaining ignorant of the whole Point. But that's probably giving this too much credit.

Overall, it's the kind of thing you have trouble not watching - it's so shiny and full of potential - but it's pretty much rubbish. At least Benjamin Button, which was a similar flatline plot, was trying to get a point across.

Posted by a ppcc representative at 21:35

I don't know if you watch Doctor Who or not but I find a lot of your discussion about why you disliked this relevant to the current season of Who...

I completely agree to every word. (except that it took me more than afternoon to finish The Time Traveller's Wife, man that book was frustrating, the last thing I expected looking the synopsis was a Mary Sue)

I watched the film one afternoon on TV and it is such a waste of Eric Bana and Rachel McAddams and a great subject. Terry Gilliam is the name that comes to mind when I think how would the idea be done right.

eliza bennet - Ha! I agree that Terry Gilliam might have saved this. But a lot of it is Audrey Niffenegger's fault too.