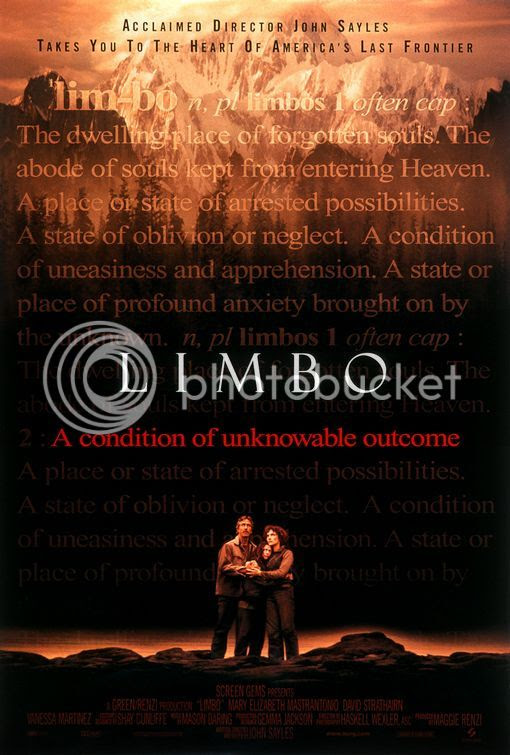 Oh man. We forgot how incredibly good this movie is.

Limbo, a moody, intelligent film by John Sayles, is set in present-day Alaska. The state stands in for Limbo itself - if you define Limbo as a state of in-betweenness that goes on forever and ever. Because Alaska is struggling between its past and its future (with a present that tries to market one to the other), between being a frontier to the existential vacuum (visiting retirees and drifting non-people populate the state, and murder-suicides occur regularly "when people get too bored") and being a real home, a place to settle. What it most certainly is not is definitive.

This state of floating, anxious in-betweenness extends to the characters as well. Donna de Angelo ("woman of the angel", an excellent Mary Elizabeth Mastrantonio) is a lounge singer living in her own purgatory - too good for total obscurity, not good enough to make it big, she lives a non-life traveling around the country and singing in anonymous bars. Her dark, teenage daughter, Noelle (Vanessa Martinez), grudgingly accompanies her. When the de Angelos meet "Jumpin'" Joe Gastineau (David Strathairn), both are smitten. And we learn that the perpetually cautious and, well, jumpy Joe is drifting along as well - wounded from long-festering survivor guilt, he broods as a dark fixture at the town's main bar.

Limbo, the film, is presented in two distinct acts. The first act is a complex, layered (and often very funny) introduction to the characters and the world they live in. Sayles layers cross cuts over each other, playing with dialogues to create one strange, cohesive monologue about the State of Alaska (which might as well be the State of Being, considering how existential the story is). The scene in the bar, with all the seemingly unrelated conversations, is a great example of this. Also weaving in and out of this noise is a tour guide, who serves as a Greek chorus. When Joe's half-brother, Bobby (Casey Siemaszko), and his dubious drug dealing past show up, the tour guide walks by telling her retiree audience (and us) about "desperate men" that come to Alaska, ready to kill and be killed.

The second act has its own Greek chorus as well - now embodied in the mysterious, 19th-century frontiersgirl diary that Noelle finds, once she, Donna and Joe end up stranded on a remote, uninhabited islet after a very, very bad mix-up between the Gastineau brothers and some other drug dealers. Noelle reads from this diary every night, and the parallels between the previous inhabitants - a family of three, scraping out a frontier life by fox pelting - and the current trio are obvious to the point of being blunt. That bluntness is OK, though, because of how poignant and universal the feelings are. Joe, Donna and Noelle may be literally stuck in a suspended state of existence, a no man's land, but we are all prone to existential angst and asking the big questions. Why? What?

The movie is ultimately philosophical, but it can easily be enjoyed as a quasi-satirical, Altman-esque character piece of America's forgotten corners, as a touching romance between Joe and Donna, and as a Cast Away-type survival adventure. The three leads are very strong. Mary Elizabeth Mastrantonio is charming, vulnerable and, frankly, amazing when she belts out those bar tunes. David Strathairn's "tall, dark stranger" persona is very well-used - he seems perpetually uncomfortable, visibly tormented. And Vanessa Martinez was great - it's so rare to see teenagers (and teenagerdom) portrayed intelligently and realistically, without caricature.

Posted by a ppcc representative at 10:36