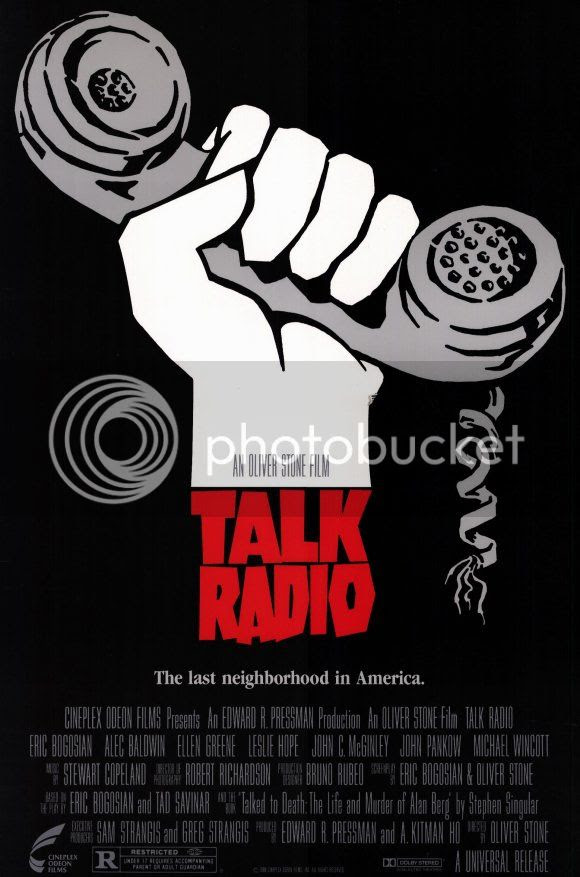 We don't know much about freedom of speech. Which probably sounds funny, given that we regularly air our views on a globally visited website for fun. But seriously - we don't know much theory about it. We know there are rules against hate speech, and there are rules against yelling "Fire!" in a crowded movie theatre, but we've never really explored it.

Talk Radio, the classic play-turned-movie written by and starring Eric Bogosian, directed by Oliver Stone, explores one of America's most frequently used self-descriptions - a land where free speech exists. Misanthropic, self-loathing, sarcastic and genius Barry Champlain (Eric Bogosian) is a "shock jock" on a local Dallas, Texas, radio station. He periodically belittles and humiliates his late night callers - and indeed his callers run the gamut of society's detritus: rapists, neo-Nazis, drug addicts and idiots. The show - Night Talk - is insanely famous, if only for being provocative, Barry is very rich, and now, thanks to the efforts of his eager exec (a young Alec Baldwin), Night Talk is about to go national. Barry receives this news with a mix of outrage, horror and elation - frantically, he calls his ex-wife, Ellen (Ellen Greene), to come to Dallas to visit him.

Talk Radio reminded us, in tone, of Frank Miller's visions of America: it is a post-industrial wasteland in every sense of the word. It is morally bankrupt, alienating, sinister, dystopian, disgusting and very, very vapid, populated entirely by stupid sheeple who subsist entirely on pornography and violence. Homosexuals, feminists and non-whites are periodically bashed by the multitudes of narrow-minded bigots (minions of the Man, I guess) - and those bigots are in turn hated by Barry (or Frank Miller's gloomy superheroes), who acts as a sort of court jester.

It's not really how we see things in America or elsewhere, and we even have some beef with this sort of mainstream misanthropy (which we'll discuss in more detail below). For now, suffice to say that we can take it in small doses and only if done in certain ways - e.g. by telling ourselves this must be what it's like in Dr. House's brain. And like all good Angry Young Misanthropes, Barry is funny. His jokes are scathing and rapid; they yoked shocked barks of laughter from us, or else they just left us bewildered by the sheer audacity. "How do you dial a phone with a straitjacket on?" he demands of one caller. "I don't care what you think!" he tells another. "No one does!" Often, he just hangs up on the person mid-sentence, mid-sob, mid-scream.

The ultimate message seems to be about the inherent dangers of free speech - evil bigots might try to violently shut you up, after all - and, therefore, the inherent disappointment we should have in ourselves with wasting our precious right by filling our minds and airwaves up with vapid nonsense. "What do you want to talk about?" Barry demands, spittle flying. "Baseball scores? Your pets? Orgasms?" When people in America, China, Cambodia and everywhere have fought and died for free speech shouldn't we honor that by… well, not wasting it all on pap? (Okay, we did feel a pang of this disappointment when we saw someone mention on a tech blog about how all our bandwidth gets choked up by Lindsey Lohan videos being e-mailed around.) Even as Barry claws towards success (and there's a great extended flashback which shows his meteoric rise as a shock jock), he is horrified that he should be so popular: in one memorable monologue, he rages at this popularity.


Yes, the war is coming! Yes, the world is shot to hell and you're all goners! Everything is screwed up and you like it that way!

This may as well be Barry talking directly to us. "You're fascinated by the gory details!" he screams. And it's true, we are. This movie is full of gory details - and you couldn't help but watch it.

In fact, this ironic/not-ironic hypocrisy of making a film about free speech's importance where the main speech freer meets a sorry end is endemic to the entire history of the play. There's a weird, Brechtian interplay between Barry versus his listeners, and Barry versus us. He is criticizing us; we may be nodding in sage agreement that bigots are bad and we shouldn't waste our airwaves on them, but here we are… wasting our airwaves on hateful people getting humiliated.

But the weird interaction between reality and the play goes deeper than that. This was a play based on a real event which was based on a fictional novel. It gets even stranger. When the play was revived on Broadway in 2007, several of its advertisements were censored. The feedback loop between Life and Art never seemed so narrow.

(A more detailed explanation of why we don't like Mainstream Misanthropy, as exemplified - to an extent - by this movie and - to a larger extent - by Frank Miller's and Alan Moore's graphic novels, such as "The Life and Times of Martha Washington" and Watchmen: why are homosexuality and feminism always equated with the end of society? This is almost always spouted sarcastically by, we are meant to believe, an indignant hero who is not homophobic and patriarchal. But we think that just by normalizing this language as "one of the typical reasons 1980s society was seen to be going down the tubes" is even dangerous in itself. You can't always expect people to detect the facetious!)

Anyway, this is definitely recommended - it's a challenging, electrifying piece.

Posted by a ppcc representative at 14:23