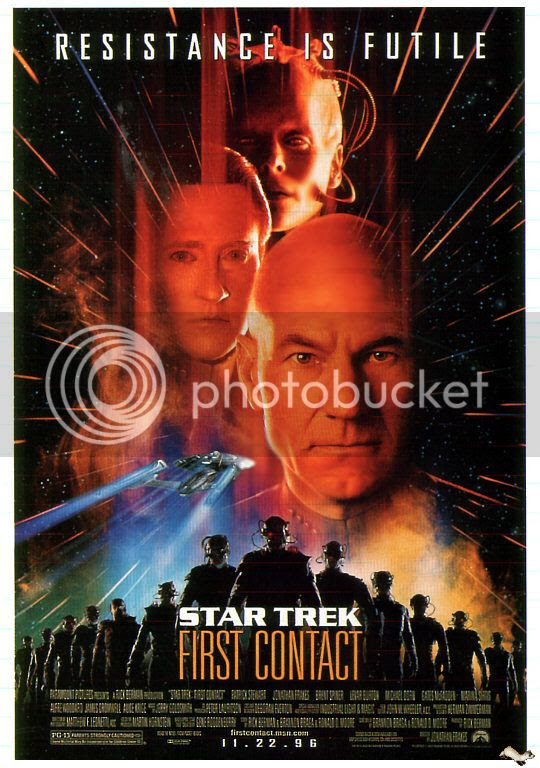 Star Trek: First Contact is a glossy, mediocre-ishly OK film featuring Picard et al. as they battle the mindless, roaming Borg. It's not as fun as Kirk et al.'s Adventures (particularly this one and this one), but it is decent.

The story begins with Captain Jean-Luc Picard (Patrick Stewart), chillin' out on the starship Enterprise, havin' nightmares of becoming yet another brain-dead Borg drone - a fate he narrowly eluded six years ago. For those who are unfamiliar, the Borg - or, as we prefer them to be called, the Borg Collective - are basically a beehive in space. There is the Borg Queen (Alice Krige) and there are her cybernetic slave drones who share a single consciousness and build stuff or kill things in order to advance their common Borgly cause. The cause is a simple one: the Borg Collective (which is now starting to sound like an art movement) roams the galaxy in search of civilizations; when they find one, they absorb it into the Collective, adapting that civilization's best offerings into theirs and assimilating its members, until everyone becomes one big soupy convoluted mish-mash of the culturally Darwinnist-defined best. (See?) Picard is totally not down with them. The PPCC sort of is (what! we think they make a lot of sense!).

When the Borg attack the United Federation of Planets, Picard has a flip-out and drives the Enterprise straight into battle, where he blows up a Borg space cube (did we mention the Borg have cool design ideas too?), and then pursues a fleeing Borg space sphere into a time-traveling wormhole, which takes everyone all the way back to the 21st century. This is the same century in which Earth was a dump and Zefram Cochrane (James Cromwell, kinda looking like Brianosaurus+20 years), famed physicist who discovered warp technology, launched his first warp drive and made first contact with a passing alien race. To ensure that (1) Earth doesn't go Borg ("Sounds Swedish," one character notes), and (2) Earth warps and meets aliens, Picard kicks Borg ass up in space while foxy second-in-command Riker (the foxy Jonathan Frakes, who also directed) befriends and inspires Zefram to continue along the thing history says he was supposed to do anyway. Oh yeah, and Data gets kidnapped into an extensive Pinocchio S&M sex fantasy with the Borg Queen - it was very green porno (hey, it's just WHAT BEES DO), even including the whole parts-falling-off bit!

So. Convincing scientists to use a warp drive is definitely less funny than trying to steal a whale from the San Francisco aquarium, and, for that reason alone, this film suffers. Second, while Picard's unhealthy obsession with being totally Not Borg is likened to an Ahab-style quest, and he even goes on to (mis-)quote OUR FAVORITE PASSAGE from the book itself - bursting hot heart mortar shells and all - the perverted drivenness isn't really captured in Patrick Stewart's admittedly fine acting. As fine as his acting was, it still lacked that off-center passion that drives men like Ahab (and, to an extent, Kirk or McCoy) - Picard may roar and rage and smash up his starship trophies (what was up with that trophy case, by the way?), but he's terribly predictable.

So the film lacks heart, to sum it up. Oh well! Anyway, it was crazy to see John Sayles alumna Alfre Woodward shoving Picard back into line, much in the same way she whipped the wheelchair-bound alcoholic ex-soap star played by Mary McDonnell back into shape in Passion Fish. And it was always a delight to see foxy Riker's sparkling blue eyes, or Geordi's (LeVar Burton) sparkling cyborg blue eyes - though, again, they don't hold candles to McCoy's sparkling blue eyes, which burn with the fire of indignance and the flames of righteous humanistic hard-edged passion. These new kids just have no personality, in comparison!

And now - Internet memage! The (in)famous original "The line must be drawn HEAH!" scene, one spin-off and the delightful Brandon Hardesty version! And the ten million DVD versions.

Posted by a ppcc representative at 18:38