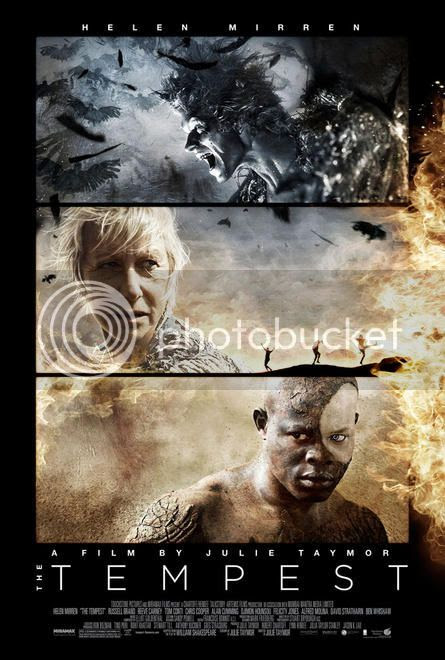 We had been hearing about Julie Taymor's The Tempest for nigh on two years now, ever since Helen Mirren was announced to be playing the role of a female Prospero (called Prospera - catchy!). Imagine our delight and excitement when we learned that they were also adding some of our favorites - Chris Cooper! Djimon Hounsou! DAVID. STRATHAIRN! - to the mix.

However, The (girl) Tempest is a big mess; incoherent and over-the-top visuals coupled with a chopped-up Shakespeare that's barely recognizable. Most people agree (statistic!) that Shakespearean plots don't resonate with modern audiences anymore - twins, shipwrecks, fairies, love at first sight, those wretched proletarian comedy subplots, people being deceived by masks or a pair of pants - ha! We are not so easily duped as those Elizabethan yokels. And that's not why us modern folk usually watch the Bard - we watch it for his epic, fancy talking (so Elizabethan! so complicated! so fancy!). So when you remove the talking, you're left with a lot of silliness. And when you amp up the ridiculous elements with Xena: Warrior Princess-style CGI and loony, masala-style close-ups, the audience (or, at least, the PPCC) feels overwhelmed and eventually alienated. Nothing really could resonate in all that bombastic mishmash.

The plot: Prosper(a) (Helen Mirren), the exiled Duchess of Milan, is living on some random island with her daughter, Miranda (Felicity Jones). She is a great magician, and she uses her dark arts - along with the help of her enslaved fairy, Ariel (a gender-less Ben Wishaw) - to destroy a passing ship in a passing thunderstorm. Onboard are none other than all her political rivals: her conniving brother Antonio (Chris Cooper), King Alonso of Naples (David Strathairn), his brother Sebastian (Alan Cummings) and the kind-hearted consigliere (or somesuch) Gonzalo (Tom Conti). They are all shipwrecked together on one side of the island. On the other side emerges Alonso's son, Ferdinand (Reeve Carney), and - from a third angle - the dim-witted shipmates, Trinculo (a mighty Russell Brand) and Stephano (Alfred Molina). Add the controversial character of Calaban (Djimon Hounsou, in burnt, peely skin) to the mix, and you have the cast. Mostly, the story is about all of them bumping into each other and eventually bumping into Prospera, where they all apologize and Miranda says, "O brave new world! That has such people in it!" The end.

Hacking the text to pieces was really a shame, since so much was lost or garbled - ultimately appearing superficial and daft. Ferdinand and Miranda see each other and are immediately smitten. It's idiotic! OK, that always happens, but here, it's idiotic and inarticulate. This is also a shame, since the cast is really top-notch, and they do quite well given their muted, over-simplified dialogues: Helen Mirren is, of course, amazing in her role, and yes, there is some ephemeral interest in seeing the Prospero-Miranda dynamic become a mother-daughter thing. (It makes the Ferdinand treatment make a bit more sense, at least.) Similarly, Chris Cooper and Alan Cumming do well; while David Strathairn just mopes. Alfred Molina and Russell Brand basically do slapstick, and Djimon Hounsou's interpretation of Calaban is bravely, troublingly close to slave stereotypes. (We've seen productions where Calaban was played as a ghoul-buffoon; here, he's a proud, dignified, angry slave.) Ben Wishaw was fine, though his occasional breasts and lack of genitals distracted.

There were some strange moments, when the music and imagery came together to produce scenes from Dune; we half-expected Helen Mirren to declare, "Yes! For he is the Kwizatz Haderach!" Think fuzzy, reverb-heavy electric guitar slamming down on minor power chords, coupled with epic shots of Prosper(a) standing on cliff precipices.

It's a shame this movie emphasized its million visual ideas (much to its detriment; like the over-stuffed Daywatch) rather than its story or text. Even genuinely striking visuals were lost in the mush; one great moment, for example, was when Ariel explains to Prospera that all the nobles - while given a good scare - emerged scratchless from the shipwreck. In that moment, we see David Strathairn, Chris Cooper, Alan Cumming and Tim Conti suddenly emerge, fully upright, in the rocky ocean, as if the water level itself was decreasing. A quirky, fun visualization of being unharmed! Alas that it was just a brief gem in a messy sea of good, bad and ugly.

Posted by a ppcc representative at 09:35