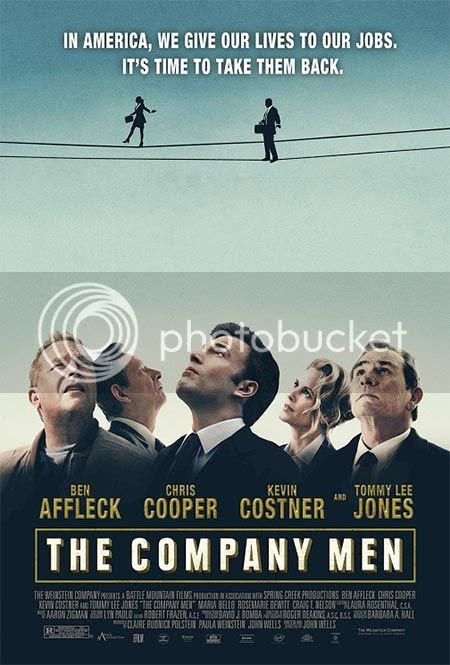 The Company Men is a fairly sober, paint-by-numbers portrayal of America's economic crises, as experienced by three recently-layed off upper middle class corporate suits. Its main value is less in its execution - which is straightforward bordering on bland - than in its peculiarity: you just don't see economics in Hollywood very much these days.

Indeed, that's endemic to American culture: a complete purging of labor issues and economic strife from the collective cultural consciousness. Whoa, did we just sound like Gramsci? Anyway, this film's novelty value, along with the strong cast, merits a viewing. And it's an interesting follow-up to the much more class conscious Look Back in Anger; here too, class is an issue, particularly the appearance of it. A common statistic (fact!) is that Americans tend to over-identify with the middle class: everyone seems to think they're in it, even when many are not.

In The Company Men, the facade of upper middle classness hides crumbling decay as three mid- to upper-level managers are progressively laid off from their cushy corporate jobs. Bob (Ben Affleck) is young and cocksure, but even his budding symbols of success - the huge house, the Porsche, the golfclubs - become a liability when he can't compete with fresh MBA grads, eager and able to work for lower salaries in a race to the bottom. Phil (Chris Cooper) is the old timey American Dream incarnate; a Vietnam vet who worked his way up from the factory floor to the six figure salary. And then there's Gene (Tommy Lee Jones), the heart and soul of the business and, it seems, the only honest businessman left in America (or Boston, at least).

The film's structure and sympathies mark it as very similar to the Italian film, Il posto dell'anima - except the latter, being, well, Italian, focused much more on working class issues in an explicitly Socialist light. But both films explore the decline and decay of manufacturing jobs in a post-industrial West, and both use the triptych of young - middle - old (which could just as well stand for brash - vulnerable - wisdom) characters. Indeed, in both films, the middle character - Silvio Orlando in Il posto dell'anima, Chris Cooper in The Company Men - is set up as society's sacrificial lamb; the guy who did everything right and yet still lost. "My life just ended," Chris Cooper laments, "and nobody noticed." Indeed, Silvio Orlando was the Ideal Comrade Worker - selfless, honest, hard-working, good-humored. He was like a natural extension of Nino Manfredi's Worker Ideal in C'eravamo tanto amati (OK, we just watched that again yesterday, so we had to find a way to get it in here). And yet he still lost. Similarly, Chris Cooper fought for his country, worked in its factories and climbed the ladder, sending his daughter off to a destiny of Ivy League intelligentsia. But in the end, he gets screwed. (That's not to say the film's ending isn't inherently upbeat, promoting the hard-work can-do attitude of pulling yourself up by your bootstraps.)

This focus on the pain of the upper middle class is restrictive, in some senses, but also very contextual; as we said above, most of America identifies with this class. The common laborer - here embodied with a pleasantly low-key, sardonic wit by Kevin Costner as Jack the Carpenter, Bob's brother-in-law - is given a much reduced role. He appears - and is decent, hard-working and honest. But his story is never really told, or even acknowledged.

The cast is uniformly appealing and strong, even if the narrative doesn't allow them much nuance. It was great to see Chris Cooper, who we are most fond of; especially since we've been cultivating a fantasy film in our head starring him as a 1900s Chicago union organizer, David Strathairn as a slaughterhouse laborer and Paul Giamatti as a driven, exploitative yet compelling beef baron. Best movie evar?! You bet. And this one? Decent. Wait for DVD. Cultivate your fantasy Upton Sinclair adaptation instead.


eventually, you will be able to buy the movie here...

Posted by a ppcc representative at 19:32