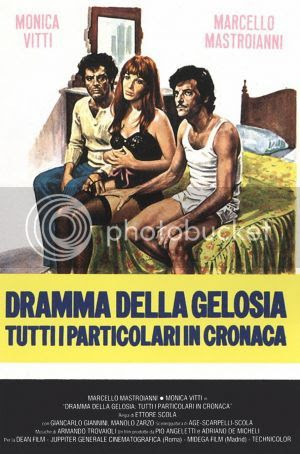 First thing's first: we loved Dramma della gelosia (tutti i particolari in cronaca) (Jealousy drama (with all the details), though its international title was The Pizza Triangle). It was everything we loved about Ettore Scola's other masterpiece, C'eravamo tanto amati, coupled with the zany, sexualized, politicized, over-the-top commedia all'italiana story akin to our favorite Lina Wertmuller movies. In other words, the perfect 1970s Italian film.

The story begins with the fidgety, disheveled Oreste (an amazing Marcello Mastroianni) being asked by the police and lawyers how it exactly happened. Aided by a sad-looking Nello (Giancarlo Giannini), Oreste, Nello and an older man reenact the accidental murder of Adelaide (Monica Vitti) - Oreste and Nello's former lover. There's a bittersweet pageantry to watching everything slow down and seeing the absurdity of this very human drama unfold.

The rest of the film makes us retrace the steps - via Rashomon-like courthouse interjections - of when Adelaide the florist and Oreste the bricklayer met, fell in love, and then met Nello the pizza chef, and fell in love with him too. This love triangle, and the three's extremes of ultimatums, aborted polyamory, attempted suicides and - yes - lots of jealousy and hurt feelings, make up the rest of this strange, touching film. In the vein of Ettore Scola's other PPCCed film, there is a heavy air of surreality (lots of fourth-wall breaking) coupled with compassionate humanism. It all seems so silly and forgivable in hindsight. Also, as per C'eravamo tanto amati and Lina Wertmuller's films, the Italian Left is a prominent supporting character, and the downtrodden, working class Oreste and Nello even meet after getting beat up by the police at a march. Like the bourgeois "padrone" in C'eravamo…, the rich Roman is again portrayed as fat, dull-eyed and very ignorant (played here by the hulking Hércules Cortés).

What was interesting about this film - and called to mind Giancarlo Giannini's later golden years in skeezy picaresque tales like Pasqualino Settebellezze and Mi manda Picone - was its high levels of "zozzeria" - that is, scumminess. The setting is Rome, but the city looks disgusting, and the characters frequent dumps, housing projects and ugly highways. Oreste is hounded by an enormous fly, and his entrances are signaled by loud buzzing. He twitches, his hair is greasy and his clothes are mismatched. In one of the most hilarious scenes, Adelaide attempts to list his pros and cons; when she gets to the cons, she admits, "And you're not very hygienic. Remember that one night? You even made a sound." Oreste and Adelaide meet when he falls asleep on a pile of paper and debris. They frolic on a polluted beach, have a picnic at the dump.

The script successfully juggles tenderness with a sharp wit; we found ourselves laughing often, even if it was so sad. And some of the lines were great! Example: when Adelaide first spots Oreste snoozing on a trash heap at a Communist fair (they have those, I guess?), she hops off the swings and goes to wake him with a kiss. They're both a little drunk and unsteady, and when he wakes, he looks at her, thinks for a bit, and says, "You lost a bet." What a first line! Or a wonderful scene when Adelaide seeks the aid of a therapist: "So what's the diagnosis? I'm traumatized, I've had a shock? It's a neurological disorder? Or am I a whore?" The therapist cuts in quickly: "Let's not get into scientific jargon!"

The most impressive of the cast was Marcello Mastroianni, who was playing heavily against type. We wouldn't have believed that Mastroianni would have been able to shed his dashing, Everyman persona to become someone as decrepit and bizarre (and Roman) as Oreste. The details of his performance - the tic around his eyes; his stubbed, broken fingernails; the general air of decay and hobo-ness - was amazing. In fact, we were so amazed that we had to check if he won anything for this; and he did! Best Actor at Cannes!

Giancarlo Giannini, our other favorite, was also playing heavily against type. Whereas he usually occupied the role of the wild-eyed, unhinged and in love laborer (see Wertmuller's Mimi metallurgico ferrito nell'onore), here he was young, upbeat and oddly tween heartthrob-esque. He was also playing a Tuscan, and the accent was awesome.

Monica Vitti's best moments were definitely the swings between carefree, joyous hedonism and the wracks of self-doubt. In fact, the latter almost seemed satirical of typical soap opera femininity (as was much of this film's treatment of sexual mores and gender norms in general). Yet, as with the writing and everything else, even when things bordered on satirical, they never lacked sympathy.

Highly recommended.
Posted by a ppcc representative at 19:09

Ok I'm not a fan of Italian cinema (I fell asleep while watching La Dolce Vita and never finished the film) and I'm not a fan of Marcello but you certainly gave me enough reason to give this one a try, thanks.

A really good review. I watched this film as a kid and have been chasing after it ever since. Do you know how I can get hold of a copy to buy?

izabela - I buy most of my Italian films from dvd.it. Here's the site for Dramma della gelosia.