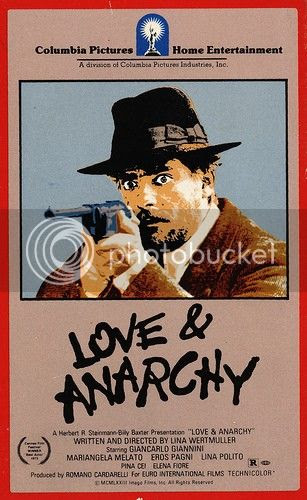 Good God. Careful with Film d'amore e d'anarchia, ovvero stamattina alle 10 in via dei Fiori nella nota casa di tolleranza... (A film about love and anarchy, that is, this morning at 10 o'clock in Fiori Street, in the well-known whorehouse...; but more often, Love and Anarchy) - it's intense as hell.

It's also very good, and probably Lina Wertmüller's most gripping, gut-wrenching film. Stripping away all the bizarre humor that lightened and spiced up her later hits, Film d'amore e d'anarchia is a straight, sober look at one of Italy's most terrible periods: the rise of Fascism in the 1920s. We follow a few days in the life of the freckle-faced, wide-eyed country boy, Tonino (Giancarlo Giannini), who has come to the big city with plans to assassinate Mussolini. He's taken in by an anarchist prostitute, Salomè (Mariangela Melato). The whorehouse is a bawdy circus, full of sex jokes and impromptu guitar singing. Tonino, visibly out of his depth, is taken in by the prostitutes, who protect him and bicker over him and mock him. Eventually, he falls in love with the equally young Tripolina (Lina Polito).

But, even amidst this atmosphere of fun and frolic, the clock is ticking. The long shadow of Fascism looms, and things become increasingly edgy as the date of the assassination approaches. This slow crescendo of tension builds and builds, creating a sense of terrible foreboding.

A number of films have shown the quotidian nightmare of Fascist Italy: Una giornata particolare explored the day Mussolini and Hitler met in Rome, as seen via two "outsiders", played by Marcello Mastroianni and Sofia Loren, stranded in a deserted suburban apartment building. Roma città aperta and General della Rovere explored wartime, occupied Italy. Film d'amore e d'anarchia fits neatly into this subgenre, in that - like Una giornata particolare, we experience the city under Fascist rule: and it's alien, ugly, oppressive. We see extensive shots of Mussolini's planned communities, such as EUR, with their enormous, repressive architecture. The streets are all empty. Everyone seems unfriendly and on edge.

Also, like Roma città aperta and General della Rovere, Fascist power seems unconquerable, terrifying. The feeling of initial resistance followed by deep fear ("I'm shitting myself," Tonino repeatedly quails. "You can't imagine how scared I am.") followed by absolute desperation is perfectly captured in these films. Indeed, we spent much of the film anxious and upset, almost unable to watch it to the (inevitable) sorry conclusion. This isn't the post-war world of C'eravamo tanto amati, where the partisan fight - having been won - is suddenly seen as nostalgic and noble. Instead, this is narrow, terrifying insecurity. Indeed, that feeling of pervasive terror lingers - we still feel it now, having just finished the film, and we're reminded of another Antonio, the relatively luckier resistance fighter played by Nino Manfredi in C'eravamo tanto amati, who has a great few lines about it:


Listen, Luciana: when you've risked your life with someone, you remained attached to them. It's as if time doesn't pass, and that person could still save you. As if we're not out of danger yet.

Posted by a ppcc representative at 22:32

Way too many intense Italian movies but its all very lovely though.
The Bollywood is missing or you could take a detour into Bangla cinema too.